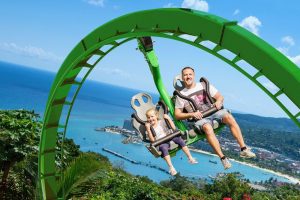 Unlike most parks, Mystic Mountain did not furlough any of its permanent staff, even though it closed to the public on March 12, 2020. Despite the shutting down of operations, the park spent about $20,000 a day in order to be able to be able to complete the project and reopen safely. As part of those protocols, Mystic Mountain will only be allowing a quarter of the park’s capacity or 700 people each day – 350 in the morning and the other half in the afternoon. Additionally, Mystic Mountain will only be open to locals in the coming weeks and not for tourists.

Raggamuffin is a Wie-Flyer suspended coaster built by German manufacturer Wiegand, who also built the park’s Bobsled Ride alpine coaster that opened in 2008. Although no stats for Raggamuffin have been released and each Wie-Flyer is custom made, they generally have a top speed of approximately 25 mph (40 km/h).

Here’s a construction video and off-ride video the park posted on their Facebook page to give you a better idea of what the ride looks like since the photo above is a promotional rendition.