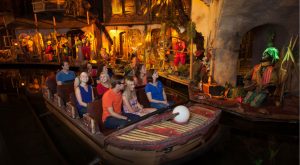 July 28, 2020 – The Piraten in Batavia dark water ride reopened after a huge fire destroyed it, as well as most of the Holland and Sweden themed areas of the park, in 2018. The new 1.7 acre (7,000m²) indoor boat tour features 88 animatronic pirate characters, eight of which survived the blaze and were restored from the original ride.

Park officials say a high double-digit million Euro amount was invested in the ride’s restoration, which took only two years to complete. “After the big fire, it was about overcoming numbness from the shock,” said park owner Roland Mack. “The tremendous response has given us enormous support.”

During the massive inferno  on May 26, 2018, restaurants, shops and the original like-named Mack Rides attraction that opened in 1987 were destroyed. According to the public prosecutor, the major fire had arisen from a technical defect and caused millions of Euros in damage. Around 500 firefighters were deployed, seven of whom were slightly injured extinguishing the blaze. There were around 25,000 visitors at the theme park that day.

See what our members are saying and the reconstruction process in our Forum discussion.