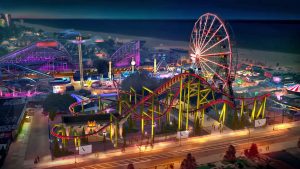 December 21, 2020 – After being closed for the iconic Ferris Wheel’s 100th Anniversary year due to COVID-19, Deno’s Wonder Wheel Amusement Park will be adding a two new roller coasters in 2021. The appropriately named Phoenix will rise 68 feet (21m) over the famous Coney Island boardwalk, reaching speeds up to 34 mph (55 km/h). The Vekoma family suspended coaster will be joined by a SBF VISA spinning figure eight kiddie coaster called Skyflyer.

“It’s an important time to rebuild,” Deno “DJ” Vourderis, a third-generation member of the family that owns and operates the park, said on Social Media. “We’re betting on the future of New York City and Coney Island.”

Deno’s, which operates dozens of kiddie rides that sit between the Wonder Wheel and the boardwalk, purchased a run-down corner of Coney Island’s amusement district in January that was formerly operated by 12th Street Amusement, which shuttered roughly two years ago, leaving the half dozen carnival flat rides there to rot. Everyone, except the Deno family, expected a few of those rides to be refurbished along with some others similar to the the Spook-a-Rama ride they purchased with the Ferris Wheel in 1983. No one saw this coming.

Both new rides will be the park’s first new coasters since the Sea Serpent kiddie coaster opened in 1999 and will be half of four new coasters opening at Coney Island next year. Zamperla, the owner/operators of neighboring Luna Park and its Thunderbolt and historic Cyclone coasters, will also be opening one of their mini mouse and J2SK junior coasters as well as a Super Log Flume and an interactive water ride called Big WaveZ.

The historic amusement area housed no less that three amusement parks – Steeplechase Park (1862), Luna Park (1903), Dreamland (1904) – at one time, as well as dozens of roller coasters. It welcomed millions of visitors during its heydays, but all three burned down in the great fires of 1911 (Dreamland), 1944 (Luna Park) and 1946 (Steeplechase Park). Although Astroland opened on the former Luna Park site in 1962, it failed to capture the public’s imagination and closed in 2008.

The new Luna Park opened in 2010 and has expanded every year since, although part of that expansion couldn’t open this year due to coronavirus restrictions. Now with Deno’s expansion and the MCU Park baseball stadium, that opened on the former Steeplechase Park site in 2001, the entire amusement area is filled anew and the future of Coney Island shines bright again.

See what our members are saying about the new coasters in our Forum discussion.