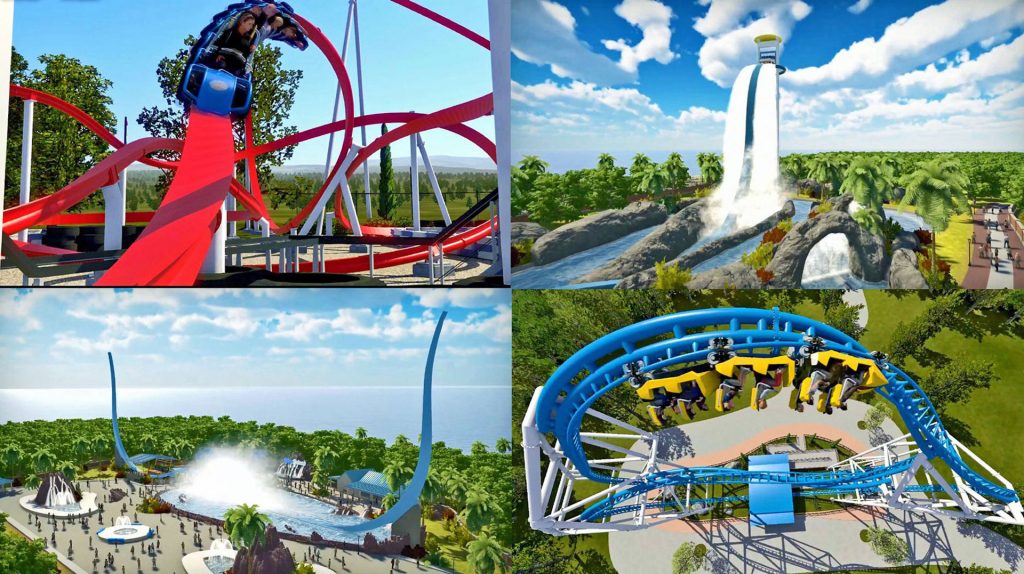 July 23, 2020 – World renowned roller coaster and thrill ride manufacturer Intamin Rides revealed four new ride concepts. The new concepts include a single-rail launch roller coaster, a vertical launch coaster, and two water rides. This brings the total number of  coasters in Intamin’s portfolio to 26 different models, which is one of the largest and most diverse ranges in the world.

The new concepts have been unveiled ahead of the IAAPA Virtual Asia Expo due to take place next week, which will certainly attract attention amongst theme park operators. They definitely drew the attention of enthusiasts, but not in the way one might think.

The four new concepts are as follows:

Hot Racer is a single-rail roller coaster that offers racing or dueling layout, multiple launches and an in-line seating style. Hot Racer comes in three different “off the shelf” models called Overdrive, Infinity and Autodrome, with each model offering a different experience. The information pack states the models my be made higher or faster meaning customised versions are possible. Coaster fans have noted the close comparison of Hot Racer’s design to Rocky Mountain Construction‘s “Raptor” track on Wonder Woman Golden Lasso Coaster at Six Flags Fiesta Texas and RailBlazer at California’s Great America.

The Infinity version will be the world’s most compact racing coaster with 1083 feet (330m) of twin race track featuring the world’s first double 360 vs s-hump. The Overdrive model features a compact race course with a double launch, 1778 feet (542m) of track and the world’s first Wallride dive, which is similar to RMC’s Wave Turn. The Autodrome variation features 2 launches and 2 boosts during 2 laps and a world record 20 dueling moments for 75 seconds of race time over 3343 feet (1019m) of track. This version also highly resembles Premier Ride‘s West Coast Racer at Six Flags Magic Mountain.

Intamin claim that their LSM Vertical Coaster is the “most compact launch coaster in the world” and has the “strongest launch on the market”. The coaster offers both forward and backwards launches. The layout features the world’s first upside-down launch and the world’s first Zig Zag loop and has a single or double cycle option. It will also have a Torpedo Dive inversion before a high-g station pass through at 65 mph (104 km/h). And it bears a striking resemblance to S&S Worldwide‘s GaleForce at Playland’s Castaway Cove on the Jersey Shore as well as Premier Ride’s Sky Rocket II coaster type clones like Tempesto and Tigris at the Busch Gardens parks in Virginia and Florida.

The Ultra Splash is a shuttle style coaster with a large water splash feature. The ride vehicle is triple-launched using a LSM launch. Intamin state the ride can be heavily themed and utalise customisable elements, such as water bombs and water jets. This one uses a huge single-rail track first seen on RMC’s T-Rex coaster concept and stands 121 feet (37m) tall with 90° drops and a top speed of 58.5 mph (94 km/h). However, the resemblance to Mack Rides‘ PowerSplash model, like Pulsar at Walibi Belgium, is undeniable.

The final big reveal is the Giga Splash, a water ride with a swanky lift to get the boats to the top of the drop. The name “giga” does not reflect the height as traditionally used when referring to some giga coasters. Intamin has used the term to differentiate between their similar Ultra Splash model mentioned above. So it stands 131 feet (40m) tall with a 285° panoramic elevator lift and sends riders down a 87° drop, reaching speeds up to 62 mph (100 km/h) over an airtime hill into a huge splash zone. All that with a 673 foot (205m) interactive water channel to help build the tension before boarding the lift.

Unlike the three above that many consider knock-offs of other manufacturer rides, this one resembles the company’s own Shoot-the-Chutes water ride like the record setting Pilgrams Plunge that was at Holiday World from 2009-2013 and the ill-fated Perilous Plunge at Knott’s Berry Farm (2000-2012).

Read what coaster fans think of these new concepts on our forums.