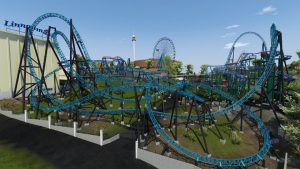 March 22, 2018 – Linnanmäki Amusement Park, located in the heart of Finland’s capital Helsinki, today announced the addition of a new coaster to their lineup in 2019. Taiga, a steel coaster from Intamin AG, will be the tallest and fastest coaster in Finland, with a height of 170.6 feet (52 m) and a speed of 65.9 mph (106 km/h). These stats will also make it the second tallest and fastest coaster in the Nordic countries, barely beaten by Wildfire at Kolmården in both categories.

Taiga will feature two LSM launches and four inversions across its 3,622 feet (1,104 m) of track. It will replace a Premier Liquid Coaster known as Vonkaputous, whose removal was announced at the end of the 2017 season. Over the past few weeks leading up to the announcement, Linnanmäki had posted teasers of the new ride on social media, but the theme park community suspected a new coaster was afoot already when a concept video from S&S was leaked to the Internet in February 2017. The video, which was quickly removed, showed a concept of a coaster with a similar layout to Taiga, located in the same spot in the park. This led to speculation that the new coaster was to be built by S&S, but has later been believed to be S&S’ tender for the ride contract, which was ultimately awarded to Intamin.

Read more about Taiga and the early S&S leaks in our Forum Discussion.