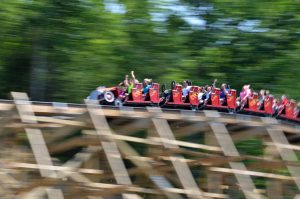 September 25, 2020 – Dollywood shutdown their Lightning Rod roller coaster for the remainder of the 2020 season in order for RMC (Rocky Mountain Construction), the ride manufacturer, to make necessary changes to the attraction. The launched wooden coaster has been plagued with problems ever since it opened in June, 2016 and suffered from multiple extended down times that lasted from days to weeks at a time.

Lightning Rod is a prototype coaster featuring the first-of-its-kind uphill LSM launch, which is believed to be the cause of the troubles by many, but not confirmed by the park or manufacturer. After many attempts to make the ride more reliable, including lowering the hill crest speed, RMC removed the Hot Rod themed zero car (pictured) to reduce the coaster’s downtime.

Instead of using known LSM launch specialists like InTraSys or Indrivetec, RMC went with Velocity Magnetics, a company well known for magnetic braking systems but has never done an LSM launch before. Whether the system needs to be replaced or is not the underlying issue is unknown, but it likely won’t be long until work begins and we get to see what’s actually being fixed.

See what our members are saying about the closure and follow the changes in our Forum discussion.