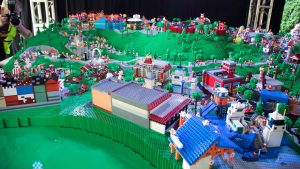 October 2, 2019 – It’s been over three years since planning began and today Legoland New York announced that the brand new park will be opening on America’s Independence Day holiday, July 4th, 2020. With more than 50 rides, shows and attractions across seven themed “lands”, the park also confirmed that it will be the largest Legoland park in the world. Those lands include Lego Ninjago World, where aspiring young ninjas can put their training to the test on Ninjago: The Ride and help defeat the Great Devourer using only their hands as weapons; Knights’ Kingdom, home to Lego Castle and the Zierer Dragon Coaster; Pirate Shores, where adventurers can take a voyage on a swinging Zamperla Galleon and splash battle on Rogue Wave Riders; and Miniland, which is the heart of every Legoland park with a massive display of Lego-built cities.

“Our Park is in high gear and we’re on track for opening,” said Legoland New York Senior Divisional Director John Ussher. “Buildings are going up, concrete is being poured and construction is buzzing across our site. Ride components, such as the track for our Dragon coaster, are arriving in Goshen to be installed. Our Lego models, more than 15,000 of them, are being shipped to our site from Merlin Magic Making workshops all over the world.”

Details about Grand Opening celebrations will be announced in 2020, Public Relations Manager Matt Besterman said. “The opening of the first major theme park in the northeast in decades is a once-in-a-lifetime event, and you can be sure we’ll throw a star-spangled party to celebrate it!”

Located approximately 65 miles north of New York City, the park will also feature a 250-bedroom Lego themed hotel where every room will be themed to a popular Lego toy.

See what our members are saying about the new park in our Forum Discussion.