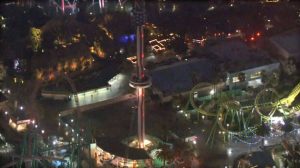 December 30, 2016 – Twenty-one people were stranded aboard the Sky Cabin at Knott’s Berry Farm for over seven hours when the rotating passenger gondola got stuck 125 feet (31m) above ground. The attraction stalled around 2pm local time and after several attempts to lower the ride, Orange County firefighters were called to the scene three hours later. All 20 guests and the ride operator were safely on the ground by 9:54pm.

The fire department rescuers appeared to access the top of the observation tower through its central hub and from there rappelled down to the passenger cabin. The guests, seven children and the rest adults, were harnessed to firefighters and lowered with ropes one by one to the ground. No injuries were reported.

There was no word on what caused the breakdown. Knott’s Berry Farm said the Sky Cabin would be closed until further notice and an investigation into the cause was complete.

Read more with links to news articles and videos in our Forum discussion.