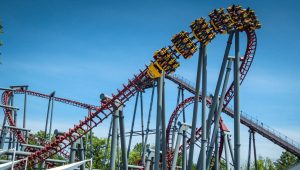 September 27, 2018 – Kings Island has announced that Firehawk, the park’s Vekoma Flying Dutchman flying coaster, will be removed at the end of the 2018 season. Its last days of operation will be during the final weekend of Halloween Haunt and The Great Pumpkin Fest, October 26-28. Although no reason for the removal was given, it’s widely assumed that it’s to make room for a new coaster next year or in 2020.

Firehawk originally opened 0n May 26, 2001 as X-Flight at Geauga Lake in Aurora, Ohio before being relocated to Kings Island in 2007. The closure leaves only two Flying Dutchmen coasters still in operation – Nighthawk at Carowinds in Charlotte, North Carolina and Batwing at Six Flags America near Washington DC.

Vekoma’s Flying Dutchman was the first flying coaster where riders are loaded into the cars facing backwards, and before dispatch, the trains are tilted backwards into the lay-down position. At the top of the lift hill, the trains performed a lie-to-fly element built into a 180° turn, flipping them into the flying position.

See our members’ reaction to this announcement in our Forum discussion.