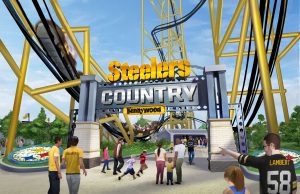 July 19, 2018 – Kennywood Amusement Park announced their new coaster for 2019, an S&S steel coaster called Steel Curtain. The coaster is built in collaboration between Kennywood and the local football team Pittsburgh Steelers, and shares its distinct black and yellow color scheme.  With a height of 220 feet (67m), Steel Curtain will be the tallest coaster in Pennsylvania, and its 197 feet (60m) first inversion will be the tallest in the world. Steel Curtain will be the centerpiece of a new area of the park, called Steelers Country, which will be dedicated to the Pittsburgh Steelers. The area will also feature a handful of other attractions.

Including the aforementioned world’s tallest inversion – a so-called “fake out inverting drop” coming right off the lift hill –  Steel Curtain will feature nine inversions, more than any other coaster in North America. It will reach a speed of 75 mph (120 km/h) and become the fourth coaster in Pennsylvania to do so, sharing the title of second-fastest coaster in the state behind Phantom’s Revenge, which is also found at Kennywood. With a track length of 4000 feet (1219m) it will be the second longest ride at the park, this time behind the Möbius coaster Racer.

Aside from the sponsorship and the color scheme, the name Steel Curtain is another nod to the Pittsburgh Steelers. The term was coined in the 1970s referring to the impressive defensive lineup of the football team, which helped them win the Super Bowl four times between 1974 and 1979.

The announcement of Steel Curtain was preceded by an intriguing teaser campaign that sparked heavy speculation among enthusiasts. Read our members’ predictions, and their reaction to the announcement, in our Forum discussion.