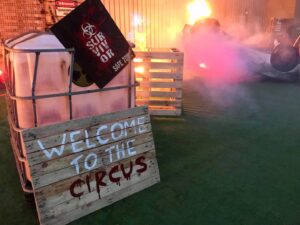 October 10, 2021 – Journey To Hell Freak Nights is a terrifying experience led event through themed areas in Blackpool Pleasure Beach after the park has closed. In a break from typical theme park events where guests freely explore a park and experience attractions as they please, Journey To Hell is a linear, one-way journey of the park along the midways, through normally off-limit backstage areas, and on several attractions. All the while, unsuspecting guests don’t know who – or what – is lurking beyond the darkness, around the next corner or behind the next door. Spoilers follow, so if you want the surprise, please leave this page now and we hope you have a spooky time! Read on if you’re not bothered about spoilers…

The event starts in The Hub, where the MC sets the story; a clown died at the Pleasure Beach one hundred years ago and is said to be causing all sort of scary antics after dark. Just as well there’s an opportunity to grab a burger and beer in the Hub because it might be your last meal!

Guests start by boarding The Legend of the Cursed River Caves, which is is basically the regular ride with no music and the lights off. The anticipation of being on this boat ride with no escape is an unsettling experience, especially as scare actors jump out and scream at several points. More could’ve been made of this, especially as it’s the opening chapter in the story. Perhaps some mist, light effects, creepy circus music, or maybe some gruesome things on the staged areas would have helped? 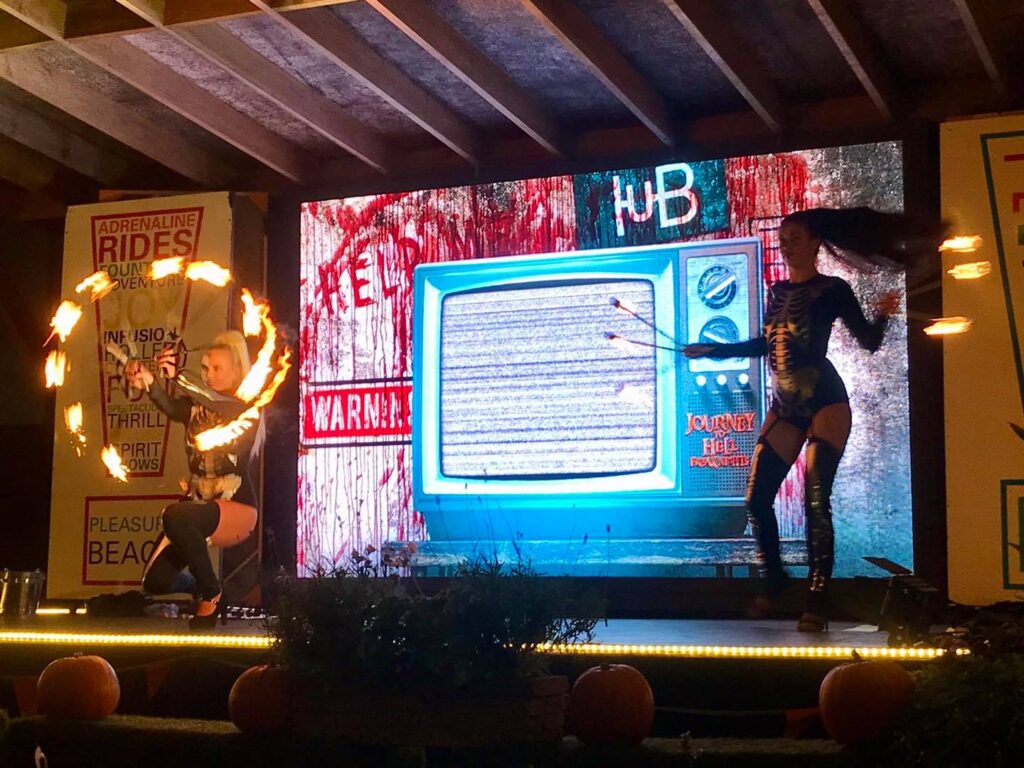 After leaving the ride, guests are shepherded through the backstage areas of the River Caves building into the Hell Tunnels. For those who adore Blackpool Pleasure Beach and have an interest in how things work, this is a highlight from an enthusiasts perspective! Wandering through what seems like an endless labyrinth of dimly lit corridors, there’s plenty of unnerving tension as scary things appear, music plays and, of course, scare actors add to the atmosphere. Although nothingness can build tension like the River Caves, a few additional special affects might have made upped this a notch or two. One particular scene involves a “chef” cutting up a body and then waving a “foreskin” under your nose stating this is where all of the park’s food originates, which is well executed. It’s worth acknowledging that the transformation of the Pleasure Beach from a family friendly place during the day into an adult environment at night is fantastic. It’s rude, it’s sexy and, at times, vulgar. Which is fab. Playfully being told by a witch to “get a f*cking move on” is really entertaining in the context of the event.

Guest are curtly (in an amusing way) jostled to the next attraction – The Pledge – which is housed in the old Black Hole building. What follows is a Tim Burton-esque scene with a seamstress who makes circus costumes out of body parts and she does get a kick out “measuring up” the men! What follows is a magic act. The timing seemed a little out and the whole group felt a little bewildered when the scene ended. The seamstress scene built up the magic trick, but it didn’t pack any scary knockout blows. Most left The Pledge a tad puzzled. But that was soon forgotten. 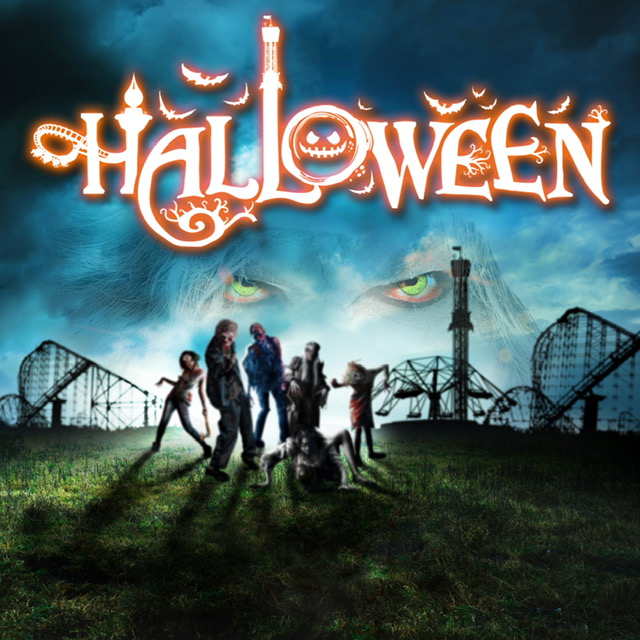 Ghouls herd the group to the next attraction, Blind Faith. Icon. In the dark. Yes, a ride on the Pleasure Beach’s newest coaster at night. To add to it the experience, riders were offered a blindfold. At this point, the storyline about the clown/circus seemed to disappear, but who cares? Icon! At night! If one coaster wasn’t enough, The Big One played the next part as The Big Dark Abyss. Again, the storyline is out the window. It’s all about riding the coasters at night. Although it could be said that the great view of Blackpool’s illuminations from the top of the lift hill before the train plunges down the drop represents the decent from the bright lights of life to the dark depths of Hell…? 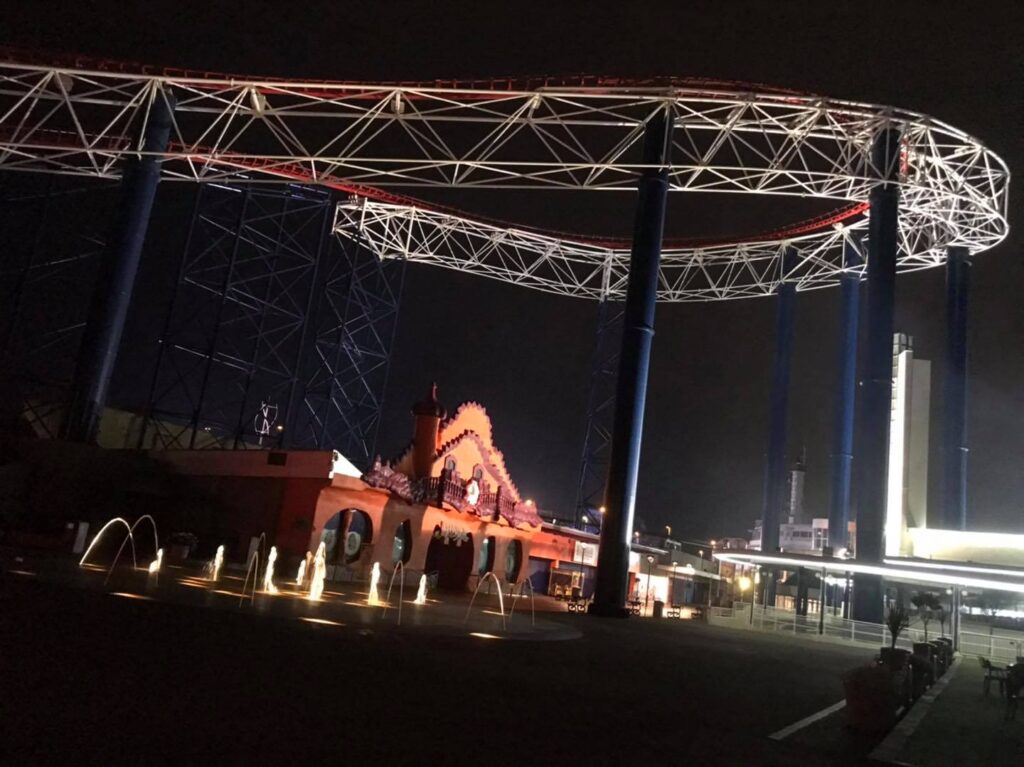 After leaving The Big One, guests pass the Carousel which, as a nice touch, is playing haunting music and moving without riders. The next stop is Scare Maze. The Chinese Puzzle Hedge Maze has been spooked up with webs, scarecrows and a load of actors. Behind almost every turn is something or somebody to make guests jump. Blackpool Pleasure Beach have made good use of the existing attraction and, after the two coaster rides that seemingly disjointed the event story, it nicely brings it back in line. When they’ve escaped, riders pass through the area beside Avalanche where they finally meet the circus freaks, bringing the 80(ish) minute experience to an end. Being Halloween, the Ghost Train is open for traditional scare attraction send off. 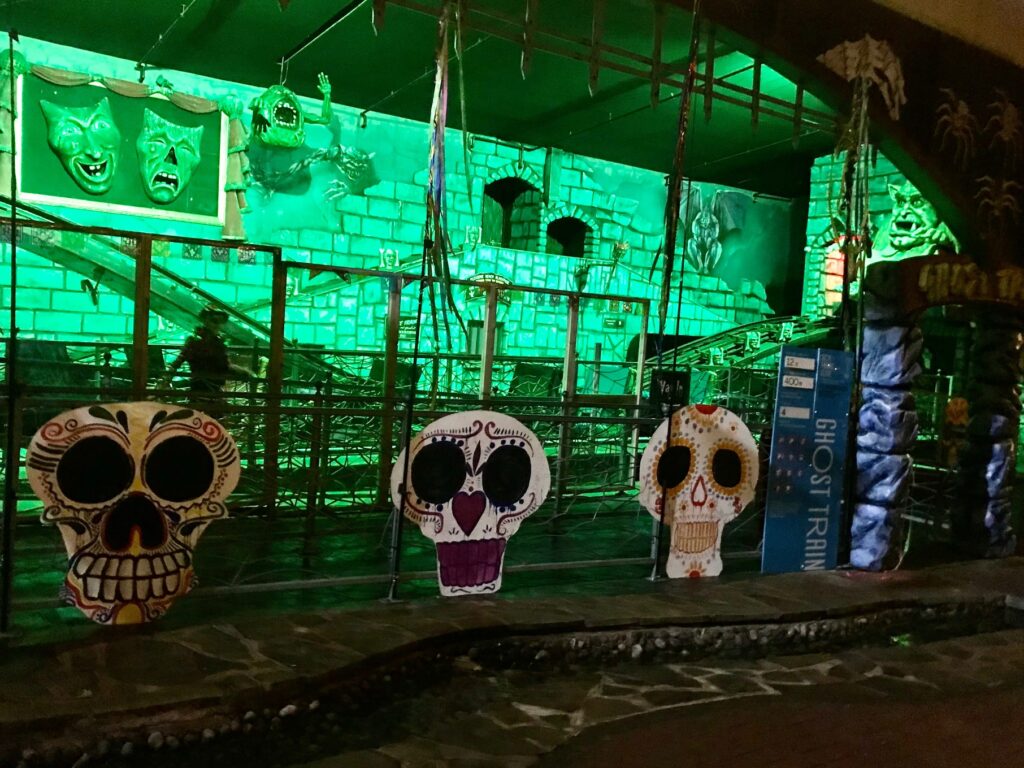 When the Pleasure Beach run the event next year, if they add a few extra effects, tighten up the storyline and supplement the connecting areas with extra actors, Journey To Hell could possibly be the most frightening park event. The concept of Journey To Hell is brilliant. What’s not to like about traversing the Pleasure Beach after dark, going backstage, riding some of the best attractions, and having the experience punctuated with scary moments?! Journey To Hell runs on selected nights until the end of October. You can book your tickets on the Blackpool Pleasure Beach website.