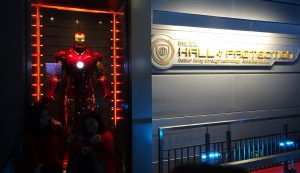 December 17, 2016 – This weekend season pass holders were given a preview of the new Iron Man Experience at Hong Kong Disneyland that is scheduled to officially open on January 11, 2017. The much anticipated 3D motion simulator ride is the first Marvel themed Disney attraction and employs the newer generation model of the Advanced Technology Leisure Application Simulator, currently used on the popular Star Tours-The Adventure Continues 3D simulators found at other Disney parks.

The $100 million attraction is located in the Tomorrowland section of the park, in an area named Stark Expo where Tony invites the visitors aboard the Iron Wing for a tour of Hong Kong, including the newly constructed Stark Tower. However, Hydra launches an attack on the city, forcing Tony to don the Iron Man armor and fight the menace alongside the Iron Wing.

Read a report with lots of photos of the preview in our Forum discussion.