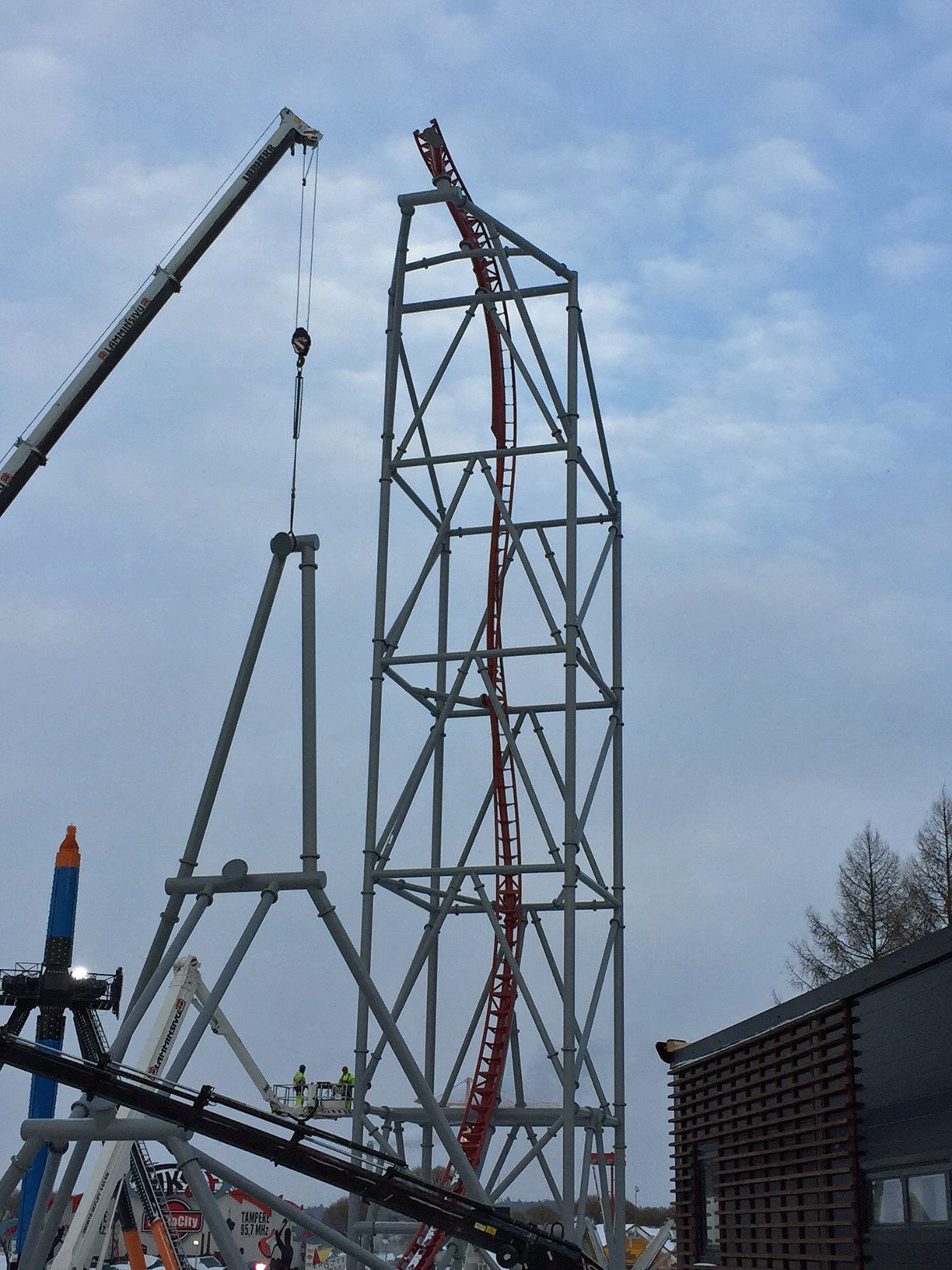 March 1, 2017 – Average high temperatures may be ranging from 14º – 18º Fahrenheit (-10º to -8º Celsius) in Finland, but this doesn’t stop the Hype from building up! Named “Hype” by Särkänniemi Amusement Park, the Premier Rides designed and manufactured Sky Rocket II roller coaster is the first high-tech, triple-launched coaster experience in all the Nordic Region!

Hype, which had been kept a secret by Särkänniemi, was just announced as the first pieces of massive steel were erected on the job site. Baltimore, Maryland based Premier Rides has spent the last year designing, manufacturing and shipping the ride equipment to the park and is now onsite to assist with the installation.

“We selected Premier Rides because we wanted to make a major statement and to create a signature experience at Särkänniemi Theme Park that will be appreciated by our loyal guests,” Managing Director of Särkänniemi Miika Seppälä said. “Hype is just that. The collaboration with Premier Rides has allowed us to produce something that will be truly iconic for the park.”

“Hype represents the world’s current trend in amusement parks:  speed, acceleration, and impressive look,” Director of Development Ville Aarresuo added. “Because of this it will be one of the most interesting landmarks in our region.”

“All of us at Premier Rides are so honored to have teamed up with Särkänniemi to deliver an amazing roller coaster,” commented Jim Seay, president of Premier Rides. “Hype incorporates our newest technologies including our most advanced magnetic launch system that will create the Nordic Region’s first triple-launch experience and the highest inversion in the region as well!

“Premier is especially proud that the ride is already going vertical and will be able to open on schedule which will allow thrill-seekers to see what the Hype is all about! Exceeding expectations means a lot to Premier!”

Hype is the first new roller coaster at Särkänniemi in nearly a decade, and is the largest investment in the park’s history. The triple launch coaster is based on the award-winning Superman Ultimate Flight located at Six Flags Discovery Kingdom in Vallejo, California. Hype has the most current launch system technology available in the industry. With the exception of the coaster train itself, there are virtually no moving parts on the ride which makes the attraction very reliable and maintenance friendly.

The riders are first shot out of the station up to a height of 50 feet (15m).  Gravity pulls them rapidly back into the station where the guests are launched backwards up to a height of 100 feet (30m). Again gravity takes control and brings the train once more back into the station where the final launch is energized and the riders shoot up a vertical twisting track to the highest point on the ride where a tantalizing slow roll places the guests upside down approximately 150 feet (50m) in the air – a record for the Nordic Region. After executing the roll, guests enter a face-first vertical drop, ending in a twisting loop where riders will experience exciting Gs. The riders then drop toward ground level where the train once more shoots through the station and then is smoothly braked using magnetic technology as it comes to a stop in the station.

Read more about Hype in our Forum Discussion.