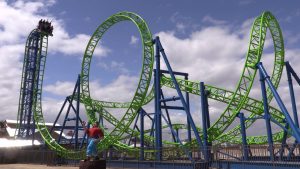 May 6, 2017 – Casino Pier on the Jersey Shore opened Hydrus, the seaside resort’s Gerstlauer Euro-Fighter that replaces the infamous Star Jet coaster that ended up in the Atlantic Ocean following Hurricane Sandy in 2012. It features a 72 foot (23m) tall vertical lift hill, a 97° beyond vertical drop, three inversions and a top speed of 45 mph (72.5 km/h).

“The icon of the old roller coaster being in the ocean will now be forgotten,” said Seaside Heights Mayor Anthony Vaz. “It’s a new beginning – a revival of the whole community.”

The coaster is a modified 320 model like Untamed at Canobie Park in New Hampshire, Rage at Adventure Island in the UK and Falcon at Duinrell in the Netherlands, with the final helix removed in order to accommodate its placement on the pier.

In addition to the new coaster, the pier also added a 131 foot (40m) tall Technical Park Ferris Wheel for the 2017 season, which will be opening within the next week or two.

Read more and view lots of photos and videos in our Forum Discussion.