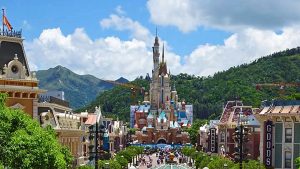 June 18, 2020 – Hong Kong Disneyland Resort reopened at reduced capacity the day following train service via MTR resumed. During this phase, members and ticket buyers must use a new online reservation system to book their visit at least seven days in advance. Guests are also required to adhere to safety guidelines, including filling out a health declaration form online, temperature screening at the entrance, social distancing rules on queues and mandatory face masks.

The coronavirus outbreak prompted Disney theme parks around the world to close temporarily. The resort in Shanghai was the first of its dozen parks to reopen last month, but restricted its daily capacity to a third of its normal 80,000 visitors, admitting 24,000 guests on its first day.

Disney shut the parks in Shanghai and Hong Kong before the Lunar New Year holiday in January, as the virus outbreak intensified. It closed its parks in Tokyo in February, and its parks across the United States and Paris in March. They remain closed until further notice.

Without counting the loss from the closure, Hong Kong Disneyland previously revealed its losses had doubled to $13.4 million in 2018-19 because of the city’s anti-government protests, which were sparked by the now-withdrawn extradition bill.

Separately, Peak Tramways has postponed the second phase of its upgrade to the popular tourist resort, which was planned to begin this fall, to next year. The project is expected to take five months, during which services on the funicular will be suspended. The first phase of the project was completed last year .