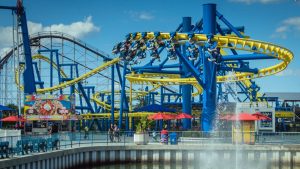 March 22, 2020 – While parks like Six Flags Great Adventure, Lagoon, Dollywood and Silver Dollar City announced further delays until at least May for their re-openings, the Fun Spot America parks in Orlando and Kissimmee along with their sister park in Atlanta, Georgia finally gave in and joined the rest of the USA’s parks by closing their doors to conform to social distancing recommendations. The Gold Coast parks in Australia – Dreamworld, Sea World and Warner Bros. Movie World – also ended their holdouts and shuttered their gates as well, leaving Gold Reef City in South Africa as the only major park in the world still operating.

Orlando’s International Drive attractions Madame Tussauds Orlando, Sea Life Orlando Aquarium and the Wheel at Icon Park are also temporarily closing due to the spread of the coronavirus pandemic, however Orlando Starflyer, the world’s tallest swing ride, remains in operation.

And a week after their parks closed to the public, Disneyland halted construction on Mickey and Minnie’s Runaway Railway dark ride as well as the Avengers Campus themed land at Disney California Adventure.