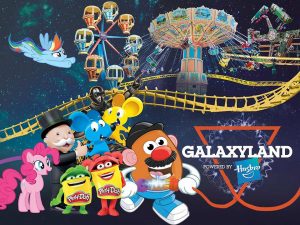 19 December 2019 – Toy giant Hasbro and the largest shopping mall in North America, West Edmonton Mall, announced a partnership to retheme Galaxyland. The park will be re-branded as “Galaxyland powered by Hasbro” making it the first Hasbro theme park in Canada. The existing attractions at the park will be rebranded to Hasbro’s wide ranging portfolio of toys such as My Little Pony, Mr Potato Head, Monopoly, G.I. Joe, Nerf, Play-Doh and Operation.

“Galaxyland has been providing entertainment to locals and visitors from around the world for more than three decades, and we’re thrilled to bring a number of exciting rides and activities themed to many of Hasbro’s iconic brands,” said Matt Proulx, Vice President of Location Based Entertainment, Hasbro. “When ‘Galaxyland powered by Hasbro’ officially opens, we’re sure that fans and families will get to experience their favorite brands like never before.”

“We are delighted to welcome Hasbro to Galaxyland. Both of our brands represent dynamic family fun and ‘Galaxyland powered by Hasbro’ will combine our amazing rides and attractions with Hasbro’s loved and well-known brands to produce a first-class Entertainment destination.” Said Danielle Woo, General Manager of West Edmonton Mall.

Reconstruction of the park is due to begin later this month. The grand opening is scheduled for late 2020. Galaxyland will remain open during the transformation.

See what our members are saying and follow the park transformation in our Forum Discussion.