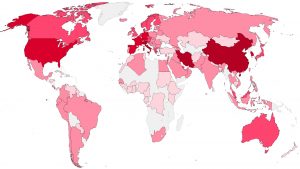 March 13, 2020 – The COVID-19 pandemic has pretty much shut down the theme park industry for the next few weeks, at least. Here’s a breakdown of the latest announcements:

Disney is closing all their parks effective immediately through at least the end of the month and the Disney Cruise Line will suspend all sailings after this weekend. This forced Disneyland Paris to abruptly announce that it would not reopen for the weekend, in spite of its previous announcement that its shutdown would begin Monday, and both Tokyo Disneyland and Tokyo DisneySea extended their park closures “through early April”. The grand opening for the New Fantasyland area in Tokyo Disneyland has also been postponed from April 15th to “mid-May 2020 or beyond.” The two parks were originally scheduled to reopen on March 16th.

Universal is also closing their Florida and California parks, but are anticipating a March 28th reopening, while all Busch Gardens and SeaWorld parks in Florida and California will be closed for the rest of the month, with their Virginia park opening date moving from March 23rd until the time their other parks reopen.

Knott’s Berry Farm has joined the Disney and Universal theme parks in closing until the end of the month, to help prevent the spread of the virus. Soon after Knott’s announcement, fellow Cedar Fair parks Carowinds and Kings Dominion announced that they will postpone their seasonal openings scheduled for April 3rd and April 4th, respectively. California’s Great America also will postpone its April 4th opening. No word yet on new opening dates.

The two Herschend parks, Dollywood in Tennessee and Silver Dollar City in Missouri, will delay their season opening to March 28th and Legoland California will close its theme park, water park and Sea Life aquarium from March 14th-31st, with its sister park in Florida doing likewise a day later from March 15th through the end of the month.

The new American Dream mall with its Nickelodeon Universe Theme Park will be closed starting March 16th, with no reopening date announced. This will also push off the opening of the mall’s DreamWorks Animation Water Park that was scheduled for March 19th.

In Spain, Parque Warner Madrid and Parque de Atracciones de Madrid closed immediately with no reopening date announced. PortAventura World, consisting of the three parks PortAventura, Ferrari Land and Caribe Aquatic Park, will not open on Friday, March 27 as scheduled and remain closed for the foreseeable future. Isla Mágica’s opening date is scheduled for April 18th and Terra Mítica does not plan to open until May 30th.

In France, Compagnie des Alpes decided to close Futuroscope and Grévin Paris from March 16th-29th, with Parc Astérix and France Miniature scheduled to open on April 4th and Walibi Rhône-Alpes the following weekend. Its two other properties, Walibi Belgium and Bellewaerde, are not set to officially open until April 5th.

Germany’s Hansa Park has pushed their park opening from March 28th to April 20th, however Movie Park Germany (March 27th), Europa Park, Heide Park (both March 28th) and Phantasialand (April 4th) have yet to announce anything. Look for the other parks to follow suit and delay their opening dates as well.

Efteling in the Netherlands, the most-attended theme park in the world, will close tomorrow through March 31st. Six Flags Mexico, Dubai Parks Parks and Resorts, the Yas Island parks (Ferrari World and Warner Bros. World Abu Dhabi), and Rulantica at Europa Park all announced that they will close until the end of the month.

Also, the Themed Entertainment Association has rescheduled its TEA Summit and Thea Awards Gala at the Disneyland Resort to to July 9th-11th. The event had been scheduled for April 16th-18th.

Against all logic, Australia’s big four theme parks have vowed to remain open to visitors amid the outbreak, despite a government ban on mass public gatherings. Gold Coast parks Dreamworld, Sea World, Movie World and Wet n Wild all intend to continue operating, despite all these parks elsewhere in the world closing their doors.

Lastly, President Trump has extended the U.S. travel ban to the UK and Ireland, in addition to the other 26 European countries previously listed. That pretty much affects any flights between the U.S. and anywhere in Europe for the time being. The UK is the biggest market outside North America for the Orlando theme parks, so here’s hoping the flight ban doesn’t continue too long after the parks reopen.