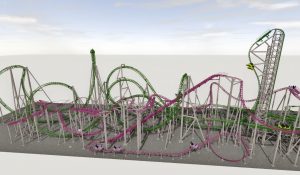 November 2, 2017 – The indoor Nickelodeon Universe theme park at American Dream will feature two record-breaking roller coasters by Gerstlauer.  They consist of an intertwined launched Euro-Fighter with a beyond-vertical drop and a Spinning Coaster whose cars rotate on a vertical axis as they move along the track.

“Featuring the best in family and adult entertainment, Nickelodeon Universe at American Dream has been designed to appeal to customers of all ages,” said Triple Five President Don Ghermezian. “By working with the best partners in the business, our park experience will be highly themed and offer one of a kind rides by Gerstlauer.”

The Euro-Fighter boasts the world record for the steepest coaster drop, while the Spinning Coaster will hold the titles of the world’s tallest and longest free spinning coaster. The two coasters will be intertwined, which means the combined 14 vehicles will run in and around each other.

“We have worked on many projects, but this will be unlike anything we have ever designed. Visitors to Nickelodeon Universe at American Dream are in for a great ride,” said Siegfried Gerstlauer, Managing Director of Gerstlauer Amusement Rides.

Read more and keep up with the developments of this beleaguered project in our Forum Discussion.

More information about Gerstlauer can be found on our Manufacturer’s page.