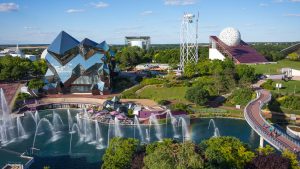 October 13, 2017 – Dominique Hummel, Chairman of the Board of Parc du Futuroscope, announced at the Tops du Tourisme conference that the park will be adding their first major roller coaster in 2019. At a cost of $26 million (€22m), the coaster will be themed to a space adventure with both indoor and outdoor sections and feature a freefall drop section of track.

“We are going to propose a test of space,” Hummel said of the ride experience. “Our visitors will see if they are able to go on the moon and beyond the atmosphere.”

Parc du Futuroscope is a theme park in Jaunay-Clan, France based around multimedia, cinematographic and audio-visual techniques. It has several 3D and 4D cinemas along with shows and other attractions, including a Sunkid Heege Butterfly self-operated kiddie ride that many enthusiasts consider to be a coaster. It was the country’s fourth largest park in attendance behind the two Paris Disney parks and Puy du Fou with 1.9 million visitors in 2016, a 5.6% increase over the previous year.

Read more and see what are members are saying in our Forum discussion.