Came all the way here from Europa via stupid trains. Sympathy please. 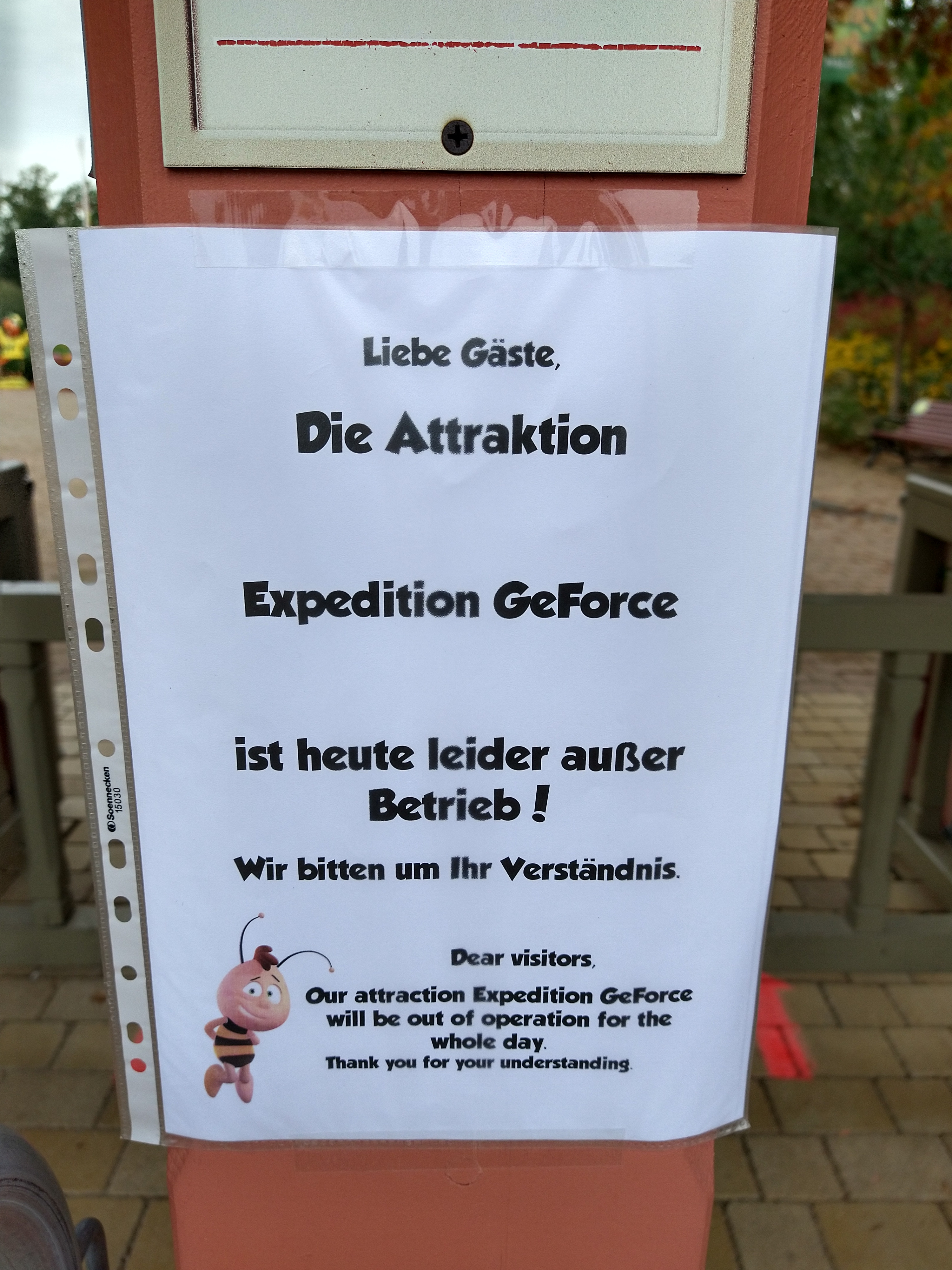 Aw buddy that's the worst one. I hired a car specifically to travel up from Europa in 2017 and was greeted to that same sign, absolute gut punch. It's made so much worse as well by the fact you can see it from every path.

Hope you can salvage it and still enjoy the day. I think Sky Scream is deffo worth the trip up and there's lots of solid rides like the drop tower and breast heavy dark ride. Sucks though, I bet you're wishing you had another day at Europa instead.

Ouch, it's bad when the park is such a One Hit Wonder too.

I got spited by Sky Scream when I went; disappointing but not too bad.

Was absolutely gutted at first but it's actually really nice here tbf. Better than being at work I guess. Sky Scream is superb but feels like more of a flat ride than coaster.

Asked the bloke at the park entrance and he said he's not allowed to tell me but he was very apologetic. Can't see any work being done on or around it.

Oh, I know that feeling bro !

We went there with some friends.
Done Europa-Park the first day of opening last year. It was friday, was with my wife and everything was perfect.
The saturday we headed for Holiday Park with the 4 other guys. It was cold and rainy.

It was our first for all of 6. The only cred we rode was the kiddie in the indoor area. Skyscream and EGF didn't moved at all. They said they didn't had the time to test them the previous day, and now it was too cold ... oh and the StarFlyer was down too (not that I care, I'm afraid of theses non-sense thing)...

Not the best visit I had in a theme park.

Luckily, the sunday we visited Fraispertuis City, wich was absolutely empty, and everything was just perfect !

So how did the lightning strike feel like?
(yes i know you meant spited but i wanted to point out the error)
E

Cranedude said:
So how did the lightning strike feel like?
(yes i know you meant spited but i wanted to point out the error)
Click to expand...

Haha well done autocorrect! It felt like being smited second time around I tell you!
M

Forked out to go to IOA twice, both times VelociCoaster was down all day. I think I’ve given up for the time being!

OOF. That would suck for me.

Also, update to my earlier post: it wasn't just Goliath at SFGam that got spited by me vomiting due to my V2 induced headache: I only did the observation tower, Raging Bull, X-Flight, the aforementioned V2, and then the Big Easy Balloons on the way out. We planned to have a longer day, but alas...

Oh and on the second trip we got gypped out of Whizzer and Demon due to the line at Logger's Run being 2 ****ING HOURS (last 2 hours before park closing). Only got to do Condor, Dark Knight and the log flume (it was predominantly for my sis and my brother wasn't there, so no major thrill rides) before we had to leave. We passed up a second day so we could hit up Six Flags St. Louis......which WAS ONLY OPEN ON WEEKENDS (it was the last week of 2019 that SFGAm had full week operations and it was a weekday). So that's nearly 2 entire parks worth of coasters spiting.

Oh and Dixie Landin' was closed for all of 2021 when we went to NOLA, so 3 creds spited.

And the Magic Springs trip being cancelled spited me of the creds there.

MakoMania said:
Forked out to go to IOA twice, both times VelociCoaster was down all day. I think I’ve given up for the time being!
Click to expand...

On the flip side, though; you know what they say about “third time lucky”… maybe it’ll be open on your next visit?
J

EmmaUK said:
Twice smited on Matterhorn bobsleds - 2 visits to the other side of the world 3 years apart and closed each time

Ouch. I missed Matterhorn too and I fear this may happen if I return.

Especially frustrating because I knew beforehand that Matterhorn often goes down for refurbishment, so I intentionally planned my trip to be a few months after a lengthy refurb, thinking that they wouldn't close it down twice within a year.

Lo and behold they did.

gengarhaunts87 said:
let's see:
1. hyper sonic xlc. only got 1 ride before it went belly up, and felt like it wasn't worth the near 2 hour wait.
2. marathoning loch ness monster. yes i love the ride, but 8 hours later ( 64 ride total ) massive headache and hunger wasn't worth it.
3. vortex at carowinds. yea my family jewels still dont forgive me.
4. big apple / Manhattan express. yup you guessed it another marathon ( 26 total )
5. rock n roller coaster disney. i stand by my words after my last ride, " that ride made me feel like a flaming bag of trash on a jersey turnpike. please re-track this asap."
Click to expand...

I see a surprising lack of spites

Cranedude said:
I see a surprising lack of spites
Click to expand...

yup. if i had to add more they'd be not riding speed on my very 1st time in las vegas, and my last trip there not riding el loco. i might just add a stop there when i hit the west coast.
H

gengarhaunts87 said:
yup. if i had to add more they'd be not riding speed on my very 1st time in las vegas, and my last trip there not riding el loco. i might just add a stop there when i hit the west coast.
Click to expand...

I think he meant that none of yours were spites because you rode all the rides you'd listed. That is the opposite of a spite.
Last edited: Sep 12, 2021

Heth said:
I think he meant that none of yours were sites because you rode all the rides you'd listed. That is the opposite of a spite.
Click to expand...

So he's never had a single site?

I posted before, but I remembered another pretty big and painful spite: The entirety of Six Flags Mexico.

A couple of years ago, my favourite band was playing 2 shows for new years in Mexico and I had decided to go. Getting to/from there invloved a layover in Mexico City. Going wasn't too bad, but the return flight had pretty much a full day wait between flights. At the time, it was annoying but I had just decided I'd load up my phone with films and shows and spend the day in the airport.
It wasn't until about a week or so before I was due to go that it suddenly clicked in my head "Hang on, I'll be in Mexico City, why don't I go spend the layover at SFM", so I went on the SFM website to check the opening hours for that day, only to find that the day of my layover was the one day in the whole month that SFM would be closed.
I wasn't particularly happy.
You must log in or register to reply here.
Share:
Facebook Twitter Reddit Pinterest Tumblr WhatsApp Email Share Link
Menu
Log in
Register
Top