Unknown rides outside of parks.

There's been a random Zamperla Super Spin for around half a decade if memory servers correct on an island right off a northern coastal city called Oulu in Finland called Noitarumpu (Sámi shaman drum), which you can ride during a couple summer months for 6€.

I'm not sure if it's still there (It was for sure 2 years ago and there's a summer resort on the island so I assume it has customers) but it was built as a taste of a Kalevala (Finnish mythology) themed theme park that was going to be built on the location. The idea stayed in limbo for a while but now the plan is renewed with the idea to build a Kalevala and Norse mythology theme park on the location.

...I can't make up my mind if that looks fun or like an upsetting mixture of Submission and Samurai, with a hint of Fabbri topspin!

SilverArrow said:
I have been seeking these kinds of things out more and more as there's a lot that the coaster community misses out in terms of other rides that are out there if you're also interesting in flat rides or dark rides etc. That rainforest cafe ride looks really good. Was not expecting it to have rapids boats at all when I first discovered it! Only discovered and rode the Weston-super-mare pier ghost train last year and it is definitely an unusual example! Nice to read about Beaulieu, didn't realise they had so much there!

A few I thought of have already been mentioned but I'll see what else I can think of.

There's a wildlife park in Devon with a calamity canyon style train ride. It's had a few different iterations including caveman and wild west themes.
It can be seen around 3 mins here.
The older wild west version can been seen here.

Various other zoos have monorails and other rides but not sure if they're interesting enough to mention. Chester recently closed their monorail but also recently added a cable-powered boat ride in their Islands section.

I know it's a theme park but Bellewaerde have a ridiculous train ride that goes into the Tiger and Lion enclosures. Had never seen that before. Quite unnerving when they walk past up close!
Click to expand...

I have vivid memories of the calamity canyon in Devon but had convinced myself it was a dream after not being able to find it (for some reason I thought it was at Paignton Zoo)! 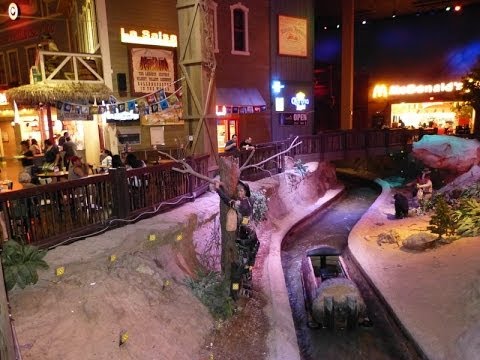 Chris Brown said:
I have vivid memories of the calamity canyon in Devon but had convinced myself it was a dream after not being able to find it (for some reason I thought it was at Paignton Zoo)!

Glad I could help!

I think the Buffalo Bills log flume closed with Desperado, and has has a similarly sporadic operating schedule since then. Hopefully it is still running or will do so in the future. It looks really quirky!

I know the Luxor casino hotel in Vegas had a water ride going through it that was themed to the Nile called the "Nile River Tour" when it opened. I guess it's sort of similar to the gondola boat ride at the Venetian that is still in operation. The Luxor also had a simulator ride with an Egyptian-themed storyline when it opened as well.


(This is quite long but talks about the technology they used.)

Whilst it's not strictly a ride, I've seen a few mentions of the Star Trek experience that used to be at the Las Vegas Hilton as well recently. It seemed to be an immersive experience mix of walkthrough and 3D cinema type thing and it looked interesting. I'm sure a few members have done this and some of the aforementioned attractions. There's probably loads more Vegas options that could be talked about as well!

Donkey in a hat

Ooh, just remembered a good one - City Museum, St Louis.
More like a giant fun house than a museum, no stuffy old relics here, this is slides, swings, climbing frames, tunnels, passageways and all manner of fun stuff. It's awesome.
Oh, and there's a ferris wheel on the roof.