The theme park Tripsdrill near Cleebronn is to receive another big attraction. A planning concept envisages a roller coaster with a height of 22 meters. The railway could go into operation at the beginning of the season in 2019.

The Fischer family thinks of new attractions for the amusement park Tripsdrill. Since 2013, the catapult roller coaster "Karacho" has provided thrills. Previously, the wooden roller coaster "Mammut" had been attracting guests since 2008 - since then no new crowd pullers have been inaugurated. That should change in the next few years.

Already for the past Parkerweiterung a development plan was necessary. This was launched in 2009. Unanimously, the Town Council Cleebronn has now approved the procedure for an installation decision for the development plan "Adventure Park Tripsdrill - 2nd construction section".

In order to remain competitive, a theme park should come up with a new attraction every three to four years, said Professor Waltraut Pustal from Pfullingen, who is setting the plan for the amusement park. According to her concept, the new large attraction - a triplet-style roller coaster with a height of 22 meters - could already be opened at the beginning of the season in 2019.Another ride with a height of up to 31 meters is planned for 2020. It would be as high as the "Mammutbahn".

Visitor flows are to be redirected

The new family-oriented leisure attractions are designed to redirect the flow of visitors within the park and are therefore set up in the east, so opposite of "Karacho" and "Mammoth". A 3.15 hectare area directly to the left of the main entrance is provided for this purpose.

On this area outside the fenced amusement park there are currently alternate parking spaces to relieve the adjacent central parking lot. The properties are already owned by the Fischer family.The new attractions are to fit harmoniously into the park landscape, planner Pustal announced.The new offers are connected to the inner road network and do not receive their own entrance.

The public transport concept is already being worked on

A further parking concept is planned according to Pustal. The transport concept is also being worked on, the planner said on request. "Already more buses are going to the main entrance than before, as all buses were only allowed to stop at Katharinenplaisir," said Mayor Thomas Vogl.

"Could you please reconsider whether a sidewalk from the Katharinenplaisir station to the main entrance can be realized? If school classes arrive, they walk along the busy street," said council member Ines Schwarz. "We have that on the screen," promised the planner.

Driveways get their own names

Since Tripsdrill is not easily found by navigation systems and some of the visitors are even directed to the administrative entrance of the park, the council unanimously decided to give the two entrances to the main entrances own names.

The section in front of the park is a county road and may not receive a name from the municipality.The access roads from the county road to the respective entrances, however, already. In the future, the road to the animal enclosures will be called "Wild Paradise Tripsdrill Road", the street next to their destination according to "Adventure Park Tripsdrill Road".
Click to expand...

I would guess a Gerstlauer similar to Firechaser Express.

Ooo interesting. Lovely little park so I'm sure it will be well themed and nicely done.

I could use an excuse to go back here. Very nice little park with great theming and atmosphere.

Yay, I was just posting about Mammut. Love Tripsdrill. Needed no excuse to go back but this makes it all the sweeter for a return visit.

The article states a 31 meter tall attraction is in the works for 2020 as well.

^I doubt they'll both be coasters.

Due to some planning permission issues work has only just started now on the new coaster. Footers that appear to be from Vekoma have arrived on site (which would match with rumours).

Are we sure this is Vekoma? Tripsdrill prides themselves on buying exclusively German rides, I find it odd they’d change suit now.

Finally, they're getting a coaster that isn't a Gerstlauer. What kind of Vekoma is it likely to be? I mean, I heard it's supposed to be family oriented but 22m tall. Possibly a Mine Train or Booster Bike?

Or perhaps if it is the 31m coaster it could be a new-gen thrill Vekoma, possibly an STC?

CrashCoaster said:
Finally, they're getting a coaster that isn't a Gerstlauer. What kind of Vekoma is it likely to be? I mean, I heard it's supposed to be family oriented but 22m tall. Possibly a Mine Train or Booster Bike?

Or perhaps if it is the 31m coaster it could be a new-gen thrill Vekoma, possibly an STC?

And @CSLKennyNI what rumours of a Vekoma?
Click to expand...

German enthusiast sites and social media have been mentioning Vekoma for a while now in connection with this project; that's all.

CSLKennyNI said:
German enthusiast sites and social media have been mentioning Vekoma for a while now in connection with this project; that's all.
Click to expand...

Wasn't there plans for a 22m tall and 31m tall attractions? Or is it just one now...

Visited Tripsdrill a couple of days back. Not much change - they've dug out what probably is the foundations of a station building and the Vekoma stuff is on site.

Referencing this coaster's reported height of 72 feet / 22 meters to Vekoma's more recent projects, I'd make an educated guess that this coaster could end up being a custom Vekoma Family Boomerang similar to, if not a clone of, the Rebound model (one example is Velociraptor at Paulton's Park). This would satisfy both the family (a rather tame layout without inversions or high speeds) and thrill (half the ride is taken backwards) markets, as well as make for a lower-cost investment that, in Tripsdrill fashion, would allow them to spend a large chunk of money on theming since the ride itself wouldn't be that expensive.

Out of interest - @CSLKennyNI, where exactly in the park is this new Vekoma roller coaster going? I'd like to take a look at the plot of land Tripsdrill is using for this coaster to make a more educated guess at what exactly it's going to be. 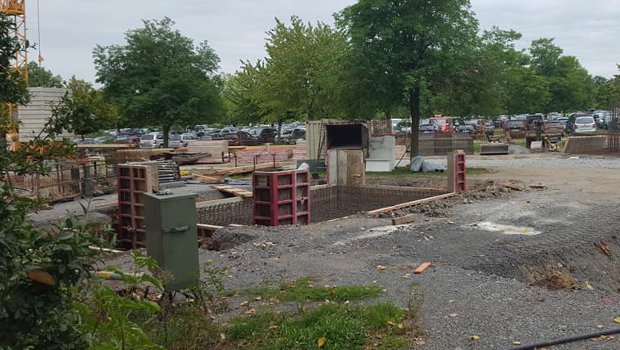 Even if it was only a family boomerang or an other ride I will travel back to this fantastic park ! The STC is a great addition to complement Karacho in their thrill ride collection. The only part I'm sad about is that the coaster will be located near the entrance/West side of the park (behind the two mini free fall) and it's a really calm area where you can chill and relax so I hope it will stay the same BUT with a great ride

How is that the case when the park stated the coaster will be family oriented and less than 100ft tall, when this model is 100 ft tall?

CrashCoaster said:
How is that the case when the park stated the coaster will be family oriented and less than 100ft tall, when this model is 100 ft tall?

Coaster Chall YouTube said:
There is the option to not include the inversion but yh it's definitely questionable
Click to expand...

Then would It not just be an STC?