Feel its finally time these parks get their own thread. Theres an absolute crap ton of news coming for these parks as they continue to expand and a stupid rate.

Context
Transmart have a partnership with Carrefour a huge French owned retailer in Indonesia and have been building a succession of small shopping malls and larger developments across Indonesia. They started with Trans Studio in Makassar in 2009 which opened with a Zierer Force 2 but quickly ramped up to the large Trans Studio Indoor Theme Park in Bandung which is home to Yamaha Racing Coaster a custom premier launched coaster from 2011.

Things remained quiet untill the first of the smaller Transmart developments started to open in 2014/15. This marks an interesting acquisition for the company as they purchased the old Vekoma Junior Coaster from Chariots Entertainment City in South Africa. This 247m indoor coaster was custom built for the South African park but it seems Transmart liked it so much they bought another 48 of the things from Vekoma. (I would loved to have seen the face of the Vekoma exec who was in that meeting)

Example of a 247m model Vekoma coaster at Transmart Jember. All of this model so far have a corner that bursts out of the building into the open.

Since then Transmart have been building these 247m Vekoma Junior coasters at quite a rate with 21 already in operation and have been supplementing them with a load of other coasters picked up second hand. Including the following

As of today the company has 33 coasters at 31 parks with loads more in the pipeline. These mostly come under the Trans Studio Mini or Kid City brands of parks which are for the most part identical really.

Im not going to list all the parks here but the RCDB has everything we know about so far and i keep a spreadsheet of known rides and ones im following under construction and proposed alike here.

Now to the present.
Trans Studio Action Park
Trans Studio Action Park in Cibubur (Jakarta) is the biggest Trans Studio park in years and will feature 3 relocated coasters.
The park is already building the old Boomerang from Knotts Berry Farm and will also be building a Batflyer from Japan (either Nasu Highlands or Hamanako Pal Pals although rumour has it Transmart bought both). I cant reveal the 3rd coaster yet but shall hopefully be able to soon.

The old Pleasure Island Boomerang going in on a rooftop in Cibubur.
A video from last month showing construction on the huge Trans Studio Action Park in Cibubur.

Trans Studio Bali
Another large new park is heading to Bali and will feature 2 other relocated coasters. Here we have Vleermuis the old twin track Batflyer from Plopsaland in Belgium and the old Boomerang from Pleasure Island in the UK which will be getting new trains from Vekoma.

A shot showing Vleermuis going in at Trans Studio Bali
Trans Studio Mini Tasikmalaya
The next new trans Studio Mini park will feature another of the new 247m Vekomas but currently doesnt have track on site. The footers for the corner out of the building can be spotted here though

Now i have somewhere i can put the updates for these parks I'll keep you updated as an when
Last edited: Mar 2, 2019

@roomraider It seems the Action Park has received Knotts' boomerang. Legacy Entertainment has stated that the two boomerangs were switched. However, the loop on this one features the same crossties as the one from Pleasurewood, not Knotts'. Knotts' boomerang features the same density of crossties throughout the loop whereas Pleasurewood's varies. Do you have any more information to help clear this up?

Pear said:
@roomraider It seems the Action Park has received Knotts' boomerang. Legacy Entertainment has stated that the two boomerangs were switched. However, the loop on this one features the same crossties as the one from Pleasurewood, not Knotts'. Knotts' boomerang features the same density of crossties throughout the loop whereas Pleasurewood's varies. Do you have any more information to help clear this up?
Click to expand...

The other boomerang actually comes from the defunct Pleasure Island, not Pleasurewood Hills (easy to mix up) and has the same track style. Wipeout isn't going anywhere (for now)!
Rcdb still lists the unit at Trans Studio Action Park (Cibubur in Jakarta) as a relocation of the boomerang from Pleasure Island. But it very much could be the Knott's coaster as the 2 are visibly identical!

(Proof)
The extra track ties must therefore have been added by American Adventure. This appears to be true, since on the rcdb entry, there are photos of Missile both with and without the cross ties. Why it would need them, when the structural integrity of boomerangs without them is clearly fine, baffles me. Maybe a manufacturing defect that was picked up at some point before 2002?
Missile before the modifications: 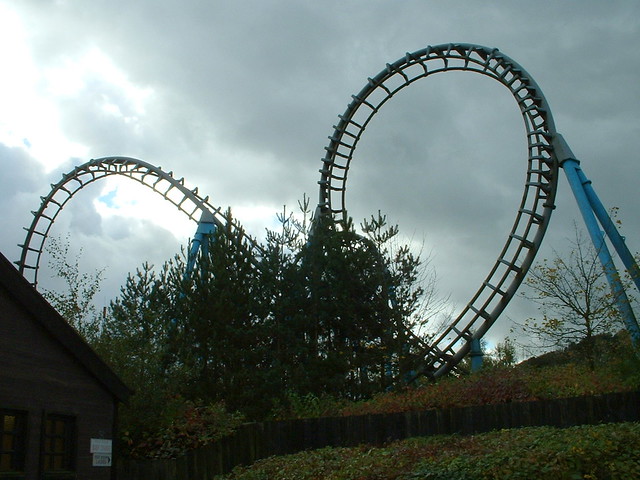 Note that the extra cross-ties weren't added alongside the ride's new trains or colour scheme, supporting the idea that they were structurally important (I've attached a photo of the coaster with the newer black and blue colour scheme, but without the extra track ties)
As a bonus, here's an extra photo of wipeout, which shows the cross-ties really clearly:

To add to the intrigue, on the right of the loop, you can clearly see that the cross-ties are visibly very slightly thinner?

On top of the locations, does anyone have any idea about this new mystery???

This is an interesting conundrum. My source for where the rides went works for Transmart which I am sticking with for the moment (Its also why the RCDB lists them that way round at the moment)

I have asked my contact for some clarification so will see what comes up.

But you raise a good point about the ties. The one at Cibubur also now has the extra ties even though neither Pleasure Island or Knott's boomerangs had them to start with... What is that about?

Edit - I have heard from my contact at TM. It seems due to a conflict in the Refurbishment schedules the rides were indeed switched right at the last moment. The Knotts Boomerang is the one seen above and the Pleasure Island model will go to Bali. All a bit confusing.
Last edited: Mar 1, 2019

Well it's nice that that's all cleared up! Maybe the ride received new track on the loop?

@CoasterCrazy
Turns out Boomerang at Fantasilandia in Chile also has these extra ties. Another Boomerang that was refurbished part way through its life... Its more common than thought.

An actual update from the Cibubur Park as the (Now known to be) Knotts boomerang goes up. But in other news one of the Japanese Batflyers (Hamanako Pal Pal or Nasu Highlands its unknown at the moment) is now on site. Also look closely at the 2nd to last pic here there appears to be some black coaster track here as well.

There is a 3rd coaster expected here although that black track doesn't match what I expect it to be.
Last edited by a moderator: Mar 2, 2019

Sorry for a triple post but to confirm the black track seen above is what I expected and its now been confirmed.
Xtreme the Maurer SC2000 spinning coaster from Dixie Landings.

A real weird little collection they have at this park now.

Well that confirms Adventureland getting a new spinner and not that one!

In an unrelated bit of news (well unrelated to the Parks in the OP) a new Trans Studio just opened at Transmart Pekalongan and it appears they've installed the old Vekoma Roller Skater from Pleasure Island in the UK.

The ride is called Crazy Taxi despite having steam trains as the car but there we go.