The Limburg park Toverland get one of the most spectacular rides in the Benelux. In 2018, the theme park in Sevenum opens a wing coaster "of tens of meters high, with carts next to the rails. That may report Looopings after talks with several staff and suppliers.

Toverland joins forces with the renowned Swiss manufacturer Bolliger & Mabillard (B & M), known dive coaster Baron 1898 in the Efteling. The opening of the million acquisition is scheduled for the summer of 2018 as part of a new theme area .

The sensational roller coaster will be the fourth wing coaster in Europe and the first in the Benelux. According to the manufacturer will ride for "an unprecedented sense of freedom, with nothing above and nothing below you" .

The first wing coaster from B & M opened in 2011 in the Italian Gardaland. Meanwhile, there are also copies include Thorpe Park (Great Britain) and Heide-Park (Germany). Wing coasters usually reach a top speed of 90 to 100 kilometers per hour.

It is in the corridors have long talked about the arrival of a wing coaster, but until now was it rumors. Looopings can first say with certainty that the sensational news is true, though Toverland will attest not yet official. "We open in 2018 is indeed a new theme section with a special new roller coaster, but we can not say what type it is" let a spokeswoman know.
Click to expand...

I wonder what they'll go for? I'm expecting something relatively small like Raptor, rather than one of the big ones like Gatekeeper, but who knows!

I'd love a cross between Thunderbird (for the launch) and Flug (for the wacky elements).

Great! Toverland's been doing some very nice landscaping on their newer rides, so I don't doubt their ability to do something interesting with the layout. It's a shame that the park's a bit flat. I remember liking the way Flug der Dämonen played with the hill in the corner of the park. Still, Toverland's main talent seems to be their ability to take ordinary rides (Bob Kart, spinning coaster) and make something special of them.

Staff member
Administrator
Moderator
Social Media Team
What I love about Toverland is they don't buy ****. Ok, they have Booster Bike, but for what it is and who it's aimed at, it's fine. By all standards, a park that is only 15 years old doesn't typically buy B&Ms, GCIs, Macks etc, its more the B-C grade stuff. Throw on top the fun and theme and Toverland is probably the most impressive modern park in the world.

Wonder if it'll have a 1.4m height limit, cus that isn't "family friendly"...but it's the Netherlands where kids are over 6ft by the time they're out of nappies anyway.

I'm not expecting any huge thrilling elements like Swarm's drop but I just know the experience will be good, all round fun. I bet it will have on-board audio, too.

Fuxake, Toverland! 2018 is busy and exciting enough already. I can't take any more. I lie. Of course I can. Bring it on!

I remember hearing this vaguely a while back (along with a brand new entrance to the park), but I'm really excited it's happening now. They have a great selection of rides to cater for a wide audience, and now they'll have something at the very top end of their ride catalogue.

Oooh perhaps Toverland were watching our twitter chat last night and thought they'd surprise us all with a nice little announcement today
What a great addition for the park though, the B&M wing coasters are the perfect example of something that's fun and thrilling but not too intense. Looking forward to seeing the layout for this one.

I thought they were in talks for a Mack Megacoaster after the success of their Mack Spinner?

Anyway, B&Ms are always a nice addition, even if they are wing coasters... I am really impressed by Toverland. How can they afford so many quality rides/extensive landscaping being so recent and "small"?

Awesome! I can't wait to see what Toverland do with the theming and the soundtrack!

This will be a great edition to the park!

Just to clarify, neither the park nor B&M have made any announcement. The park has only confirmed that a new themed land, with a coaster, will be opening in 2018. I made inquiries to my contacts at the park and B&M. Both replied that they cannot comment further at this time.

This will give Toverland a real good opportunity to change the landscape of the incredibly flat current park and will undoubtedly be a great addition for the park. Just goes to show how well the park has come on in its 15 year adolescence! I, like others, would much prefer a raptor style layout with normal first drop and close low to the ground interactions. Walibi better watch out!

I have heard rumours that it could be launched, but I have my doubts. Since they don't have any coasters that invert (as far as I am aware of) then I think a traditional looping coaster would be cool, even better a b&m wing coaster!
B

Well, if they are really reaching for 90-100 kph, they either need to build a launch, or a >40m lift, in which case it would not be a smaller coaster by any mean.

A B&M wing coaster does sound like it could feel a bit out of place in a park like Toverland tbh, but I'm sure they'll find a way to make it work. And surely they're one of the smallest parks (in terms of attendance figures) to invest in a B&M coaster, which shows the park's ambition.

Hopefully this is indeed what's happening and I look forward to seeing what they're coming up with theme-wise!

I became elated as I read "Toverland to add B&M", but then I saw the second part. This will be very interesting nonetheless.

Yes, yes, yes! Toverland have come on leaps and bounds with their recent spinner, rapids and theming. This is exactly what they need, another substantial coaster to really put them on the map. So happy right now

It's going to be really interesting to see the layout, I don't think we're gonna see your average coaster with this.

In my head it's going to be launched and fairly tame. A bit like Juvelen but with lots of trenches and maybe an inline twist.

I'm not a huge fan of the ride type personally, they are alright, better than a kick in the nuts.
That being said, I do really like Toverland, I like the presentation of their coasters (not the motorbike, bleh), and their other attractions are similarly wacky and well presented. So I have no doubt they will smash the theming and overall experience, just a shame they've chosen middle of the road hardware.

Benenen said:
In my head it's going to be launched and fairly tame. A bit like Juvelen but with lots of trenches and maybe an inline twist.

Sent from my HTC One_M8 using Tapatalk
Click to expand...

I find inlines to be the most uncomfortable part of these things, so I hope not that bit.

We have a possible layout: 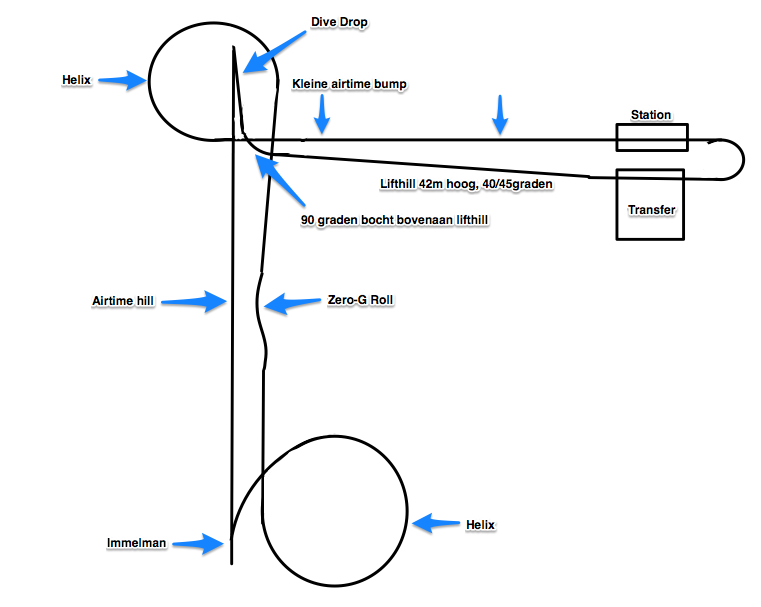