LA Times accidentally leaks every new attraction the Six Flags chain parks are getting in 2012.

Six Flags Great America (outside Chicago) – Billed as the only wing coaster in the United States, X-Flight by Bolliger & Mabillard will feature barrel rolls and high-speed drops with seats that straddle the 3,000-foot-long track.
Click to expand... 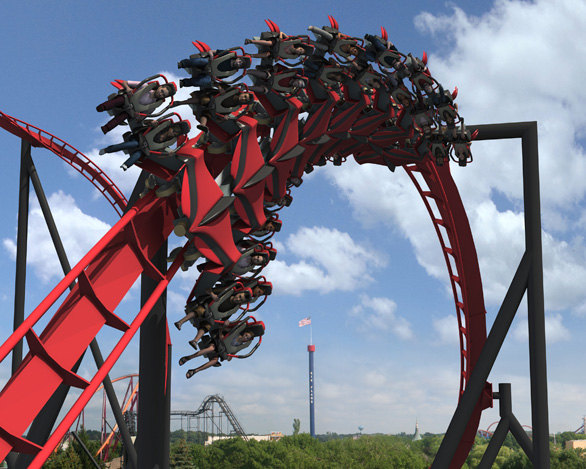 I have no clue what is happening at the first drop, but if all wing riders are going with a more Swarm first drop, then I am IN!

Also, HA! Six Flags can never have anything special lol.

Switching between the hideouts'...
B

How are B&M suddenly building every park and their mother a coaster this year? It's AWESOME.


Ben said:
How are B&M suddenly building every park and their mother a coaster this year? It's AWESOME.
Click to expand...

All the more reason for me to save up to go over to that region of America...
B

^And there's Port Aventura as well.

So does this confirm that Dollywood's isn't going to be a Wingrider?
B

Make sure you download the B-Roll zip off that page if you want to see a POV.

Gurnee, Ill. (September 1, 2011) – Get ready to take flight! Six Flags Great America announces plans to add a state-of-the-art roller coaster for the 2012 season. X-Flight is a ground-breaking wing coaster featuring cutting-edge technology. The Gurnee theme park is the first to announce plans for a wing coaster in the U.S.

X-Flight will take riders on a flight that defies gravity, with no track above or below them. Riders sit in pairs, suspended on either side of the track with their feet dangling, as they begin their climb up a 12-story plunge launching them into speeds of 55mph through 3,000 feet of intense drops and five inversions, including a barrel roll and zero-g roll. One of the most adrenaline-pumping moments on the ride is an extreme fly-through where the coaster speeds straight toward a structure, before making a last-minute vertical flip to fit through a keyhole cut-out.

“Six Flags Great America has a long history of introducing legendary rides and first-of-its-kind roller coasters,” said Hank Salemi, Six Flags Great America Park President. “What makes
X-Flight so unique is soaring through 3,000 feet of high-speed drops, loops and turns, with nothing above or below you. The coaster’s train actually looks like a plane with seats suspended on either side of the track. It’s like nothing you have ever experienced before. We are thrilled to bring this revolutionary wing coaster to our guests for the 2012 season.”

X-Flight is designed by acclaimed Swiss manufacturer Bolliger & Mabillard, who also designed Six Flags Great America favorites: Raging Bull, SUPERMAN: Ultimate Flight and BATMAN: The Ride. The wing coaster will make its home in the County Fair section of the park. Construction begins this Fall. X-Flight is scheduled to open Spring of 2012.

Six Flags Great America is located between Chicago and Milwaukee and offers fun for the entire family with 14 heart-pounding roller coasters, a free 20-acre water park, spectacular shows, a nighttime illuminated parade and three children’s themed areas. Soar on X-Flight all season long with a 2012 Season Pass, now on sale for $64.99 for four or more. Buy now and get a
2012 Season Parking Pass free. Sale ends October 30, 2011.

Six Flags Entertainment Corporation is the world’s largest regional theme park company with 2010 revenue of nearly $1.0 billion and 19 parks across the United States, Mexico and Canada. Six Flags Over Texas, the company’s flagship location, is celebrating its 50th anniversary season
Click to expand...

First announced Wing Rider goes to SFGAm it seems. Now it is just a race to see who completes it first (Dolly).

That is a pretty awesome layout, I personally prefer the look of the layout to the Swarm but will have to wait to see how they both ride.

Also you can add the Ocean Park Floorless to the list at the top. technically manufactured last year but opening next year.

Well at least the name is unique.

ahhhhh! Its so amazing! I really want to ride this!!
I cant beleive B&M. Theyve got a total of 8 project next year now?
Including Hair Raiser that is.
man they are going to be a bunch of successful buggers!

I might have to go over to Chicago and check this bad boy out. Looks pretty sweet!
U

Looks pretty sweet. Not too keen on the colours, but I do love that roll through the building, and the first drop. Seems parks are snatching up these wingriders faster than B&M can produce them.

How much money does B&M do from the 2012 projects now, over 100 million $ i guess. This looks great, but It's too far away, i stick to the european version.

I think this trumps Raptor easily...

Im completely loving the fact that the wing riders will have (read: so far the announced ones seem to at least) the inverting first drop

Im so god awful psyched now for the 2012 season!

I think (until Monday) this is the best wingrider model yet. It looks intense, fast paced, and a lot of fun. Then again, it is Six Flags, so that building will become a cardboard cutout and they will put a fire effect at a random, non fitting spot.
You must log in or register to reply here.
Share:
Facebook Twitter Reddit Pinterest Tumblr WhatsApp Email Share Link
Menu
Log in
Register
Top