Hi guys. Sorry if this already has a thread, but according to Screamscape, Six Flags America has been running a teaser campaign regarding something ending/closing on 16th August. Here's how it all started:

Screamscape said:
(8/4/18) Six Flags America posted an odd teaser to their Instagram and Twitter this morning... featuring an August 2018 calendar shot, showing off two things of importance. For starters, August 16th is circled, and the message with the Tweet was that "Time is running out for summer thrills!". The problem here is that a quick check of the park's hours shows that they keep their long summer hours until the end of Labor Day Weekend, so clearly the summer hours are not going to run out after August 16th... but could this been a sign that something else might close on August 16th?
The second hint of importance here is the photo on the calender... which is a photo of an old 1967 Pontiac Firebird emblem. According to one source, that survey Six Flags sent out previously this summer which mentioned a good number of possible ride names apparently did include "Firebird" as a possible future ride name.
Click to expand...

Which would have implied that an existing ride was being closed on 16th August to make way for a new ride named Firebird. However, things took an interesting turn in today's Screamscape news update:

Screamscape said:
2019 - New Construction? - (8/11/18) Something interesting is going on at SFA that seems to follow up that teaser from last week. First up, a new sign has been added to the black fence around Apocalypse that says "TERMINUS -81618-". Now before all The Walking Dead fans get too excited... I really don't think this is a tie into the show at all, despite the use of the word Terminus. The numbers match up to the same August 16th, 2018 date we saw circled on the calendar. The font style and use of larger letters for the first and last letter in Terminus was also used for some versions of the Apocalypse coaster logo. Let us also look at the primary definition of the word Terminus, outside of the railroad industry. "A final point in space or time; an end or extremity." So is this THE END of Apocalypse?
Secondly another set of clues to back this up are also being set up across the pathway from Apocalypse. Day by day an retired ride graveyard is being set up... which is normally the kind of thing you often see at theme parks as they prepare for their Halloween events, but in this case I'm told that a new tombstone seems to be getting set every day, and all of them are facing Apocalypse. As of Friday, I'm told there were at least three on site: Iron Eagle, Python and Krypton Comet. If a related rumor is true, we could see a new grave marker added each day between now and August 16th... and there is always the possibility that Apocalypse may join them the next day.
But add in the Firebird emblem from the calendar shot last week... a Firebird, also known as a Phoenix, rises from it's own ashes after it dies, reborn again. Given that this is a B&M Stand-Up Coaster... as well as having the honor of being the very first B&M coaster ever built (when it was Iron Wolf at the Chicago area park), the trend lately has been to transform B&M's old stand-up coasters into new Floorless coasters by adding new trains and modifying the station. With all this in mind... perhaps this is indeed Apocalypse's "last stand".
Click to expand...

A floorless conversion of Apocalypse would make sense, but it seems slightly strange that they would do this just 6 years after Apocalypse was introduced at SFA, despite the ride being nearly 30 years old. What do you guys think?
P.S. Here's the Screamscape link: http://www.screamscape.com/html/six_flags_america.htm

Well considering it has apparently been running **** this year (I mean it was the first B&M/B&M Stand Up) I think this would be an awesome improvement, and will show the ride to it's full potential.

While this sounds like a totally awesome idea, there's virtually zero marketability in it, so I highly doubt Six Flags would do that (unless they rethemed it too, which would be unlikely since they spent so much theming it just a couple years ago). I personally predict some sort of Aftermath: Chaos Rising style maze for Fright Fest, although I would love if it came true!!

This is some really deep teasers. Perhaps Apocalypse will be replaced entirely?

Kind of a silly thought, but still.

So it is getting floorless then? Although it says closing forever, so it sounds to me like it will be demolished.
P

^Yeah the tweet seems to suggest it really is going for good.

I do hope it changes to a sit-down, it's not a terrible layout and it'd be a good way to get some more life out of the ride for the park. I suppose we'll find out in a few weeks when Six Flags do their big announcement.

I'm a little amused they announced a coaster closure on rollercoaster day.

Cedar Point announced Mantis closing in a similar manner ("closing forever"), so I'd say it's a safe bet that this coaster is indeed going floorless.

Ah right. Wouldn't surprise me if they did convert it to a floorless; seems like a very Six Flags thing to do if you get what I mean. This closure seems to have been announced in the same type of way as when an old wooden coaster closes in Six Flags to get RMC'd, so it wouldn't surprise me if they announce a floorless redo of Apocalypse on Six Flags Day. Besides, it would be a bit sad to see B&M's first coaster go to the scrap heap...

First off, #ByeFelicia, ridden this twice and it beat the snot out of me both times.

Second, I’m fairly certain it’s going floorless. The ride is only 6 years old at that park and they invested a lot into it to move it and paint it and theme it, just scrapping it six years later would have to mean it was a total failure which I highly doubt. If a park shuts an E-ticket ride like that there’s something seriously wrong, either a really bad design flaw, corporate is closing the park and wants to move it to greener pastures, or a Rougarou/RMC conversion. Maybe a continuation of the Apocalypse story as a theme?

Not sure it’s the best business decision for the park though. If you look at Patriot on the west coast, a smaller B&M that was Rougarou’d while a nearby park in the other chain already had a bigger floorless, it brought in no attendance. I’m sure Six Flags knows about Dominator and has a plan, but it seems really risky to do that after it already failed like it did for CGA.

If they did that it would dramatically improve SFAm's line up!

I hope it stays. It is the first B&M after all and it is a pretty good standup (my 2nd favorite behind Riddler).

Call me crazy, but I have a theory. Apocalypse is gonna get sent to Great Escape with floorless trains, where it'll get renamed something generic, and then replacing it will be some sort of DC Villian themed S&S 4D free spin to kinda follow along with the apocalypse theming. Thoughts?? (and then also following this, Roar will get renamed to another DC villain and they'll kind of create an unofficial DC supervillians miniland, which would be super cool)

Highly doubt it'll be relocated for a second time. 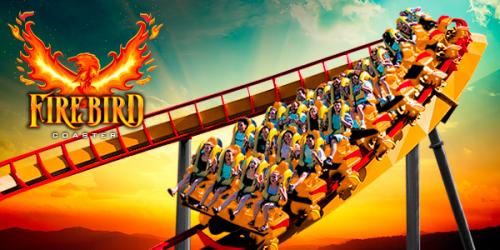 Cool, I like the logo. Will be interesting to see how this rides as a sit-down.

Staff member
Administrator
Moderator
Social Media Team
Well, this has surprised exactly nobody. Good move considering it's a piece of s**t, but still a cop out to sell it as a new ride.

It appears the new trains will only be 6-rows long, instead of the current 7-row trains:-