Ferrari Land to be developed in Spain
Maranello, 13th March
PortAventura Entertainment S.A.U., a subsidiary of Investindustrial, has signed a licencing agreement with Ferrari to build Ferrari Land, a new Prancing Horse theme park, inside the PortAventura resort and theme park outside Barcelona in Spain.

Ferrari Land will cover 75,000 square metres and include a variety of new and exciting attractions for Prancing Horse enthusiasts of all ages, including Europe’s highest and fastest vertical accelerator. An opportunity for the whole family to experience and discover the world of Ferrari.

More good news is that the first Ferrari-themed hotel is also to be built inside PortAventura and will be a luxury five-star establishment with 250 rooms, restaurants and a driving simulator.

The project will involve an overall investment of 100 million euro and the Ferrari theme park itself officially opens in 2016. PortAventura already welcomes 4,000,000 visitors a year, of whom 50% come from outside Spain.
Click to expand...

A few images on this link below:

Kingda Ka clone? Don't mind if I do.

EDIT: It's not a Ka clone, I just got excited. FML.

Europes highest accelerator just has to beat Stealth doesn't it? Fastest is Baco so I doubt it'd break 250ft unless I've missed something.

Meh, hotel looks stunning, area looks a bit sparse for rides bar the signature accelerator. Massive signal of intent with the size of the investment though.

^ Yeah. I misread, some websites are stating "World's tallest and fastest" whereas this official link is just "Europe's". It'll be lower than Shambhala more than likely, they won't impede on that record in the same park, surely.

^ But it says it will be the tallest in Europe as well as fastest?

This looks pretty cool, but slightly weird to have it right next to PA.
E

Isn't RingRacer the fastest in Europe now it's actually open?

I really don't like this investment though. I can't imagine Port Aventura with this stuck to the side. It's a theme park with each 'land' representing a country or area, and now there will be a Car themed land plonked in there too.

The new branded site (expected to open during 2016) will be the sole Ferrari theme park in Europe
and will envisage a total investment of more than €100 million. Ferrari Land will be built on a total
surface area of 75,000 square meters and benefit from several rides (including the highest and fastest
vertical accelerator in Europe), a new premium hotel with 250 rooms and 5 star service, restaurants,
shops and large simulation areas for car racing.This new partnership with Ferrari, the world's most powerful brand for the second consecutive year
(according to the annual Global 500 report, February 2014), and PortAventura (Europe’s second
largest destination resort and the largest in the Mediterranean) will allow the resort to further improve
its position as a leading European destination resort. At present, PortAventura receives nearly 4 million
visits annually, of which nearly 50% are from outside Spain.

PortAventura: an expansion strategy
Over recent years, PortAventura has executed a strategy of continued expansion with the aim of
turning the resort into a leading destination resort in Europe. To achieve this, the company has
developed a strategy of internationalization and the incorporation of new projects every year since
2009 with an investment of over 125 million Euros.

The construction of a new area for children, SésamoAventura, was the first of these investments in
2011, followed within a year by the construction of Shambhala, Europe’s highest roller coaster. In
2013 it was the turn of Costa Caribe Aquatic Park, the resort’s water park, which was extended and
furnished with new record-breaking attractions.

And for this year, the theme park is delighted to launch yet another outstanding attraction: Angkor, an
ride that takes visitors on a boat trip through a lush jungle to face a number of challenges and
adventures. PortAventura also recently unveiled an agreement with Cirque du Soleil, the world's
leading theatre company. During the months of July and August, the Canadian troupe will install its
Big Top in the resort to perform one of its most celebrated shows, 'Kooza'. The agreement also lays
the groundwork for the possible creation of a permanent base for Cirque du Soleil at the resort in the
near future.

Andrea Perrone, Managing Director of Ferrari Brand, the subsidiary responsible for managing
all activities regarding the use of the Ferrari brand said “After the successful experience of the Abu
Dhabi Ferrari World we have received numerous requests to launch new Ferrari theme parks. After a
thorough selection process, we have selected Investindustrial’s solid project backed by skilled and
experienced people and the opportunity to bring the Ferrari allure in Spain where there are a lot of
supporters and fans including a lot of tourists attracted also by the PortAventura destination resort.
“Ferrari Land” will further strengthen the Ferrari brand in the region. “Ferrari Land” will appeal to
entire families as well as Formula One supporters. We will continue to further look at the launch of
additional Ferrari theme parks outside of Europe with no rush, while continuing to maximise the value
of our prestigious brand without diluting it.”

Sergio Feder, PortAventura Executive Chairman: “Since entry we implemented a long term plan
supported by well-known international brands to increase visitors to approximately 5 million yearly
and to transform PortAventura into the best destination resort in Europe. Ferrari is an obvious choice
not only for the values the brand represents, but also for their experience in the Ferrari World Abu
Dhabi theme.

Wow, I now want to visit PortAventura even more! The concert art looks incredible! I like the idea of Europe's tallest and fastest accelerator.


TheCoasterCruiser said:
^ But it says it will be the tallest in Europe as well as fastest?

This looks pretty cool, but slightly weird to have it right next to PA.
Click to expand...

So They are doing a liseberg and are now having 2 launchers?? I'm guessing Baco will be resigned to the kanonen role in the park lol.
M

It will be a massive win for the park. Alonso fans will flock there so it's a great move by them.

If he leaves Ferrari it might not be so clever but he's expected to stay lol.


marc said:
It will be a massive win for the park. Alonso fans will flock there so it's a great move by them.

If he leaves Ferrari it might not be so clever but he's expected to stay lol.

As to it being better then Baco, it will probs have the same train seen on Formula Rossa so I feel as it is pretty much a Stealth clone (maybe a little larger) which it pretty much looks to be, then it won't be any rougher then Stealth and Stealth isn't rough so that's a positive!! Great Move overall and I will be booking flights when it opens! Plus this has to biggest investments into a European park ever, if not the biggest, £100 Million is huge!

This is an incredible move by Portaventura, it shows they're genuinely interested in challenging Disneyland Paris; are there any non-Disney or Universal resorts that have more than one park? I can't think of any of the top of my head.

They keep referring to it as a new 'park', but it does seem to be more of a new land. I'm guessing it will be a mini-park joined onto the hotel and adjacent to the main park? That's the great thing with Ferrari; it's a strong enough brand that it doesn't need to take up a massive space. Even though I personally have no interest in it, it's a really great choice; it's not a tacky brand, it's popular all over Europe, and it's one of the few things worldwide that can really challenge the Disney and Universal brands for interest. I'm a bit of a sucker for Stealth (yes, and Baco as it happens), so however big the coaster is I'll be happy. My guess would be about 240ft.

I really thought after Shambhala they might get into a bit of a rut. I'm seriously impressed.

TheCoasterCruiser said:
^ But it says it will be the tallest in Europe as well as fastest?

This looks pretty cool, but slightly weird to have it right next to PA.
Click to expand...

Ah yes, okay. Thanks for clearing that up! :--D


TheCoasterCruiser said:
^ But it says it will be the tallest in Europe as well as fastest?
Click to expand...

How could it possibly be taller and faster than pmbo???

Brilliant news though for the park, let's how they ditch Baco to make room for it and it'll be a completely top place.

^Unless you're double-triple-quadruple bluffing...furie's making a point about Blackpool falsely advertising Big One as tallest/fastest etc. long, long after it held the records :lol:

Oh, okay didn't know anything about that. 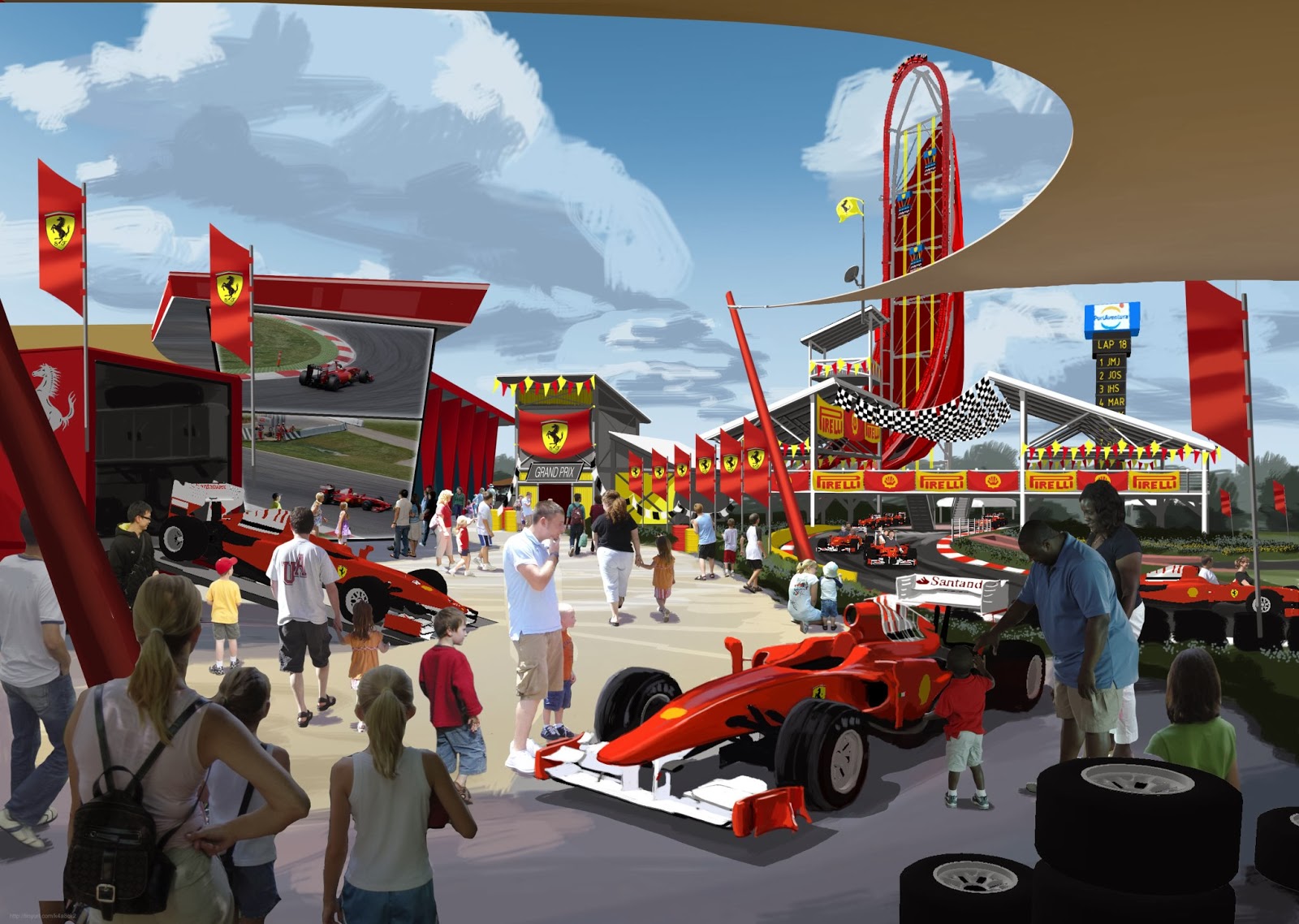 From this angle it definitely looks like something the size of KK/TTD! Plus you can clearly see a drop tower structure on the top hat as well.

This is double odd PA already has the fastest launcher (as well as fastest overall coaster) in Europe with Baco, and the tallest one in Shambhala. I know concept art should be taken with a grain of salt, but still this could be true since why construct a "similar" ride if not to smash all those previous records and go with something 100m plus?! It would be bloody awesome if true! :--D

So is this a completely new park or is it just a new area? Seems like every other thing I read is differing, or I'm just struggling to understand the wording.

Love Accelerator coasters and this is probably the number one park on my wishlist. Combine that with already planing a Europe trip in 2016 starting or ending in Barcelona, I'm definitely excited. Don't care about Ferrari or racing at all, but will definitely go.


tomahawKSU said:
So is this a completely new park or is it just a new area? Seems like every other thing I read is differing, or I'm just struggling to understand the wording.

Love Accelerator coasters and this is probably the number one park on my wishlist. Combine that with already planing a Europe trip in 2016 starting or ending in Barcelona, I'm definitely excited. Don't care about Ferrari or racing at all, but will definitely go.
Click to expand...

^^I'm pretty sure it's a new area. The first couple things I read I thought it was a whole new park though