Those who know me I am a massive fan of the Balkans and travelling around that area. So its with great delight I noticed that the pretty sparse Luna Park in Skopje, Macedonia is getting a complete rework. https://rcdb.com/15087.htm

The park will have 1 roller coaster and a total of 27 new rides.

Below is some concept art for the park that was recently released. The eagle eyed among you will notice the roller coaster on the art is identical to the Schwarzkopf 2nd gen speed racer Aconcagua which was removed from Parque de la Ciudad in Argentina in 2015. Aconcagua is essentially Nessie from Hansa Park without the loop.

With Big Blue (formally Twist and Shout from Loudoun Castle) opening in Croatia soon it seems this part of the world is almost the new South America for rescuing old Schwarzkopf coasters. Additionally we have Toshimaen's old shuttle loop opening in Holland and on recent evidence maybe even Knightmare opening at Southport. If Attractiepark Slagharen's Thunder Loop pops up again in Europe that's 5 Schwarzkopf's reopening in europe in a very short period of time.

For reference here is a pic of Aconcagua while it was in Argentina.

As a disclaimer it was originally believed part of Aconcagua was scrapped when it was taken down making it very unlikely this is actually the ride. However I've never seen proof of this and the ride was taken down rather than demolished.
Last edited: Jul 12, 2017

This is fantastic news. Can't bear to see an old Schwarzkopf go. Much better that they go to these up and coming places that have little else cred-wise.

While this sounds like a very interesting development, I'd take the fact that this might be Aconcagua with a pinch of salt. The ride had been rusting away in Argentina for more than a decade and the fact it would all of a sudden make it's way to Macedonia is rather unbelievable to say the least. I'll keep an eye on the project, though.

There's no way possible that Aconcagua could be rebuilt as it was installed at Parque de la Ciudad. That render shows a 3D coaster model downloaded from Google 3D warehouse just for rendering purposes. It includes the original station which was also completely torn down and destroyed. I was there, the rollercoaster itself was completely dismantled with blowtorch and scraped.

Only a couple of years later a master plan has been submitted for approval. We will have to see if anything comes of this long delayed project but we can hope. 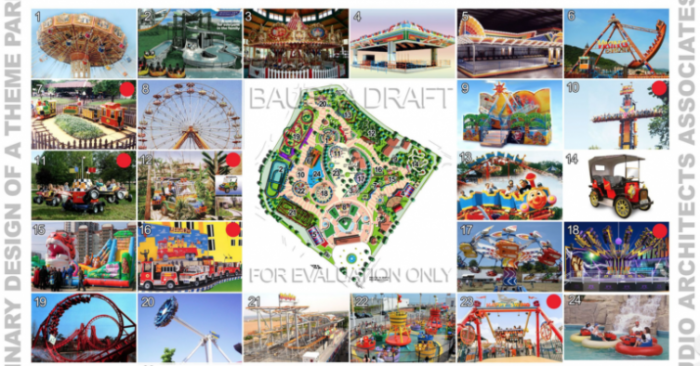 Well, if this comes to life, it could become the biggest amusement park (or at least compete with Fun Park Biograd) in the former Yugoslavia. That's quite a lot of coasters in there now.