The ride looks and feels very similar to Manta in the concept art with the colours reversed and a bat instead of a manta on the front of the train. All in all B&M look to be having a very busy 2015.

Personally its a shame they didn't go custom but it's good to see Japan get a decent new coaster.

Well it's much better than the S:UF ones, so that's a plus I guess. Nice to see Japan getting some new coasters as they don't seem to have gotten many new ones recently.

I thought it was OK, not amazing by any stretch of the imagination, but it's an alright coaster.
P

Nice to see the park investing in something big again. I'm really not a fan of flyers so I'm not excited by what they've gone for. Still I hope it does wonders for them (I also can't wait to see a keyring of hello kitty riding it).

Manta is currently rated as the best B&M flyer in the world according to the Mitch Hawker Poll (I discount Sky Scrapper ranking higher with 11 riders - hardly an accurate sample), so good move in picking up the most popular flyer design.

A bat? Really? I know China prides itself on blatantly ripping off western design and copyrights, but this is just plain dumb.

^This. Bats are a fine name and theme for a flying coaster, but when the track and trains have such an obvious ocean related color scheme, it just seems really dumb.

Not sure why they have to call it Acrobat instead of just Bat either...that just makes it seem even dumber. Adding that play on words just seems unnecessary. :?

Other than that, it's interesting to see another flyer being built, and it's nice that the park will have another major coaster. I wish it was a unique layout though.

Hahaha they have so blatantly just edited this photo 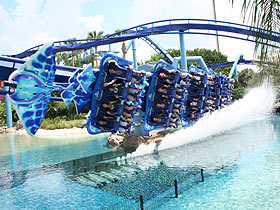 Manta is brilliant so I'm happy about this

This is awesome news, Manta is fantastic and my favourite flyer thus far. I also love flyers so happy to see another one.

Love B&M flyers and I am glad to see a new one. Especially in Japan where theres been hardly anything new for years.

so in my opinion a very good ride but not the best.

I can't be the only one to think the only reason that currently it looks like that is because it was a quick image manipulation and the final result won't actually be the same?

^That's possible, but I think that they would have edited the pictures to include the coaster's real colors and appearance if the actual color scheme was different. The colors in the picture are different from Manta's, so it's not a direct copy. Since they bothered to change the colors in the picture, I would think that's the appearance they're going with. (I, however, know very little about picture editing, so maybe this picture was significantly easier to edit than whatever the actual appearance would be. Just giving my thoughts.)

It's also worth noting that there is teal B&M track floating around somewhere that, as far as I remember, doesn't have a definite location yet. At the very least, I think the track is the right color.

The trains seem like they are a quick edit, so I don't know if that is the final appearance or not.

^ What they've done is a really quick edit actually, they've changed the saturation and hue slightly, overlaid new shaping to the zero car and added a few extra elements (birds etc in the sky). Also, on the visual a the top (the larger image), they've combined an illustrated piece (my guess is it looks like it was done in AI, due to the shading and crispness of the lines and patterns) with the photo of Manta's water dive

It is very possible that they will keep this colour scheme and if they do, it really doesn't matter. It looks good.

Yeah the track and supports are already at the B&M Plant so its almost certainly the right colours. Let us not forget Diving Coaster at Happy Valley, a Sheikra clone that pretty much looks the same.

It wouldn't surprise me if Acrobat ends up looking just about the same as Manta.

Looks like the first few sections are up. Including the brake run, parts of the station and oddly the mid-course. It's like a reverse Manta colour wise

Any chance this could be shifted to the Construction forum now please ? Was going to make a new thread but seemed needless.
R

As much as the fallout from the SD2K accident probably cost the park, I'm not surprised at all that it took them a while to get another coaster. Despite being landlocked (actually water on three sides) they do have some room for expansion within the park footprint, so it was just a matter of time before something filled the area.

...and it's not like they don't already have a fair number of coasters.

Thanks to Jordan bringing to my attention, I didn't realise this was at Nagashima Spaland, I assumed it was somewhere in the arse-end of China :lol:

So the good news is, I'll be riding this in September, if it's anywhere near as good as the coaster it's cloned on, it'll be amazing.

^I really love the colour!

The ride's pretty much done. Testing's either happening, or is going to happen in the next few weeks.