The summer chunnel became tradition this year, but we’re having to delve deeper into the country each time to get something out of it. Fortunately France seems to be on the up when it comes to good investments recently, so lets check a couple of them out.

For some reason the main road to this place from Calais takes you through the middle of Paris, which was less than ideal given the length of the drive. There were wild plans of a more ambitious cred run on the cards, but we arrived already overtired and stupidly hot in the middle of the afternoon and only just about managed to drag our feet into this place. 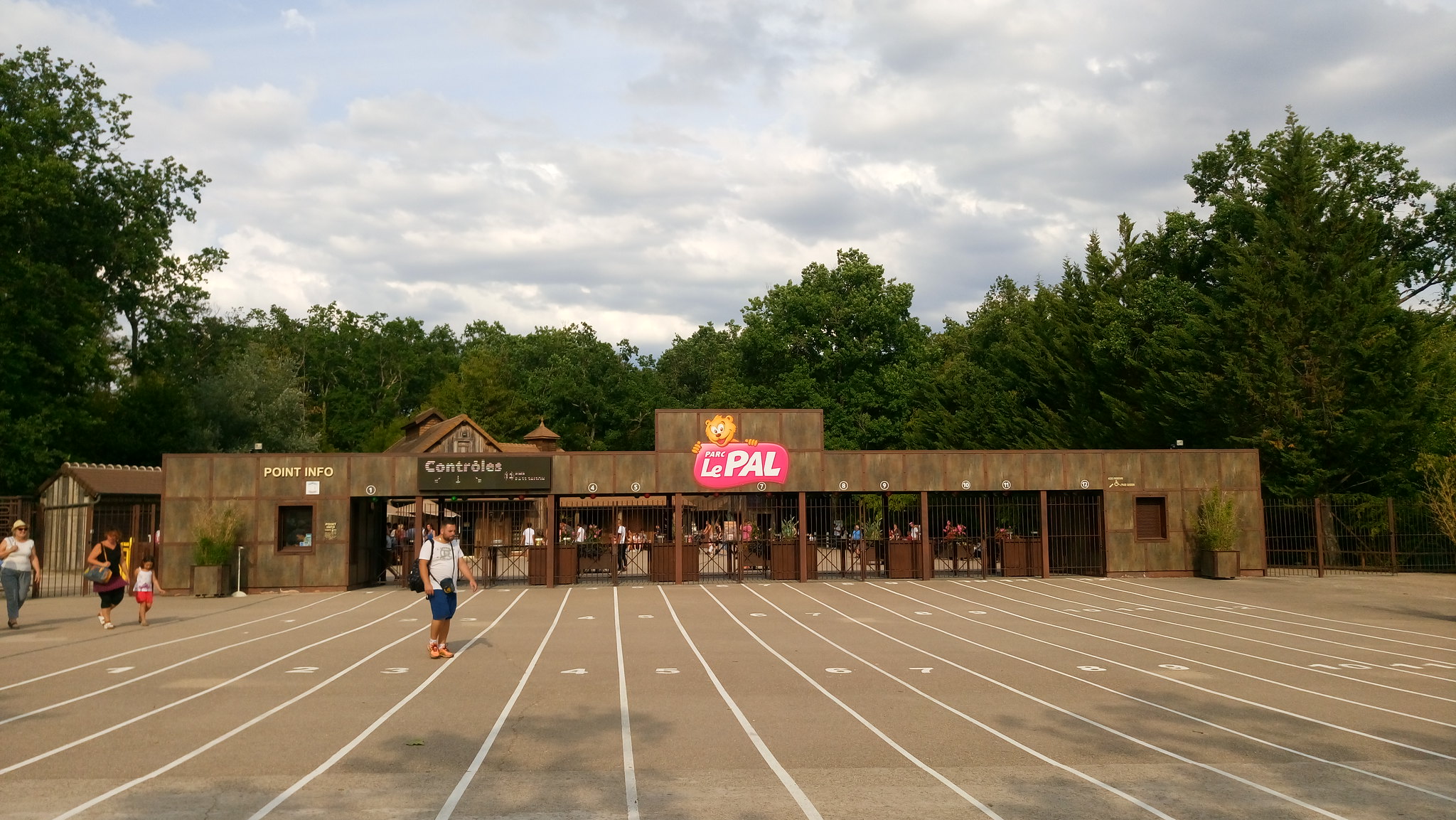 In anticipation of greater plans (or not wanting to suffer queues in the heat, as previously experienced on July weekends in France) we also picked up a fastrack deal for this place as it was only 6 euros on top of entry to skip 6 major ride queues. The system was unusual, using a pink plastic wristband that had tear-off tokens – one for each ride. It was a little tricky to do from your own arm, particularly while expectant ride staff are watching you struggle and operations are being held up. 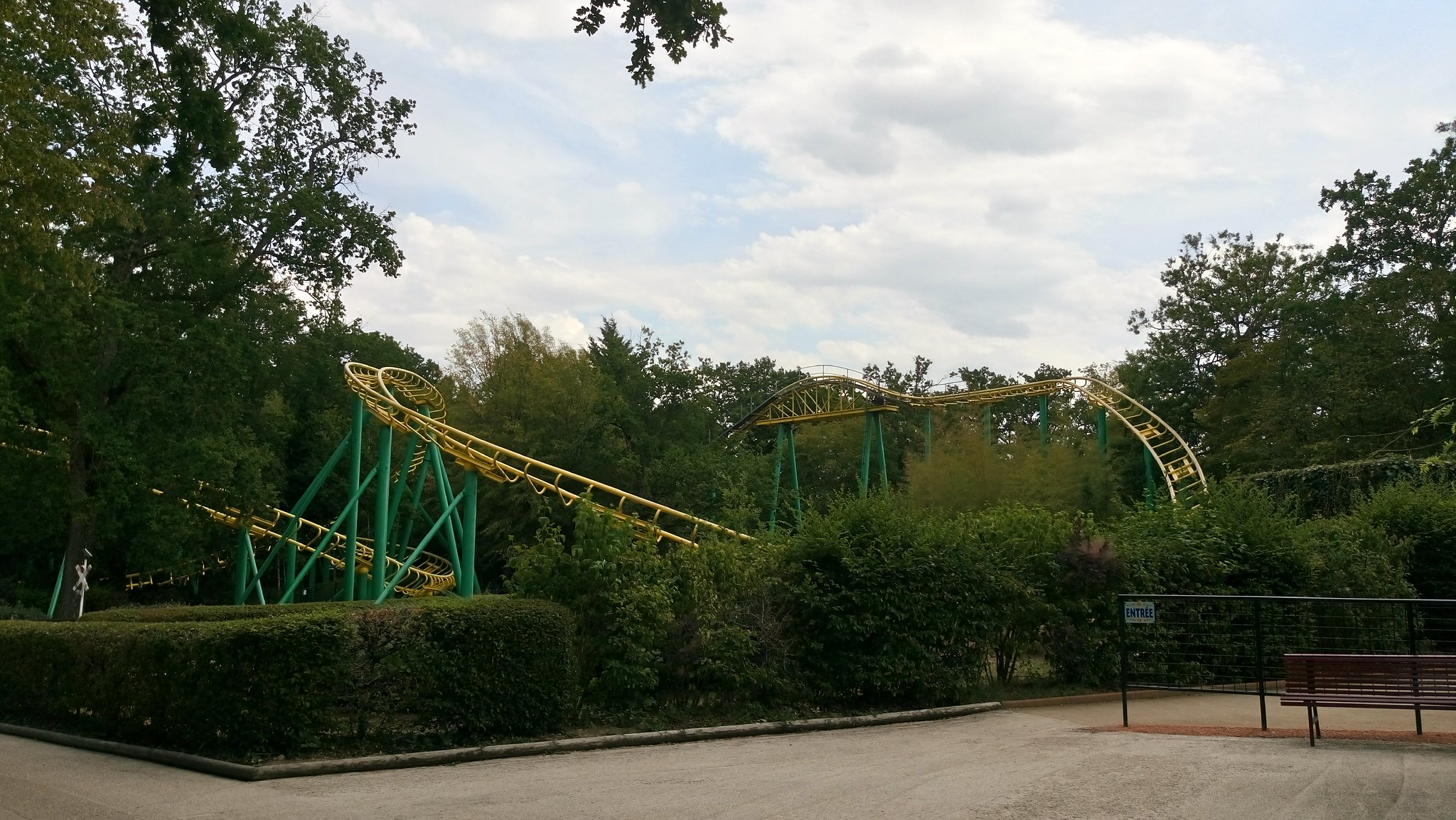 Did you know that Reverchon made something other than a spinner? Well here’s one of them. Look at that beautiful B&M inspiring drop entry. 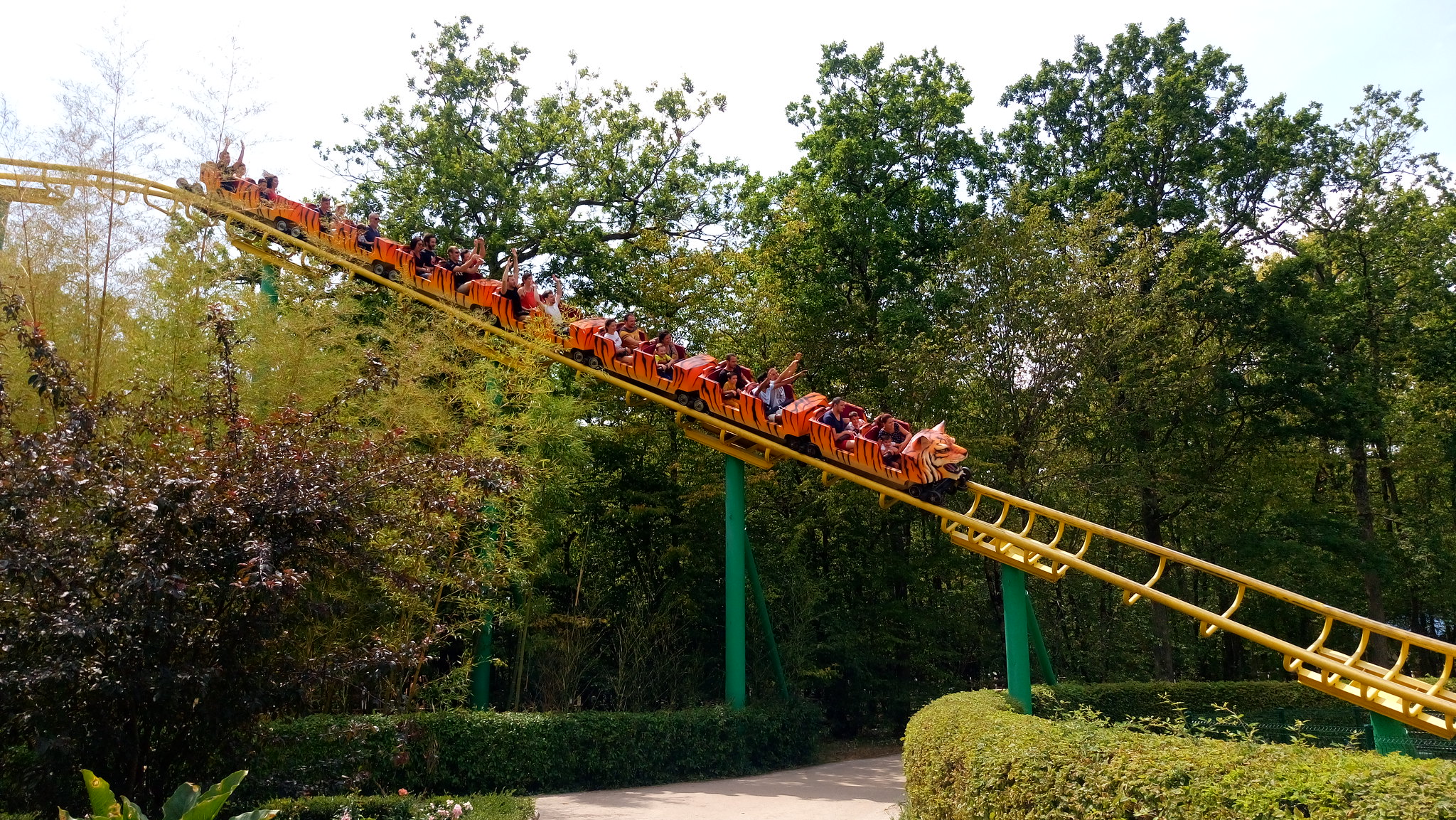 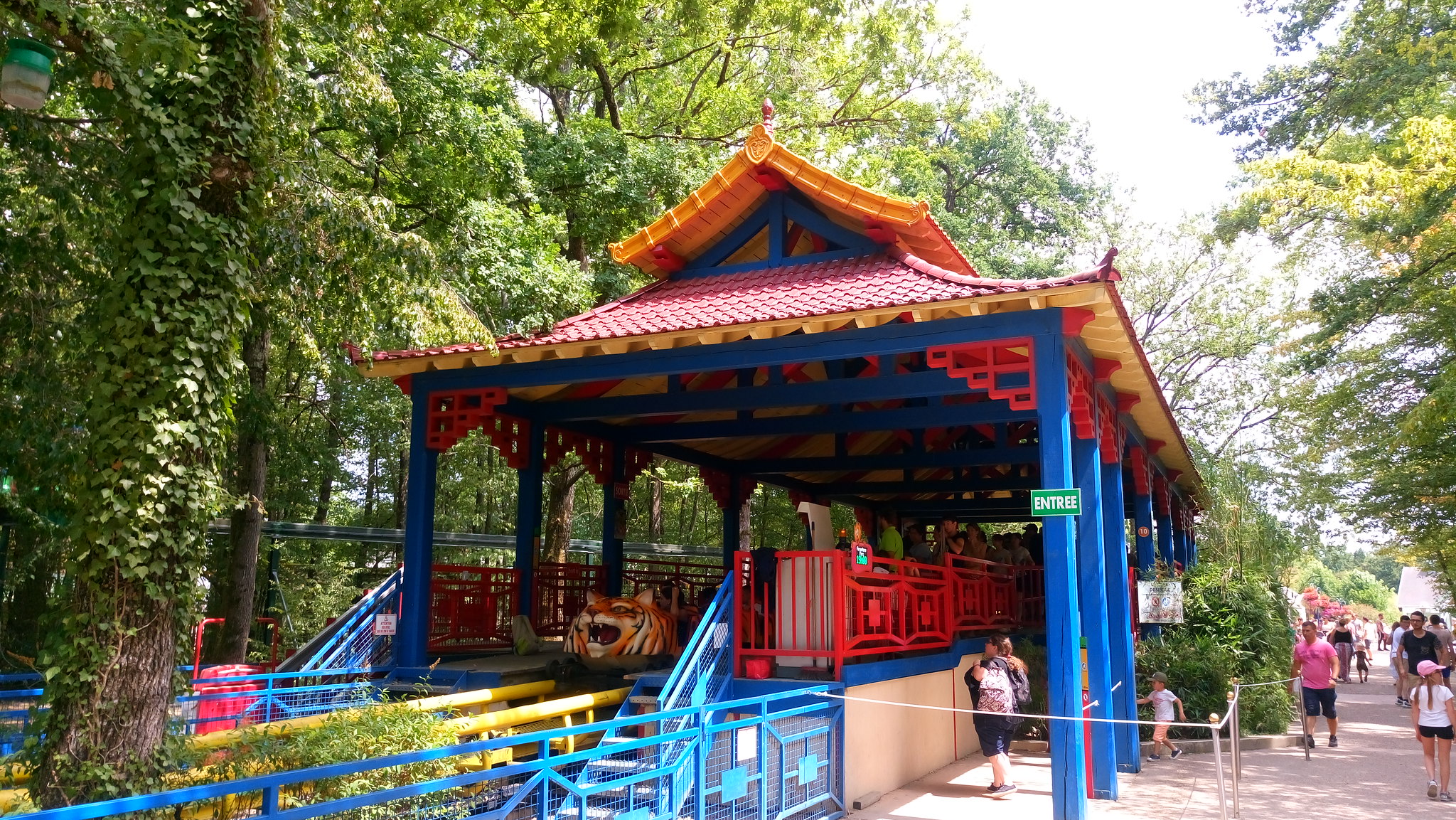 Good face on the train, asian themed station, what more could you want?

From there we skipped the queue for Azteka, which broke down in front of us. Don’t be spitey Soquet.

Talking of spitey, better get the Intamin out of the way. French Juvelen - Sascha Czibulka’s favourite ride. 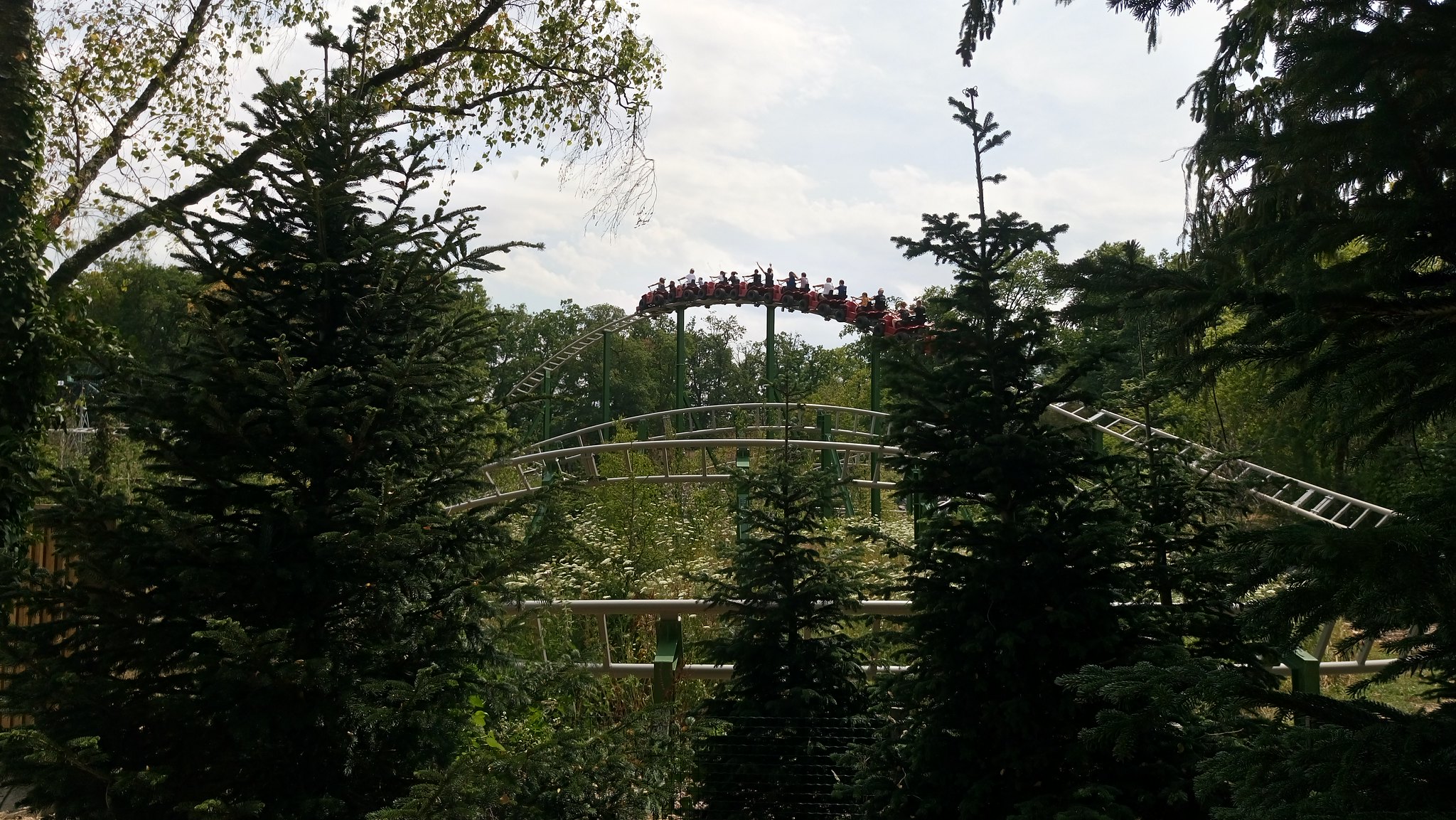 I like Juvelen a lot. It packs a real punch for the size and audience. The turns can get really forceful, there’s a couple of whippy transitions and the second launch really grabs and drags you hard. 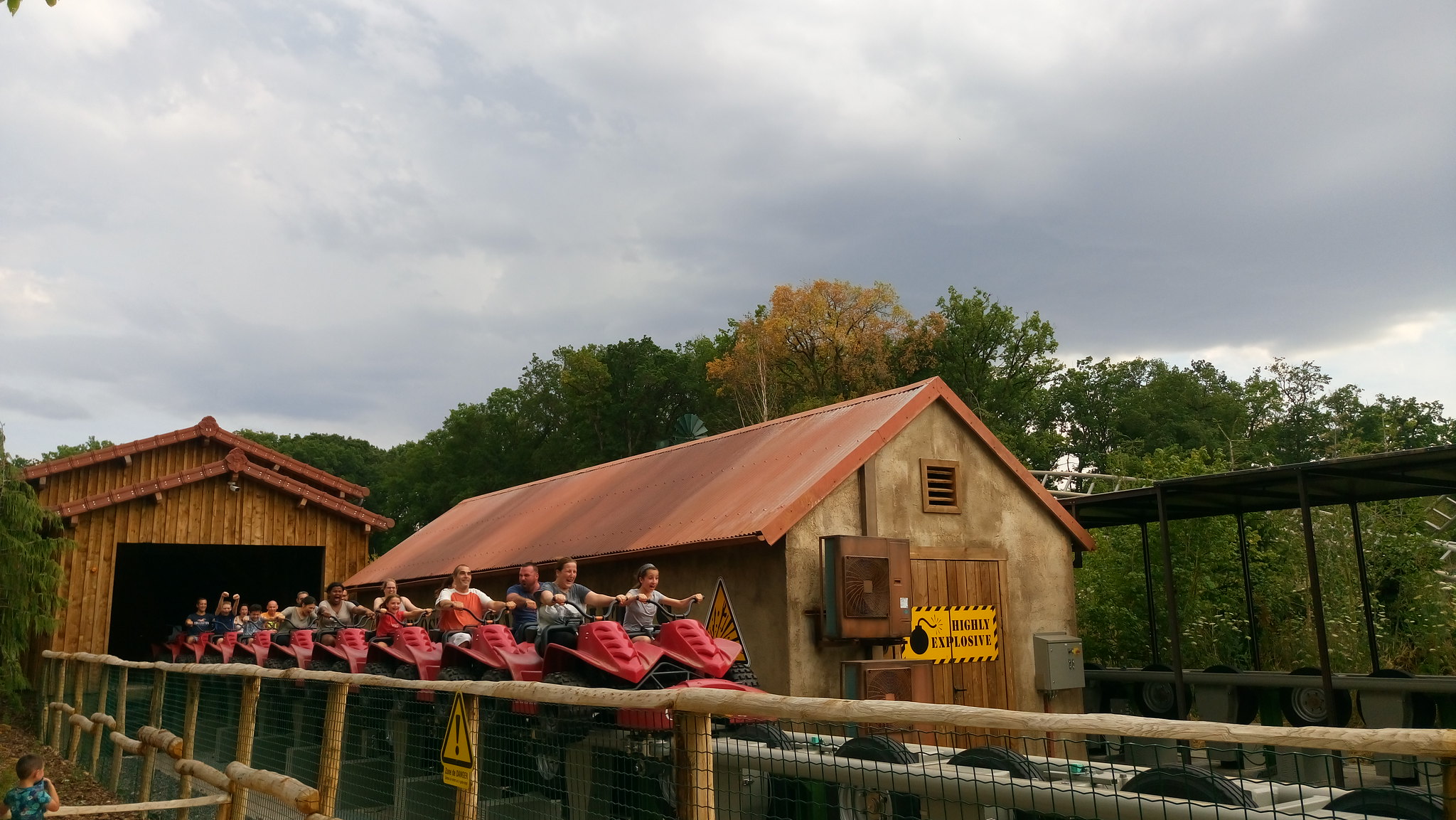 Yukon Quad doesn’t quite meet the theming standards of the original. The preshow contains only revving noises and smoke rather than the statues jiggling their spears. 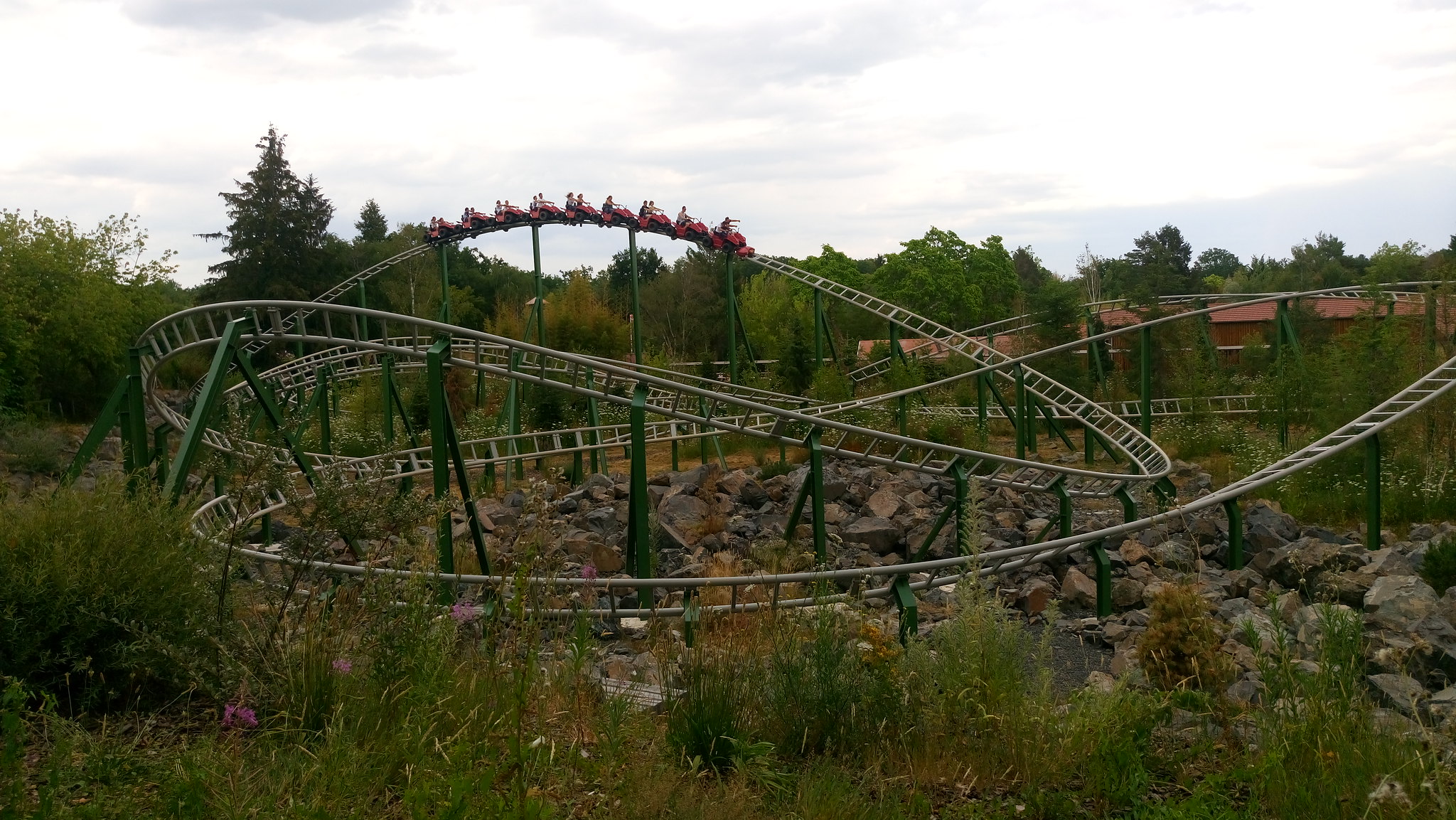 The outside area looks to be nicer, but doesn’t really manage it on ride. There’s a bit more consistent landscaping throughout with the rockwork and it’s all a lot more accessible for pictures – you can get around the outside of most of the layout. But the rocks are just there, where Juvelen has the archways/pillars and water features that give a little interaction before it becomes a field at the end. 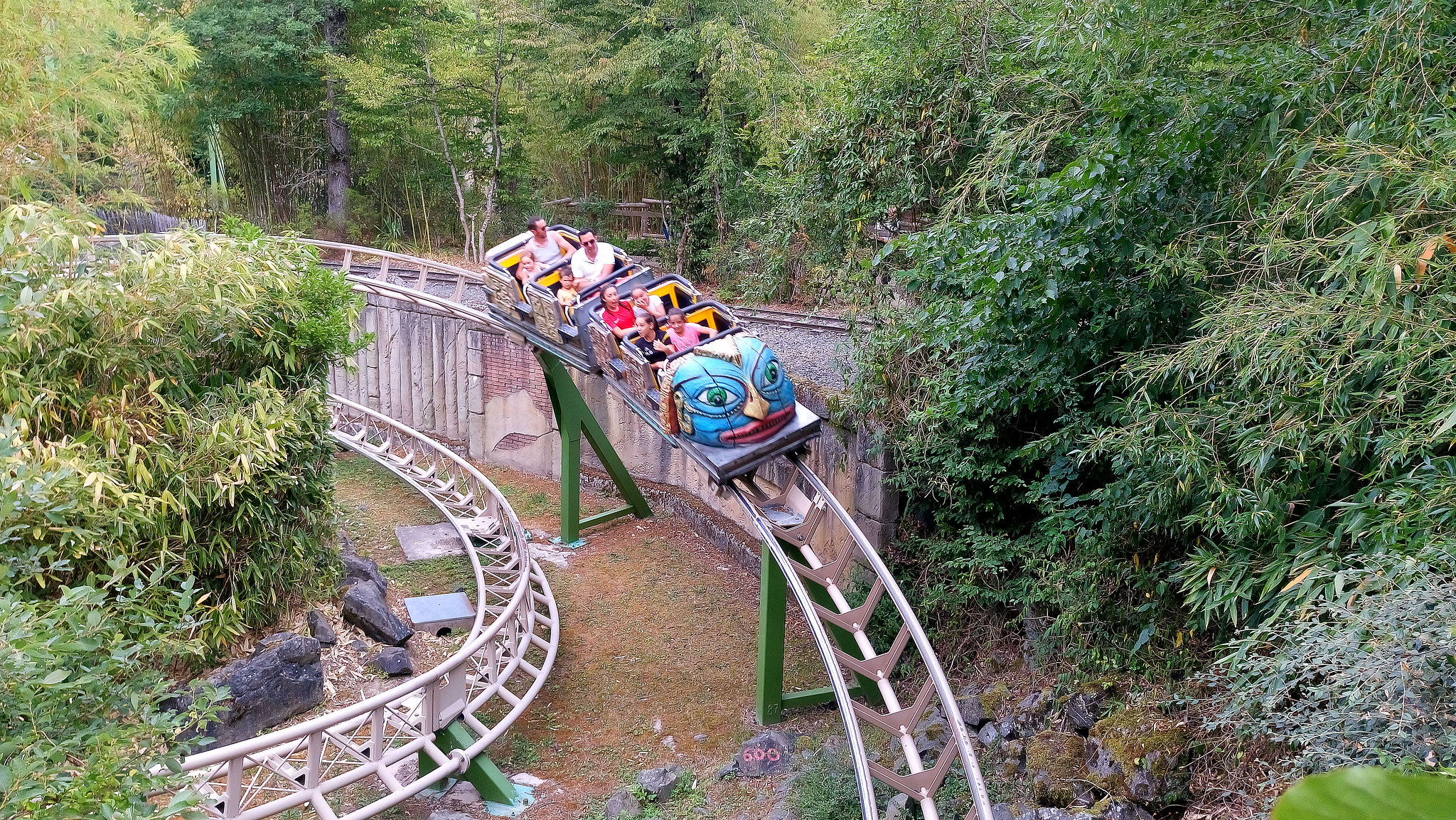 We then stumbled back on Azteka the very second it happened to reopen. This park has a good train face game – love this one even more. 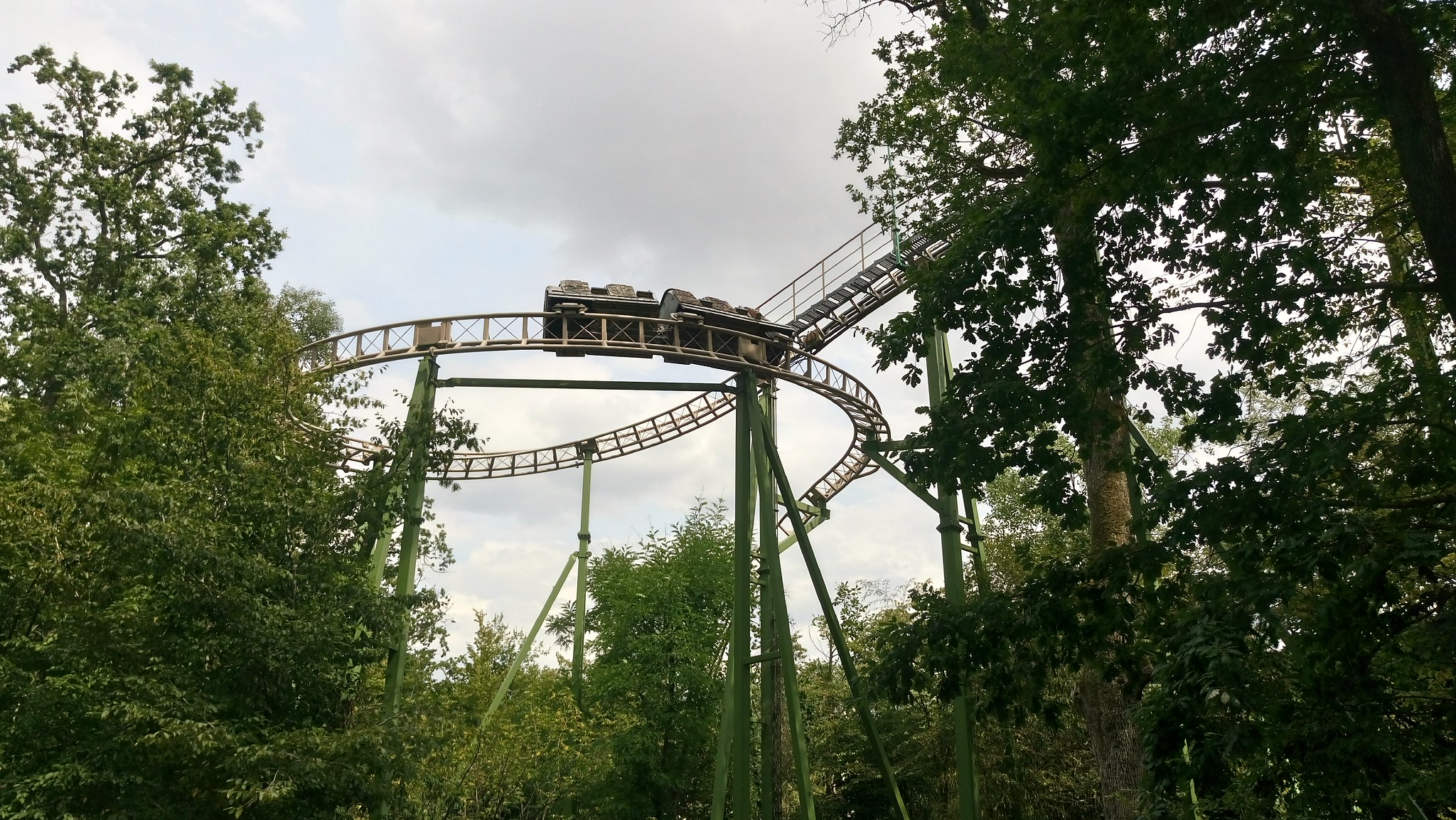 Might be my new favourite Soquet (sorry Gaz Express). It moves with a real sense of purpose, it has character and it kicks some ass. Starts off bigger than I expected, helixing then hurtling down that first drop. Some forceful and shaky turns follow before a Shambhala style zero-F hill, rounded off by another helix with square corners. Quality. 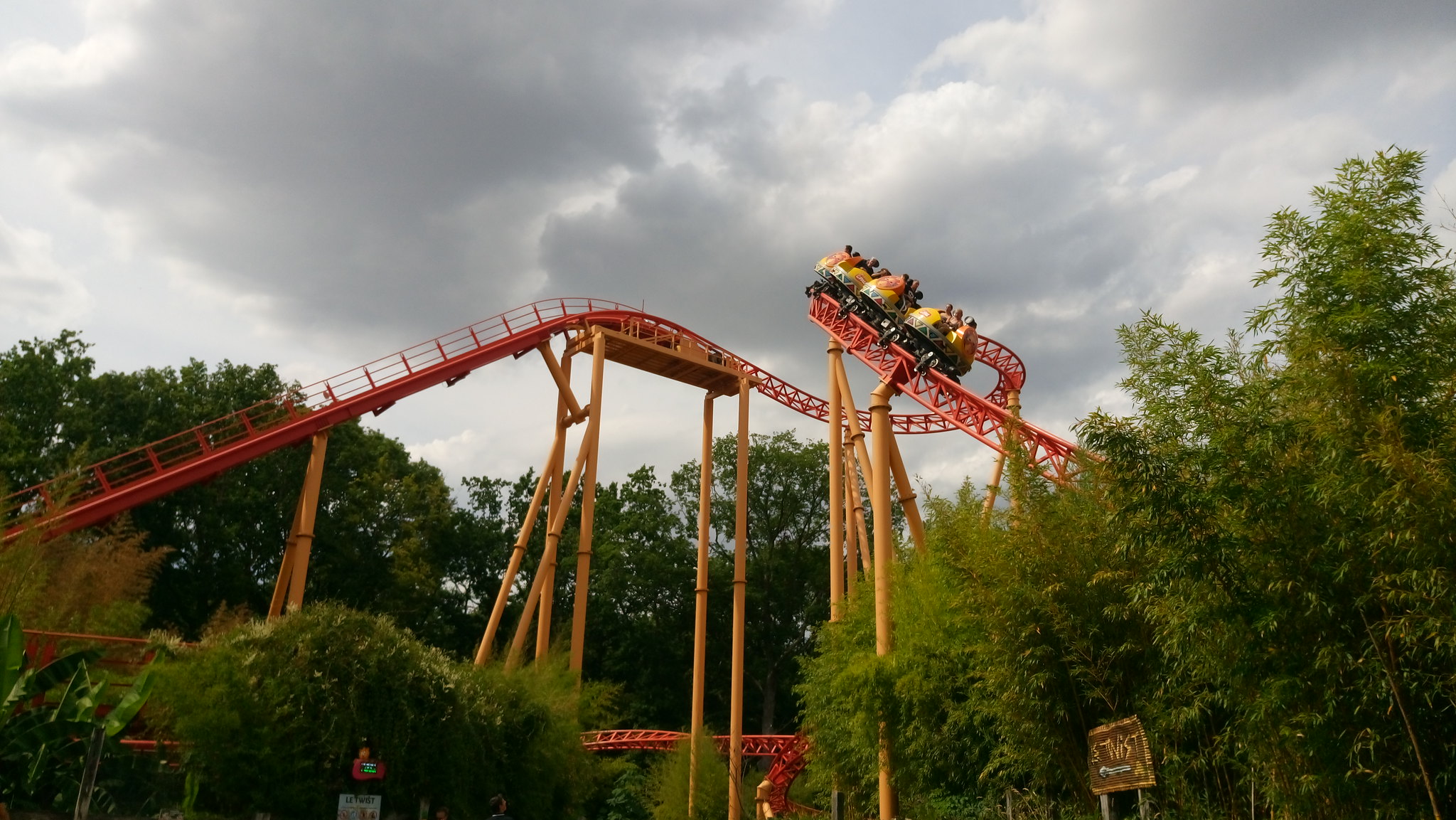 Talking of quality, better get the Mack out of the way. I was going to say French Dwervelwind, but this came first, so French Dutch Twist. 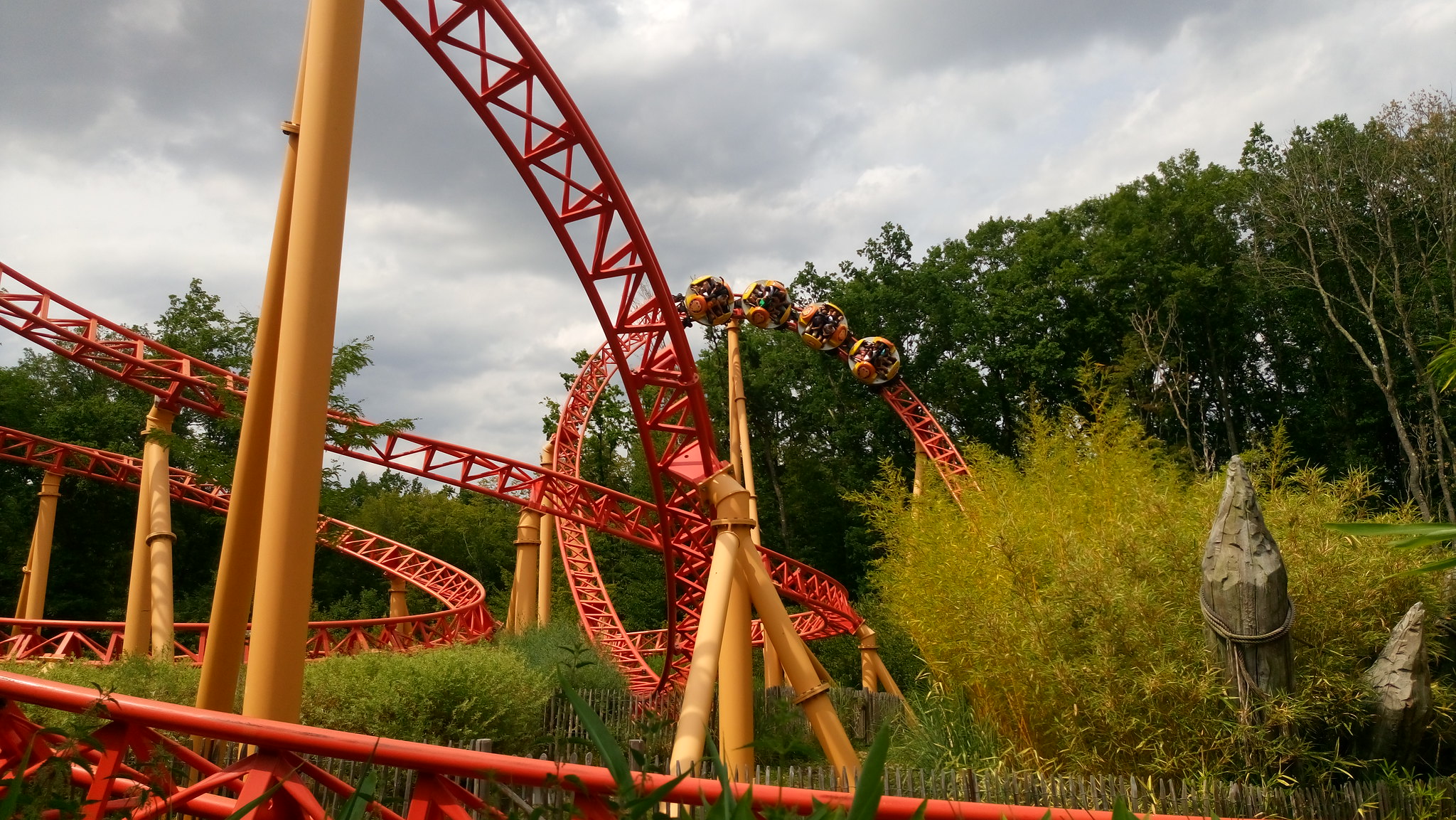 It lacks the on-board sound and we only gave it one opportunity (where Dwervy was only really good in 1 out of 3 attempts), but it grabbed that chance and rode very well. 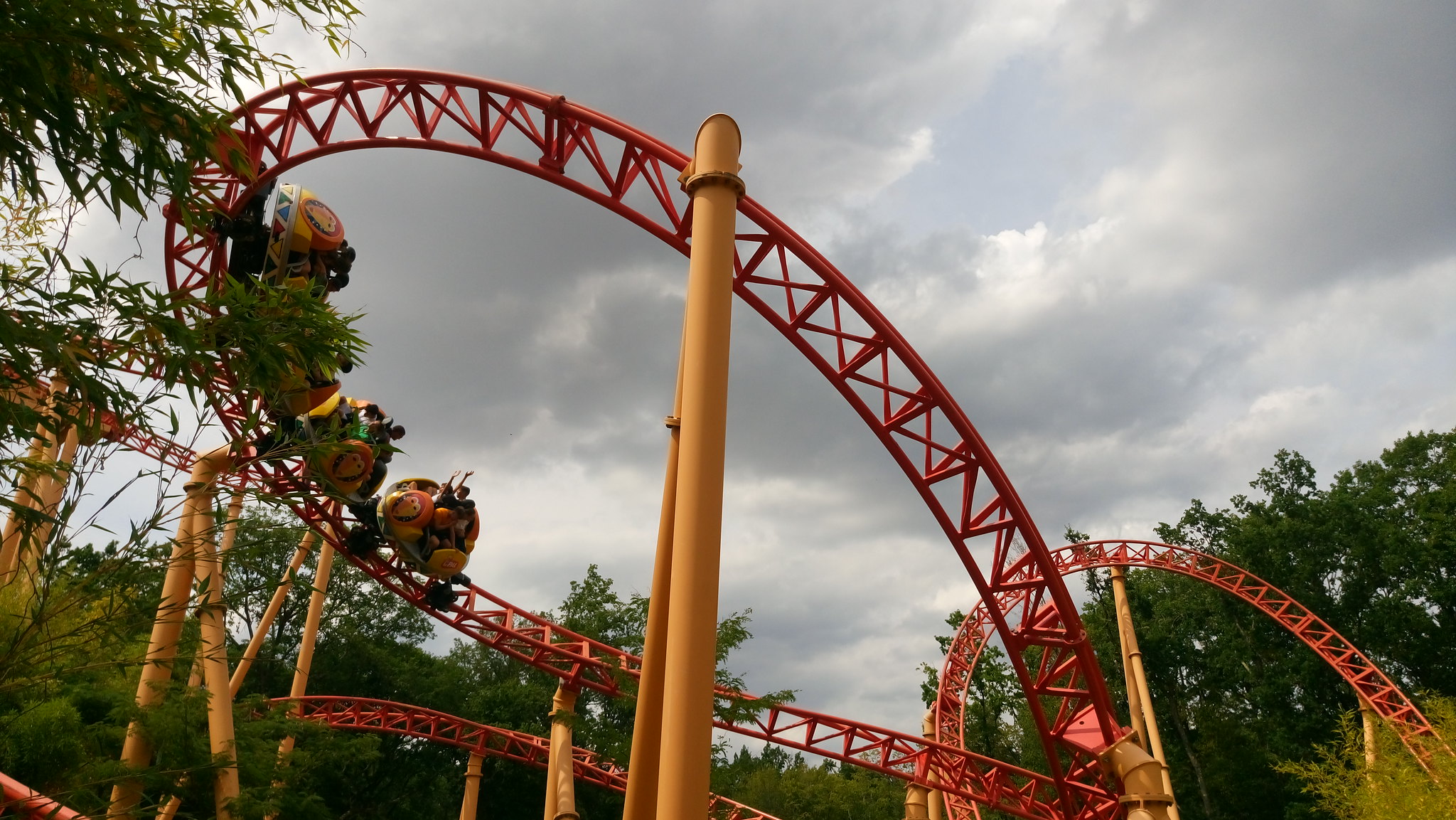 Forceful spinning, twisty layout. There’s a fun little lurch in a sharp downwards transition that I haven’t noticed before. Bit too short though, ends with a underwhelming sense of abruptness just as you really get into it.

Creds complete, we considered the Disko for the sake of using its fastrack but it had no queue to skip and they suck. 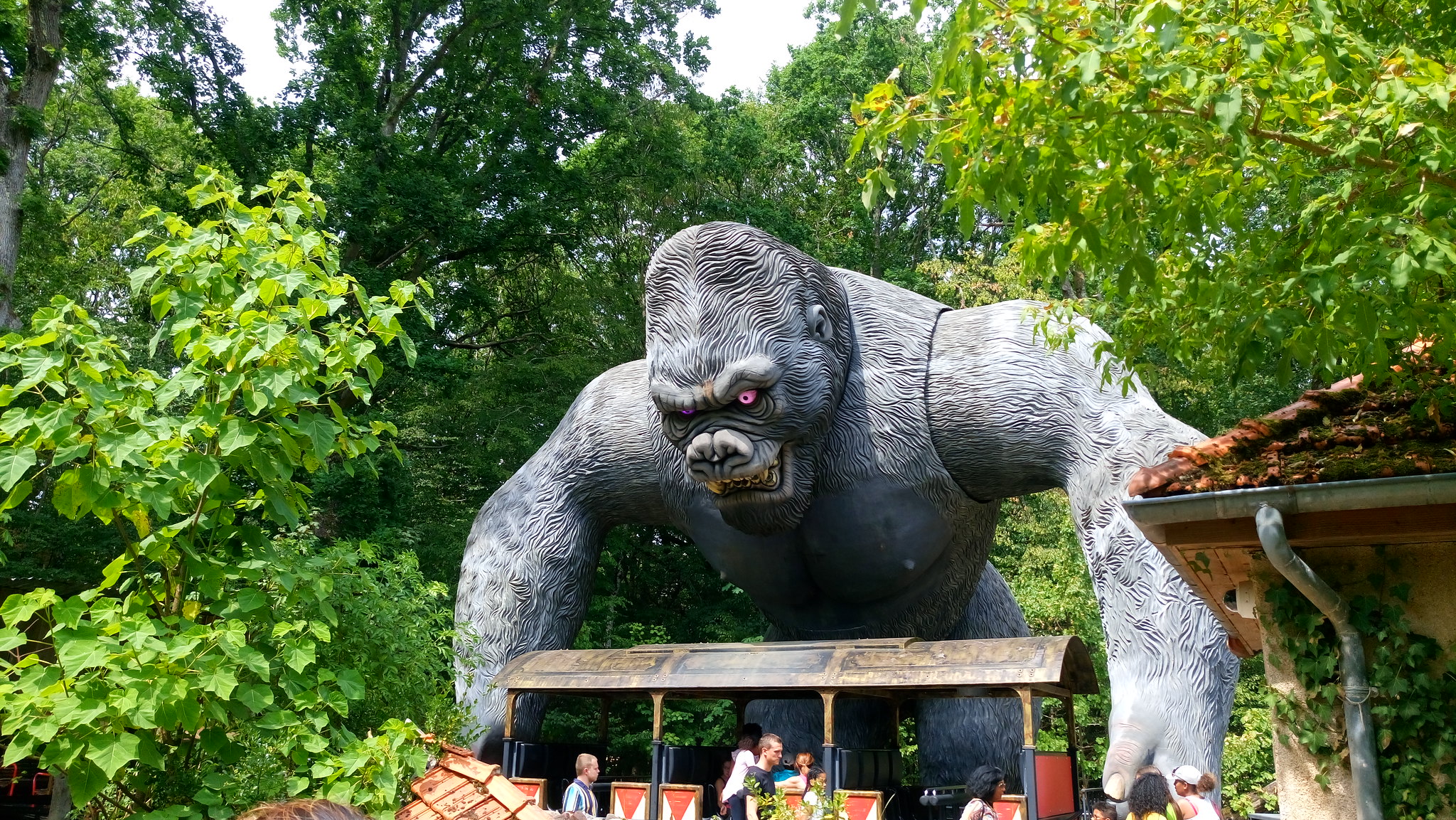 Did this instead because it amuses. Didn’t know there were so many of them, my King Kong flat count is up to 3!

The water rides were also included in the big 6 rides, so took a courtesy lap on them, skipping the most significant queues of the park. All paid off.

Log flume was short and mostly pointless. Potentially the same as Walygator’s, realising as it sets off that it’s just a bit of meandering before a single drop.

Rapids was alright. Bit on the tame side, not wet enough for a hot day. Soquet didn’t try and channel Hafema here sadly.

Too hot for more rides. Impressed a lady with my French and had some ice cream instead.

Checked out the animals. For normal people, this place is actually more zoo than amusement park. 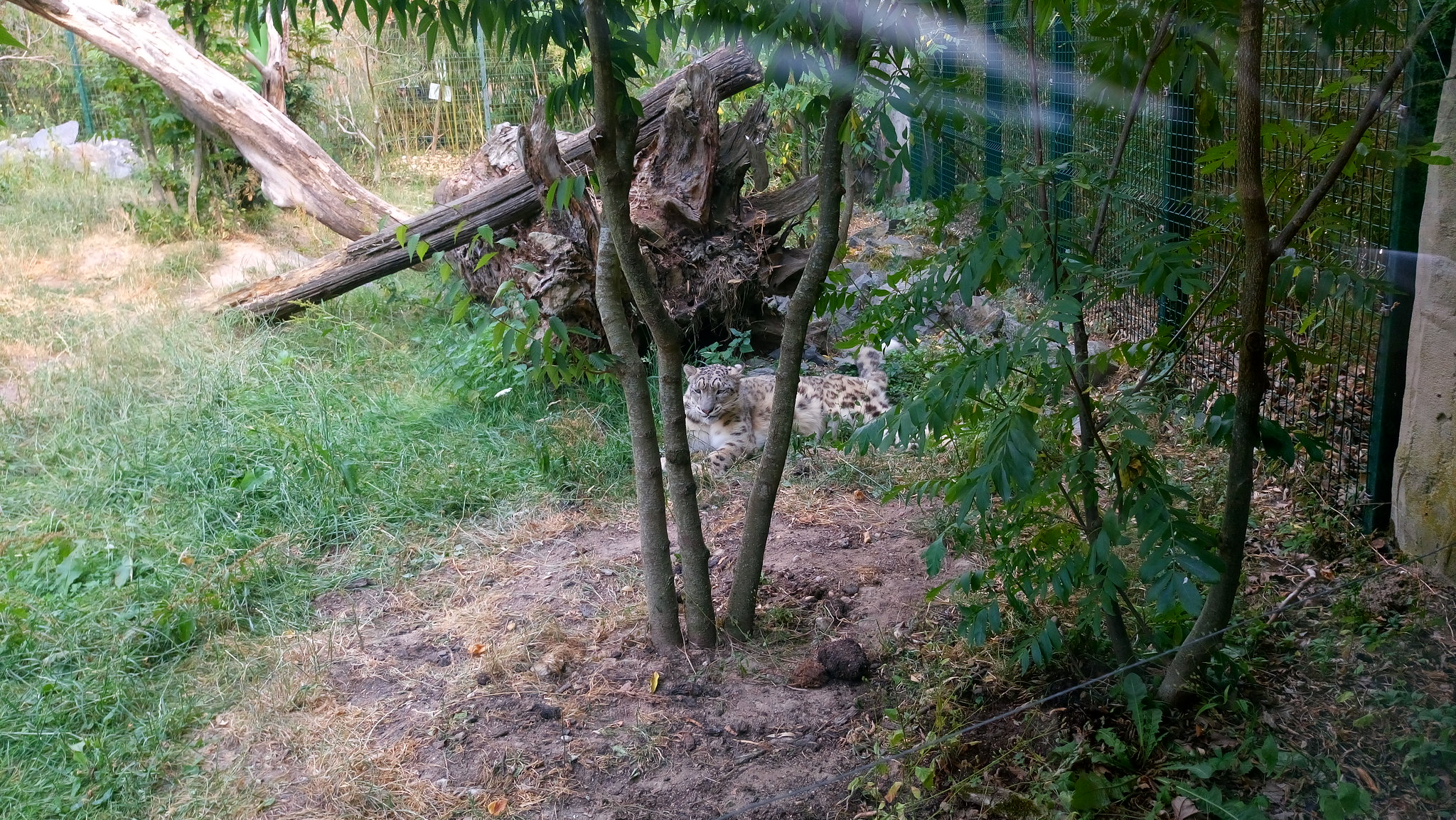 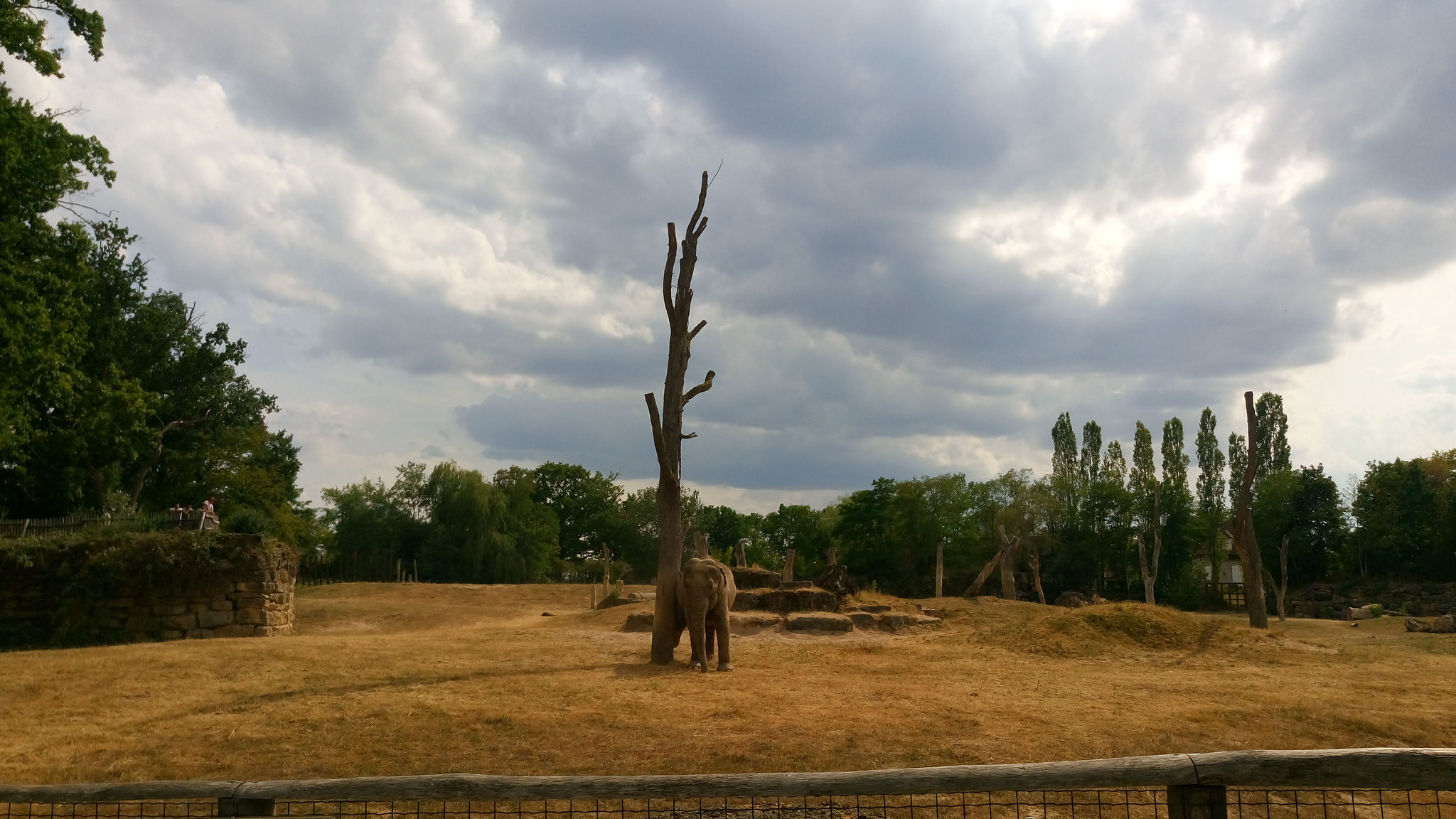 Too hot for elephants? Probably, they were covering themselves in dust and then trying to topple this tree.

Too hot for more.

And that was Le Pal. Liked it more than I had anticipated from when it was just that place that irked me by getting a Juvelen clone. Nice little place to spend half a day.

Up next? Clue is in the title.

Another scorcher of a day found us in hilarious car park antics in which 50% of the locals would outright ignore the staff directing them into spaces and do their own thing, mess it up because it was a tight squeeze, then speed off in disgust and instantly get stuck behind pedestrians. 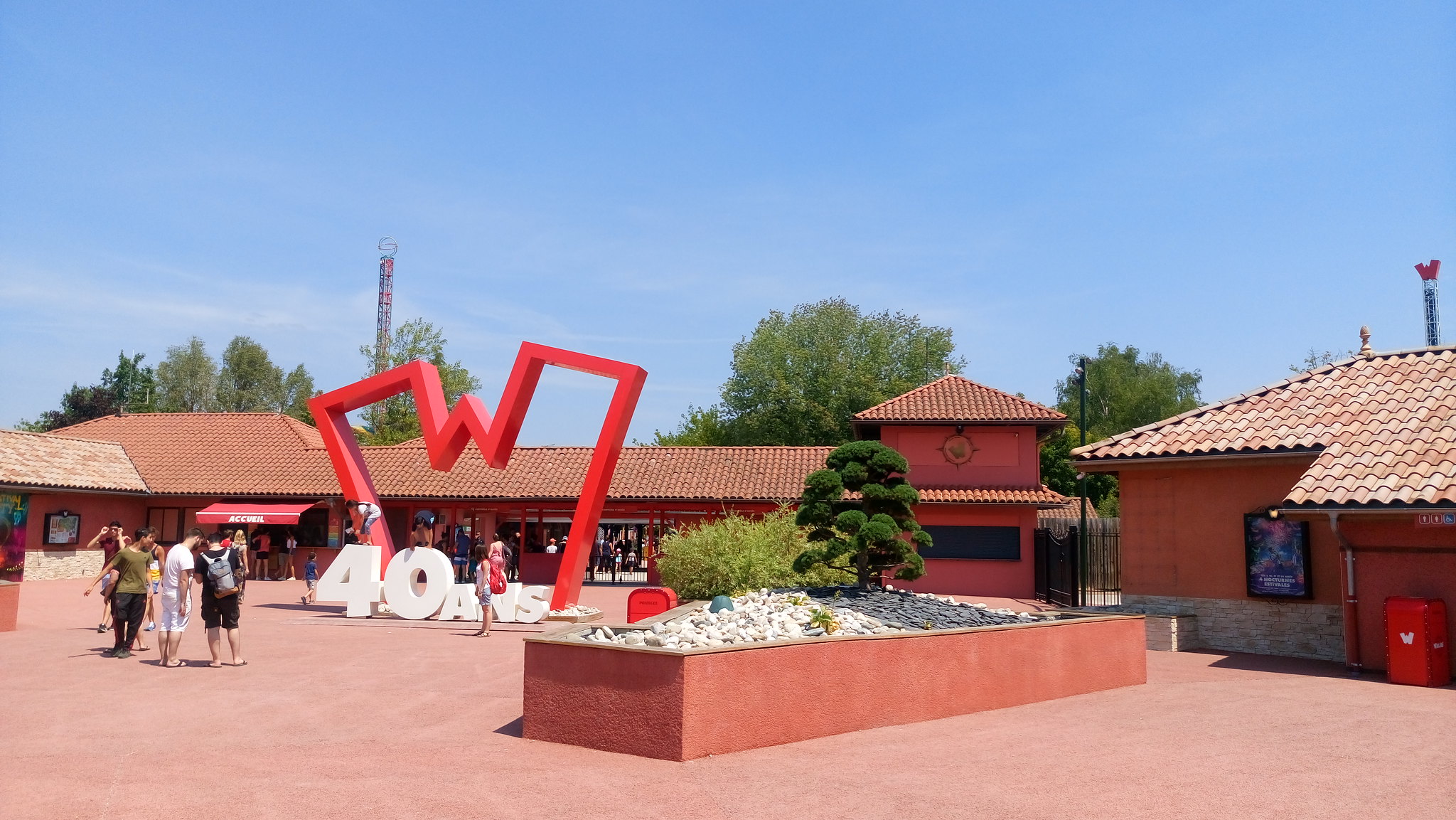 With that fun out of the way we headed in to the great 40th birthday present they gave themselves. 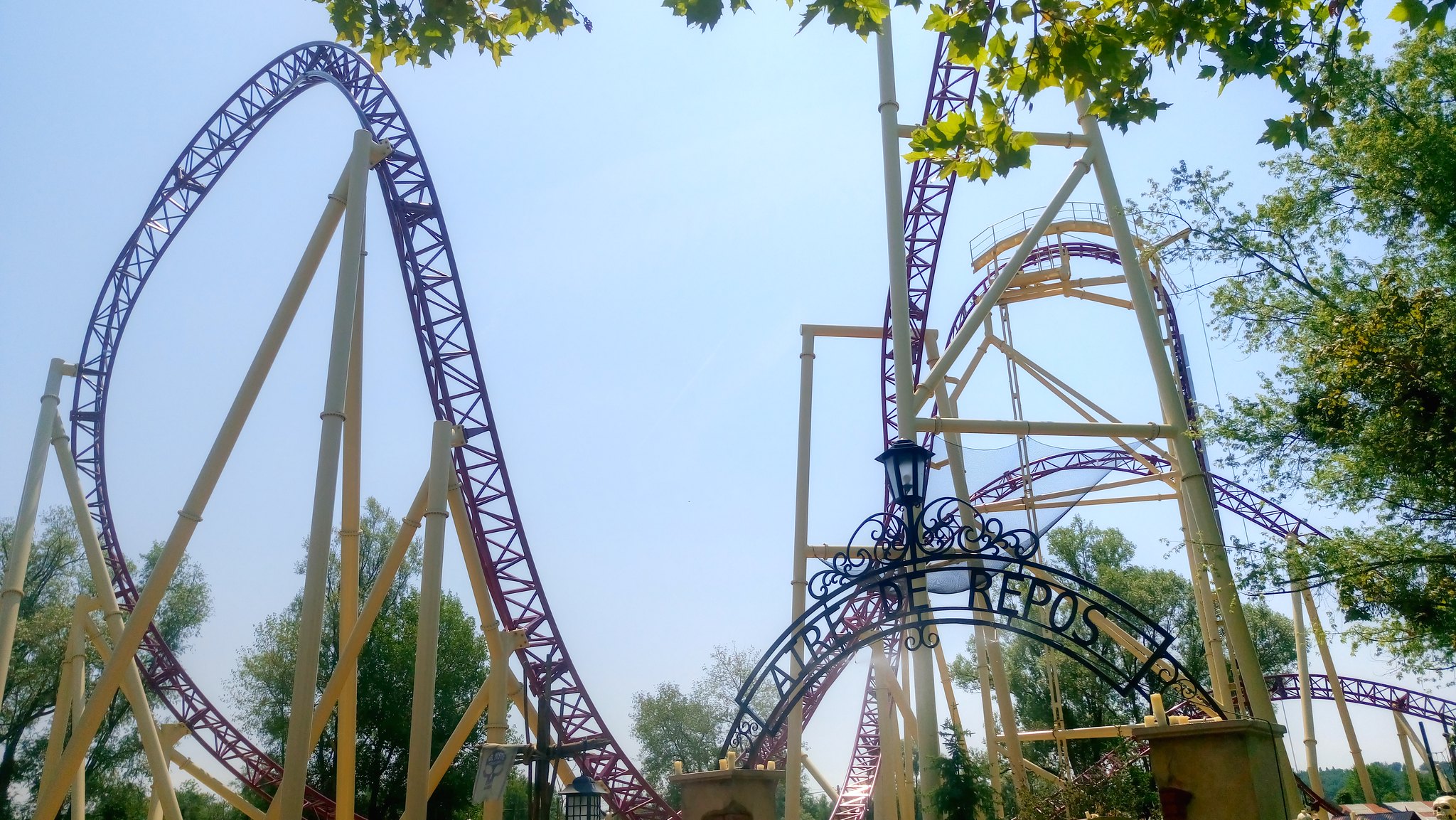 Mystic is a very pretty ride to be around. 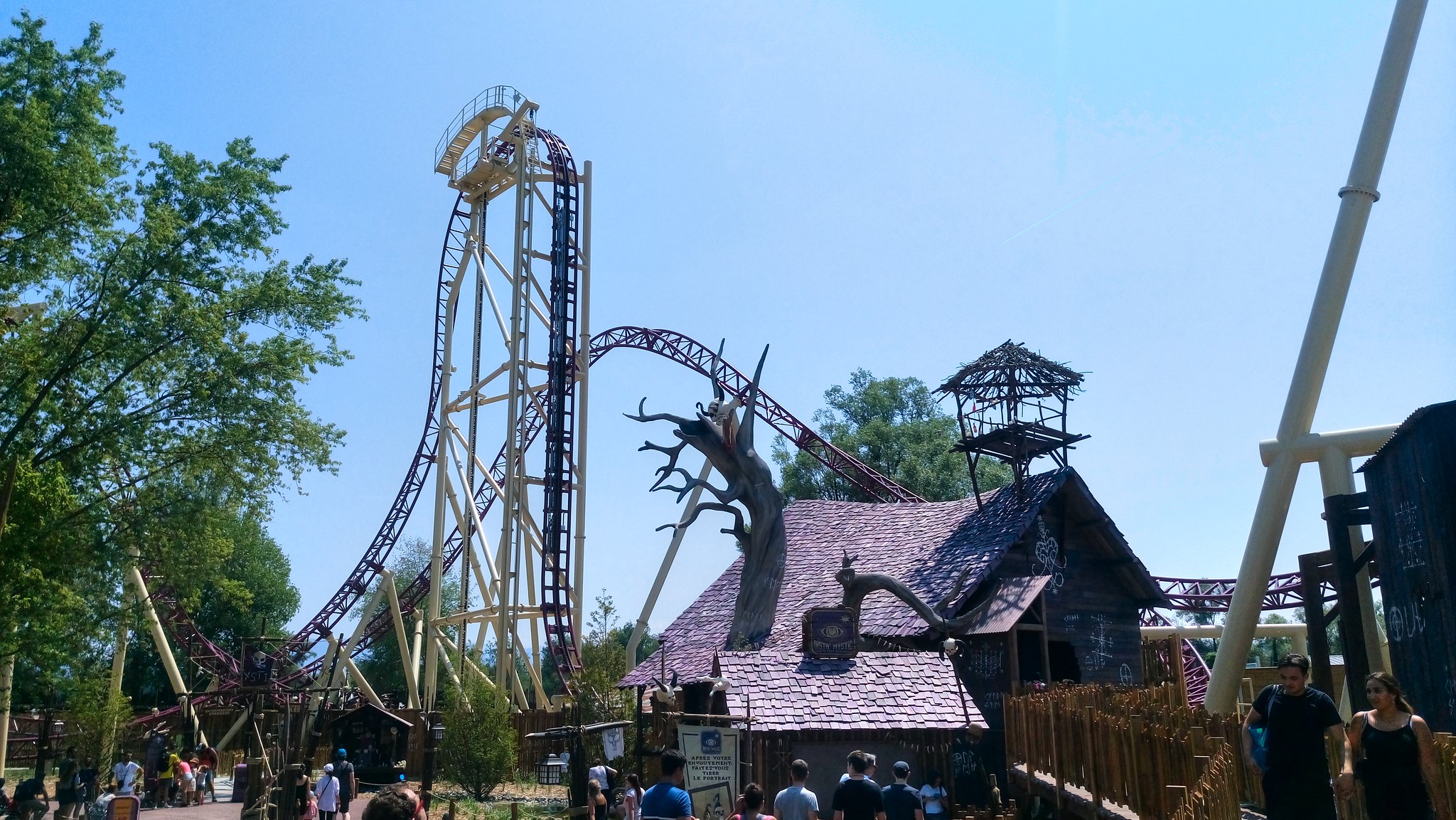 I like the little cemetery entrance to the area (with mist) and the station looks amazing. 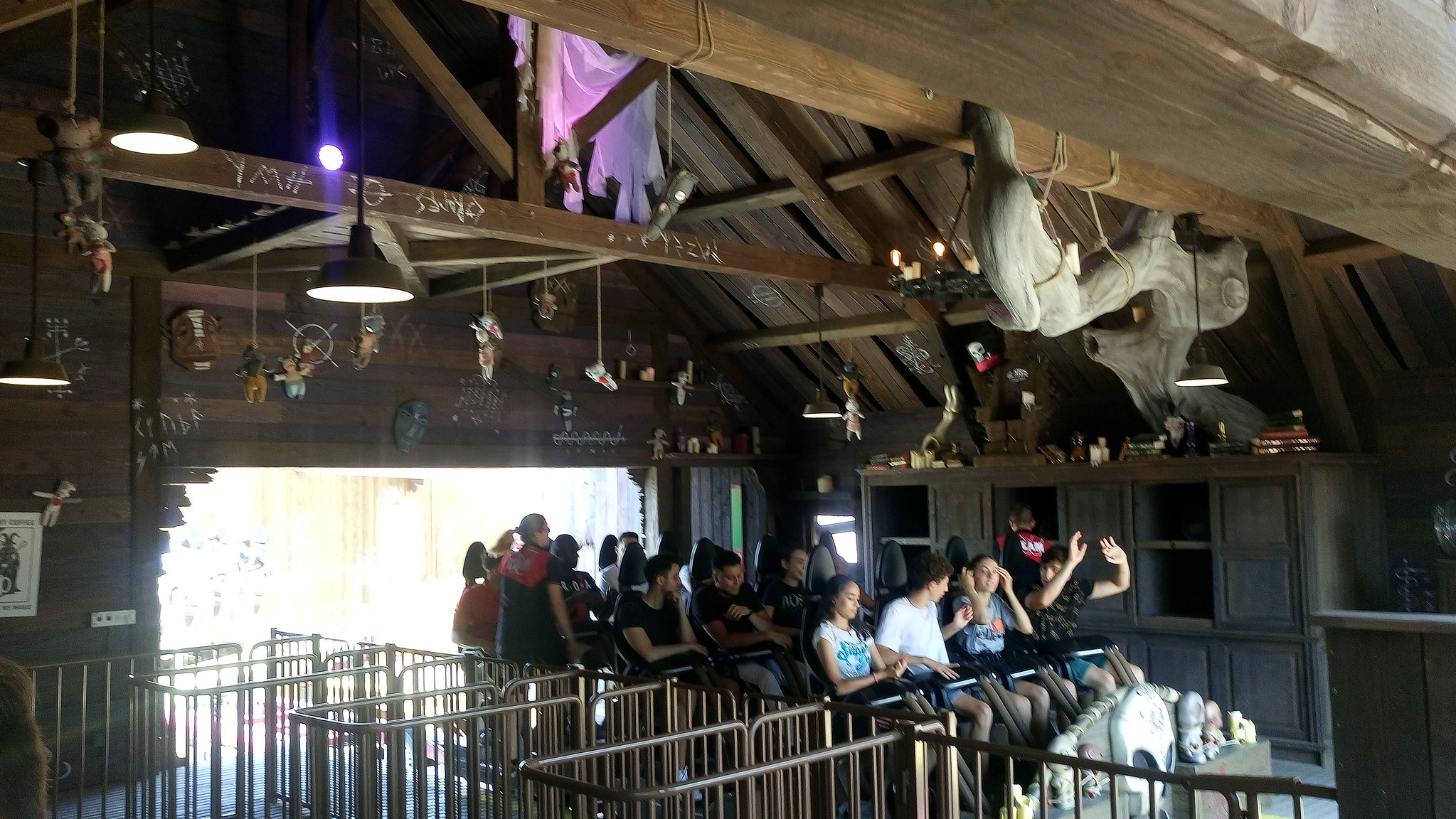 Inside is cool as well. The return of the themed bookcase baggage holders. Front of the trains with their voodoo dolls are also a joy to behold.

First impressions in the front were really good. The twisted, almost-vertical drop kicks ass and you're thrown into a weirdly shaped top hat reminiscent of Lost Gravity. 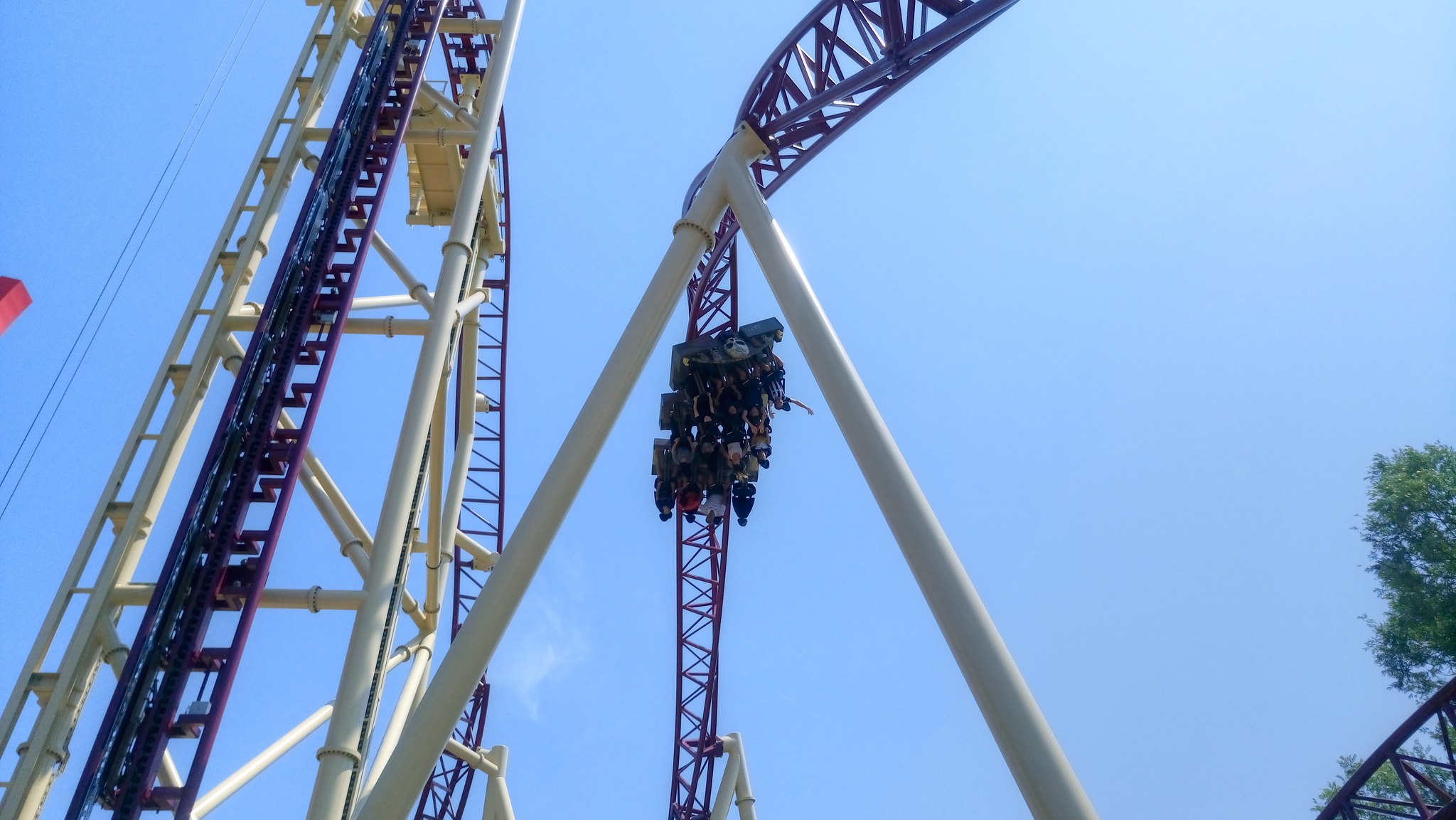 Only some zero-Gs are beautiful. This is one of them. 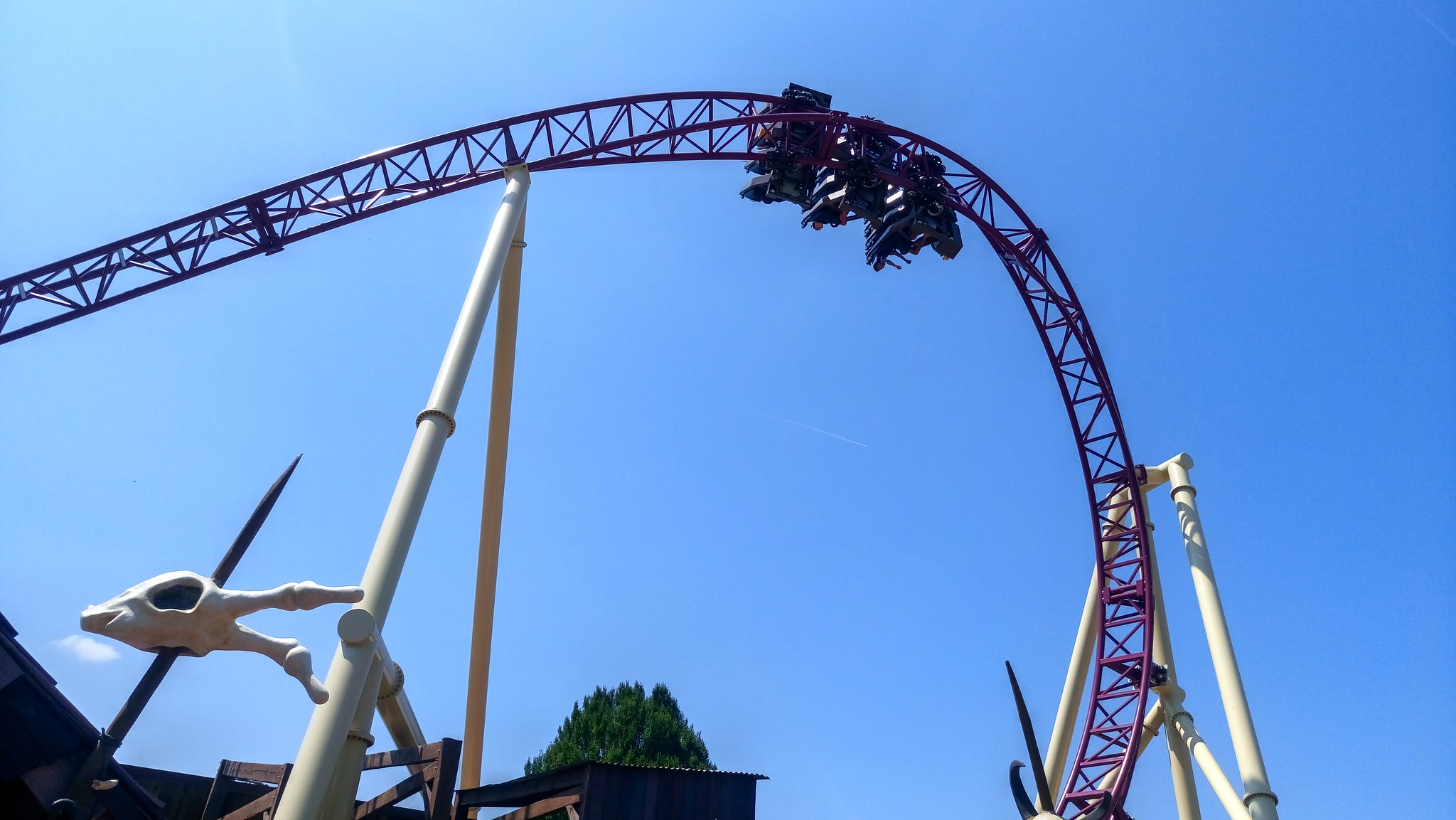 Then you dive loop past the turntable and station into a weird airtimey banked corner (which is even better backwards). 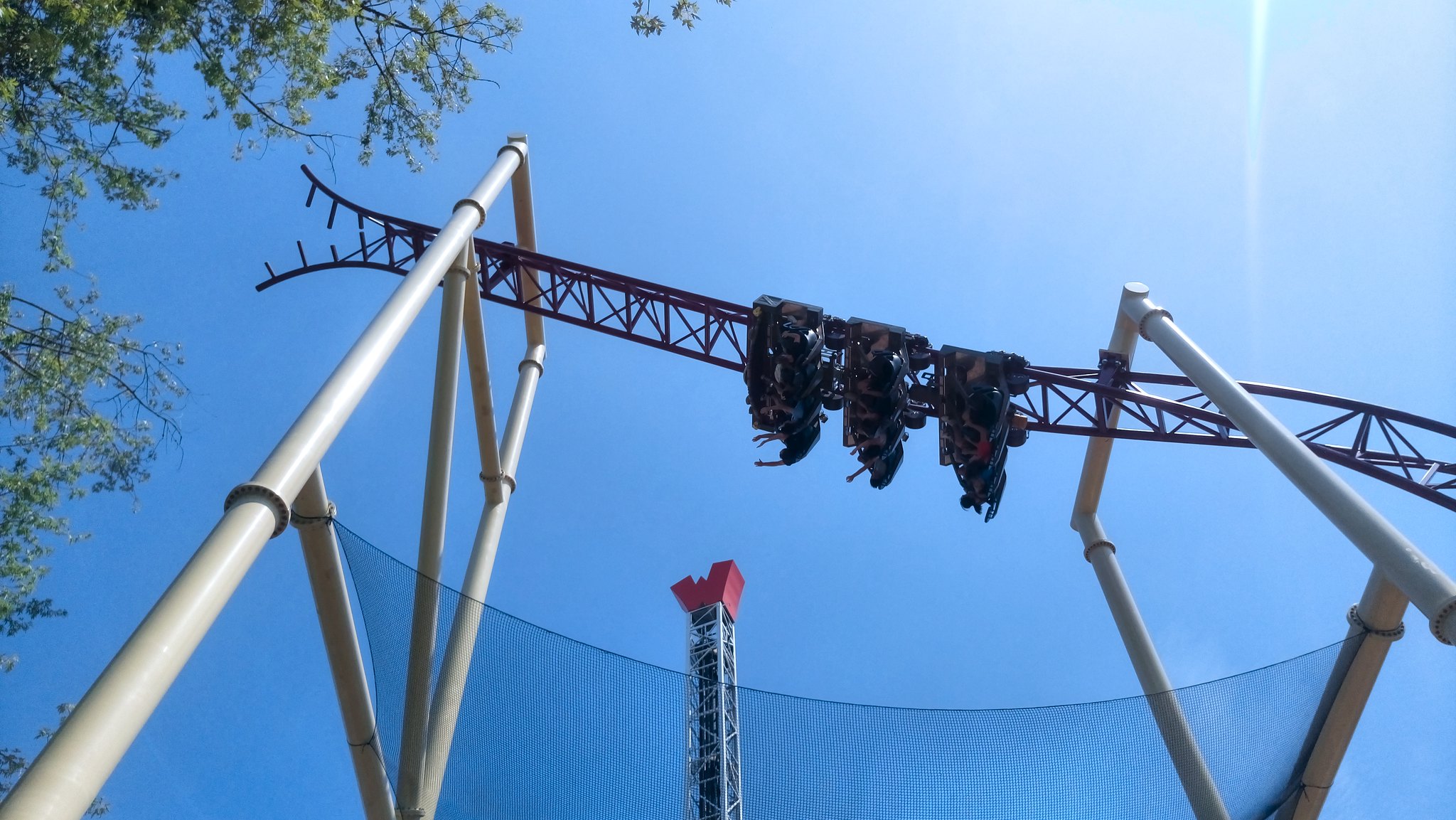 And up into this ridiculous thing. Perfectly on my limit of upsidedowness to be in hysterics and clapping rather than holding my head and shouting. Love it. 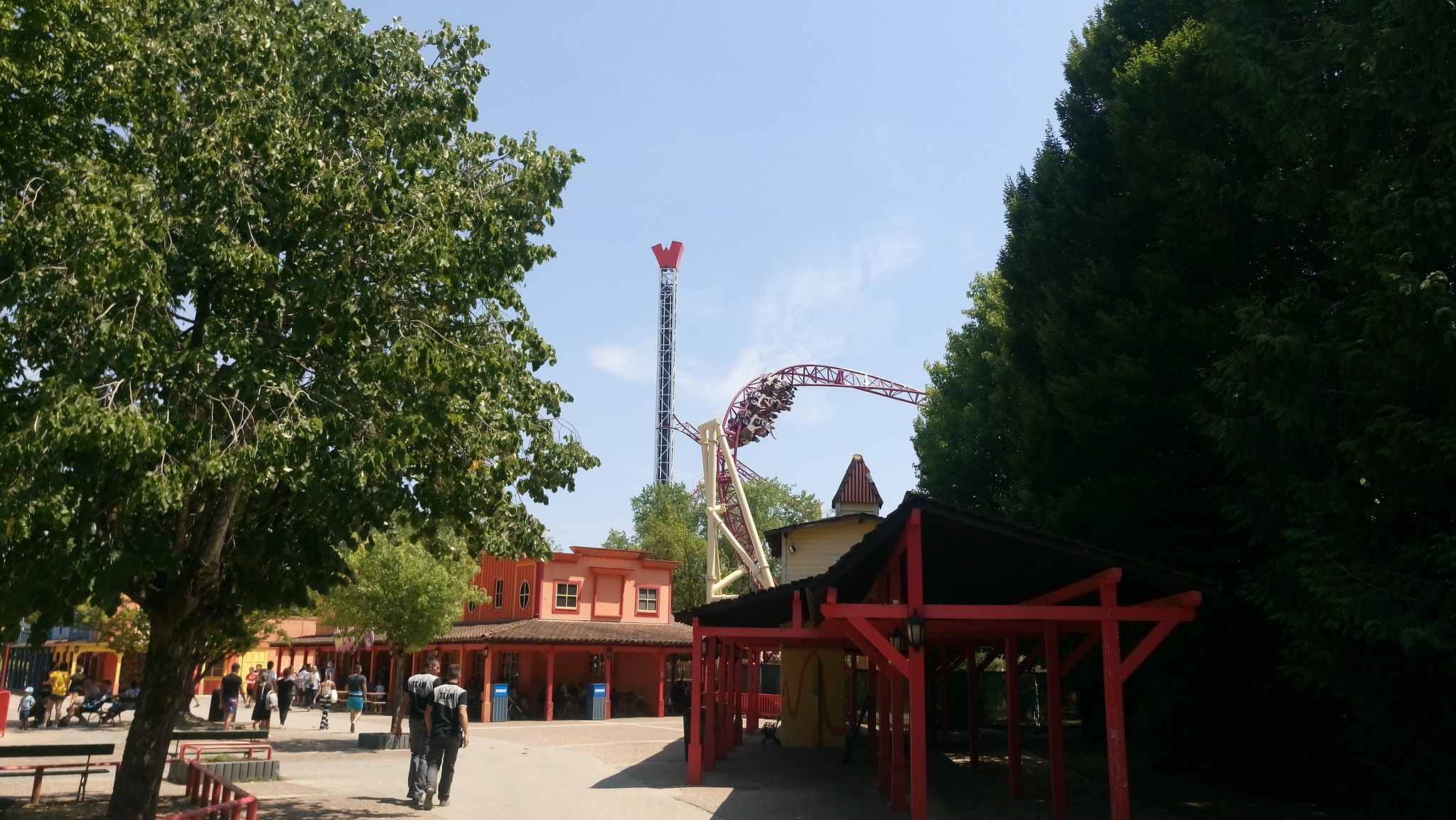 Backwards from there is really cool but a little too short and ends on my only real gripe with the ride in that it brakes a little too harshly on the turntable. Seems like it would have been easy for it to shuttle back into the dive loop a bit more for that last little kick, but it falls short of that and you're done.

Proper good stuff though. Gerst are definitely on the up with these things.

The park was beginning to fill a bit and we only (if we were being sensible) had half a day to avoid another chunnel mishap so it was time to mop up the creds. 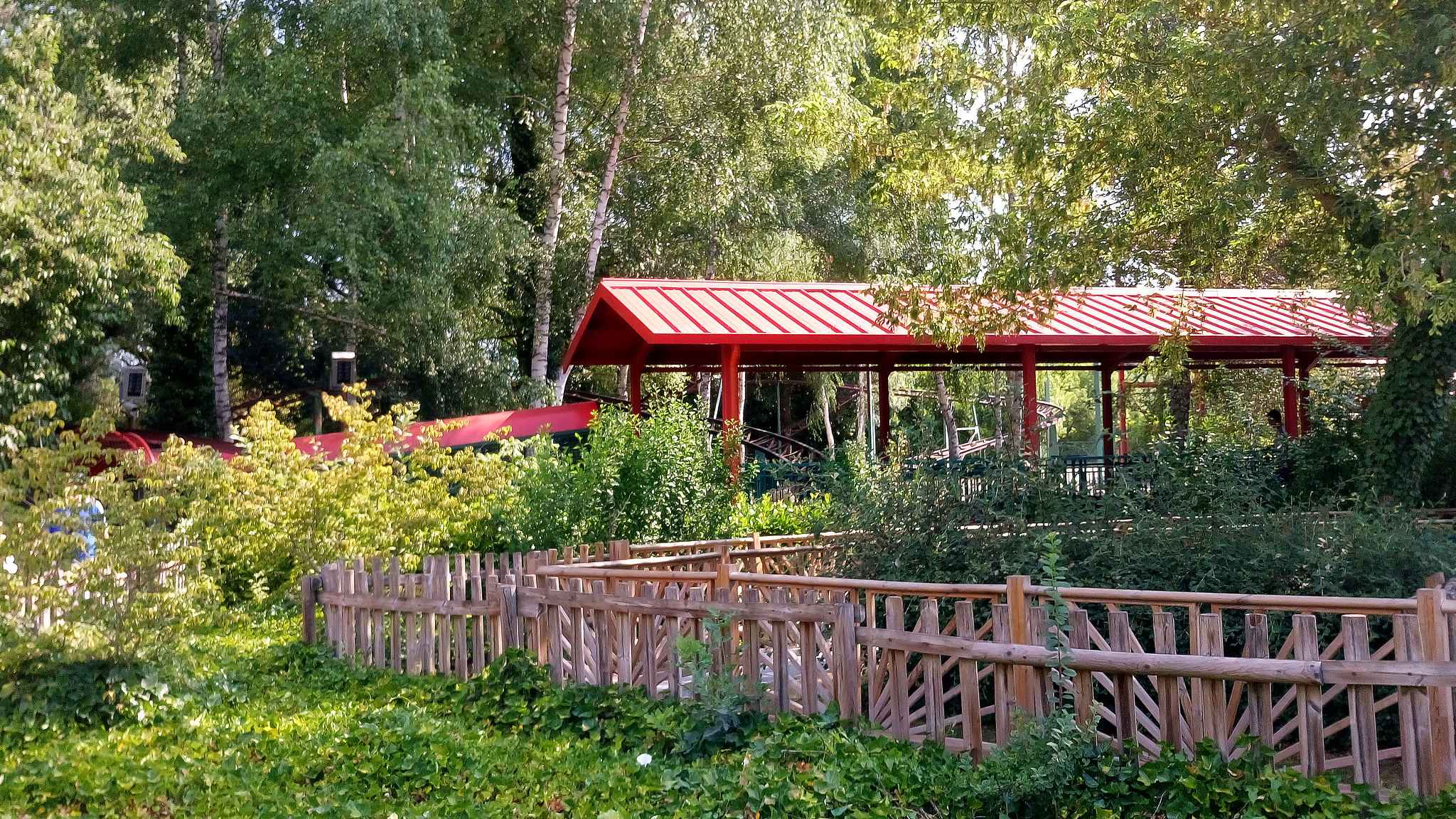 Coccinelle lives on here after Belgium spited it. Such a good name for the English to say.

Bypassed the Boomerang queue as it looked deeply unpleasant. 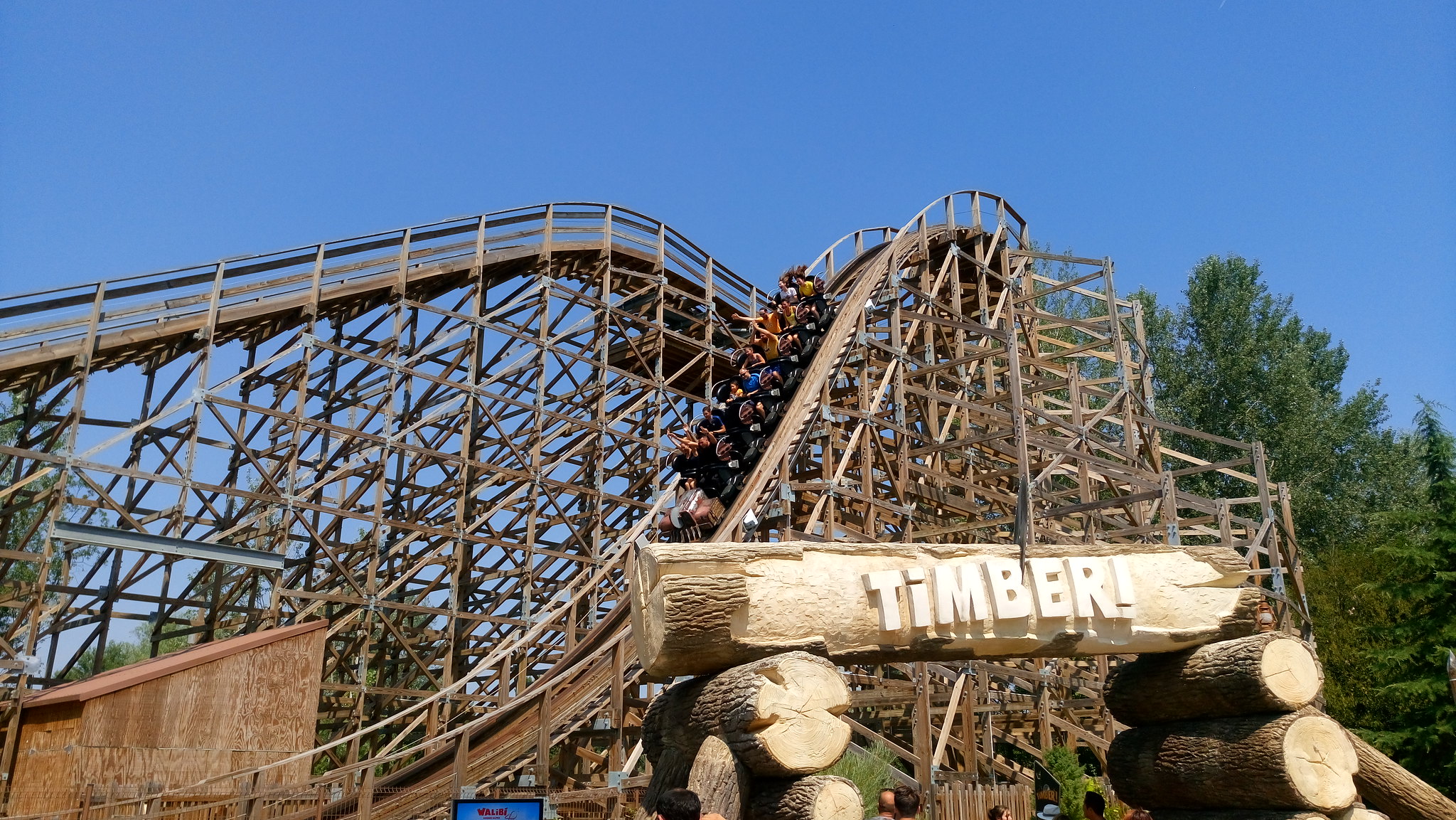 Straight to the other main event then. First thing I notice is that the audio shouts TIIIIIIIMBERRRRR! as the train takes the drop. Nice. 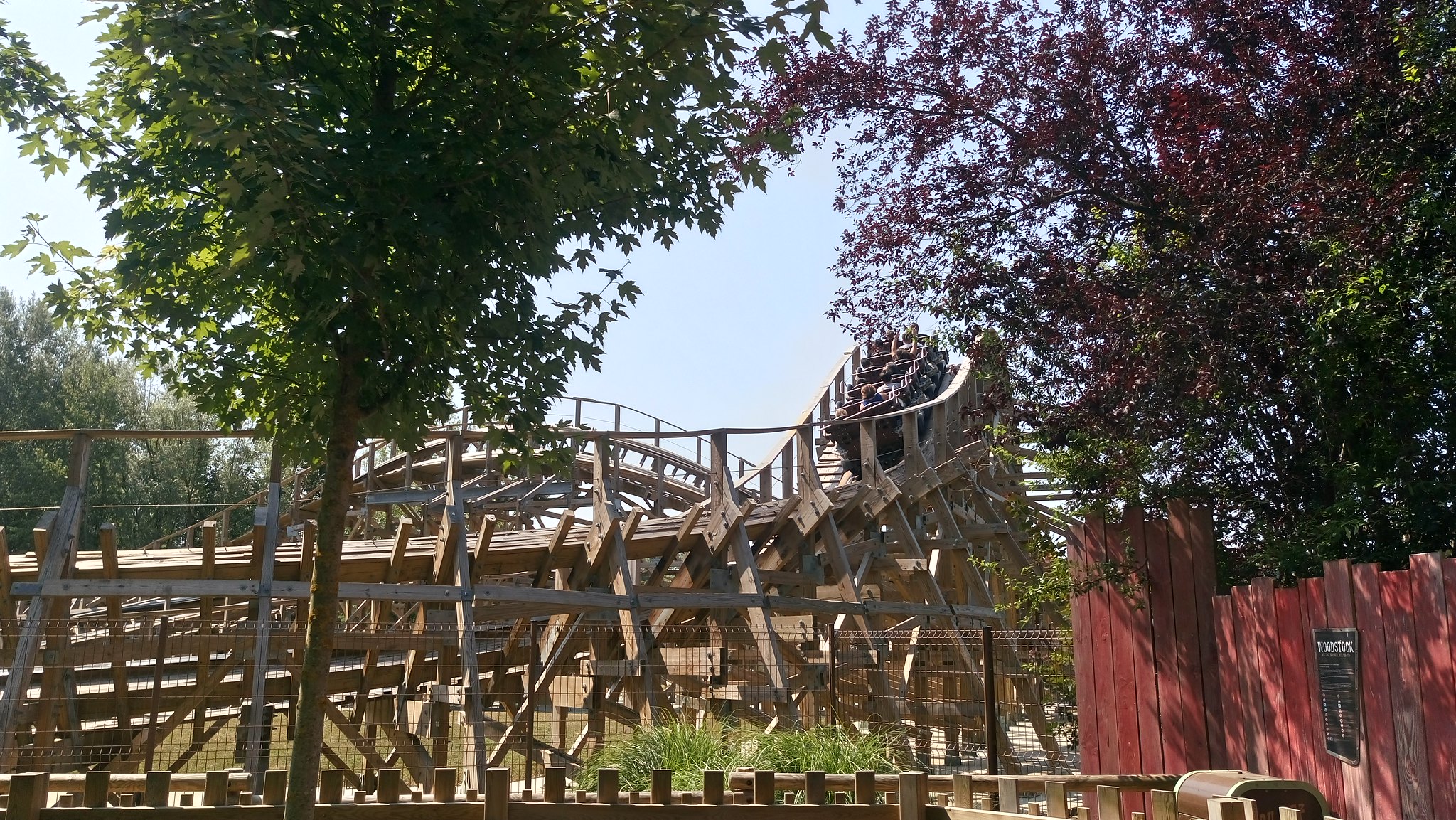 Baby Gravitys always pack a punch and this one is no exception. Every one of its hills was proper chucking me out of the seat in joyous fashion and it was nice to see the variety of some little twisty banked ones in such a tiny layout. 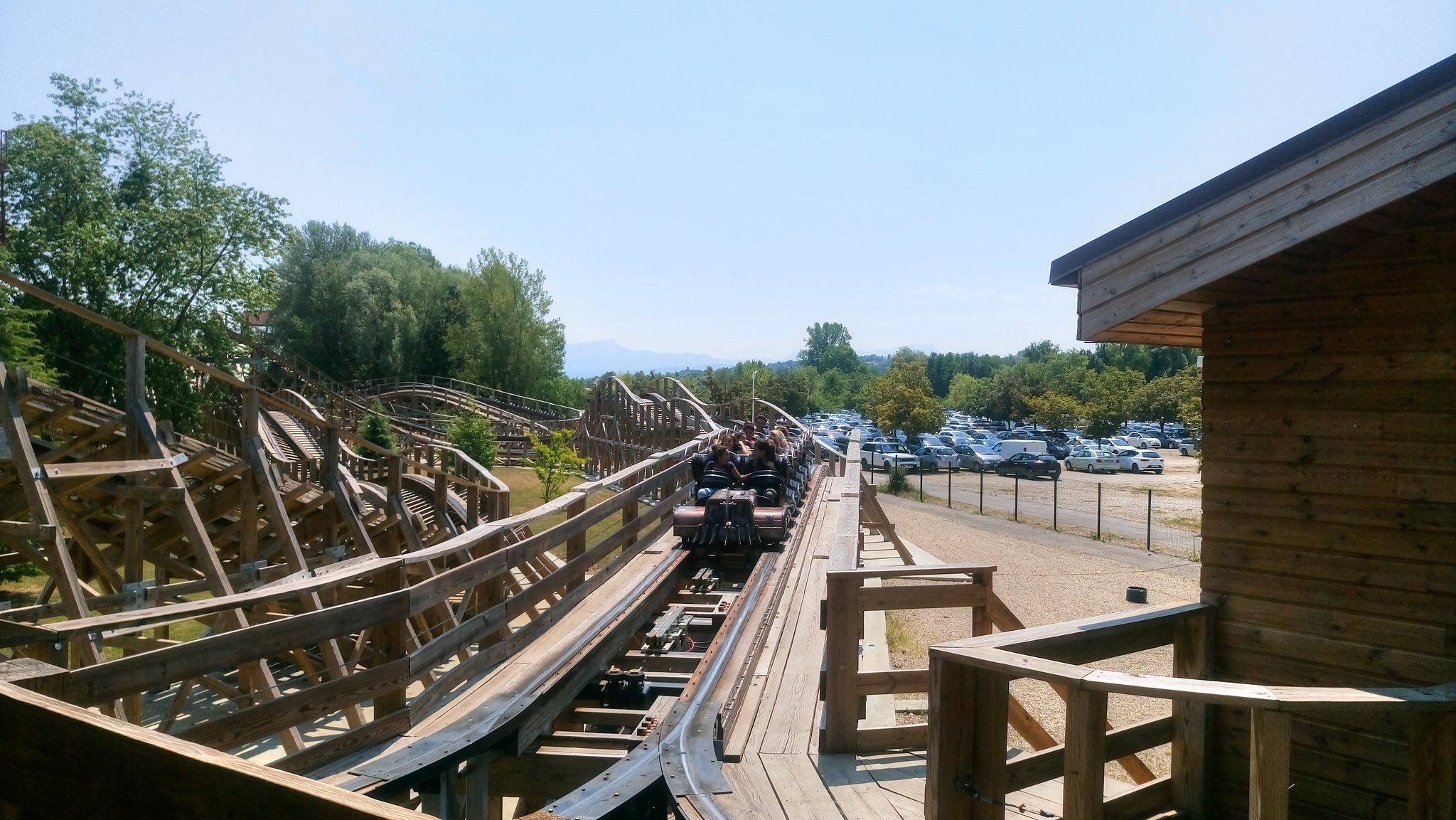 Problem is that it feels short. Really short. It enters the return run section and you start to really get into it thinking oh yes, here we go. Then it trims in a double down and ends abruptly. Hilariously abruptly. We just burst out laughing at the unexpectedness. 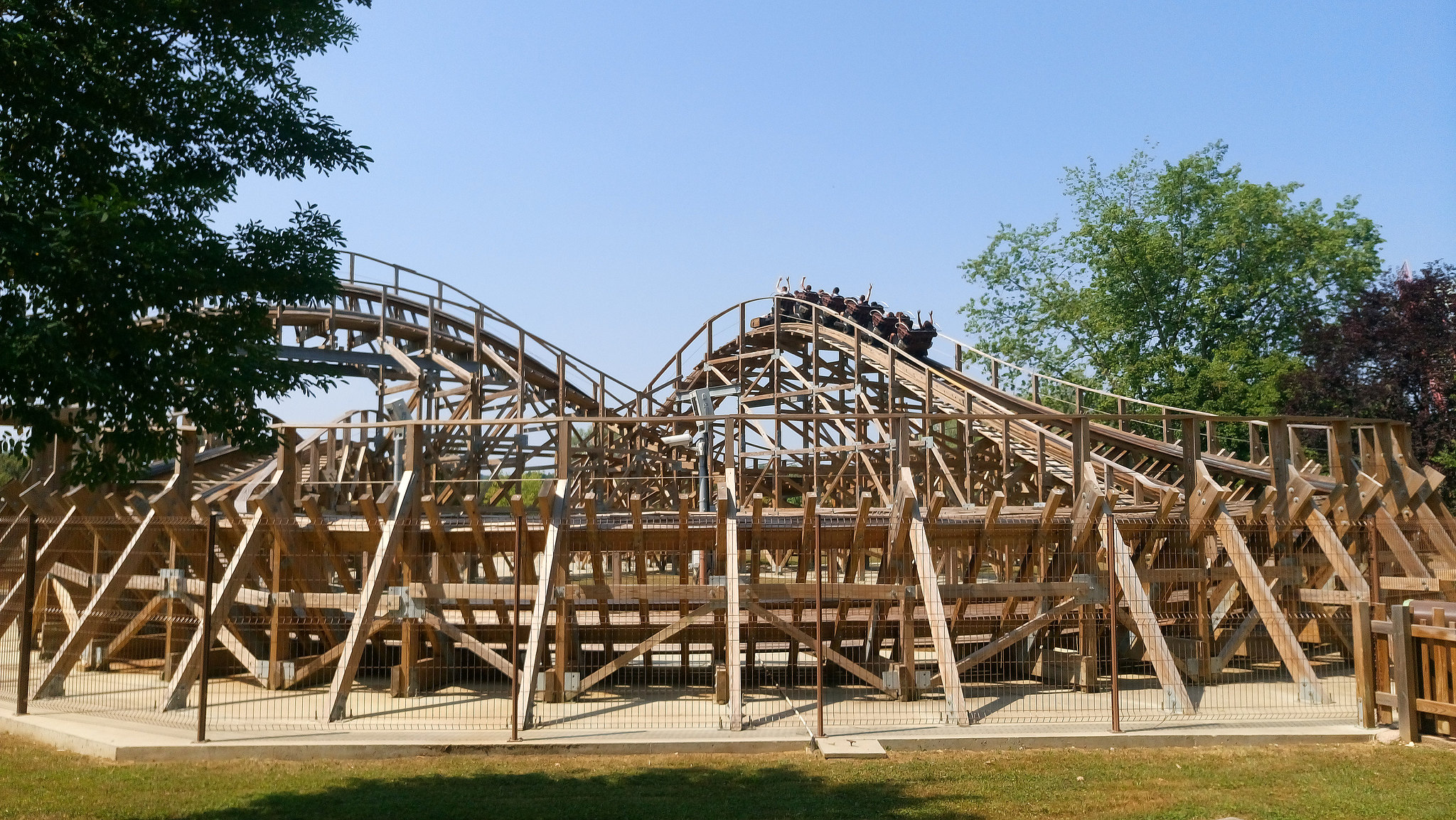 For me, Twister and Wood Express both had that feeling of the ride going on really long for how tiny the drop is, and you admire them for it. Somehow they didn't manage that here. But what it does do is amazing and potentially the strongest of the three.

Woodstock Express was a sufferance being the longest queue of the day. Turns out I've never done one of these Zamperla versions of the standard wild mouse before so that was the slightest of upsides. 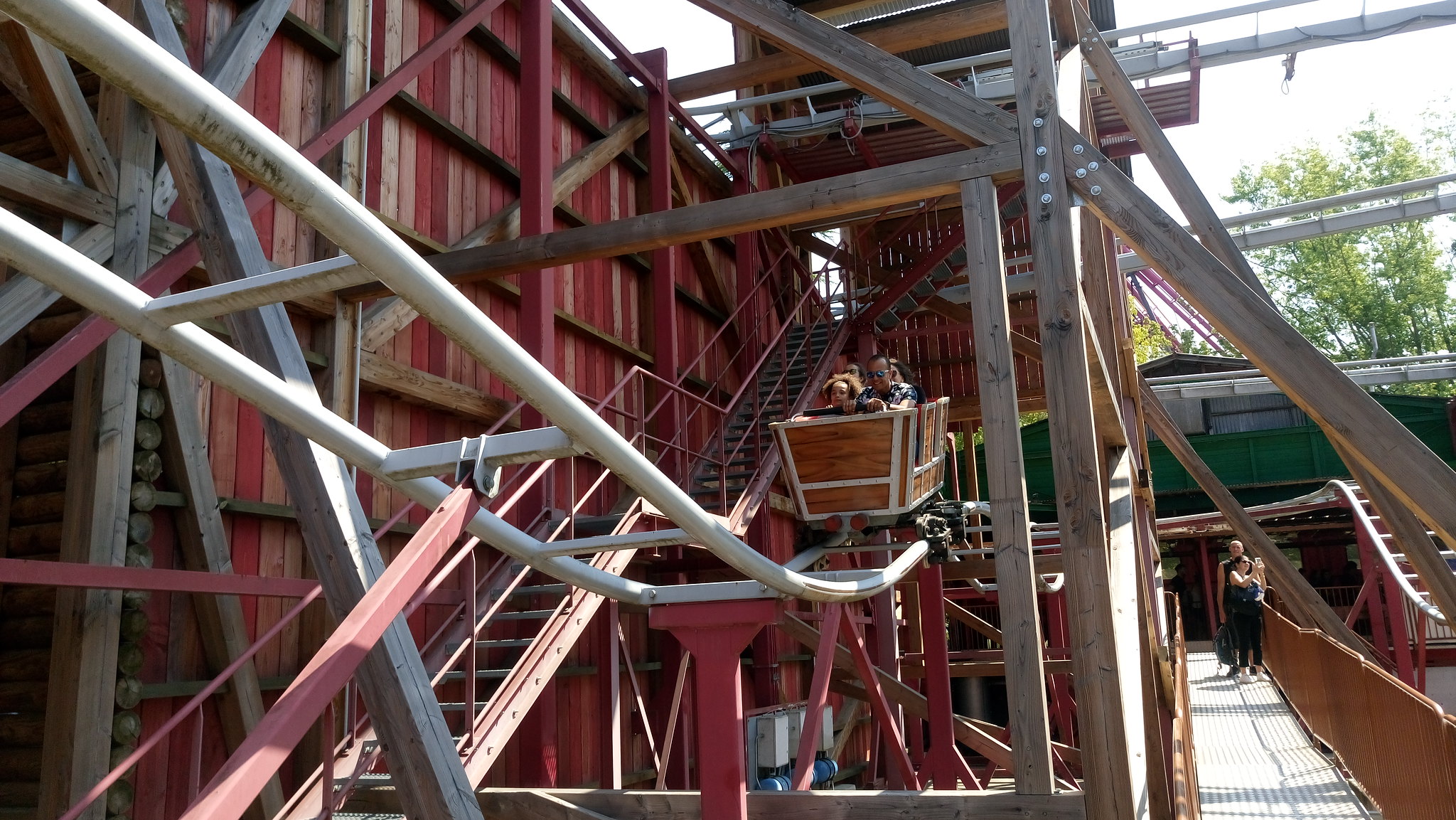 It's just a poorly built copy really. The shaping is off in a lot of places and what happened to the big airtime at the end here?

The Boomerang queue was now slightly less unpleasant but still very slow and sunburny. They've got the weird metal lap bars on this one, but apparently it isn't done by the same people as Prater (the one I kinda like).
Instead these are virtually impossible to climb into. I spent the first 15 seconds trying to manouevre my foot in between/over/round the bars while my friend was about to be trapped in the airgate. Makes Colossus look easy. 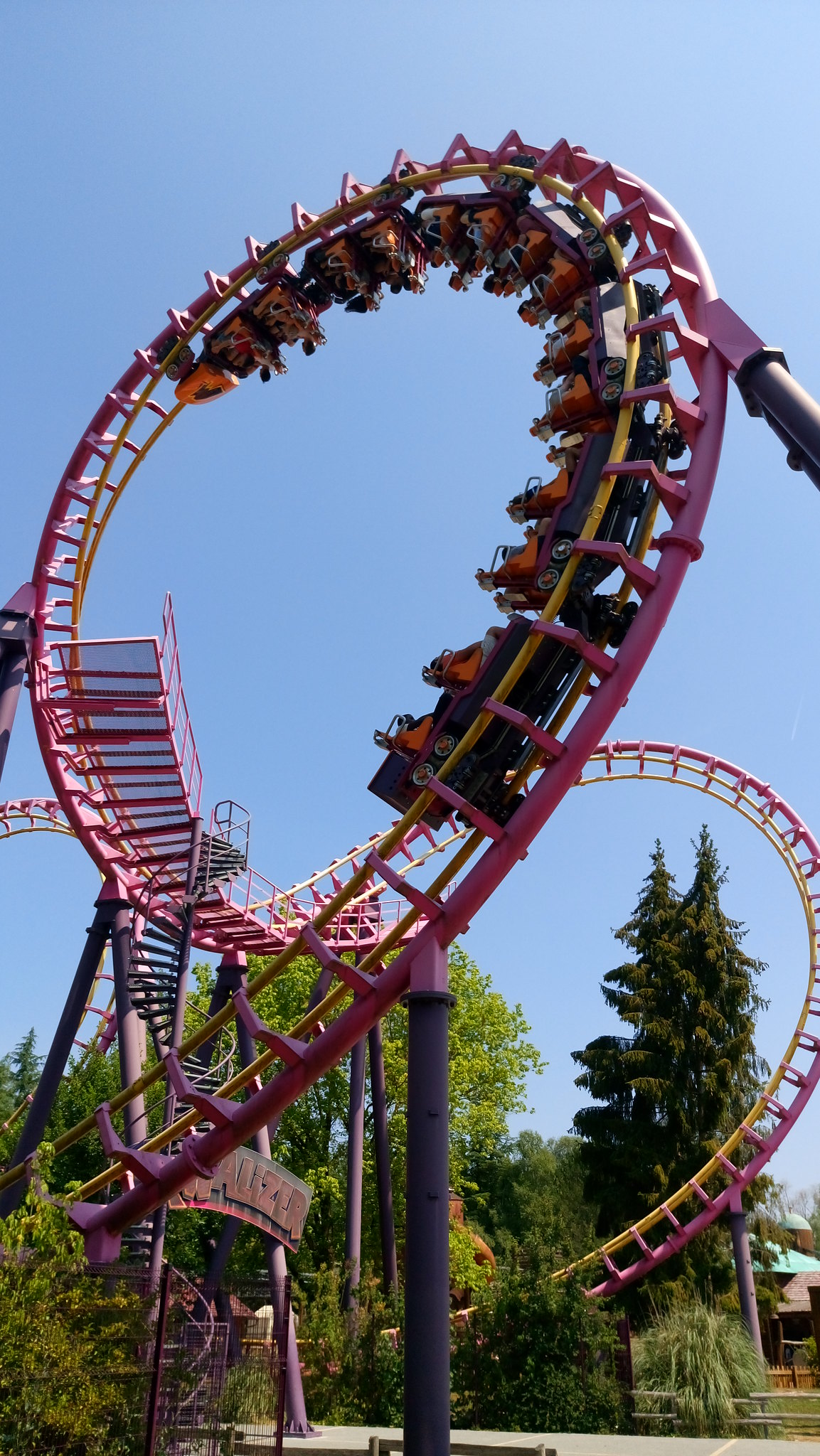 Somehow contorted into the thing and away we went. It takes more tactical bracing this way - tightly gripping the handles in front to stop yourself falling stomach first into metal and to stop the handles themselves destroying your legs. If you can put up with all that it's a slightly better Boomerang experience, but it still sucks. It was meant to be ravey like Speed of Sound as well, but it wasnt.

With not long left we thought we had to be a bit tactical with rerides, starting with another go on Timber in the back which was even better. Luckily the queue boards were wildly overestimating and both major attractions had actually quietened since earlier. Either people finish this place very quickly or it had just got too hot and they had given up/gone to the water park.

So we ended on with several almost walk-on goes with Mystic, which also felt even better in the back. Then I got stung in the lip by something at 50Mph on the last lap. Worth it.

Sadly it was then time to leave this great little park, which seems really up and coming with their lineup now containing a very solid one-two punch. Could have stayed on them all day, but unfortunately it's just too remote. Walibi seem to know what they're doing these days.

A grim 7 hour drive followed and then for the first time we actually got put onto an earlier chunnel instead of getting stuck in Burger King for 4 hours. Amazing.
I might just slither again before the year is out.