It's story time! And a particularly embarrassing one (for me)...

I have for a very long time, avoided going to any haunted house, scare park, or HAUNT.

I had been asked by my friend a few weeks before 10/30 if I wanted to go to Halloween Haunt with him and four other people.

I should've said no.

But instead, I decided to go because I was tired of being scared.

Well, I met my friends at the drop off zone at around 3 in the afternoon and we walked in. The scary stuff didn't start til' 6:00, so we rode The Beast and Firehawk.

We went to the stage in front of the Eiffel Tower in time to watch the frightened clown ring the bell and fire off some very loud bangs (I don't know the actual term for them).

Which I stepped out of.

I just wasn't ready for the big scares yet. I wanted to stick to the small scare zones and get a feel for the scares there.

Which I also sat out on to eat my dinner (which came without a drink because apparently if you buy a $5 pretzel with a $20 bill, it leaves you with $14).

Just so I could get at least one ride in, I got in line for Mystic Timbers with one of the other friends I came with. He scared me in line, in which I slammed my hand on a wooden post and gave myself a splinter.

We got out of line because we realized that the line was a lot longer than we originally thought. It was 8:00 when we got out.

So this is where the embarrassing part begins.

I said that I wanted to go through a small scare zone, the closest of which was the one in Planet Snoopy.

I was thinking "This will be fun. Not scary."

That is, until I walked by "Jack" and got the living crap scared out of me, which made me run back to a fence.

My friends had been pressuring me to do all the things they were and they knew I would say no. So they pressured me to walk through, which I then said "No. I don't want to keep being pressured to do things I don't want to do, and if you keep doing so, I'll just leave early."

My plan was to walk through Coney Mall, past the Dodgems, past the Tower, and to the gate.

Well, that didn't work because a guy scared me after I told one guy not to, which made me have a mad dash to the Reds Grill where I freaked out.

In the end, a security gaurd helped me buy a No Boo necklace because I only had $1 left.

Some photos and videos I took: 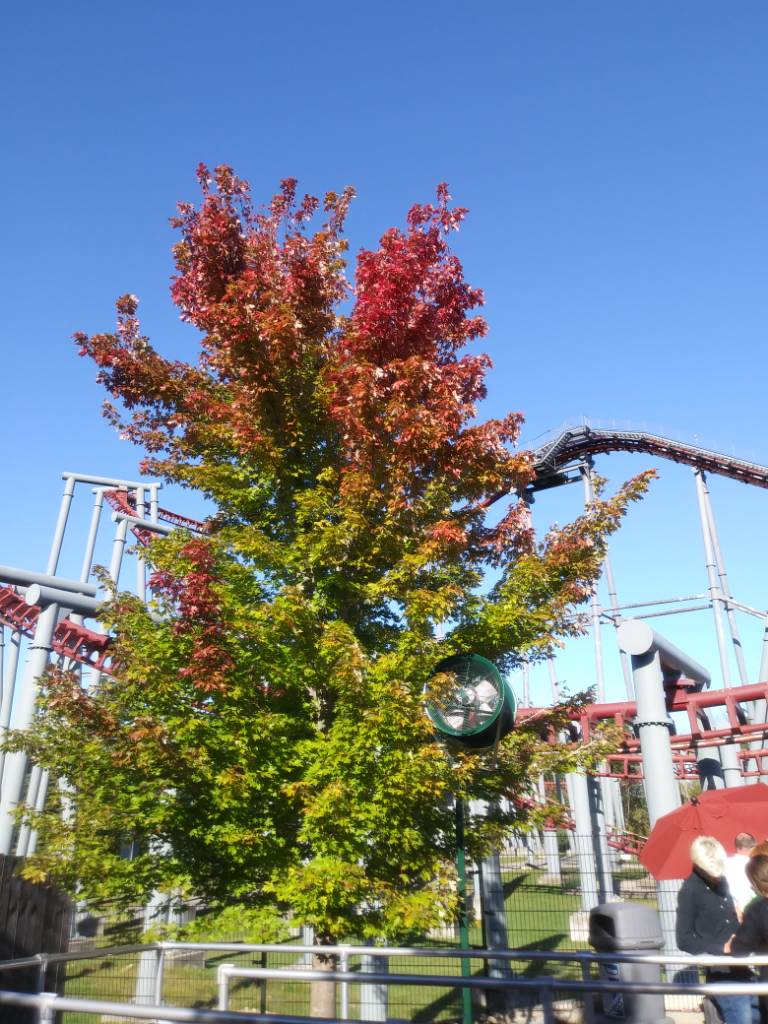 Social Media Team
You need to man up.

This is the funniest ****ing thing I've read on CF.

For some people, I think scare attractions are in acquired taste - I blame being taken on Alton's haunted house aged 4 for the fact that I avoided that sort of thing like the plague for a long time.
I was 21 before I was (literally) dragged through a horror maze at Thorpe and would have been first in line for a 'no boo' necklace (if we had such things) - yet somewhere between then and now, I've become a big fan. I don't really know what to recommend, other than go through with the right people (I first did TotT in 2011 with my two best CF friends), pack a sense of humour and remember that the only things that can hurt are other guests or accidentally meeting a scare actor who knows you from the enthusiast community.
After that, Halloween will fast become your favourite part of the theme park season; but you'll just have to trust me on that one.

Last year, Eden Musse, I kept my eyes closed most of the time, and this one person was right in front of me, and we stopped. I was like, "Why did we stop?" Then I opened my eyes, and this girl says "I'm Why!" It was pretty scary, but I still liked it.

Zek_Teh_Kek said:
Last year, Eden Musse, I kept my eyes closed most of the time, and this one person was right in front of me, and we stopped. I was like, "Why did we stop?" Then I opened my eyes, and this girl says "I'm Why!" It was pretty scary, but I still liked it.
Click to expand...