Movie Park Germany are possibly giving the popular Mystery River (Never ending story) rapids some sort of refurbishment for 2018.
In this interview from the end of September the park manager said they hope to make some improvements to Mystery River however at the time they had not decided on how extensive this work would be.
http://instagr.am/p/BbjzArYBPbh/ The park has now closed for the off season, and they have shared a picture of the boats lined up outside the Nickelodeon Shop (which is oddly on the complete opposite side of Nickelodeon land from the ride) but there is still no official word if any work is being carried out.

The park's (terrifying) Ice Age dark ride which closed at the end of the 2016 season due to the license expiring remains SBNO.
Other than 3 animatronics being removed for reuse else where in the park (2 featured in the Circus of Freaks Halloween maze and 1 is now in the entrance lobby of their 4D cinema which still has an Ice Age show), the ride has been left untouched.
MoviePark-Infos.de have said while nothing is official yet plans do exist for the ride, and it will not be demolished - therefore we can assume it will merely be rethemed in the future possibly for 2019 but more likely 2020.

The park manager wants within the next 5 years to build some form of accommodation onsite. He believes it is necessary to achieve their goal of becoming the third most popular park in Germany (after Europa and Phantasialand).
https://nl.letsgodigital.org/pretparken-attractieparken/movie-park-germany-attracties/
Last edited: Mar 2, 2018

Yeah they're going to have to do a lot of work if they ever want me to go back. This park is the definition of overpriced garbage. Everything is just so run down and mediocre.

Mystery River was Fab! But did look like it was showing its age - That its getting some TLC is great news.

Yay for mystery river refurb rather than removal! Hope they can keep the retro charm of it. (Psst bring back the IP, surely it's not worth much now??)

And lol at bandit. I know which section I'd retrack!!

Please please please let them finally build that hotel, it was always so cumbersome to get to 3rd party hotels from the park lol
P

CSLKennyNI said:
The park's (terrifying) Ice Age dark ride which closed at the end of the 2016 season due to the license expiring remains SBNO.
Click to expand...

Ahhhhh, I never heard of this being a thing and was confused when I couldn't see it on the map this year. Glad I got to see it when I did then.


Glad to see the rapids getting some love, intrigued as to what they're going to do with it.

I hope that they just tart up Mystery River rather than a complete retheme / overhaul. It's fab the way it is really, just needs a bit more love going it's way really.

There is worrying rumour going around that 2018 will the last season for Movie Park's fab Bermuda Triangle water dark ride... 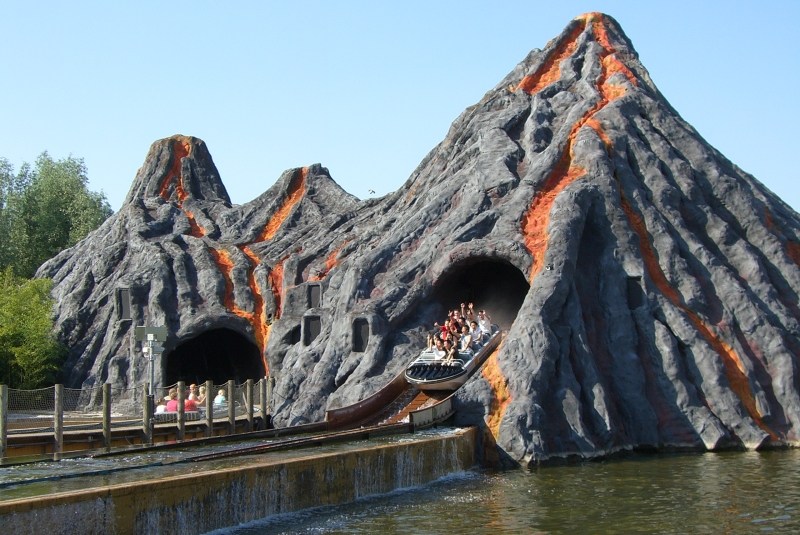 Noooooooo, they can't do that. It's just so 'wtf fab' and really left a mark. And even though it's dated as anything, it's still one of the best things at the park..

It's kookie (and quite frankly, terrifying) but very dated. I can see why they want it to go. Having said that, doesn't this park have loads of space to build something new (just the general feeling I got when visiting but happy to be corrected)? Also, if they're going to replace it with something as equally **** as the immersive tunnel, then it should definitely stay.

What could they replace it with? I reckon that a Mack XTREME Spinning Coaster could be a good fit, as the site is quite compact, I believe. Unless you guys would class a Mack XTREME Spinning Coaster as too similar to Star Trek. In that case, the only other coaster types that I reckon could fit in this site (that Parques Reunidos has installed before) are a non-launched Gerstlauer Infinity, as Slagharen built Gold Rush in 2017, or a family GG similar to Roar-O-Saurus at Story Land, which Parques Reunidos built in 2014. Or they could go with a new water ride, which would probably be a better fit. Or they could go with a new coaster type entirely for Parques Reunidos.

^If it does go it more than likely a case of the system is knackered and they don't have to money to fix it, rather than the park having a replacement ride already in mind.
I certainly can't see a major coaster anytime soon it is Parques Reunidos after all.
MPG's management had been trying for years to get a new big coaster before finally they got Star Trek. Unless PR have suddenly had a dramatic change of heart there probably won't be a major investment for a while.

Would be a shame to lose Bermuda. Especially since the park is already down one dark ride with the Ice Age ride still being SNBO.

Noooooo. I loved Bermuda. Especially the indoor drop that felt like it wasn't going to end.

Movie Park Germany has shared this survey on Facebook. http://web.movieparkgermany.de/cn/afzhy/umfrage-2018-01

It features some generic questions (favourite and least favourite ride etc.) but also some very specific and interesting ones regarding the park's future:
The theming options given are: California, French Riviera Tropical/Polynesian, Backlot Bay (US film studio theming - sounds bizzare for a water park but I kinda really want to see that) or Asian.
It has been common knowledge for a while that the park wants some onsite accommodation however we hearing about a possible water park and those IPs for the first time. Interesting that those IPs have been specifically highlighted as possibilities. Also given that Star Trek is listed again, even though they already have STOE, it seems they are open to expanding that theme with another ride.

There is also a question asking what sort of attractions would you like in the theme park. The rather generic options given are: new water ride (with a picture of Mirabilandia's water coaster), Simulator, looping coaster, launch coaster, family coaster, spinning coaster, drop tower, interactive dark ride, family entertainment center.

Whether this survey actually means anything, or if any of this actually materialises of course remains to be seen, but it is interesting to hear about the sort of things they are considering. Hopefully this is a sign that Star Trek was only the start of Parques showing an interest in MPG and heavily investing in it for a change.

Also if you fill in the survey (it is however all in German) you get a code which will give you an entry ticket to the park for a day during the 2018 season for only 20 euro.
Last edited: Jan 20, 2018

Theming options sound pretty cool, but why hasn't anyone ever done an apocalyptic Christmas theme? Although with all the hazardous waste from an apocalypse, that might not be the best idea for a waterpark. Too bad they can't do a new land with that theme.

https://twitter.com/i/web/status/955822128619773952
IMA Score have tweeted that they are bringing a legend to life with Movie Park Germany. And on the screen is a picture/concept art of one the scenes in Mystery River.
So it seems Mystery River is definitely getting a refurbishment for 2018 which will include a new soundtrack!
Last edited: Jan 23, 2018

I've done the survey, it translated easily enough.
Seems like their main interest is becoming yet another 'resort' with hotels and waterparks. This doesn't interest me and there's certainly not enough at that park to justify spending more than a day there when there's two infinitely superior parks just up the road.

Ahh FFS. 2018 is just the worst.
They install that insulting excuse for an immersive tunnel and then want to mess with the best thing in the park. Just no.

Movie Park are also opening up a visitor welcome centre in the entrance square. It will be home to guest services, etc. The shop for buying upcharge attraction tickets will also move in from the its current unit in the main street.
In Nick Land Mission to Mars, Ghostchasers and the Dora flume are all receiving repaints as well.

With regard to Mystery River, interestingly when MPG themselves posted that picture they said they are working with IMAscore and IMAmedia. IMAmedia made the preshow films for Star Trek, trailers for MPG's scare mazes and the behind the scenes video of the making of the Star Trek soundtrack. Wonder what their involvement with Mystery River will be?

All we know is that there will be a major renovation of the ride. Given the picture shows a scene that already exists in the ride, and the fact it is extremely popular (check out the Mystery River Fan Club on Facebook!) I think we can thankfully rule out a retheme (although some fans are hoping for a return to Never Ending Story but I doubt PR will spend money on that IP).
YouTube channel Ride Review was given a look around the closed park last week and they were told by the park that we will find out what is happening to Mystery River within the next few days.
You must log in or register to reply here.
Share:
Facebook Twitter Reddit Pinterest Tumblr WhatsApp Email Share Link
Menu
Log in
Register
Top