Most ridden coasters & most visited parks?

DelPiero said:
Alton - Nemesis - Over 200 times - Done 15 in one day when the SR line was at the exit.
Nothing else comes close.
Click to expand...

Did the same thing when I went. Do they still have that SRQ? That was great. Was able to bypass 20-30 min queues middle of the day. Was one of my first marathon sessions on a coaster, and managed 11 rides throughout the day.

Hutch said:
Did the same thing when I went. Do they still have that SRQ? That was great. Was able to bypass 20-30 min queues middle of the day. Was one of my first marathon sessions on a coaster, and managed 11 rides throughout the day.
Click to expand...

They removed Nemesis’ SRQ in around 2015, I think. The only SRQ left on park is Smiler, and Wicker Man wasn’t even built with one. I think they’re something Merlin are generally phasing out.
H

Oof, a tough one to remember as I've not actually written any of this down. I'm going on gut feeling alone.

I've probably visited Efteling or Disneyland Paris the most times.

I've done 7 trips to Efteling, most of which were for at least 2 days. I estimate 19 visits.

I've done 8 trips to Disneyland Paris, but as most were as a kid I do not know how many days were actually spend at the park.

Staff member
Administrator
Moderator
Social Media Team
Partly I don't really know where to post this, and also partly because this thread started the long thought process in my head, so figure this is as good a place as any to post this.

I've been keeping a world map of all my visited parks for several years. I tend to only bother updating it at the end of the year, so from the end of 2020 it looked like this:

But I started wondering what this map would look like animated over time. It wasn't a hugely stressful week at work for once, so I decided I'd try to learn some Python and get it done. After several iterations, I arrived at something I'm halfway pleased with and willing to share.

The animation plots the location of every coaster one at a time as a red dot (of arbitrary size), and the corresponding blue circle behind represents the total number of coasters ridden at each park (the area of the circle is proportional to the number of coasters ridden at that park). As a bonus, although not all that visible and one I'm still thinking of other ways to show it, each 100th coaster plots as a yellow dot instead of red.

Now that is bloody awesome.

It's also making me want to track precise locations of my creds so I can do something like that in the future...Why oh why didn't I decide to learn Python earlier...

JoshC. said:
It's also making me want to track precise locations of my creds so I can do something like that in the future
Click to expand...

So I'm only really tracking the locations of the parks, but I have the complete sequence of creds (as I've alluded to before I got into the counting at a very early point in my enthusiasm, so this was easy) so I'm only 'dotting' the parks for each cred, if that makes sense?


JoshC. said:
Why oh why didn't I decide to learn Python earlier...

To be fair, I'd never used Python before Tuesday. It's probably a horrendously inelegant code, but it gets the job done.

Matt N said:
Hi guys. Many of us keep tabs of our count of unique coasters ridden and unique parks visited (myself included), but after a post @Hixee made in the top 10 thread showing off his huge spreadsheet logging his total lifetime ride count and his total lifetime park visit count, I was inspired to calculate something similar regarding my own theme park enthusiasm journey. As such, I went through the surprisingly difficult task of trying to work out the coasters I have ridden most and the parks I have visited most since I became an enthusiast. So my question to you today is; what are your most ridden coasters and most visited parks, if you keep such stats?

I’ll get the ball rolling with my own findings.

To get things started, I should preface this by saying that my unique coaster count is 74 and my unique park count is 18. Also, instead of doing this over my whole lifetime, I started from 28th September 2013, which is where I started my coaster & park counts from. This may seem like a somewhat arbitrary date, but it’s significant to me because it was the date of my first Alton Towers visit where I was able to ride all of the big rides, and it’s also the first theme park visit I’d had since I’d say I was properly “into” theme parks. I know my “enthusiasm start date” is something that many have mocked me for in the past, and it probably seems strange that I don’t count what I’ve done over my entire lifespan, but data from before I got into theme parks is somewhat spotty (I’m not entirely sure what I rode pre-enthusiast, and when I visited certain places), and the potential number of creds I’d gain from using such a strategy is extremely small, if any.

Anyway, I’ll get to my stats without rambling too much more!

Overall, since September 2013, I have had 222 roller coaster rides, and I have had 60 theme park days in total.

In terms of my most ridden roller coasters of all time; the top 10 is as follows (there are 3 rides joint in 2nd, so the actual top 10 only takes up 8 places):
In terms of my most visited theme parks (in terms of days spent at them), the top 5 is as follows (two are joint 3rd and two are joint 5th, so the top 5 only takes up 4 places). It’s worth remembering that my total number of theme park days is 60:
In terms of other interesting data; I also have the top 5 parks where I’ve had the most coaster rides since September 2013. It’s worth remembering that my total tally of coaster rides is currently 222:

Here’s my full spreadsheet, if you’re interested to examine my data: 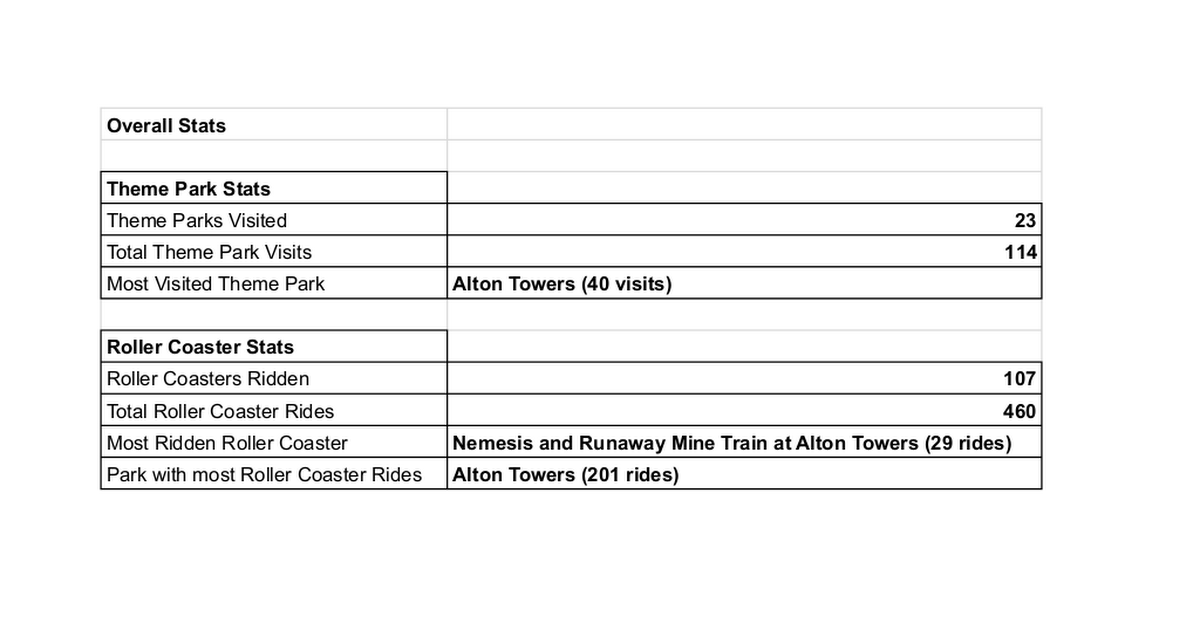 So, what can I infer from my data?

So, those are some of my nerdy stats!

But what are some of your most ridden coasters and most visited parks?
Click to expand...

Right; sorry to bump, but it's been nearly a year since I last did this, and some stuff has changed!

Most ridden coaster - Stealth @ Thorpe Park, with around 50ish rides with the first ride being in early 2016

Most ridden dark ride - Derren Brown's Ghost Train @ Thorpe Park, with 4 (!) rides with the first being in early 2019

Most ridden flat ride - Time Machine @ Adventure Island, with 10 rides with the first being the year it opened (2013?)

Most visited park - Thorpe Park, with 14 visits with the first visit being in 2015

Maybe slightly off topic and yet slightly related. Still need to do my first trip report (oh the effort!), however I did add my coaster notes a couple of nights ago to my spreadsheet for some potential interesting stats. I did 118 coasters and 22 parks in my recent USA coaster road trip. Total of 254 coaster rides.