ATI said:
But it's not straight at all though is it. You could say any layout is straight if you remove enough of the elements.
Click to expand...

Like I said the bulk of the layout is pretty much a straight line. Of course no layout is a perfectly straight line and this one does have some variation with the 2 helices (the final one more significantly), but not enough that it would be a major issue if they were working with a very linear plot of land. With taking the brakes, station, and lift into account, the ride does become an L shaped layout.

A lot of B&M's feature an L shaped layout, but it's usually the hypers. The only other wing with an L shape that I can think of off the top of my head is Soaring Wings at Happy Valley.

Pear said:
Of course no layout is a perfectly straight line
Click to expand...

I mean I'm being pedantic but still

Hey you got me there

For the straight-line purists

The rumour mill seems to be pointing towards this being another Intamin LSM Launch Coaster for IOA.

However whereas the Harry Potter LSM Launch Coaster seems to be more of a family thrill ride intercut with show scenes, it's believed the Jurassic coaster will be more of a 'thrill ride' along the lines of Taron or Taiga. Allegedly construction will begin next year.

It's discussed in more detail in this blog post by Alicia Stella.
http://www.uuopodcast.com/2018/10/the-rumor-mill-is-jurassic-park-roller.html?m=1

What Do We Know About the Rumored Jurassic Coaster?
While the Jurassic Park ride closed in Hollywood and is being transformed into a Jurassic World attraction, it looks like the one at Universal Orlando will remain open (and unchanged) for the time being. Even though Orlando's River Adventure isn't currently undergoing any changes, that doesn't mean the rest of the land won't be. Pteranodon Flyers has received upgrades so we know for sure it isn't going anywhere for a long time. Over at the old Triceratops Encounter however, lots of work continues, preparing for the arrival of an all-new roller coaster rumored to be coming to the land. Let's dive into all the things we've heard about this secret new attraction known only as project 791!

Green construction walls went up around the old Triceratops Encounter plot and some land clearing has started inside. We've found lots of props from the queue of the old walk-throughfor sale at the Prop Shop, including a bag of "Dino Chow" and a Triceratops "poop scoop" shovel. Yours for the low price of only $300! In addition to the work walls, a new Team Member backstage entrance was added behind the Raptor Encounter, so crew can get back there even when demolition equipment is blocking the path downstairs in front of the Discovery Center.

And speaking of the area in front of the Discovery Center, survey markings were discovered on the ground throughout the waterfront space. This fits perfectly with what I have heard about where the rumored coaster will travel. Beginning in the old Triceratops Encounter plot, the ride will snake its way down to the waterfront, passing in front of the Discovery Center, before turning around and making its way back. This would forever change the views from across the lagoon while adding some kinetic energy to that side of the park. 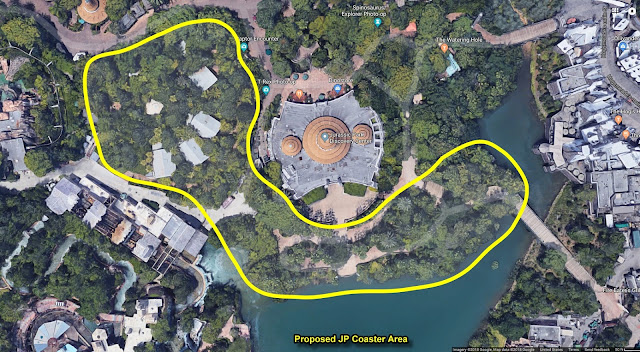 The popular Raptor Encounter meet & greet will be relocated to a new home near the entrance to the Jurassic Park River Adventure to help make room for the new attraction. No word yet on whether the move will be permanent, or is only temporary for construction. Some, or all, of the Jurassic carnival games will be moved, (or removed entirely). A section of the extended queue for River Adventure will be used for the raptor meet and greet.

So what type of coaster will this be? Some of the early rumors had it as a wooden family coaster. Then it was rumored to be the Flying Dinosaur coaster from Universal Studios Japan. Neither of those were correct though, as multiple sources have indicated to me that it will in fact be another launched steel coaster manufactured by Intamin, the same company that is bringing us the new Potter Coaster. It's my belief that it will be an LSM Blitz Coaster, specifically like the one known as Taron at Phantasialand in Germany. 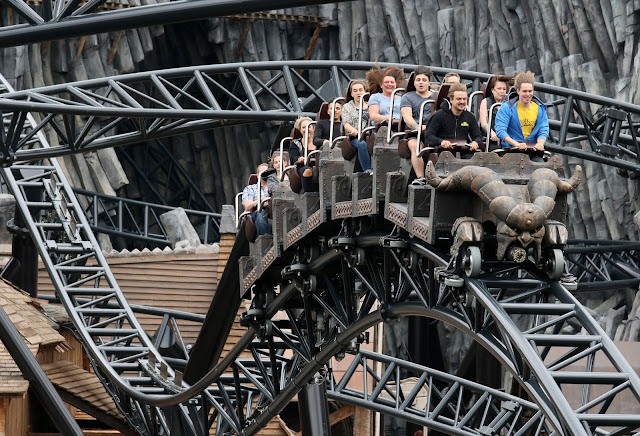 Taron at Phantasialand - Photo by Intamin

Taron is the world's fastest multi-launched roller coaster, the world's longest multi-launched coaster, and it has the most intersecting track points of any coaster of any type in the world (intersecting with itself in 58 places). Opening in 2016, Taron has a similar track style as Cheetah Hunt at Busch Gardens Tampa and Maverick at Ohio's Cedar Point, (as well as some sections of the upcoming Potter Coaster). The coaster train however, is unique, and features a more open seating design. 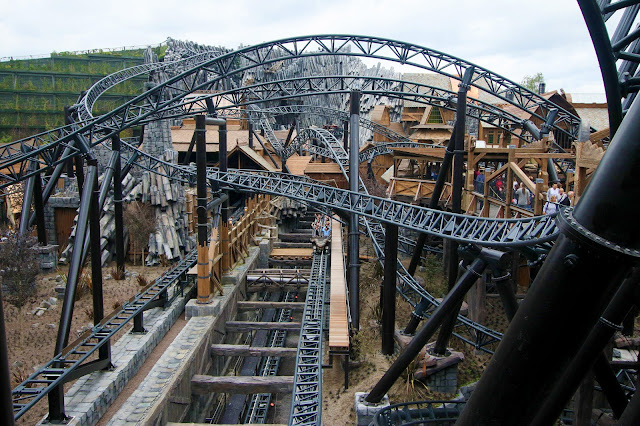 Some of the intersections on Taron - Photo by Intamin

If a coaster like Taron is the inspiration for a new coaster in Jurassic Park, we are in for an exciting experience. With a length of nearly 4,600 feet and speeds up to 73 miles per hour, a Taron-like coaster at Islands of Adventure could give The Incredible Hulk Coaster a run for its money. Can you imagine if there comes a day when Hulk is the second fastest ride at the resort? And if they were to keep the intersecting motif of Taron for this new attraction, it's certainly possible they could pack a pretty big punch in the small space of Triceratops Encounter, with many sections of track overlapping. 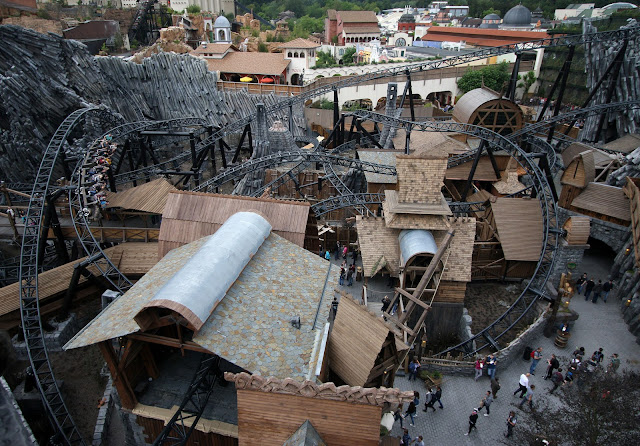 
While the Harry Potter themed roller coaster opening next year may be a more family-friendly experience, I expect the new Jurassic Coaster to be more of a white-knuckle adrenaline junkie type ride. This may be one way that Universal Orlando is listening to the fans that were saddened to see Dragon Challenge go, and are looking for something more thrilling on their vacation. With three full-scale roller coasters and 3 exciting water rides, it certainly looks like the resort is designating Islands of Adventure as their thrill ride park. 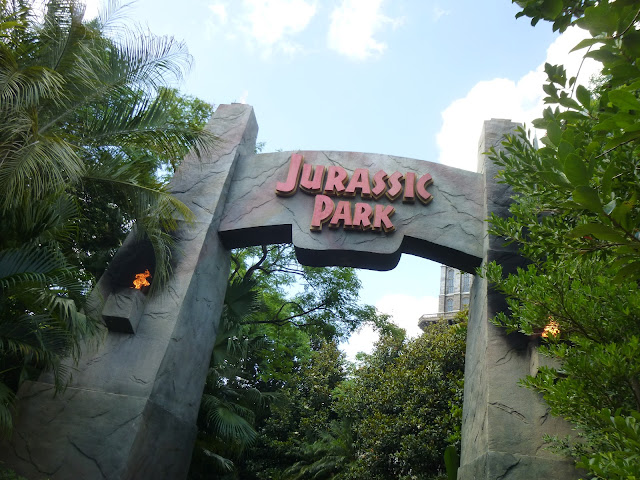 Now, the original rumor was that this new ride will be based on Jurassic World, and may have been part of a planned retheme of the entire land, but with the possibility of Jurassic World attractions being planned for the unannounced new park, it's still up in the air whether IOA's Jurassic land remains "Park" or changes to "World." Actual construction on the new coaster isn't expected to start until next year when the Potter Coaster is nearing completion.
Click to expand...

Wow... if this rumoured Jurassic Park coaster does turn out to be like Taron, then Universal is in for a crazy few years, in my opinion!

The coaster selection at IOA looks to be really improving over the next couple of years, and I didn't think it was bad to start off with! For starters, Potter 2019, while apparently a family coaster, looks to be a far better coaster in terms of physical ride hardware (excluding theming; I had very high expectations for the theming from the start.) than I had originally anticipated, and then we have this potentially world class coaster to add into the mix! If Taron is anything to go by, then this Jurassic Park coaster should be outstanding, and dare I say it; I reckon it could have a very high chance of being the best coaster in Florida. Even if it isn't the best coaster in Florida, it should still be an incredible ride!

It's also been rumoured recently that it could be a Mack spinner or just a launch coaster. However Alicia tends to have great sources.

One thing that seems to be clear from the stream of rumours from the insiders is that a launch coaster of some sort is coming to the Jurassic Park area in the next few years and that's very exciting.

Can't wait to see what ticket prices will be in a few years.

Whoa, Taron plus that new HP coaster plus Hulk plus Spiderman plus Forbidden Journey plus all the water rides?!? If this ends up being true, IOA could very well be the best attraction collection in Orlando. Jesus, all that plus Nintendo Land for Universal plus all of Disney's rides (Star Wars Land, Mickey Mouse, GotG, Ratatouille, TRON) means that Orlando is going to be a madhouse of new rides in 5 years. Exciting times for a theme park fan like myself . Plus, I can get (legally) drunk at Disney World by 2020, which will make the whole thing much much more fun (except the prices oi)

As for the likelihood of something like Taron coming here, I'd say it could certainly happen. If Universal Japan can open something as insanely intense as Flying Dinosaur, I'm sure a launch coaster could open. Universal placing itself as the more thrilling alternative to Disney would be smart, as it has done them very well thus far. Everyone I talk to about Universal or Disney mentions Hulk as one of the best rides in Orlando. Imagine what they would think if they rode Taron

Is it known whether this is coming in 2020, or is it scheduled to be coming later? The main rumour I'm hearing around the internet for this is an Intamin Blitz Coaster, but this will apparently be a more thrilling one a la Taron or Taiga, as opposed to a more family-oriented ride like the new WWoHP coaster opening next year.

Ah right. Thanks for the clarification @gabe! 2020 will certainly be an immense year for Central Florida, as well as 2021!

Wait... Where's your source that said it'll open in 2020? The coaster hasn't even been announced yet. For all we know, the construction fences are for something else and the park could be focusing most of their money on the fourth park, we don't really know for sure.

gabe said:
Just based off of things I've heard as well as rumours from other forums
Click to expand...

Ok... So no evidence then. Sounds about right.
I doubt this will open next year tbh, that's if the rumours of a coaster are even true. I'd imagine that if they did build this rumoured coaster, 2021 might be a good year to open it, as to counteract the opening of the coasters at Disney down the road.
You must log in or register to reply here.
Share:
Facebook Twitter Reddit Pinterest Tumblr WhatsApp Email Link
Menu
Log in
Register
Top