An adventurous journey through the Chinese Sea awaits...
Past the Sumatran Jungle.
Batavia is burning and you want to go there? 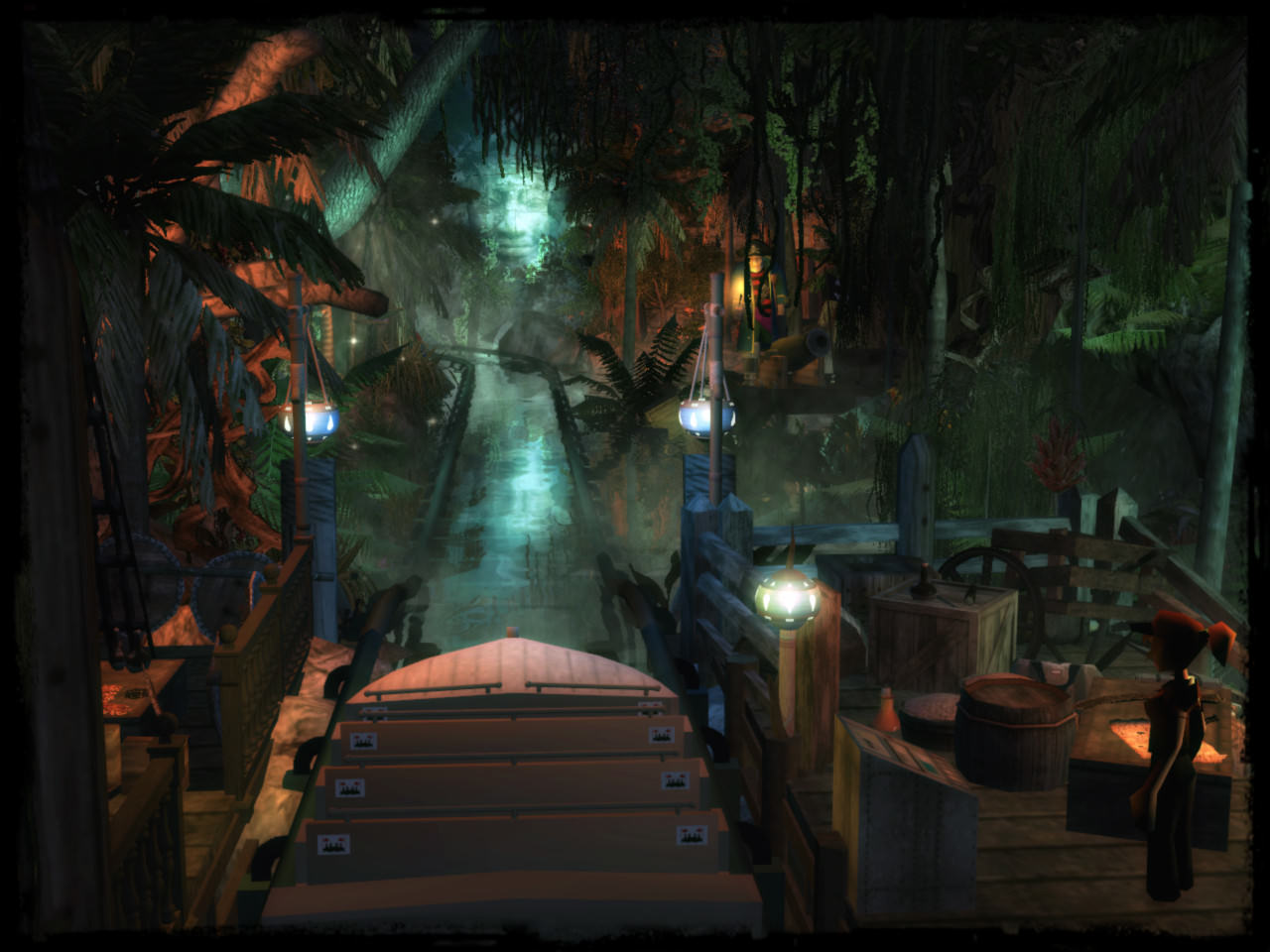 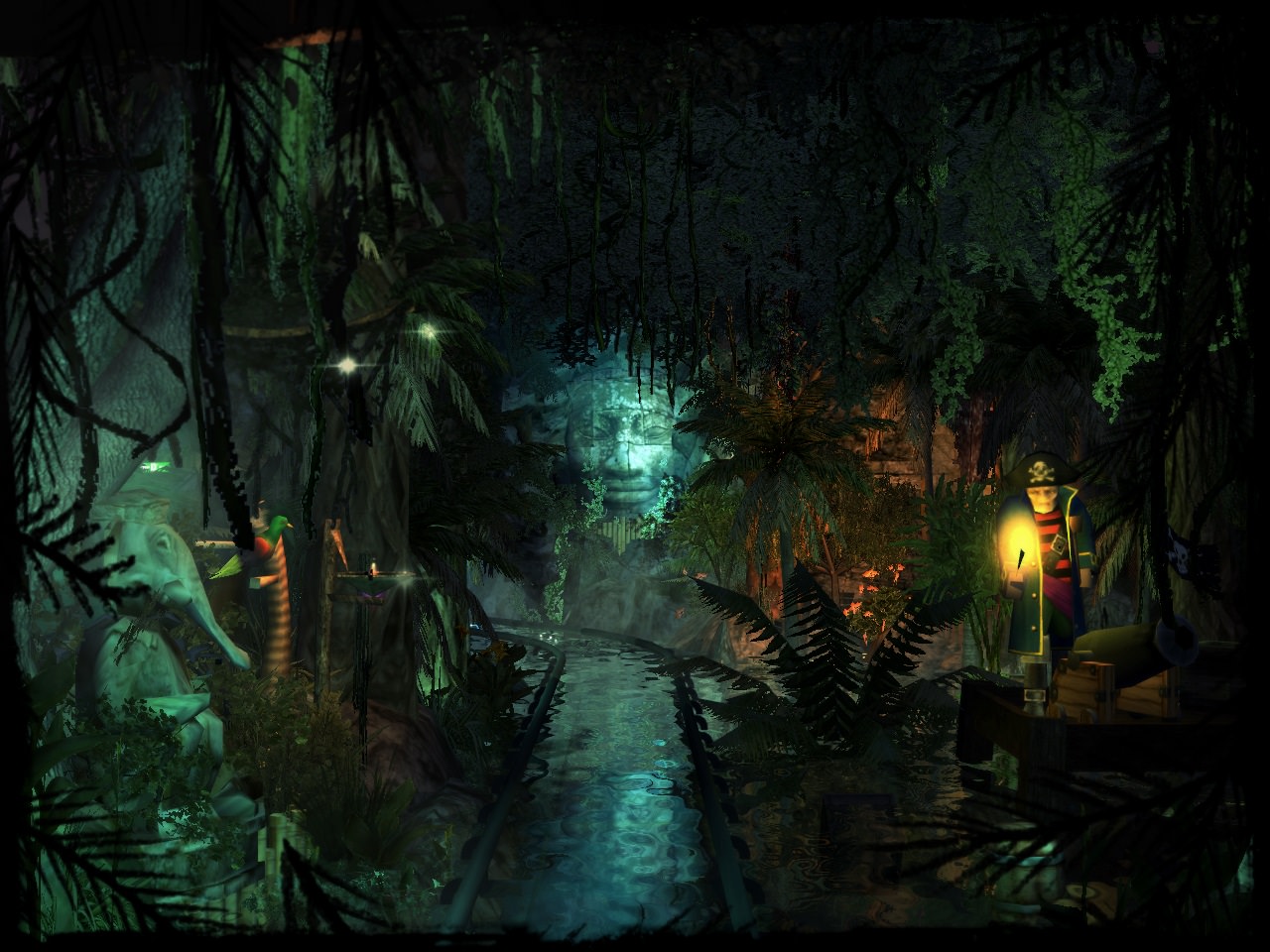 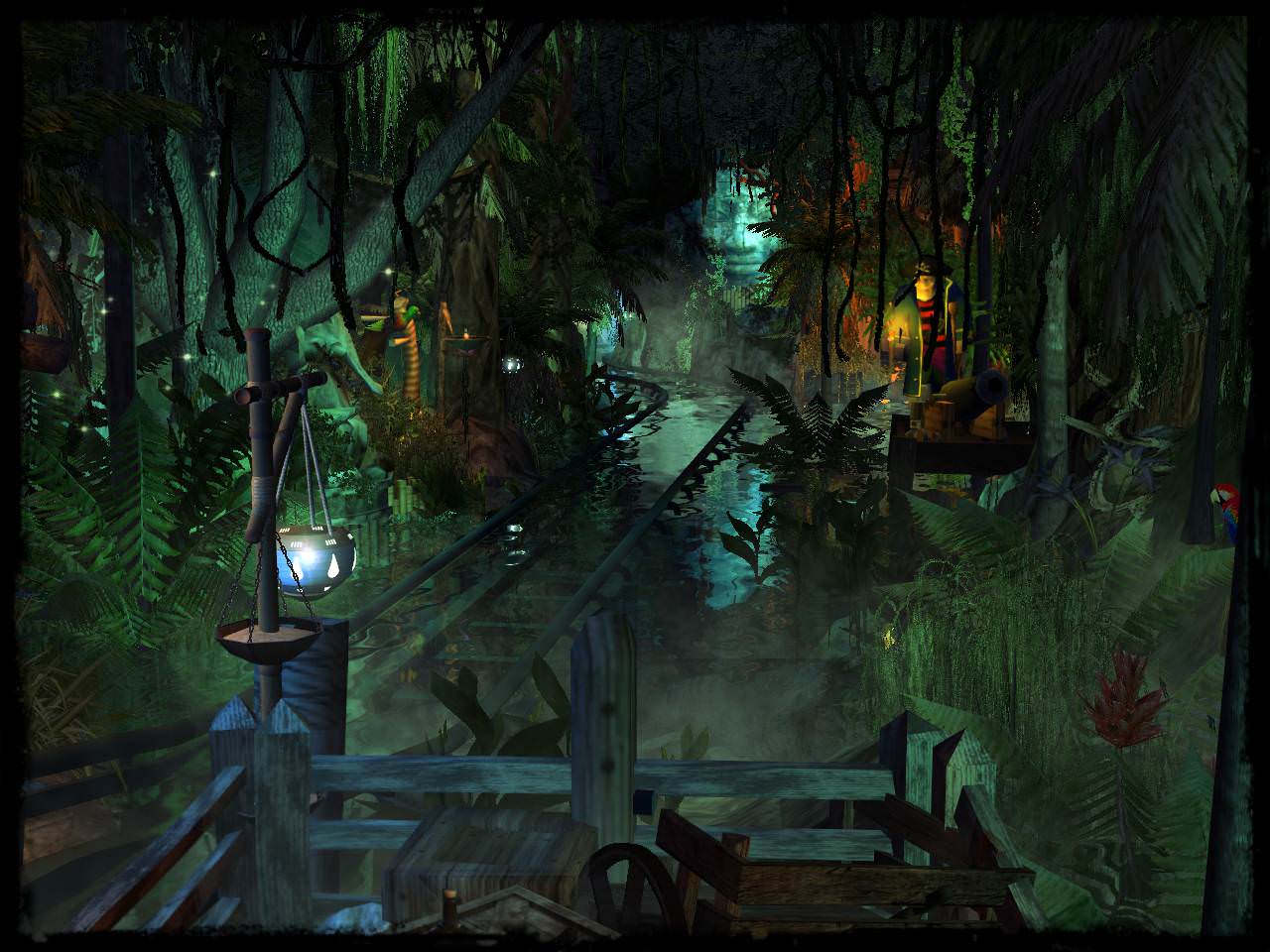 Staff member
Administrator
Moderator
This is looking really good! Especially considering how RCT looks when it's fresh out of the box. Looking at, say, the pre-made scenarios, one could never believe the game was capable of looking this great.

So, did the Europa Park fire inspire this? 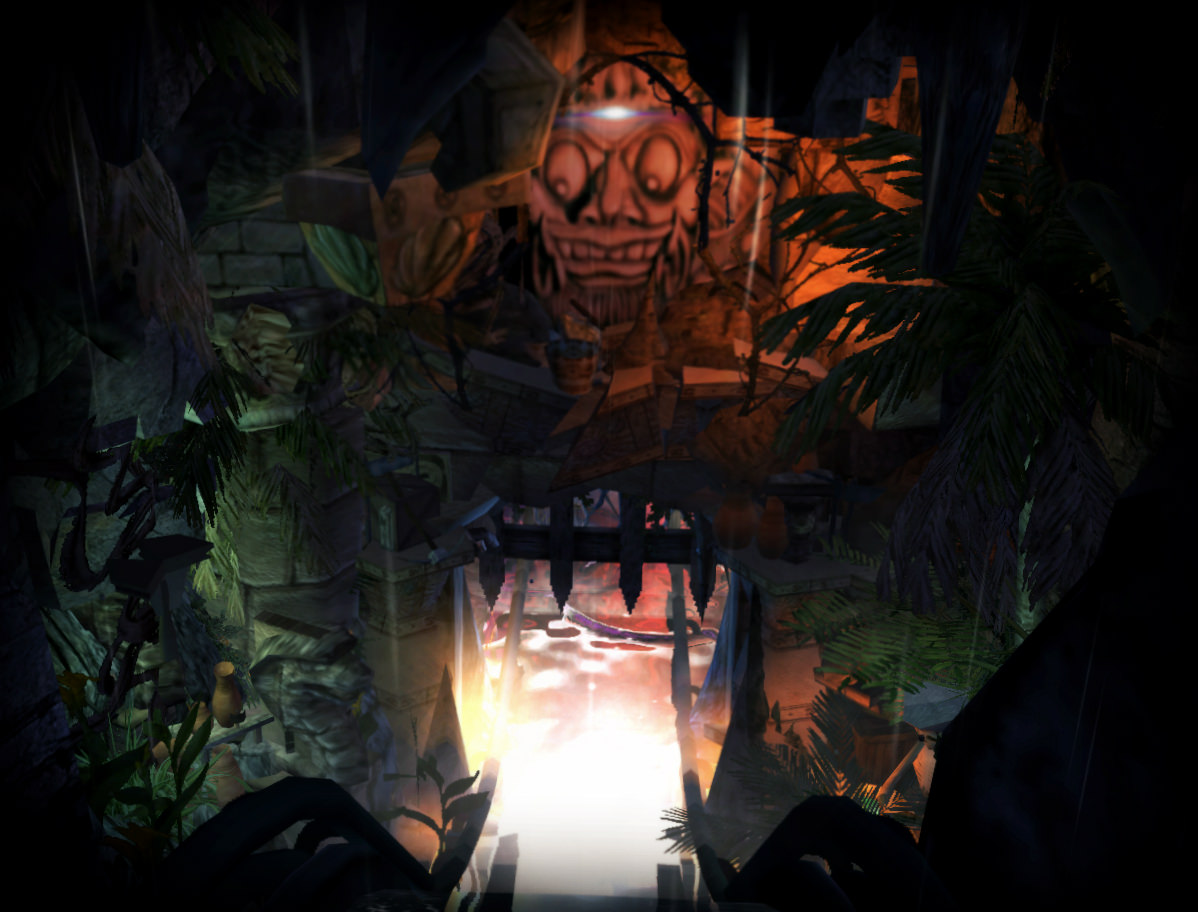 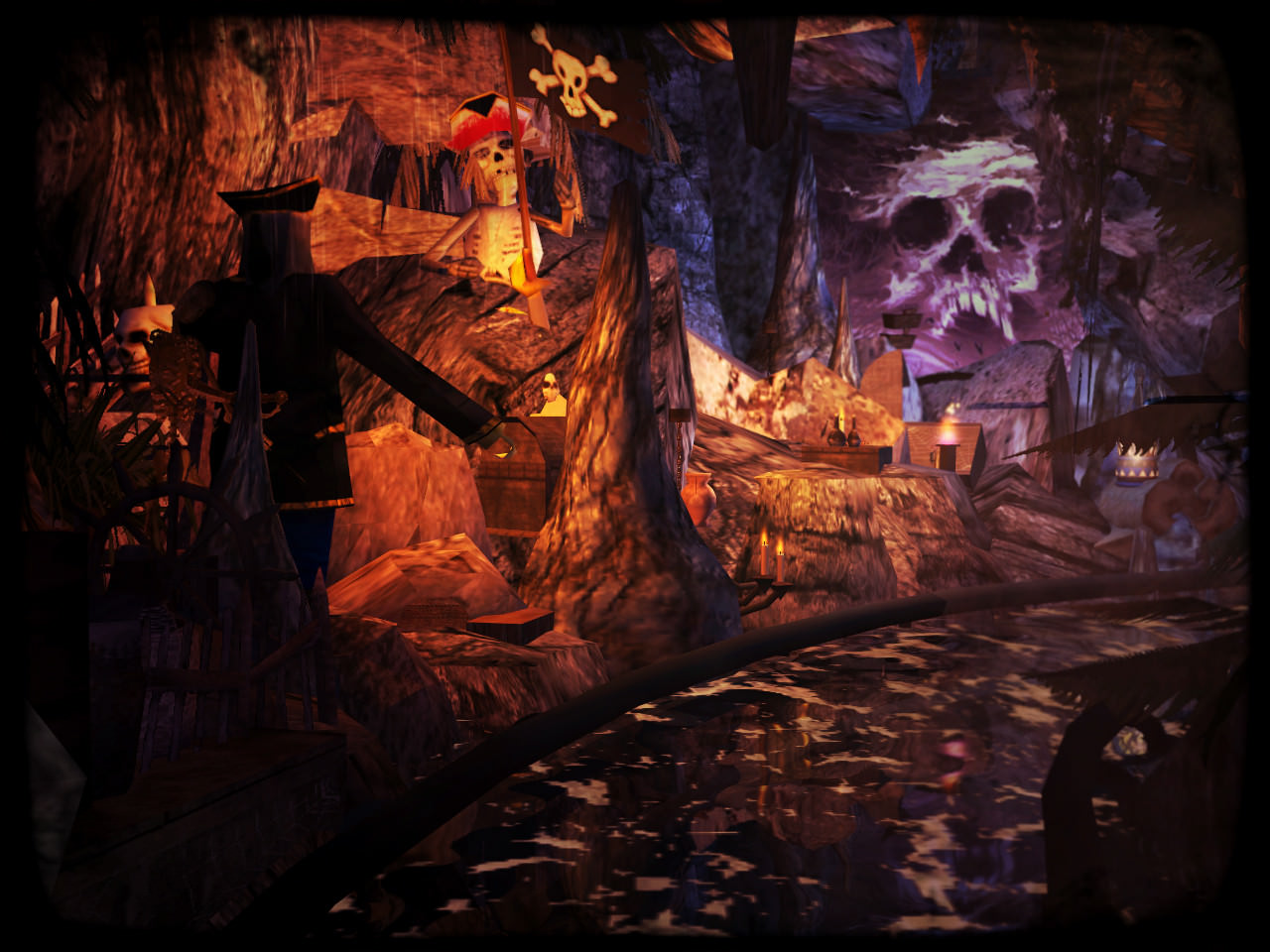 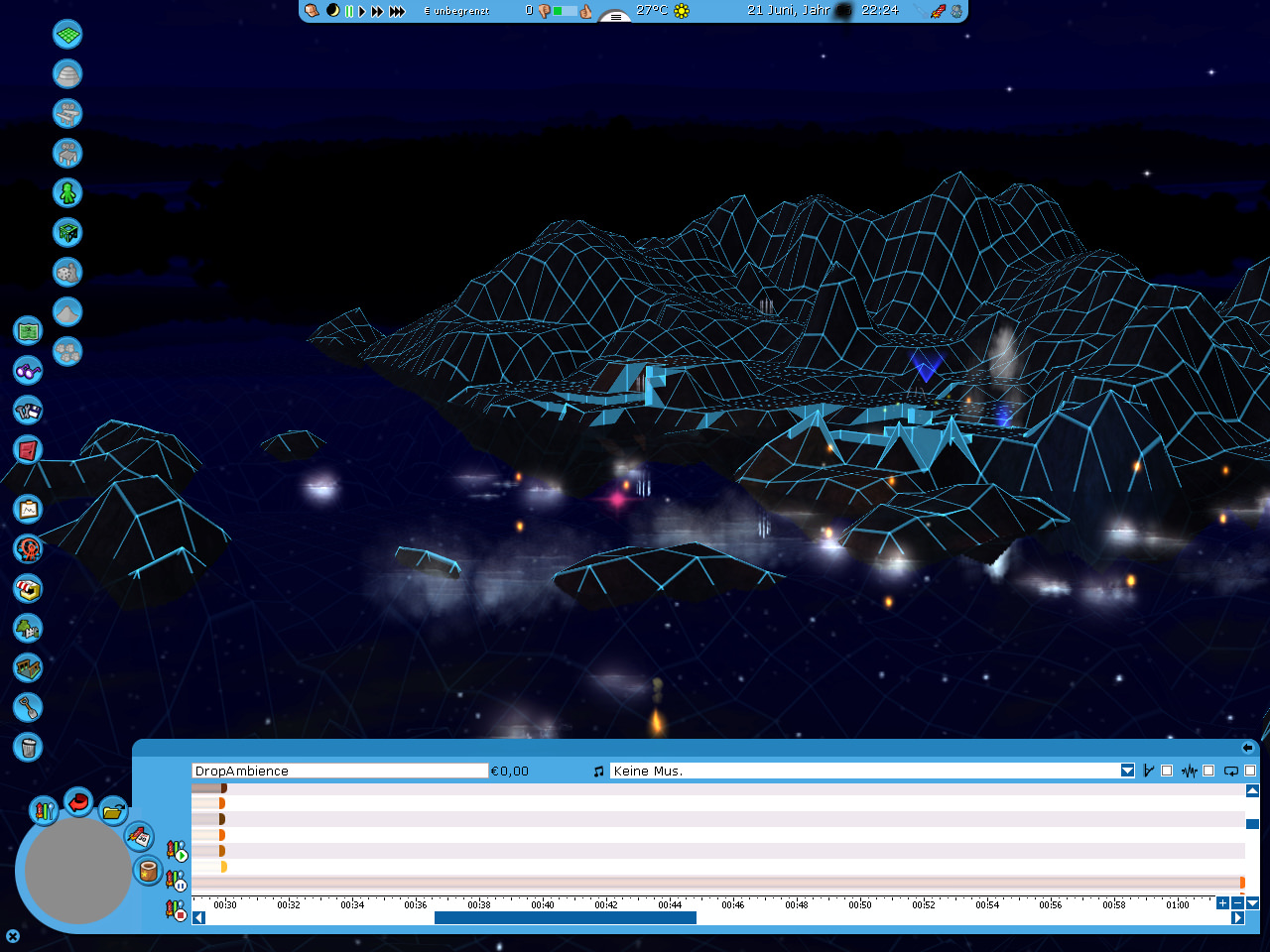 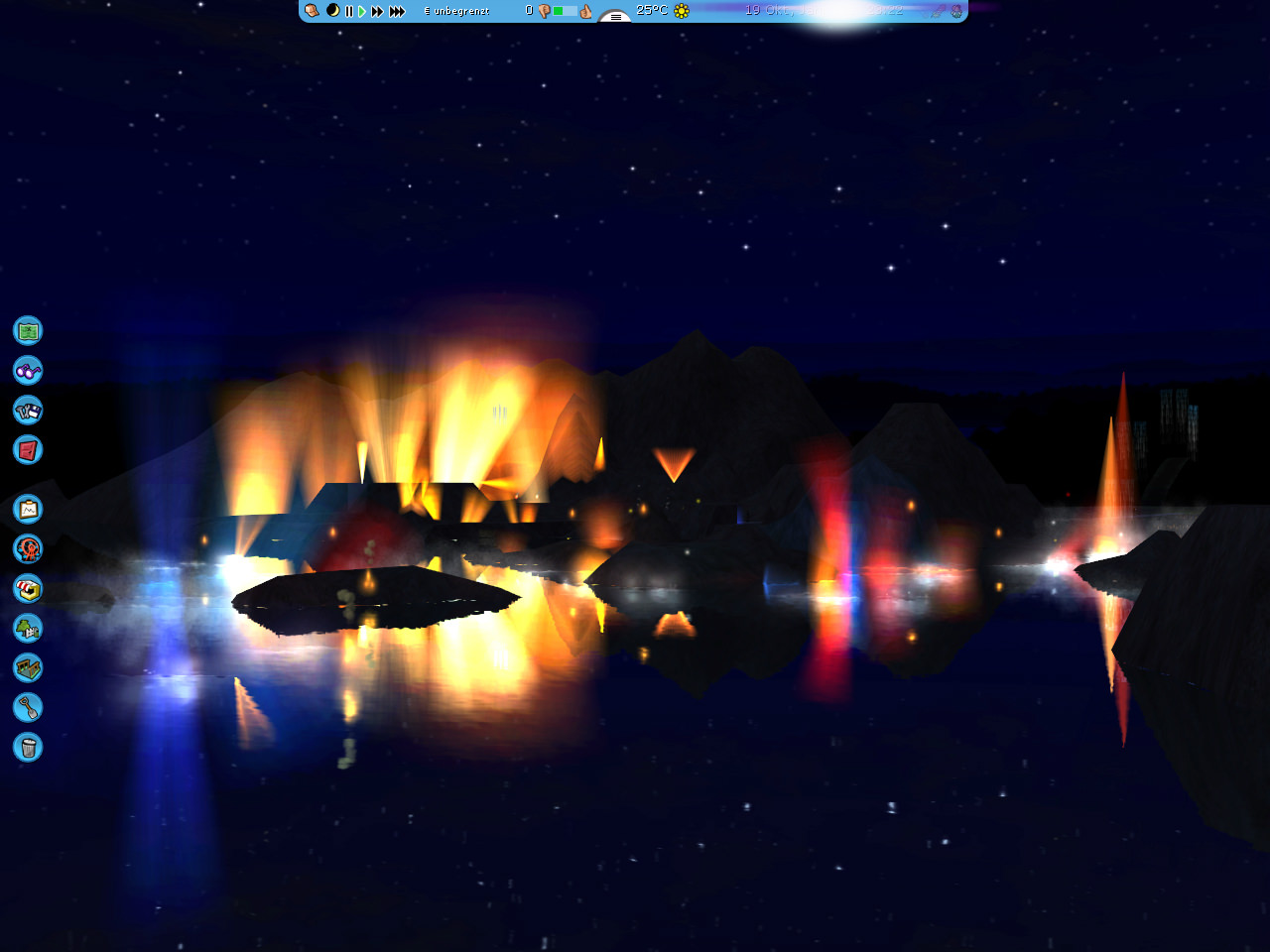 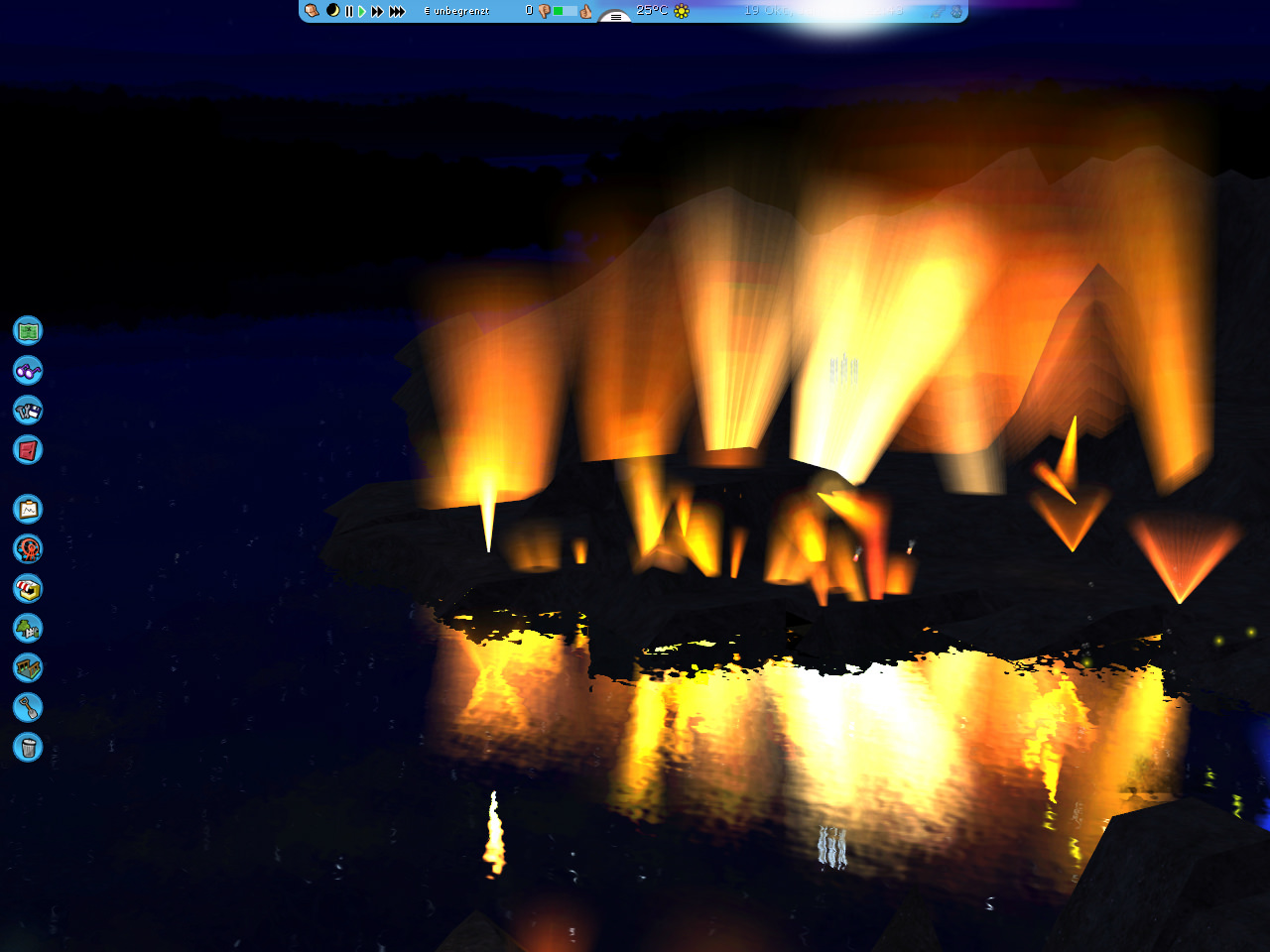 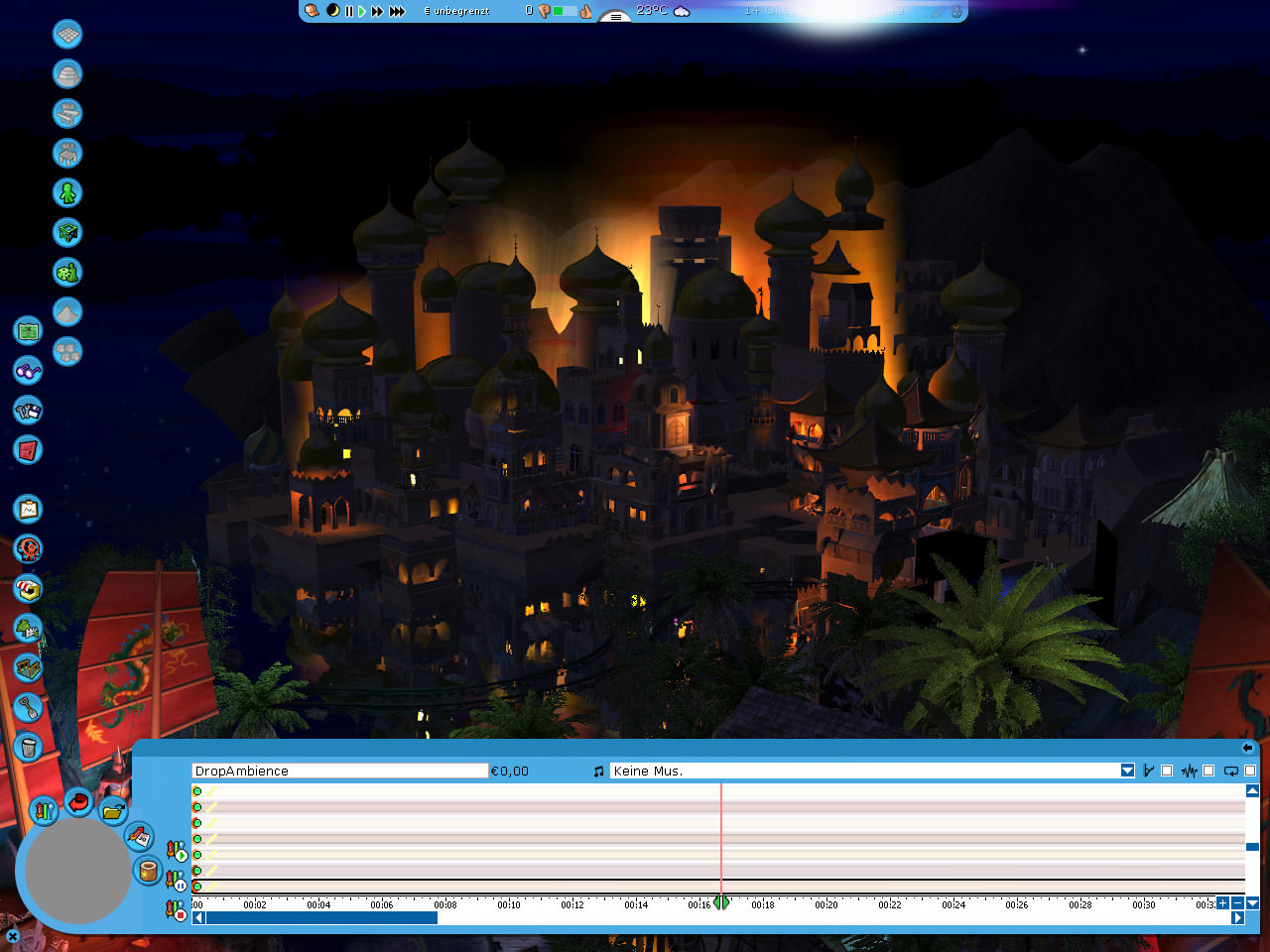 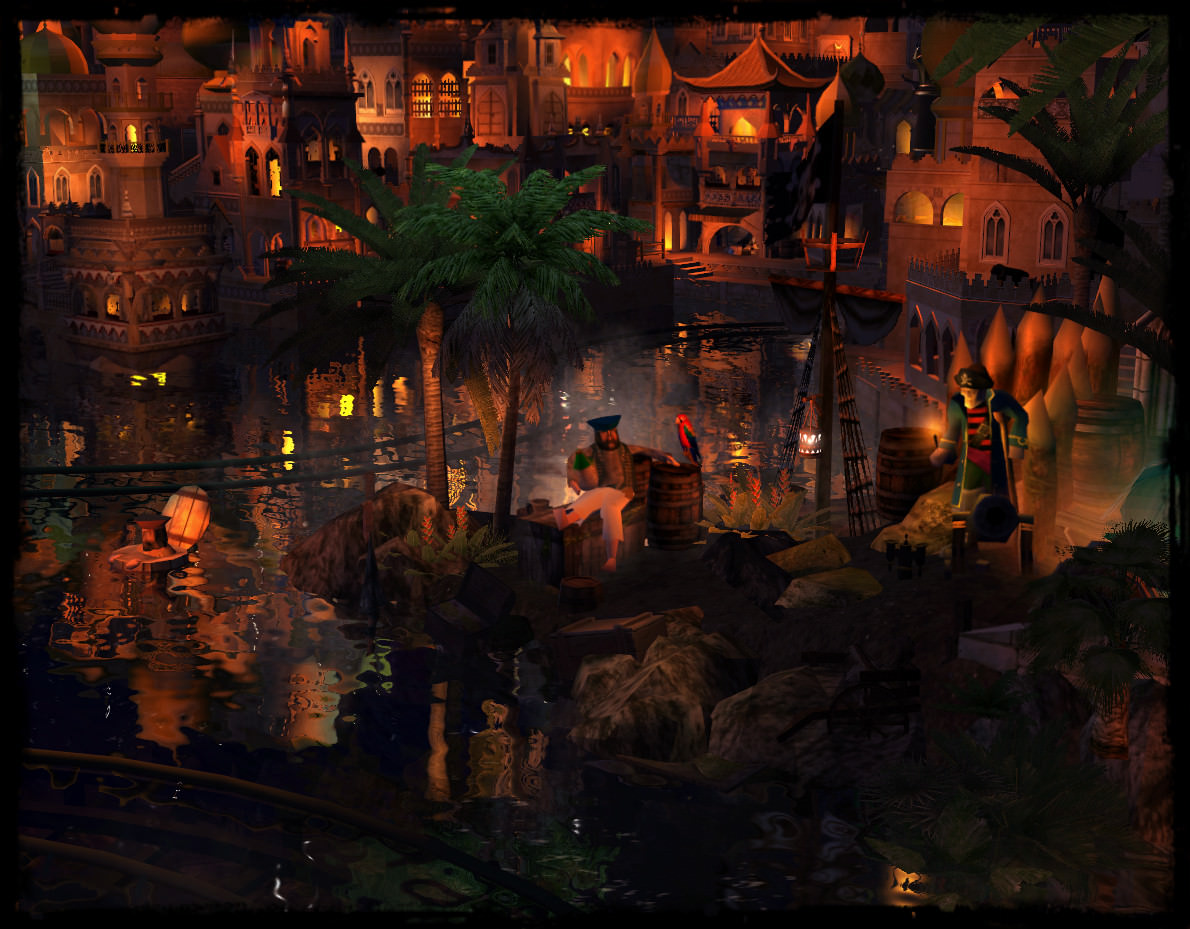 another concept art showing the almost finished station area.
you can see the ride operator standing near the control panel dispatching the boats .
also more details were added... 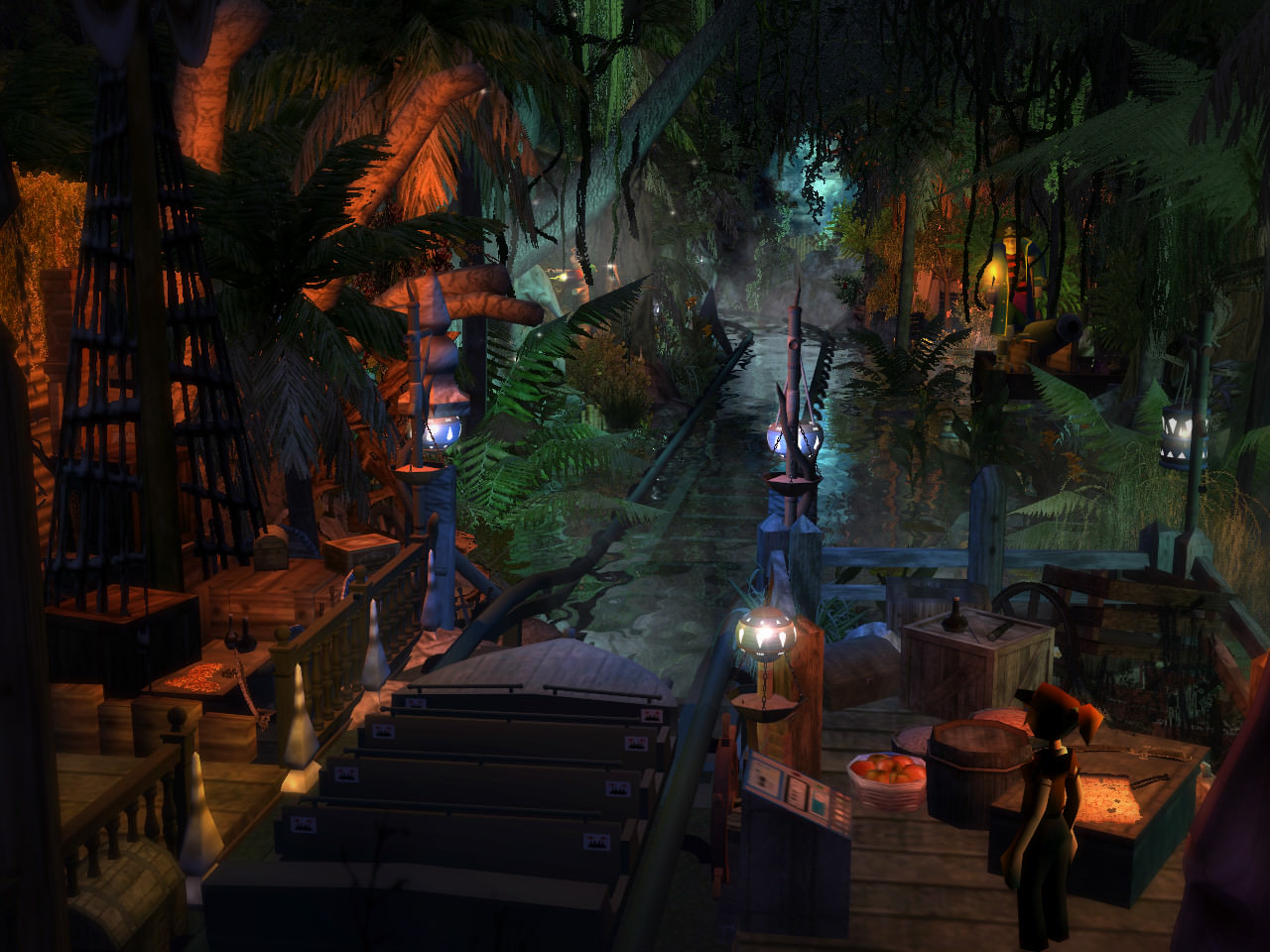 another one showing the entrance plaza: 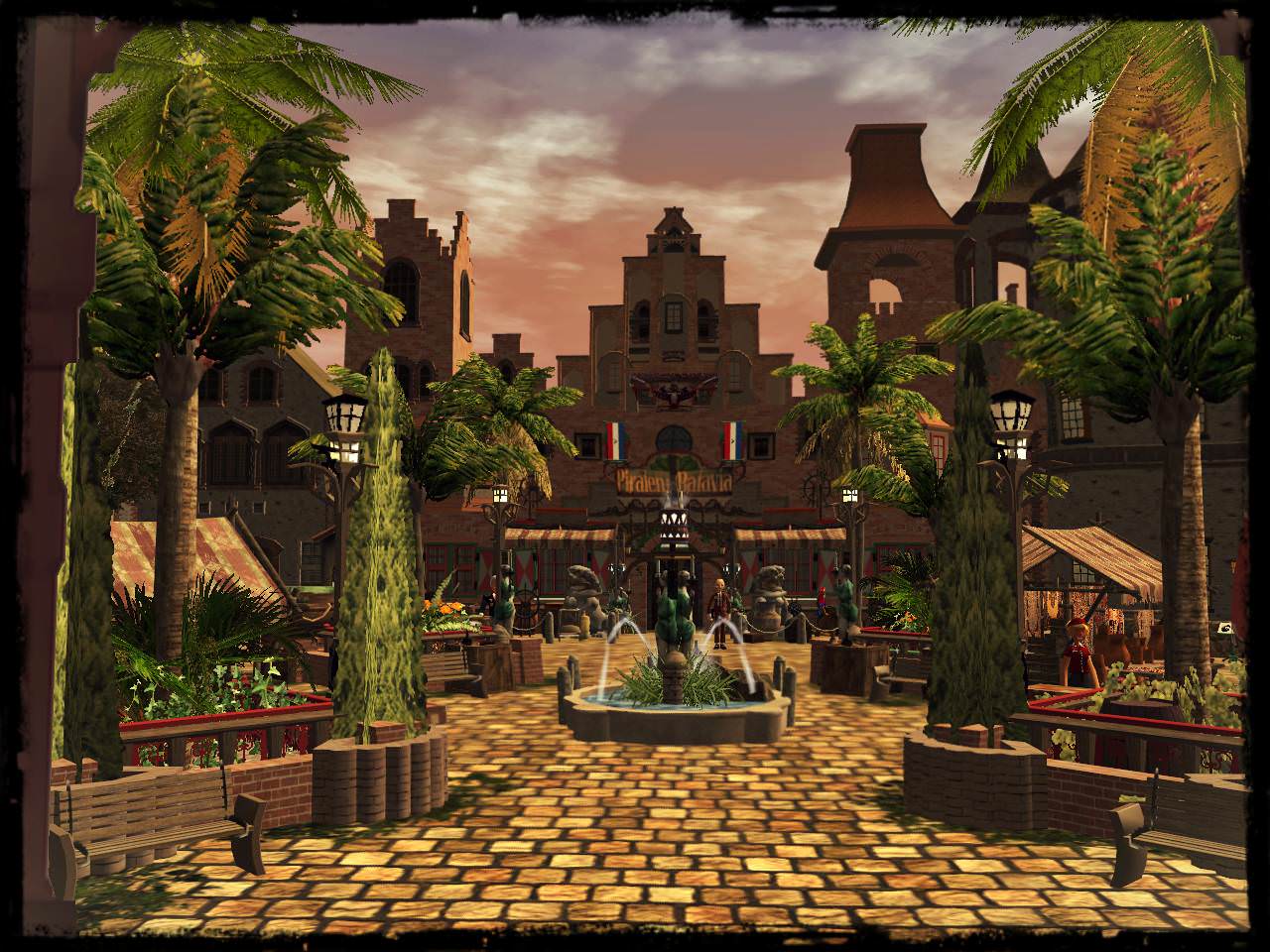 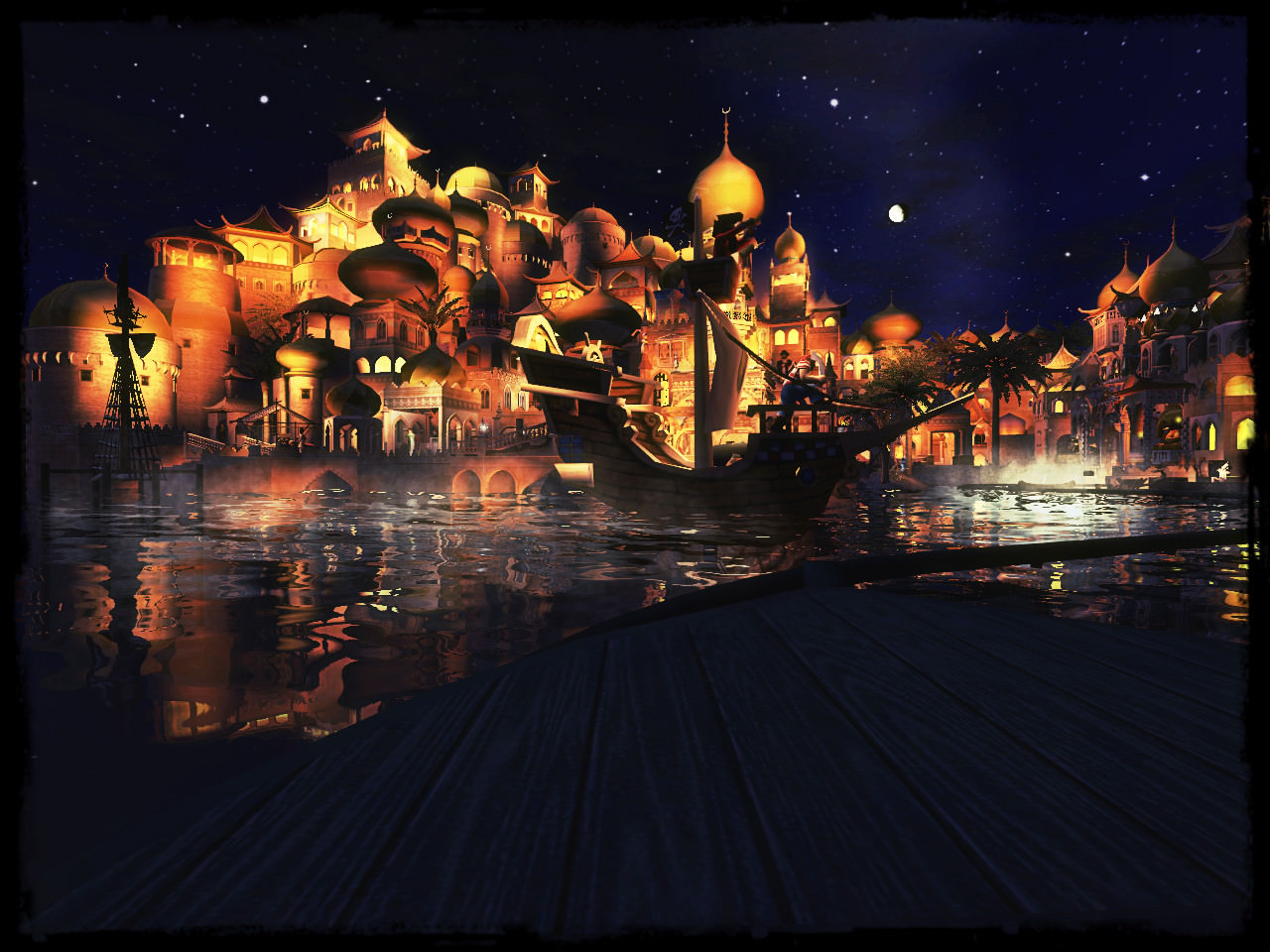 I've made some progress over the weeks: 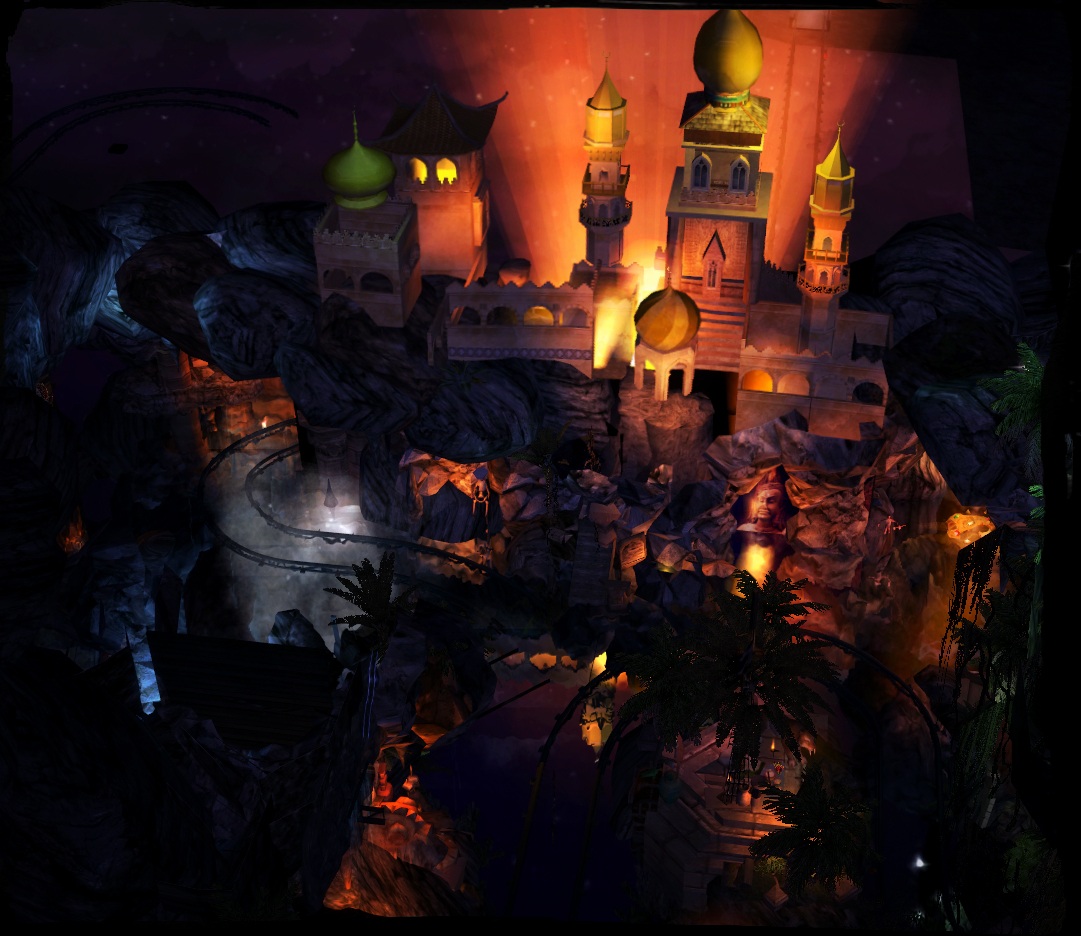 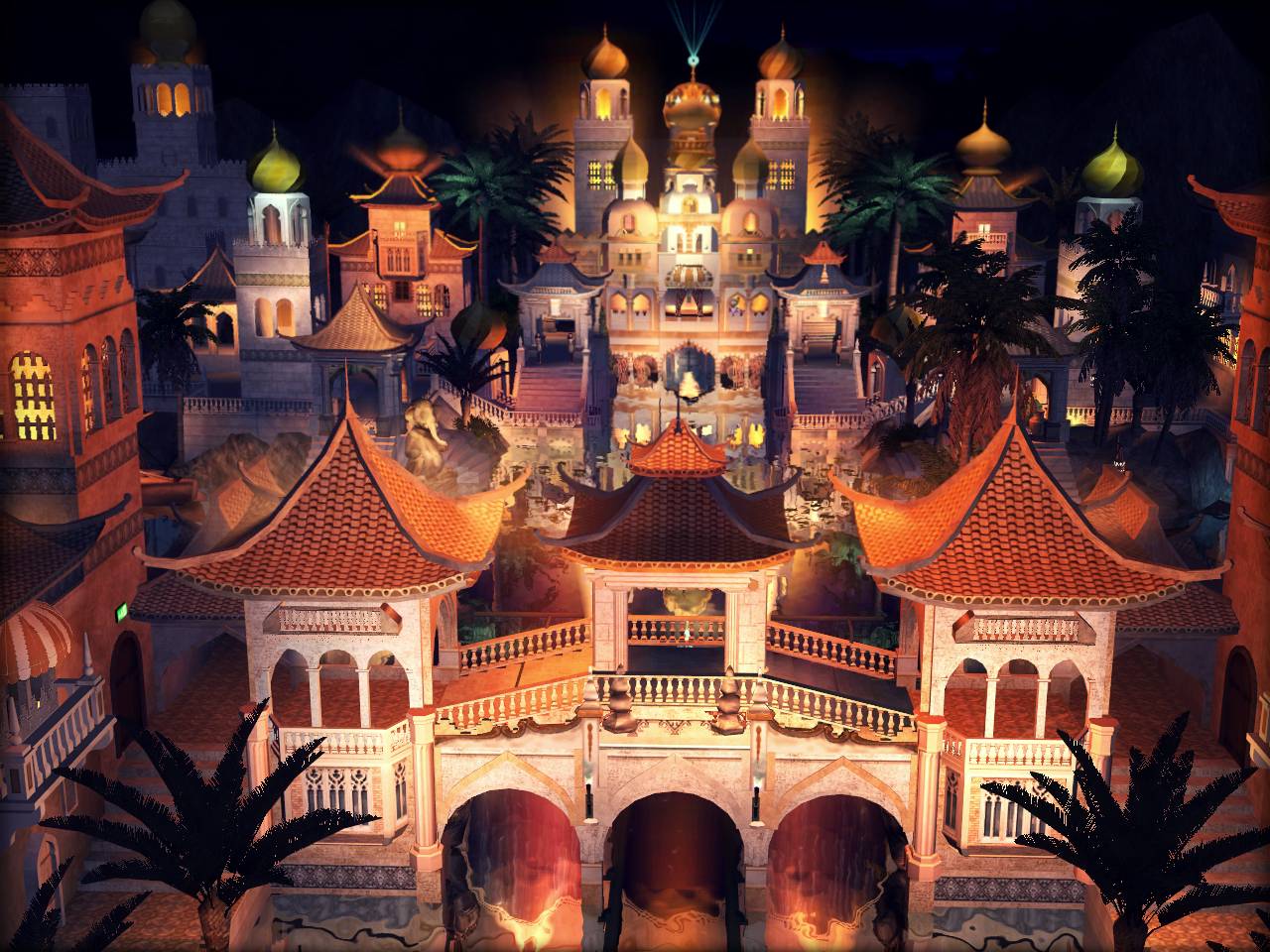 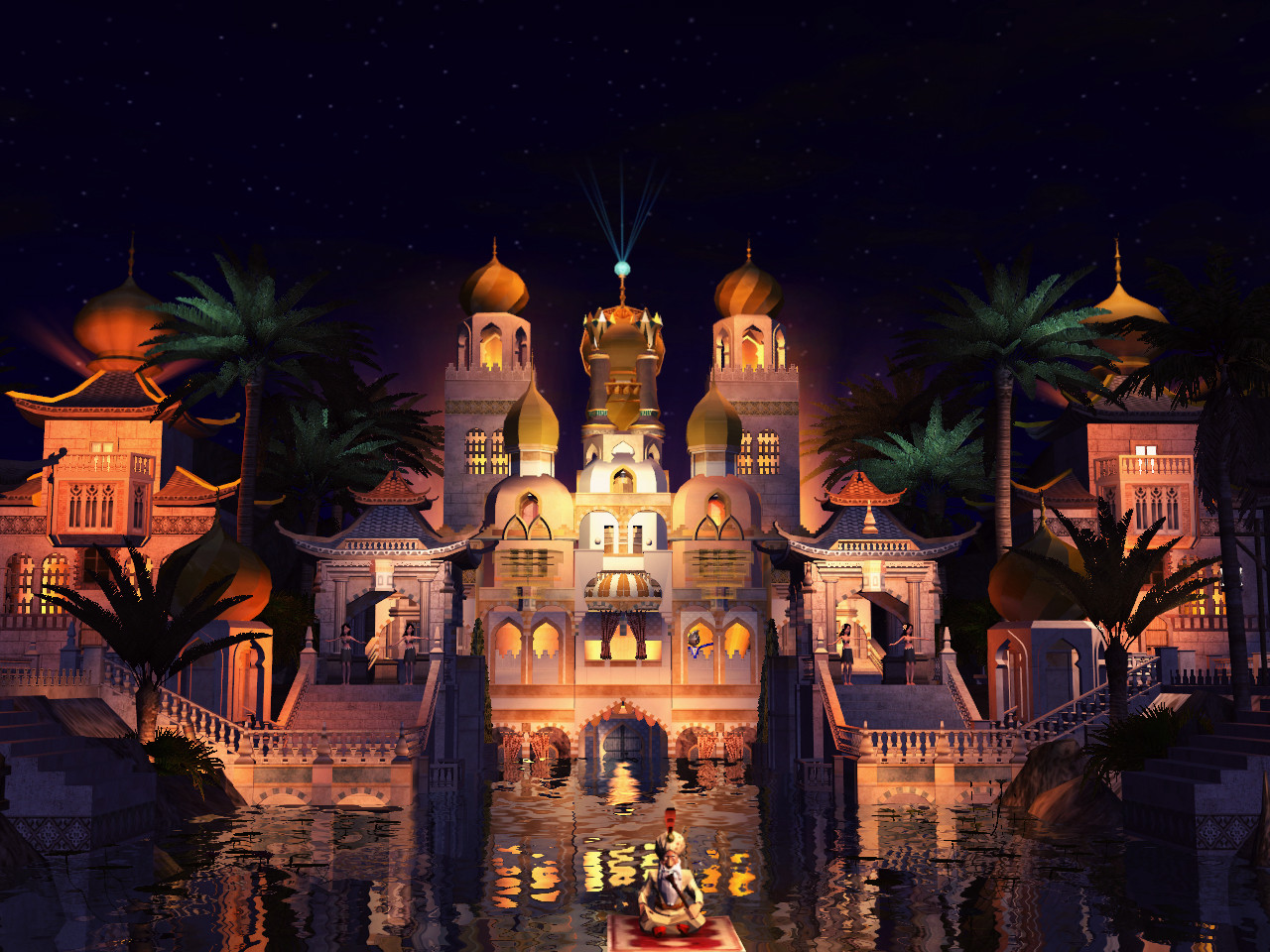 Here a description of the ride story line. Maybe it helps to understand the scenes:

The queue is similar to the original one but not so much dolls.
We pass the sleeping chamber of pirate Surabaya Jim sitting there in its deadly appearence.
Walking through vaults and jails we reach a secret pirate hideway of the dutch east india company, supported by foreign pirates.
Perhaps also members of the Adventure Club Europe are part of this team. In the middle of the jungle this hideway has been chosen by the dutchmen. Walking down a tunnel we reach the pier of Batavia ,where the boats are waiting for us. A big skull is shimmering in the moonlight and we dont know what to expect out there. In the background we recognize some tribal huts and a pirate is expecting us to board.

We are entering the boats and are lowered into the water.
Firstly a calm ride passing by the pirate and the jungle. But then we discover a magical cave and a statue infront of it.
The musical tension rises and we see a pirate discovering some kind of tribal treasure. Magical forces are revealed.
Protection spells of the tribal are active now. Statues begin to shine and water fountains are rising from the ground.
Now we are entering a temple ruin and are pulled up a lifthill. The music gets more dramatic. There are snakes and statues again.
Then we see a magical stone relief before we are going down.
A parrot shout can be heard and we are rushing down the first drop...

Suddenly we are in the middle of a pirate battle. Jakarta town is under attack. Past ships and pirates we are reaching a lagoon where Surabaya Jim is lying infront of Batavia. Also the pirate we saw at the secret hideaway is part of the battle.

As we are getting closer to the town we recognize a magic portal, which opens and sends us into darkness.
So we are in the vaults and catacombs of Jakarta now.

As the ride continues we see a magical statue, a genie and a wonderlamp before we reach the jungle again where a temple ruin can be found. TigerRoaring and thunderclaps can be heard and a few seconds later we see the "Feuertiger of Batavia".
Our way is blocked and the boat stops. As we go backwards the tiger turns into fire.

The ride and the music gets more exciting now, and we are rushing by another temple and some relicts and statues.
As we go deeper into the temple complex the tribal protection spells make our journey much more difficult.
So we are locked into a secret chamber but luckily magical forces send us out again.
The boats go forward again and we are reaching a mine ,where still some workers can be seen.
As the mine collapses a magician spells a portal, so we can escape.

Then we are in the middle of the palace district of Jakarta, which is not attacked yet.
We ride through a bridge and see a Fakir on a flying carpet hovering above the water. A harbour bell can be heard and we are discovering an arriving pirate ship. A pirate and his woman are standing on it. They want to give us the "treasure of sea explorers".
Seemingly not a good idea because only wise adventurers can handle this kind of treasure.
There is also a magic ball with a belly dancer behind it.
So another portal opens its gates and we see the magic ball again, but suddenly it disappears.
We are going up a lift again and the ghostly forces of the treasure are revealed.
A genie projection can be seen and the atmosphere is mystic.

After the ghost disappears we are in a cave and a curve leads us into another one, where a mask is shining.
The boat drops for the second time and we are getting photographed.

An exotic jungle full of animals awaits us. Water fountains are coming out of some water plants and the magic ball of Batavia is glimmering in the dark. There is a magical power in this ball someway.
Then we see a ship in a lagoon and in the background a vulcano.
Also the parrot has found his way back into paradise and welcomes us!

Past exotic flowers and animals we recognize the restaurant "Bamboo" ,where also a stage is located. Some dancers are doing a show. The visitors in the restaurant can take a glimpse of the boats floating by. We see a tiger and a little later we reach a waterfall lagoon, where an explorer is standing. Perhaps a member of the Adventure Club Europe.
Then we are back at the hideway and the pirate from the beginning is expecting us.

The Exit of the ride is directly connected with the entrance to the restaurant, so hungry pirates can have a meal there after their ride.
Load and Unload is seperated. The boats are unloaded and return back into the loading station.

So enjoy the ride ​

and finally the Making Of:

Staff member
Administrator
Moderator
Social Media Team
I'd love to see a film build timelapse of this, the amount of detail is spectacular.