Hi guys. Now, I know Christmas was over a week ago, but today was the day that I got my main Christmas present; a trip to Hyde Park Winter Wonderland! This was great for me, both because it started my 2020 theme park season within days of the year starting, and because I had wanted to visit the event ever since Olympia Looping first arrived at it in 2016; that ride has had so much hype, and I was very excited to finally ride it! We arrived at the park at around 2:30pm: 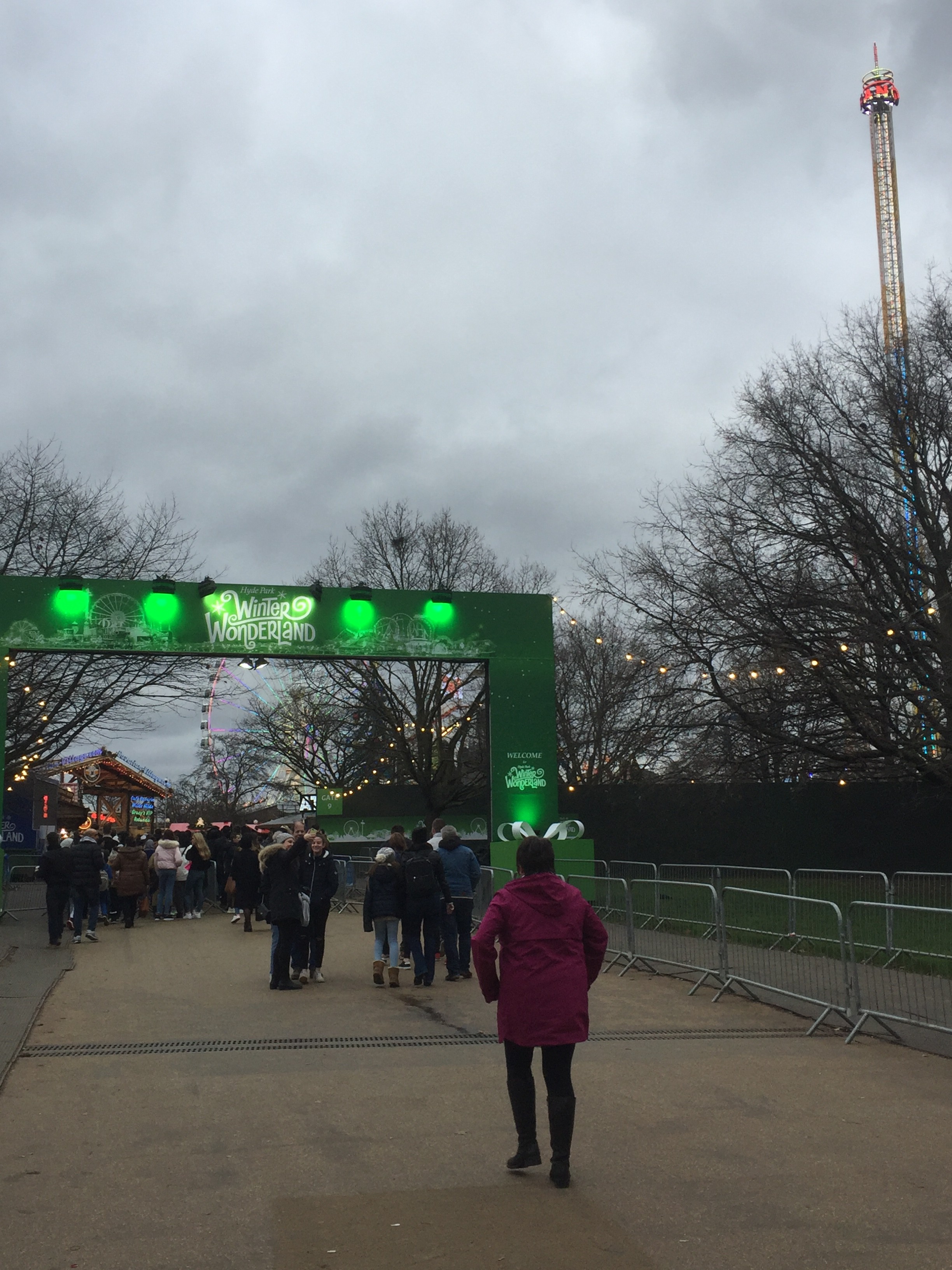 Naturally, our first ride turned out to be the main thing I had come for...
Olympia Looping
So, we got our tokens and joined the queue for Olympia Looping. The queue wasn't actually too long, and it was made even shorter by the fact that the dispatches were lightning fast! The riders were getting into the train, and the train was being dispatched seconds later! So efficient; well done, guys! So, did Olympia Looping live up to the hype? If I'm being honest, not really. Don't get me wrong, it's an absolutely phenomenal feat of engineering as far as travelling coasters go, the layout is good, and I'm glad I rode it, but I don't think it was quite as overwhelmingly fantastic as I thought it would be, and there are two key reasons for this for me. The first of these reasons is probably more down to my personal taste; I almost think the ride was a bit too intense for me. Even though I didn't grey or black out on it, the loops provided a very different type of intensity to anything I've ever felt before, it made me feel a little nauseous and I found it somewhat of an unpleasant sensation going through them. Secondly, I wasn't overly keen on the restraints; despite not being overly tall, I found the cars quite tight to get into, and the hard plastic shoulder harnesses tightened a lot and really made my shoulders ache. Despite these flaws and it not living up to my personal expectations, I still think it's an admirable ride considering it's a travelling coaster, with a good layout: After Olympia Looping, we headed to another coaster, which was...
Ice Mountain
Now, unlike with Olympia, I very much knew what to expect with Ice Mountain. It was my 4th Reverchon spinning mouse, so I very much know the type of experience they provide. However, I must admit that Ice Mountain was perhaps the most spinny of the Reverchon spinning mice I've done; by the end of the ride, the car was spinning madly, and I could barely walk in a straight line getting off! Also, the lighting package and theming did elevate it slightly; the theming in there is actually really good considering it's a travelling ride! Even though I still wasn't a massive fan of the ride and found it quite rough, these elements were certainly surprising: 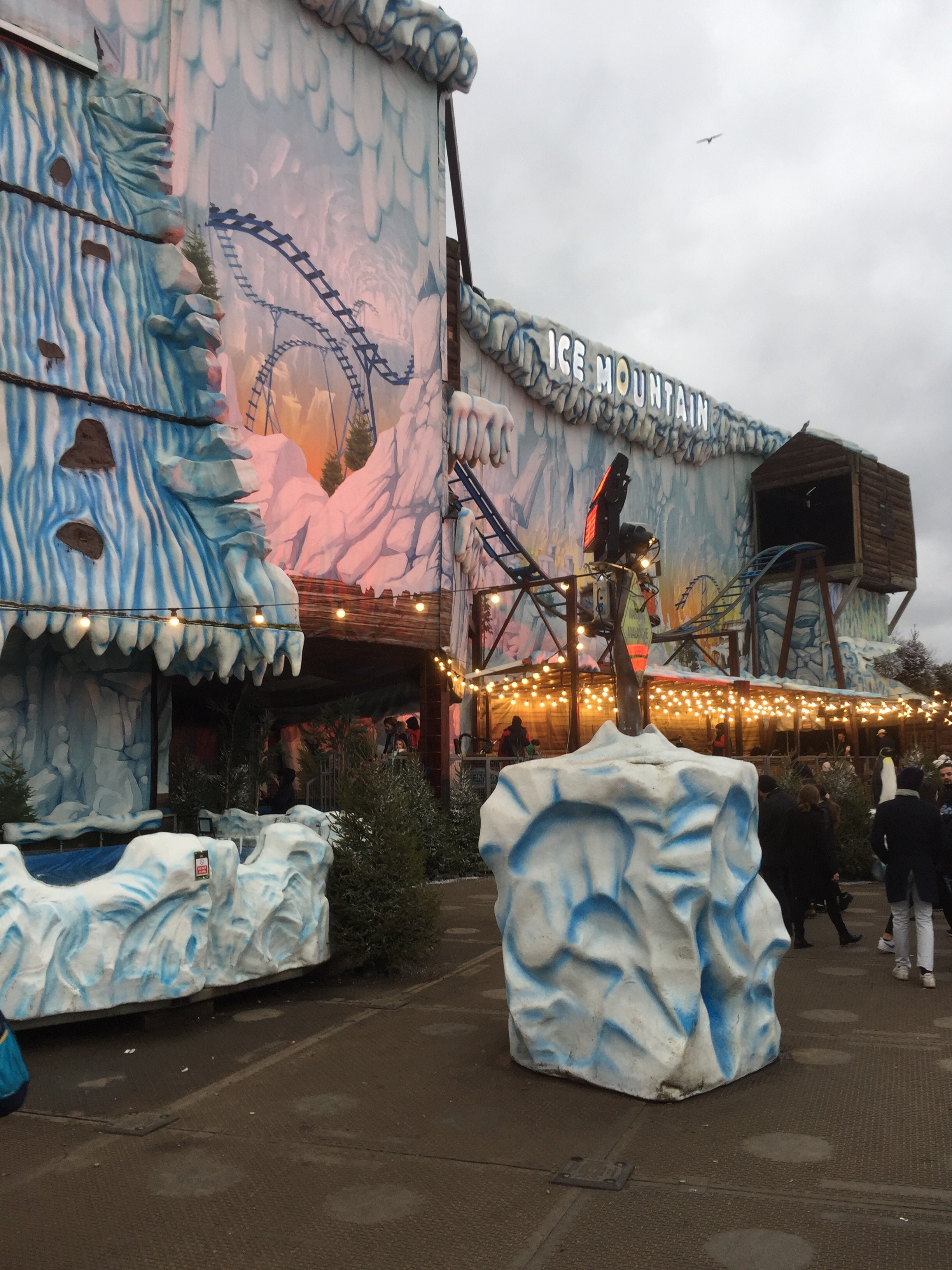 After that, we managed to find another surprise coaster that I wasn't expecting...
Spinning Coaster
Now, I didn't even know this coaster existed, but my parents asked me if I wanted to ride it, so I naturally said yes; as they say, a cred's a cred! It turned out to be another Reverchon spinning mouse, but I oddly liked this one slightly more than Ice Mountain, as it was a touch smoother: After the surprise coaster, we moved on to...
Wilde Maus XXL
Now, I must admit that I'm not generally a fan of wild mouse coasters, but I was intrigued to try Wilde Maus XXL as it seems to get much better reviews on the whole than your average wild mouse. Before I get onto the ride, let me begin with the queue. The queue for this ride is certainly... different. It's basically like a mini-funhouse, and it certainly spiced up the queueing process! In fact, it created one of my most embarrassing theme park moments ever; in the queue, there were some rollers in the floor. On this particular obstacle, I struggled to maintain balance, and I very nearly fell over and hit the poor person in front of me! Thankfully, I just about managed to prevent this from occurring, but it was still very embarrassing! After the unique and fun queue, we got onto the ride. So, how was it? Well, the ride certainly kept up a greater pace than your average wild mouse, and the large drops were good fun, however the ride was very, very rough and hurt quite a lot, even in comparison to other wild mouse coasters I've done. The speed certainly elevated the ride, however the rough nature of it meant that I wasn't personally a fan at all: 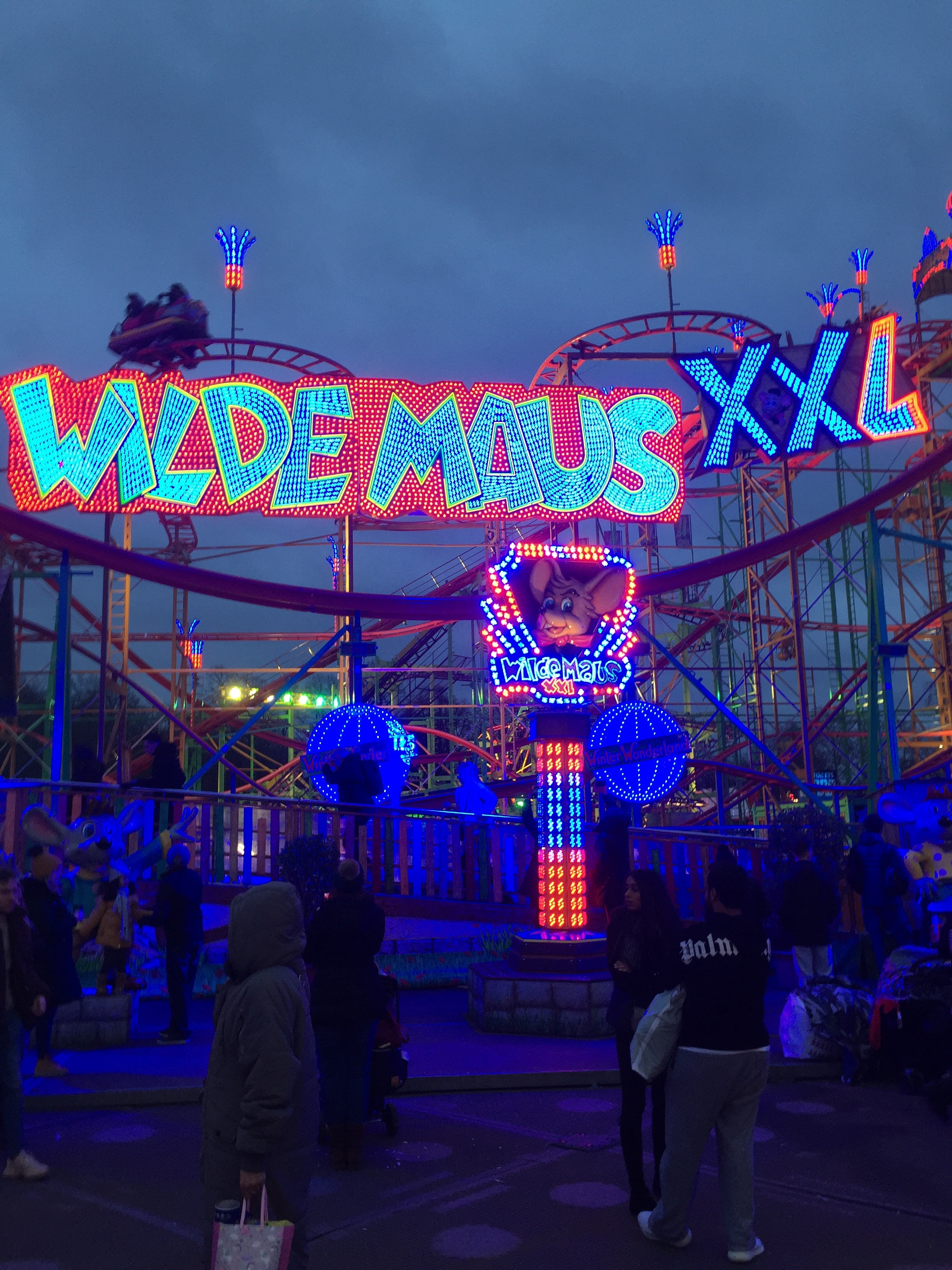 After Wilde Maus XXL, we moved on to our final coaster...
Euro Coaster
Now, I wasn't entirely sure what to expect from Euro Coaster, as I thought it looked a bit wild mouse-esque in some parts, but it looked totally different in others, not to mention that it's a suspended coaster. Like Wilde Maus XXL, Euro Coaster also had a mini-funhouse queue, although thankfully this one did not generate any embarrassment! That being said, standing up properly was easier said than done when we were waiting on the rollers! So, how was the ride? Well, it was certainly... different, to say the least! Oddly, I'd actually say I enjoyed it more than your average wild mouse coaster as I didn't think it was as rough (other than some slightly abrupt braking in places, I didn't actually think it felt that rough at all), although it felt like it was going to stall in places. So overall, although I wouldn't have said that Euro Coaster was brilliant by any means, it wasn't actually a bad ride for what it was, and I enjoyed it a little more than I expected to: 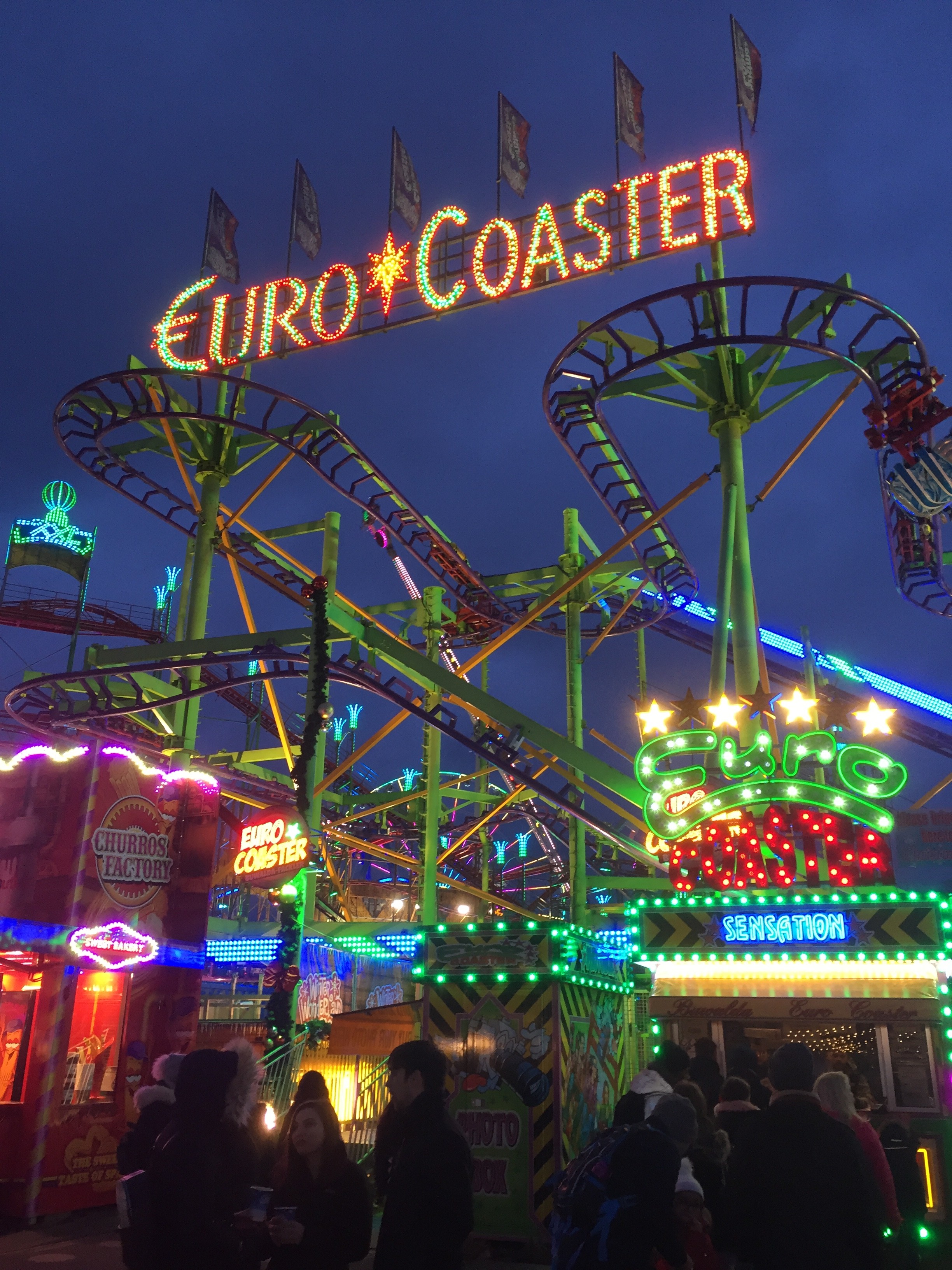 After Euro Coaster, I headed on my own for a ride on...
Hangover
Now, Hangover was recommended to me by another forum member, so I decided to give it a go. I do actually quite like drop towers, and this one was particularly tall (85m, to be exact), so I was looking forward to it, although I must admit I tried not to elevate my expectations too much because it was a travelling ride and I'd never really heard much hype for it. So, how was the ride? Well, let me tell you that I hugely underestimated Hangover! Despite hearing that taller drop towers don't tend to be as forceful as smaller ones, I thought that Hangover had a fantastic drop, with great forces! The views of London from the top were also amazing, even though I was extremely cold at the top! Also, I think the operator deserves a mention with this ride; he had real enthusiasm and was playing a different song over the tannoy each time, even timing the songs to do with where the ride was in its cycle, with his own voiceover being added now and then! So that was a nice touch! All in all, Hangover was an excellent drop tower that massively exceeded expectations! In fact, I'd say it was my personal favourite ride at Winter Wonderland: After Hangover, we headed for a final dark ride on Olympia Looping; my thoughts on the ride were exactly the same as before, although the shoulder harnesses seemed even tighter than last time. That being said, it is a very good-looking ride and a real marvel of engineering considering it's a travelling coaster, and at night, it looks stunning with all of its lighting: After that, we headed back to our hotel.

Overall, I had a very good day at Winter Wonderland! The event itself is really nice, and there's a lot more to do there than we actually did; there's tons of food and drink stands, there's loads of ice attractions, like the ice skating rink and the Magical Ice Kingdom (which we did actually manage to get a peek into the final part of from the shop; the sculptures looked phenomenal!). Even though Olympia Looping didn't quite meet my expectations, it was still a good ride, and I also loved Hangover!

Hope you all enjoyed my report, and I hope my great day at Winter Wonderland bodes well for my 2020 season!
Last edited: Jan 2, 2020

Apologies for the current lack of images towards the end of the report; imgBB is presently playing up. I'll get them in as soon as I can!
EDIT: They're in now!
Last edited: Jan 2, 2020
Y

My wife and I were in London between Christmas and New Year (to see a show for my wife's xmas present) so we stopped by Winter Wonderland. It was a lot better than I thought it would be (probably helped that it wasn't busy at 11am). The whole place has a really nice atmosphere and lots of stalls, food places and more rides than I expected. I'd probably need to take out a second mortgage to actually have a good time there as everything costs a fortune but for a quick walkthrough and one go on Olympia Looping it was worth the minor detour to our day.

Speaking of Olympia Looping, I was really impressed with it. I agree with you that the restraints aren't great and it took me a minute to mange to actually get in the seat, once I was in they didn't feel restrictive (or even tight enough to feel entirely safe ?). The actual ride though was great, my coaster experience is very limited but it felt very smooth and I think I pretty much just grinned from ear to ear and laughed the whole way round. The first drop was so much steeper than I'd realised and the ride is much longer than I'd thought as well.

The only (sort of) comparable coaster I've been on would be Colossus at Thorpe Park (big, looping, sit down) and while I'm sure I enjoyed it at the time my only real memory of it is coming off with a banging headache having bounced my head of the restraints the whole way round. I had no such issues on Olympia.