I swear there was a thread for this? I must be going mad.
Anyhow this is a fairly decent sized new park opening in Suzhou, China this year. The park is being built by Huayi Brothers a large film company over in China and will utilise many of their IP's. Think kind of Universal Studios Lite.

The Junior is a standard model roller skater type while the spinning coaster is a brand new custom model and one that looks rather good.
The B&M wing is expected to follow the same layout as the currently unopened ride at Hotgo Dreamworld in Fushun

Pictures are as usual hard to come by so some of these are super old.

Some of the best photoshop ever right here.

The ride is expected to be a clone of this ride (below) although this is the only picture I've seen of it so far. (above) 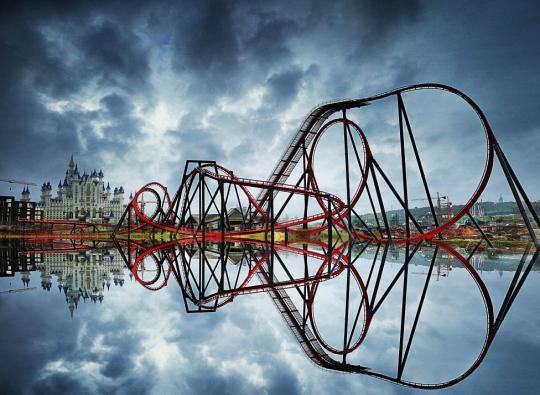 Hmm, yeah I swear you already made a topic, couldn't find anything using the search tool though. Maybe I'm just used to seeing your social media posts about it.

That photoshop job on the spinner is incredible.

Is that enormous statue part of the park? Very impressive indeed.

One thing I will say about Chinese theme parks is that they seem to have very impressive theming!

Hey, any idea why this is still under construction on rcdb ? Is he wing actually open ?

Video of the wing coaster. Odd that the train has 8 cars.

Quite a few of them have 8 car trains, Gatekeeper, a number of the chinese ones, and X-Flight, to name a few.

And here come the POV's:

I was going to post those several hours ago but I could not find it for the life of me. The search function needs work.

Anyone notice layout similarities between this and the one at Colourful Yunnan Happy World?

CrashCoaster said:
I was going to post those several hours ago but I could not find it for the life of me. The search function needs work.

Anyone notice layout similarities between this and the one at Colourful Yunnan Happy World?
Click to expand...

This is a clone of the Hotgo wingrider tho.

Quite a bland layout this, even for a wing coaster. Majority of the elements are those corkscrews and zero G rolls that crawl over the apex. I'm not a fan of the push/pull flow of the bigger wings although I imagine it rides smooth as butter.

I'm on the opposite side of the coin. I would love to see a clone of this pop up somewhere Stateside (hello, SFGAdv: looking at you). I'm completely in love with the wing over dive and loop combo - I'd imagine that the sustained positive Gs would lead people to believe that this model is a more intense wing coaster. The rest of the layout flows quite nicely as well. It looks like all of X-Flight's sexiness in a slightly bigger package.
You must log in or register to reply here.
Share:
Facebook Twitter Reddit Pinterest Tumblr WhatsApp Email Share Link
Menu
Log in
Register
Top