Hi guys. Since Tussauds' purchase of Thorpe Park in 1998, Chessington & Thorpe Park, two of the UK's largest theme parks, have operated under the same corporate umbrella (Tussauds from 1998 through to 2007, Merlin since 2007) within very little distance of each other; both parks serve the London area, and they are only a very short drive away from each other.

Tussauds' initial reasoning for purchasing Thorpe Park was in order to eliminate Chessington's closest competition within the South (Thorpe was a family park to the same, if not a greater, extent than Chessington at the time, and as John Wardley put it, Tussauds' mentality was one of "if you can't beat 'em, join 'em"). While acquiring Thorpe did clear this particular roadblock for Tussauds in the short term, I believe it created them a rather different dilemma to grapple with in the long term; both Tussauds and Merlin seem to have had real trouble getting the two parks to coexist happily alongside one another.

Now given that both have operated alongside one another within Tussauds/Merlin for 23 years, that might seem like an odd thing to say. But what I mean is; whenever one park in the duo succeeds from a business perspective, it seems to have the unwanted side effect of sending the other into a downward spiral.

For evidence of what I mean, let me cite the UK Merlin park attendance graph shown during the Project Amazon consultation: 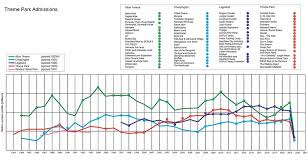 (For reference, Chessington is the blue line and Thorpe Park is the red line; if you want a clearer image of this graph, here's a link to another thread on TowersStreet: https://towersstreet.com/talk/threads/uk-merlin-park-guest-figures-through-the-years.5778/)

If we take a look at this graph between 1998 and the present day (well, 2020), I think it unveils some extremely interesting trends, and implies that a rather odd dynamic is at play among Merlin's southern RTPs.

For instance, the first period where Thorpe's attendance really skyrockets on the chart is 2001/2002... which is exactly where Chessington's attendance starts to sharply decline. By the Merlin buyout in 2007, both parks had gone in vastly opposite directions attendance-wise, with Chessington having dropped right down to 1 million flat (from a solid 1.5-2 million prior to this period and very close to 2 million in the late 90s) and Thorpe having skyrocketed to nearly 2 million (from slightly below 1 million prior to this period).

However, the tables began to turn in the late 2000s and early 2010s. Chessington's attendance began to steadily rise again during this period... while Thorpe's substantial growth began to level off and eventually turn back to decline. By 2019, Chessington was on an upward trajectory and had offset the losses of the 2000s entirely, reaching an attendance level of slightly above 1.5 million; this is roughly on par with 2000, the year prior to this cycle starting. Thorpe, on the other hand, was on a downward trajectory and had offset the bulk of what they gained during the 2000s; 2019 attendance was 1.5 million or a touch below, which is around on par with 2002, one of the very first years of the cycle. Chessington actually overtook Thorpe Park again in 2019, for the first time since the cycle began in 2001/2002.

I don't know about you, but I personally think that this shows that a vicious cycle is at play within Merlin's two London area Resort Theme Parks; whenever one park prospers, it seems to be at the expense of the other. While Thorpe initially prospered in the 2000s, Chessington really struggled. While Chessington prospered in the 2010s, Thorpe really struggled. The two parks seem to cannibalise each other's attendance to an extent, and I can't think of any other situation in the world quite like it (in the sphere of theme parks, at least).

So my question to you today is; can you think of any ways that Merlin could make this duo of parks coexist happily, and kick the cycle of attendance cannibalisation to the curb? Are there any other similarly situated groups of parks that have made it work? Why did this cycle begin in the first place?

I'll admit I'm struggling to think of things myself, so I'd be really intrigued to hear some of your thoughts.
Last edited: Nov 23, 2021

So the answer is probably to offer an annual pass just for the London area parks and market them together, since current offer is a Merlin annual pass covering all UK attractions, or a cheaper annual pass that offers the same attractions but with block out dates.

So unless you are getting out of London, or are really keen on the Eye or Shrek or whatever, it doesn’t offer value.

I daresay even for most Thoosies, having Chessington on that pass isn’t a motivator for buying it.

So a London park specific pass means people will go to each park at least once.

And to be honest I think the strategy of making one park JUST for thrillseekers and one JUST for families isn’t a good one because it means people stick to one and pay once.

Whereas if both parks had a balanced lineup, you’d feel compelled to visit both because of fear of missing out, which is perhaps how DL/DCA Work, or IOA/USF work.

Like if Thorpe didn’t have the Swarm for example, it wouldn’t really feel like the park was ‘lacking’ something, it already had a pretty substantial thrill lineup

but if Chessington had that investment, and 1 or 2 rides of that scale, it raises the profile of the park.

Having an overly stratified market polarises guests in a way. If you are adult you'd feel like a pedo at Chessington, and Thorpe would feel a bit unplesant for families, with hordes of teens and quite basic family rides.
Last edited: Nov 24, 2021
Y

I think it's important to remember that correlation does not imply causation.

I'm not convinced that the fortunes of Thorpe and and Chessington are that dependent on each other.

The opening of Legoland in 97 (and the parks responses to it) seem to be a much more important factor.

Chessington's gradual decline starts around the time Legoland opens and a general lack of investment sees that decline go on for a decade. The park then seems to refocus itself on the zoo aspect of the park with investment in animal and animal themed attractions leading to it's gradual recovery.

Thorpe rebrands itself as a teen/thrill park and with continuous investments goes from strength to strength to a peak in 2010. The parks decline from there is matched by Alton Towers possibly suggesting a general drop in interest in thrill parks. The 2012 Olympics may also have had an effect as there is a significant drop that year, whilst the Smiler incident and a general lack of investment* in the park has seen Thorpe continue to decline.

Alton Towers decline from 2010 - 2016 was much more dramatic than Thorpe's but subsequent investment has turned that decline around.

The only real link i can see would be if the investment Thorpe received in the 00s was directly responsible for the lack of investment at Chessington and vice versa for the last decade's underinvestment at Thorpe. However it seems more that the money that has been spend at Thorpe has just not been well spent.


* and the complete failure of DBGT

I'm thinking park hopper tickets and MONORAIL between the two.

Or a cable car

Mack always have spares, never willing to hand them to Merlin tho oh lord

I called dibs on being the pilot!
H

Is there a chance the track could bend?