Hop, Skip and Jump to Walibi.

After working out that my current coaster count was at 96 and my 100th coaster would very likely be a wacky worm in New Brighton this Saturday ( 06/07 ) it seemed like a good idea to find some "slightly" better creds to ride this week. As a result i decided to make spontaneous trip out to Holland and make my first visit to Walbi Holland, along with my first experience of the madness that is RMC.

After trading a few messages with @Howie on Monday morning we ended up planning to meet up the following morning in Amsterdam airport.

Spent few minutes looking into different travel options available to me and ended up with driving option via the channel tunnel, simply because it came out as the cheapest option by a fair way. Train and expected fuel cost came in at a combined cost £150, compared to the flight option avaiable which were in the region of £250+ for just the flights without taken into account the faff and expense of getting to and from airport each side.

So on with report.

I got 3.30am Train out of Folkstone on Tuesday and drove up to Amsterdam and picked up Howie and traveled on to Walbi. Driving into the car park it looked like the park would be fairly quite, defiantly considering Europe first and currently only RMC I Box coaster had just been opened to public for less than 24 hours.

Once parked up and we made our way to the entrance it was just before 1pm and cred anxiety was kicking in, the temptation to run straight to Untamed was difficult to resist but with it being at the back of the park probably helped somewhat.

So on with first ride of the day, Xpress: Platform 13
Queue line and station seemed well themed, launch was fairly forceful and first couple of elements were enjoyable. However after the first few elements the coaster seemed to slow down and just meander around the rest of the circuit twisting in and out of it self before returning to station. It an ok coaster but guessing the Disney version in the dark is probably a lot more enjoyable.

As we were still at front of the park, we decided to head to Speed of Sound
As far as boomerang goes it seemed one of the better ones with good looking station and on board audio. Ride going forward seemed fairly smooth and ride backward wasn't to bad although had noticeable jolt.
Overall a lot better experience than boomerang i did at PWH CF Live last month.
You can understand why shuttle coasters are fairly popular option for most parks. They offer thrills on fairly small budget, they don't take up much space and look fairly impressive from eye level.

Moving on, we decided to do Drako , the Kiddie Cred of the park.
Simply because, A it was the nearest coaster and B it was likely to be walk on and it was.
It is OK for what it is, first drop and drop into station actually felt fairly fast at the back of the train to be fair.

Next up my 100th Coaster and the main event. "Untamed" 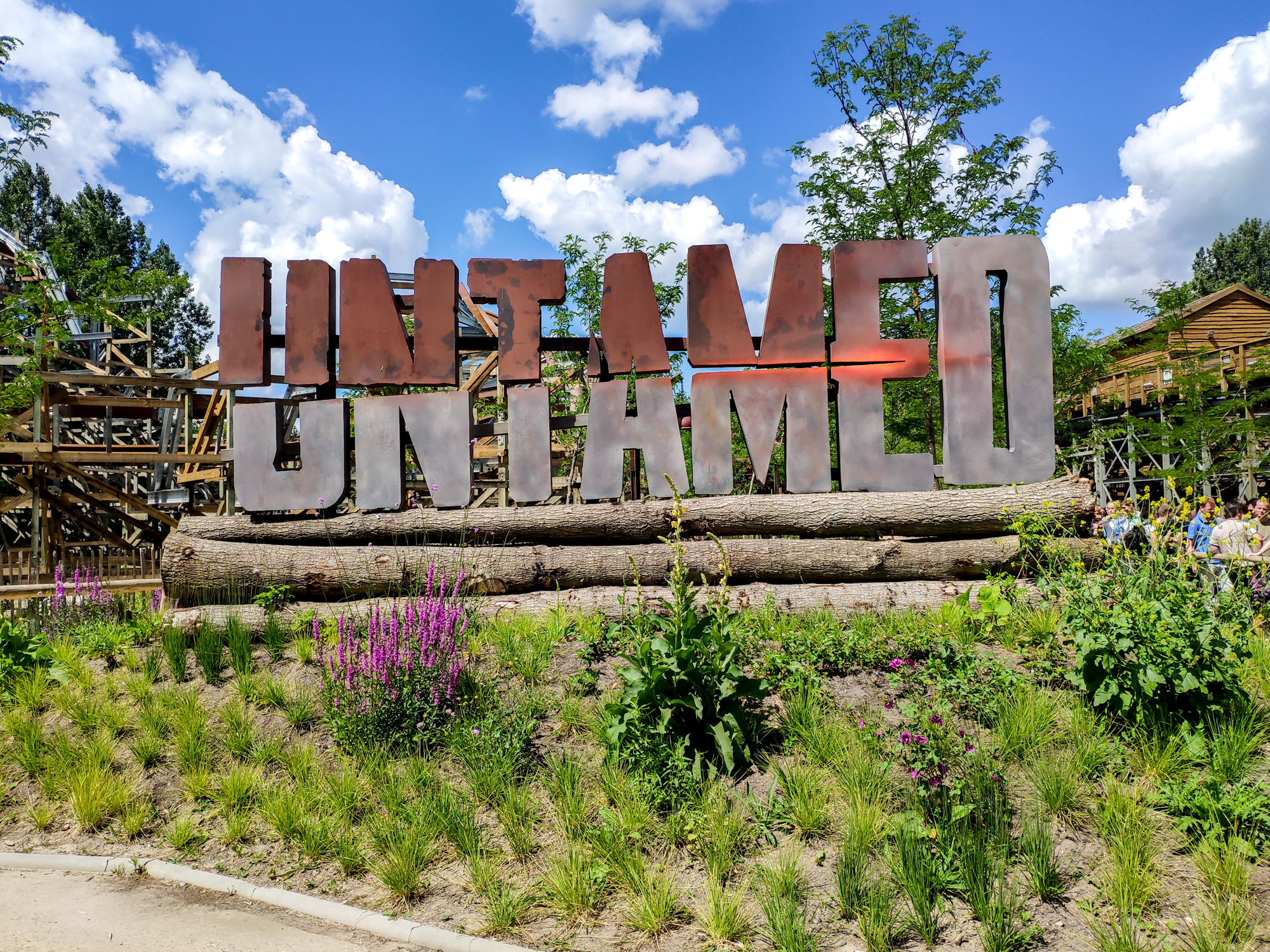 Naturally it had the biggest line in the park and because neither us had eaten much at this stage we decided to have some lunch before joining the line. Just around the corner from Untamed is a Chicken place, food was good and price was reasonable price to be fair. Came in at about 10 Euros for Chicken Wrap, Chips, Some Salad and a Bottle of Beer. Neither of us left anything which was a good sign ? or we were both just poorly fed travellers!

It was approx 2.15pm when joined the queue and it seemed to be moving fairly smoothly. The main queue line gives you opportunity to look at the entire circuit, especially the second half as it come back round to the station.

Pictures in order you view them from queue line. 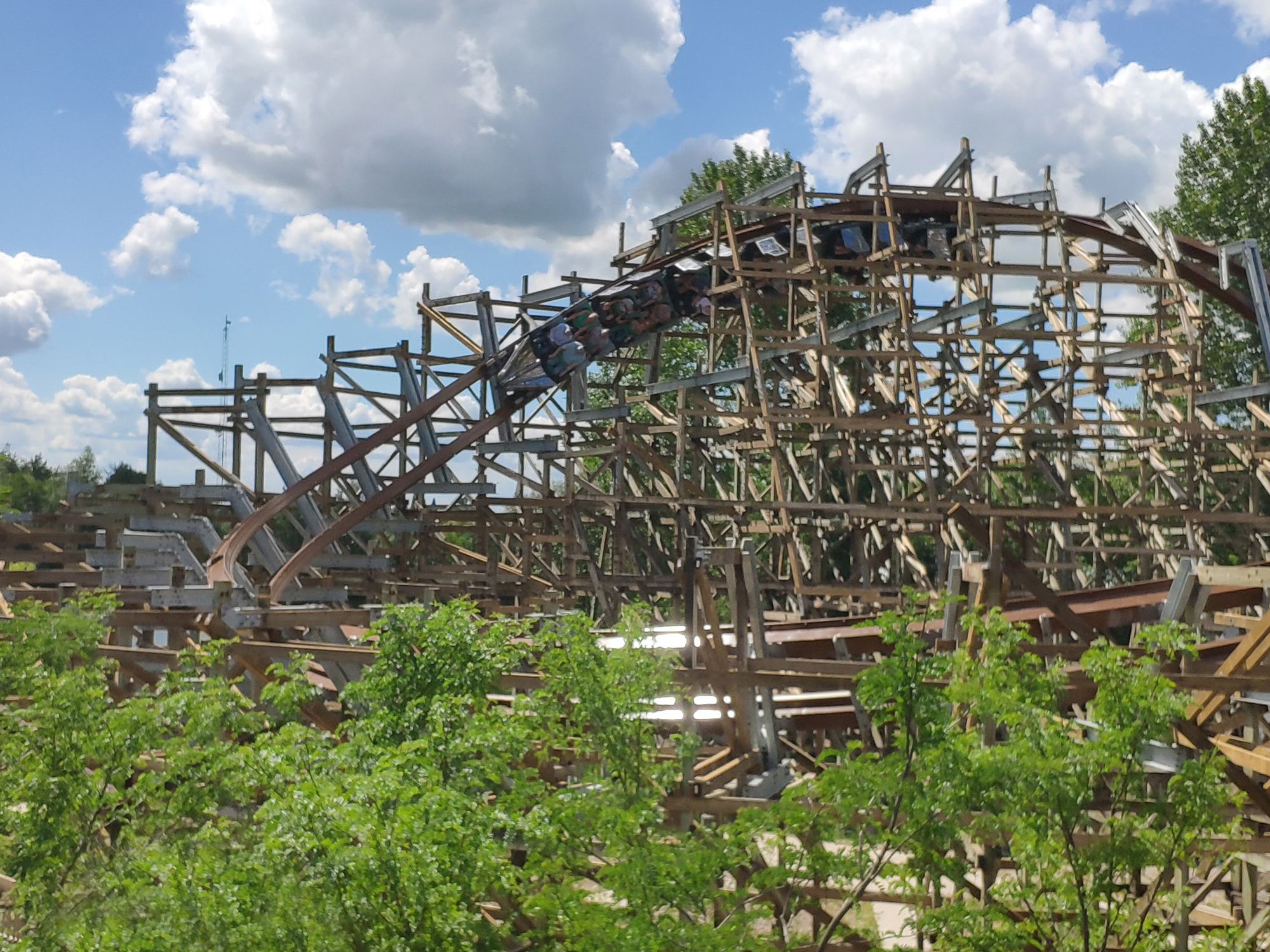 Inversion going into the turn around. 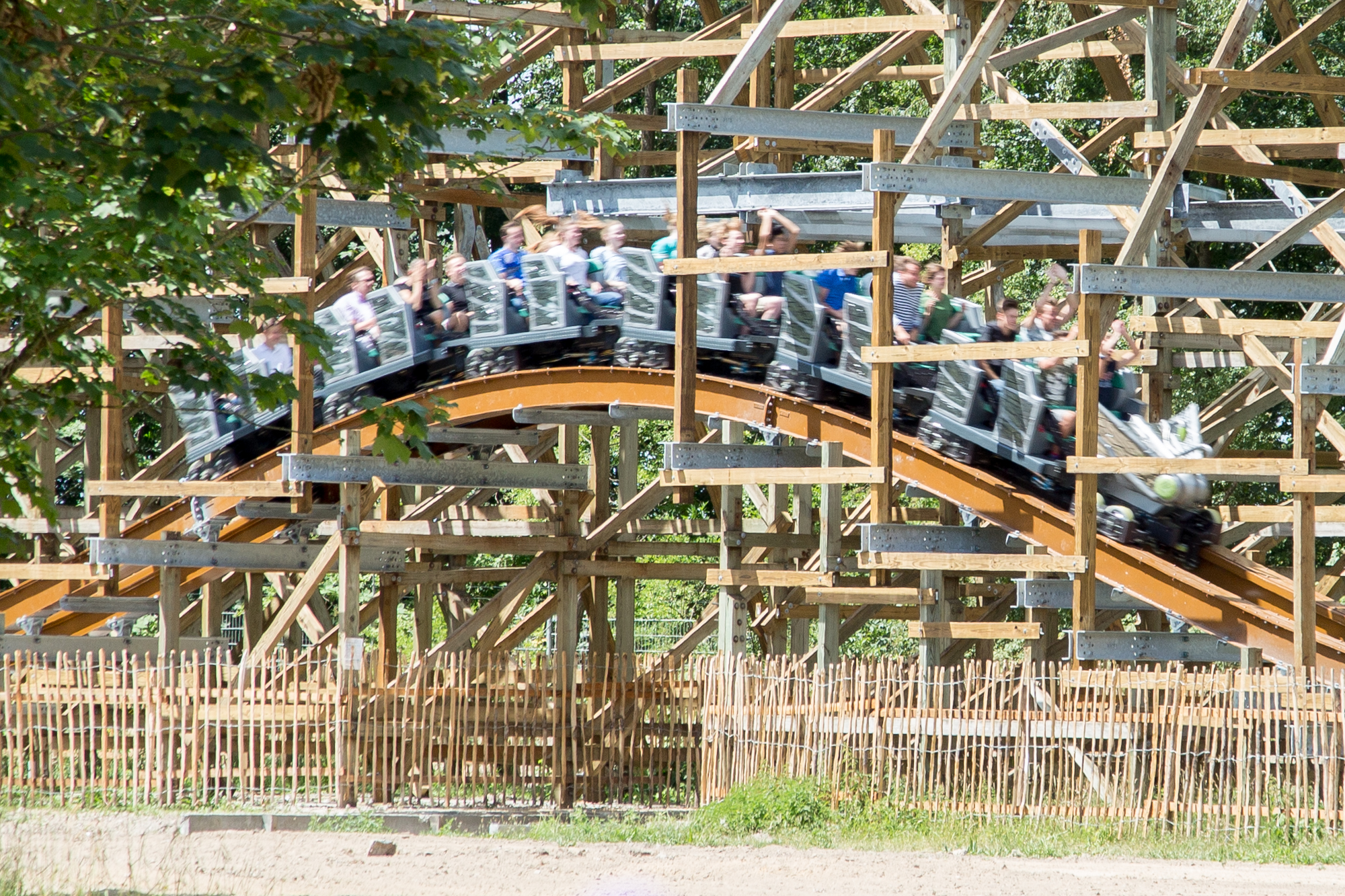 Bunny Hops towards the far end. 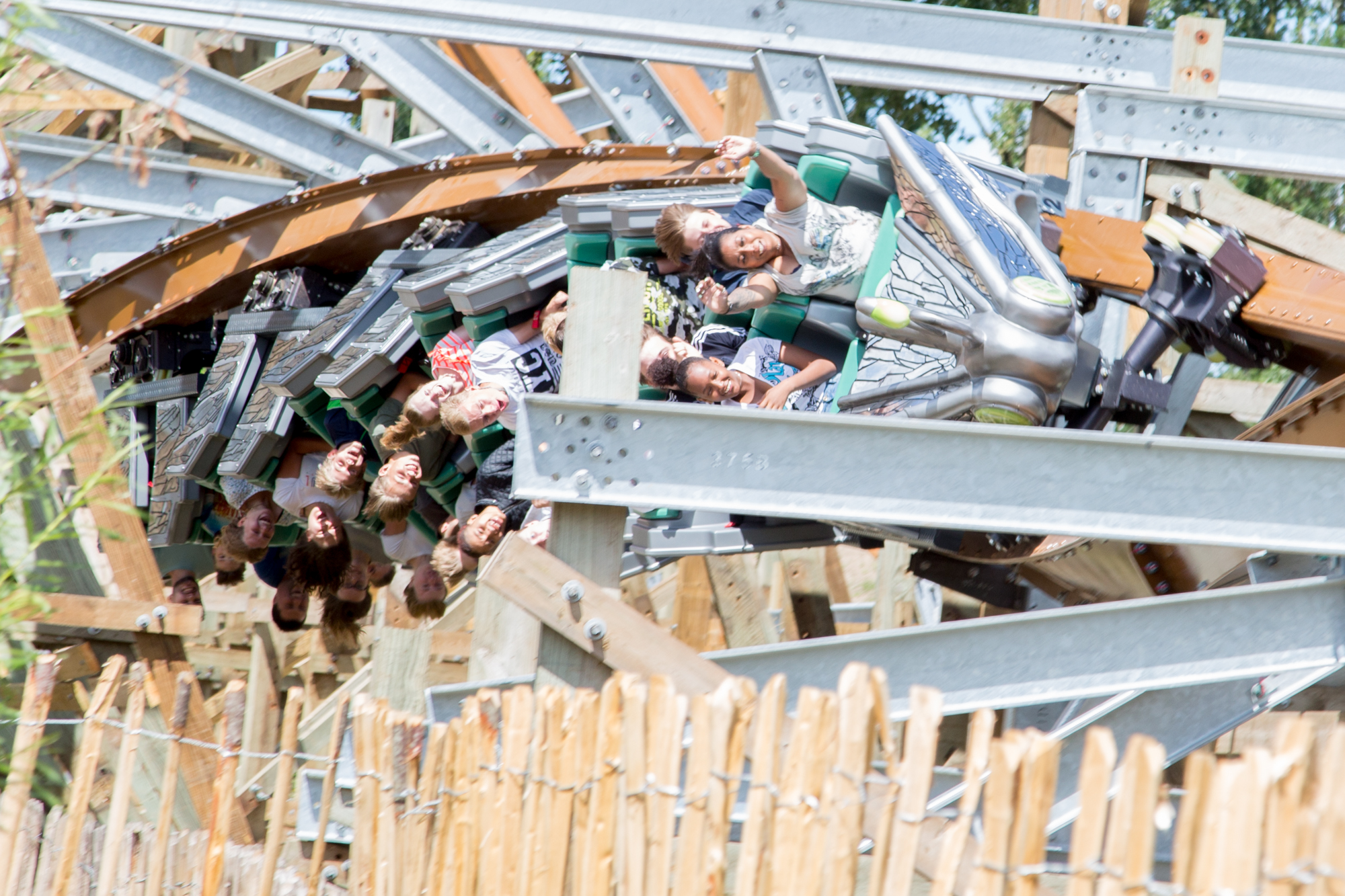 Coming out the last inversion into the station ( Dam you spiteful Support! ) 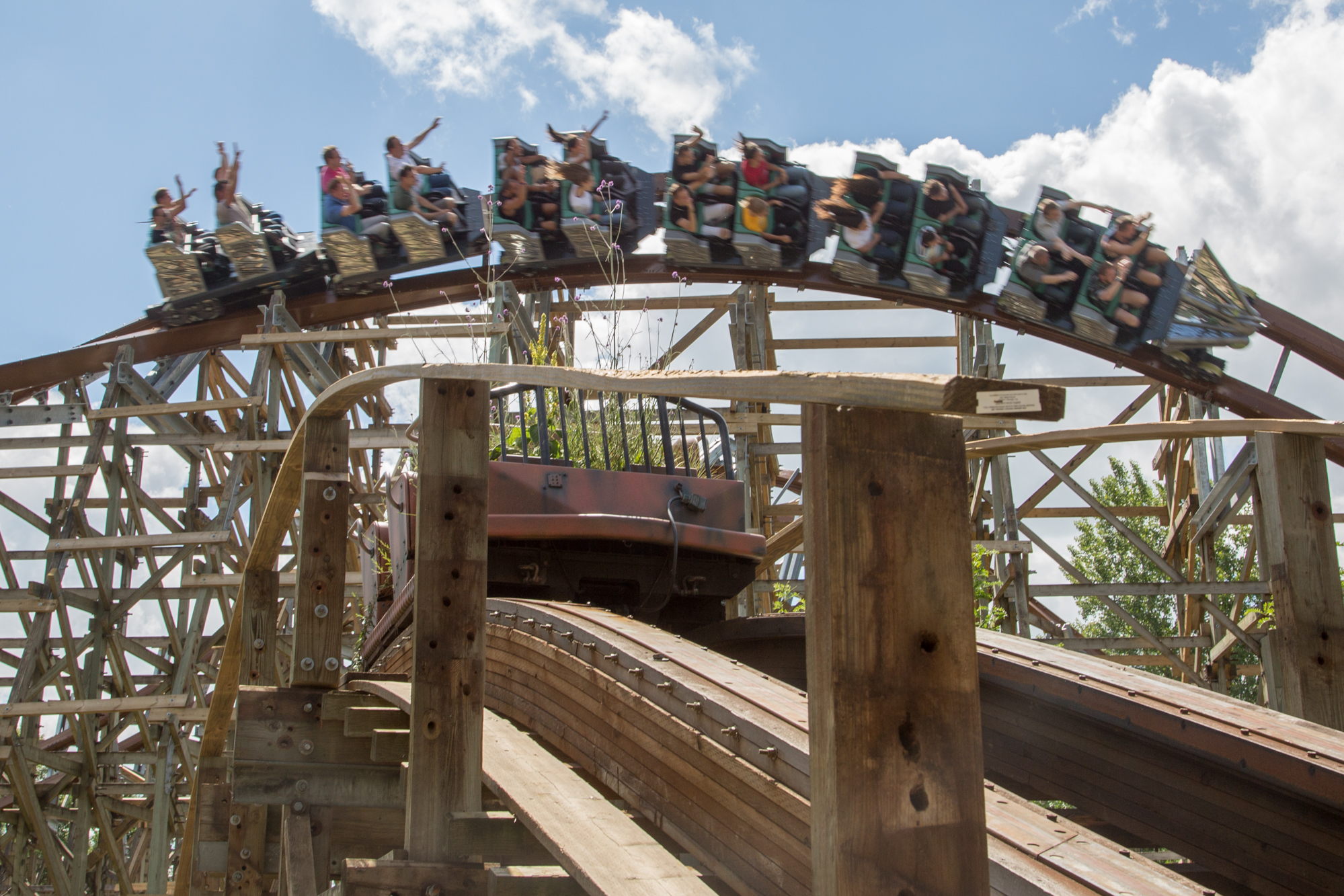 Fly Pass of Old vs New trains / coasters, it was cool thing to see it. 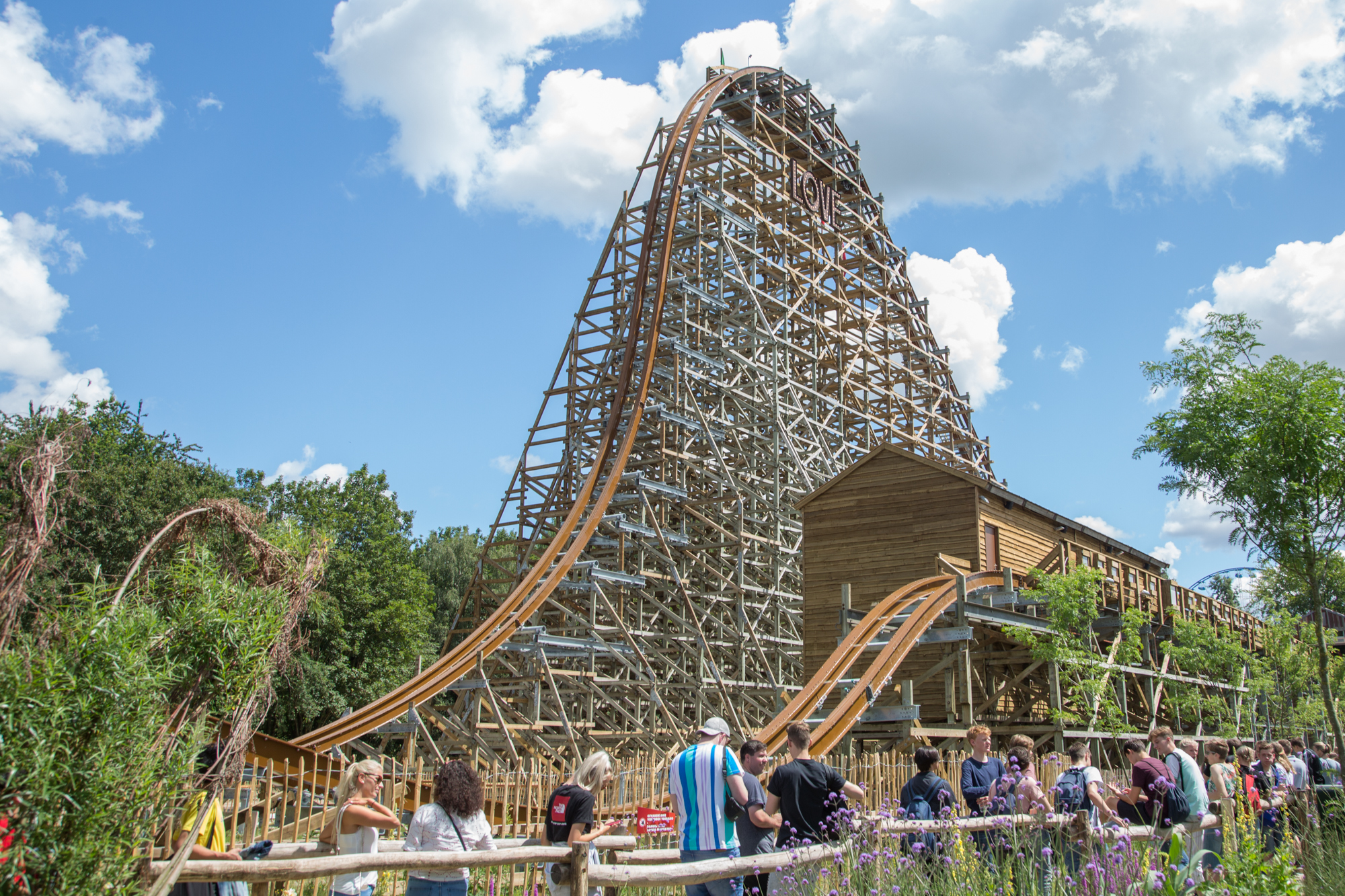 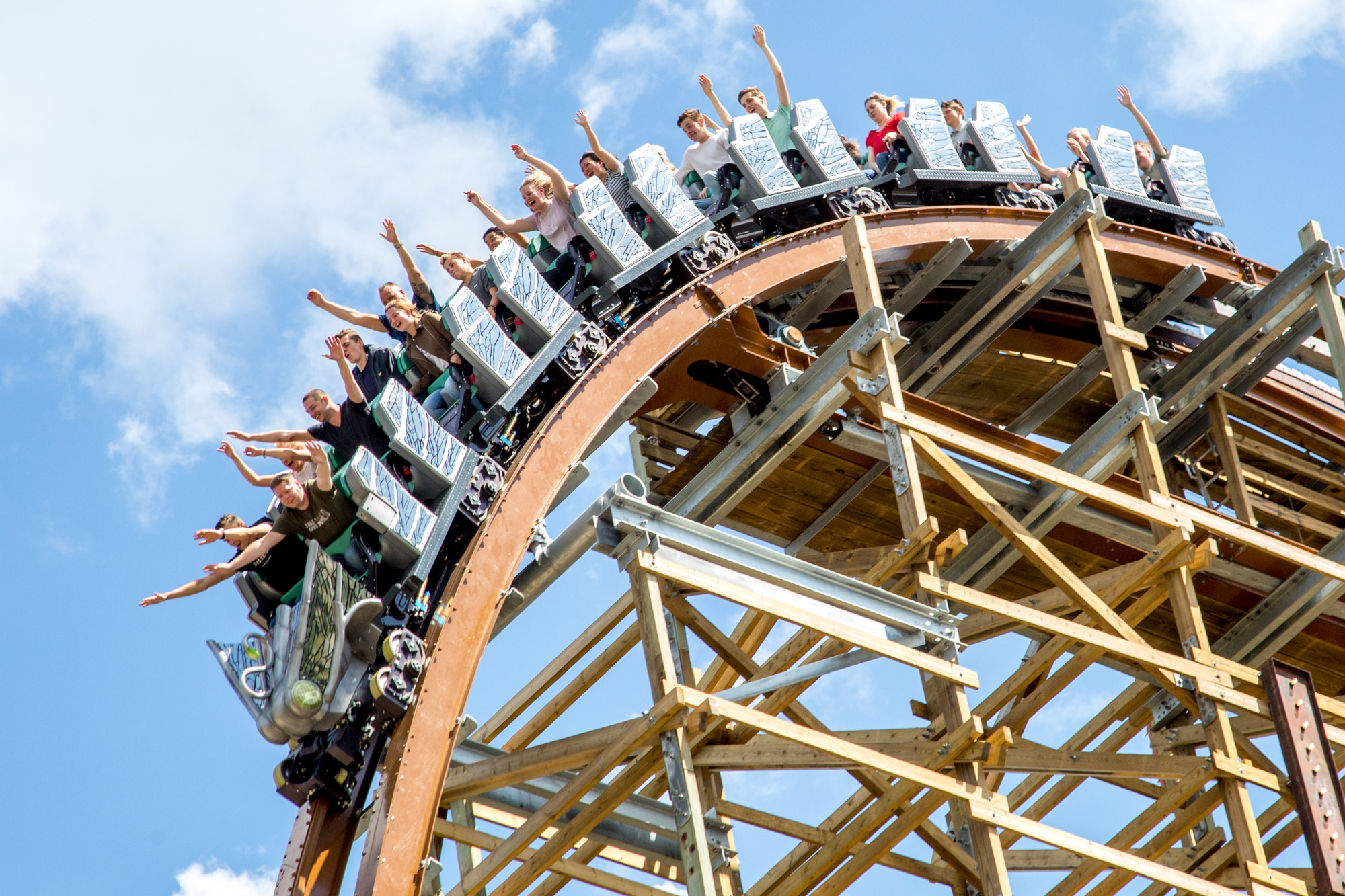 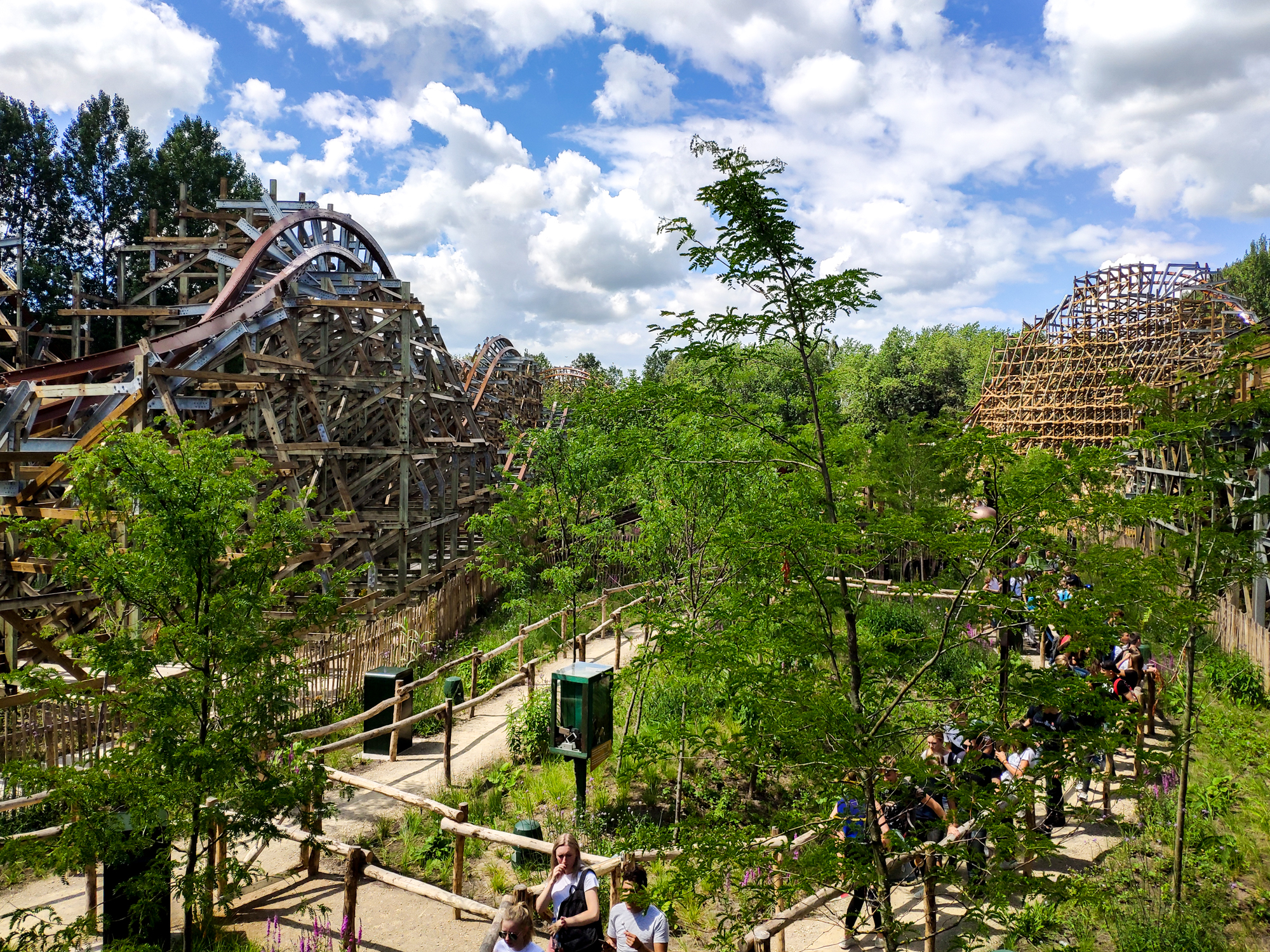 Lastly the view at the top of stairs as you enter the station.

The wait was approx 30 to 40 minutes, which seemed fairly reasonable for coaster of this statue.

As for the actual ride, my first reaction to it was " Oh My God! ", dam the coaster kicks some serious ass.
Excluding the fairly slow lift hill the circuit is relentless and you spend the entire ride being ejected out of you seat.

Golaith is a fab coaster, the fact that the actual coaster is so open and exposed makes the rides that much more forcefully. Good mixture of airtime and speed through out the circuit easily the second best coaster on the park. 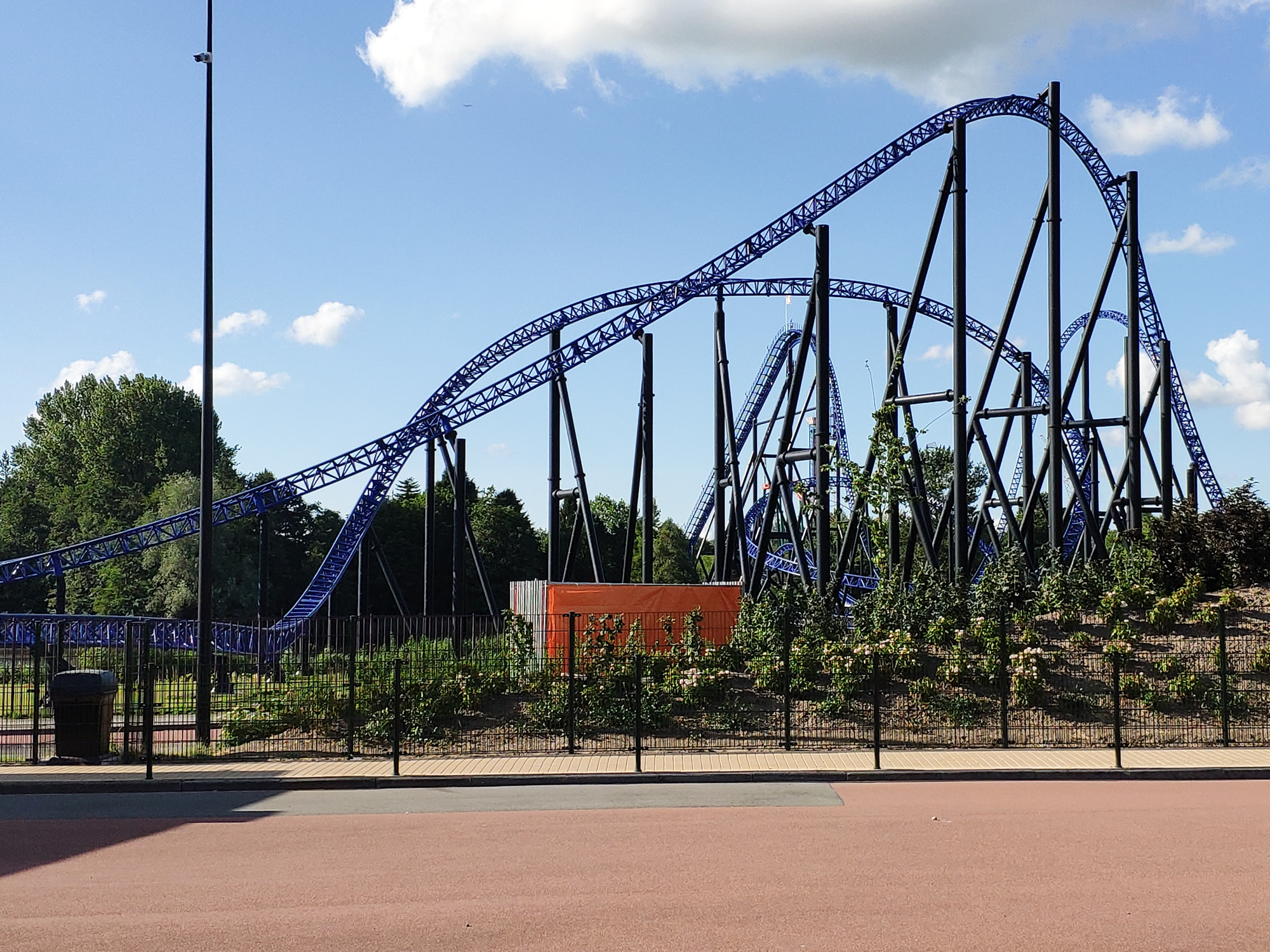 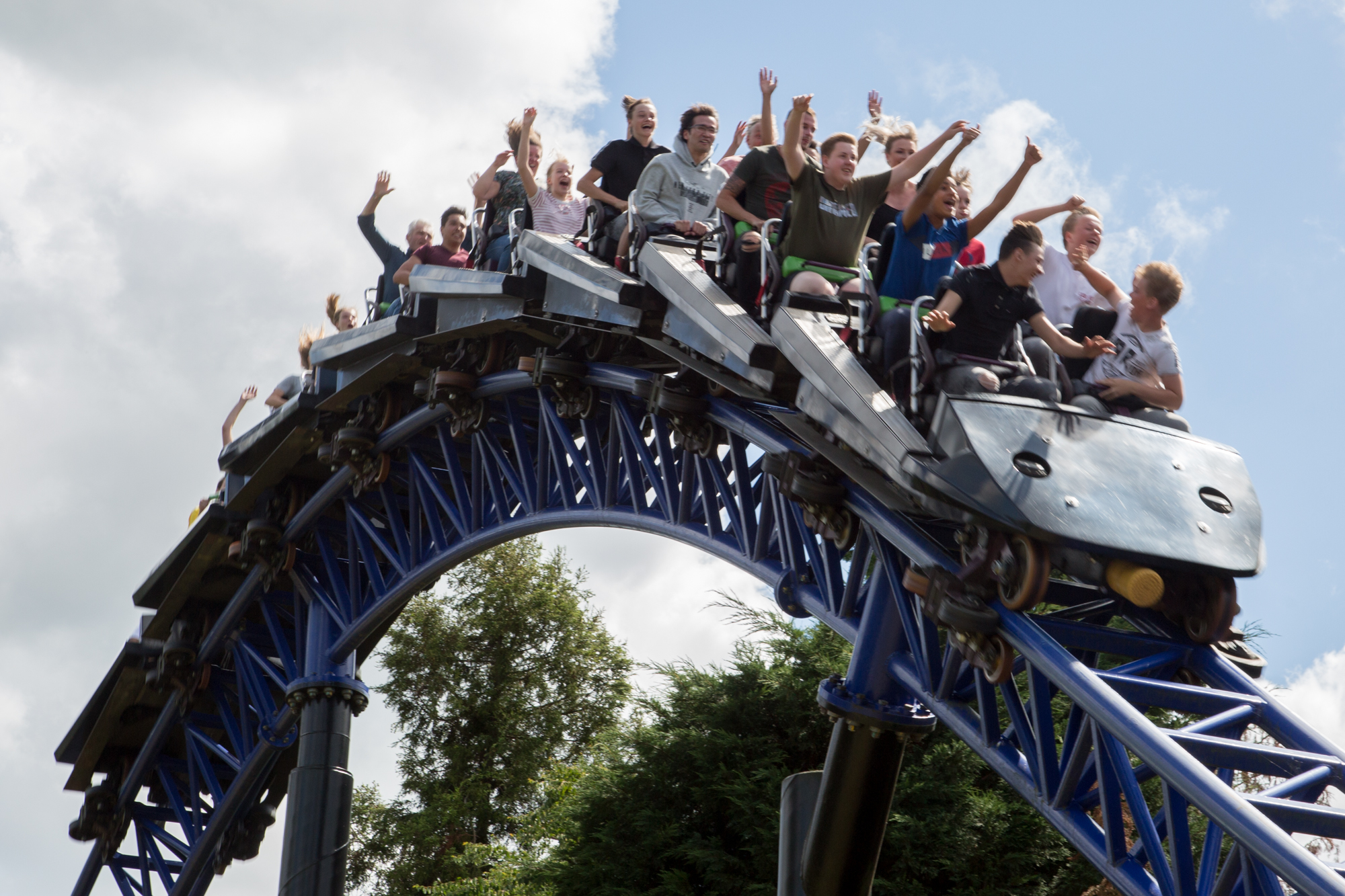 On our way back to Untamed we somewhat struck Gold, literally.

We were approached randomly by a couple of guests who were on their way out of the park and they wanted to give us their gold tier fast track passes to use for the rest of the day. It seemed a very unusual offer but we very gratefully and were happy to accept.

So instead of getting 1 or 2 goes on Untamed on the day and expecting the need to come back the following day for some re-rides we ended up whoring it for good 40 - 45 minutes and in that time having a good 4 / 5 laps on in it.

The time we had to wait for the Fast track QR code was frankly embarrassing, think it peaked at a massive 2 and half minutes before we could go back down fast lane, scan the fast pass qr code and walk onto station and into the air gates.

With Untamed well and truly ridden, we headed off and mopped up the last couple creds i needed, Lost Gravity and El Condor.

Former being the first Mack Big Dipper, it a enjoyable ride and very fluid circuit. Although floorless seats on the edge give so much better experience.

As for the later, what an utter piece of poo. I would rather marathon Infusion for hours than sit on this for just 1 ride!
i will gladly volunteer to be " Bag Lady " at CF Live in September if anyone wants to go on it 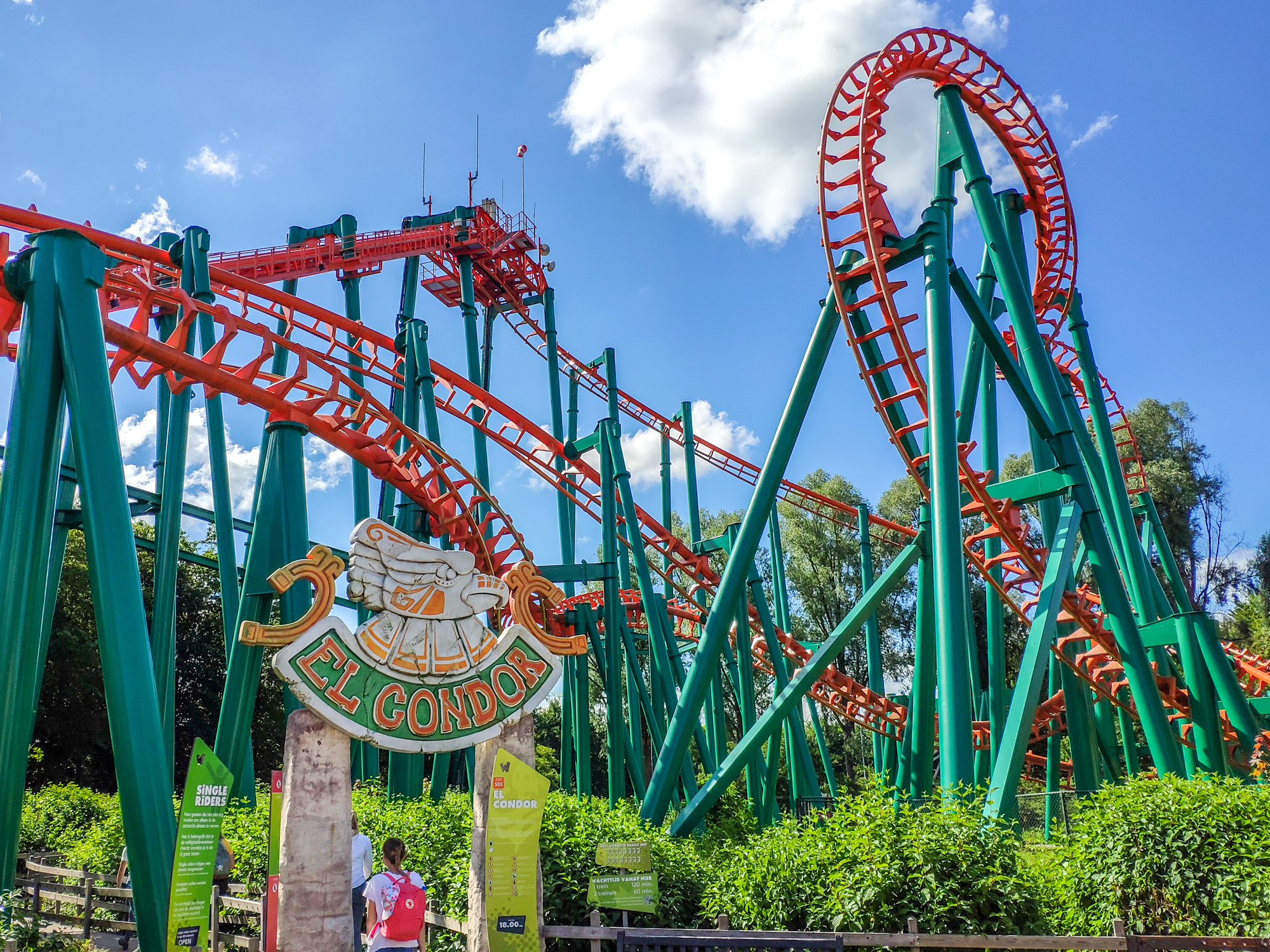 We finished the day off with another go on Untamed and couple more goes on Golaith.

Ride of the Day: Untamed, Pretty sure it my new Number 1, however i have yet to do taron at night.

IF i had to criticise anything about untamed it would be the restraints. I got stapled on a couple of laps, which kills your thighs. However it was probably more due to my size than actually restraints issues.

Final conclusion of the park

The demographic of the park was pretty much 100% spotty teenagers as a result it felt rather strange and was fairly easy to spot the enthusiasts in the park.

The park layout is frankly a bit odd as well, with Golaith and El Condor both being next to each other however both are down fairly lengthy dead ends, can't be that hard to build a path between the two surely ?

Actually ride line up ain't to bad and for the cost of entrance it seems fair value to be honest.

On the grounds we done everything we wanted to do on Day 1, it left us extra day to visit somewhere else.

We decided on Toverland for a few of reasons

1. Howie needed the Fenix Cred, only seem fair when he went on everything at Walbi for my sake.
2. Neither us seemed that fussed about doing +1 / +2 dotted around Holland.
3. It meant i knocked out some of the drive home earlier on in the day and didn't leave it all to the evening.

I won't write a full report on the grounds i only visited the place just a month ago but will say a couple of things.

> It was good to get back on Fenix and Troy. Both pack a punch for the type of coasters they are respectfully.
> It was good to get on Blizt Bahn, the powered bobsleigh ride, after i totally overlooked it last month. Queue line was well theme, ride seemed fairly fast and Chicken shed was frankly odd and i like it.
> It was cool to randomly bump into and meet fellow CF'er ( @Will )

Ended day with a lap on troy before heading home. The park closed at 5pm, Dropped Howie off in Eindhoven station around 6 and walked through the door just after midnight.
Probably could done it quicker if booked earlier train home but i didn't know what the plans were at time of booking, plus M20 is just littered with average speed cameras and random night closures at moment.

Lastly just like to say thank @Howie for good couple of days away. It make big difference socially as well financially when you compare traveling solo and with other people.