HeartlineCoaster said:
In the last few years I've spent a ridiculous amount of time sandboxing on RCT2, or its open source equivalent, so it definitely gets my vote.
It's amazing that it is still growing as a game after all this time and there are some wonderful things you can do with it now.
To me it's the perfect place to throw any creativity I've got in at a reasonable pace, due to how much I've gotten used to the system and how relatively easy it is to make things.
I play it almost theraputically, like some people and their adult colouring books. It's an art form and a great way to relax just knocking out dream theme parks.
Click to expand...

HeartlineCoaster said:
Location = Korea
Theme = K-Pop
All rides are based on a music video or song with theming ranging from slight to intense.
Concerts are held regularly.

That makes 24, but with long opening hours and excellent operations you can do them all in a day. I'd recommend a week though.

I'm liking it what I see here! Just wondering, since I haven't used any open source stuff, what is the difference?

Also, how long did this take to build?

It's all just updated for convenience really. Lots of minor stuff that doesn't sound like much, but adds up to a more friendly gameplay in the long haul.

Most of the old hacks from things like 8cars and parkdat come built in, such as the ability to mix and match tracks and trains or add lift hills and launches of any slope or speed.
You can add and remove rides and scenery objects to what's available in your scenario on the fly, so you don't have to have all that planned out from day 1.

Biggest gamechanger for me was being able to disable breakdowns. Once you hack stuff it breaks down 90% of the time and that got pretty unbearable when you like to see everything functioning properly.

This park however, began in the original game and was only migrated to the open version near the very end. This was phase 1 of my modern experimentation in the game. Phase 2 is also complete and phase 3 is currently underway.


Sandman said:
Also, how long did this take to build?
Click to expand...

Honourable mention to the cut-away view, for when you cant look round corners on your flat screen or isometric messes with your head.

Also handy at making a little animation to show the dark rides are built with actual scenes.

That was quite fun, lets do a few more.

Staff member
Administrator
Moderator
Really nice park! Hope you make more like it one day! Those skills could also be put to good use in Parkitect, if you want to try it one day!


Sandman said:
I'm liking it what I see here! Just wondering, since I haven't used any open source stuff, what is the difference?
Click to expand...

In addition to what was already said, OpenRCT2 has unlocked the "launched start" and "reverse-incline start" options for almost all coasters, so you can make pretty much any coaster a shuttle coaster. It also has boost sections that work like brakes in reverse, letting you create launched coasters of most types too. And it has a day/night cycle, a cheats menu, and guest AI updates. All in all, it fixes the little flaws RCT2 has had since it came out, and they're still updating it. They are seeking to get past the object count and ride count limits too, but as far as I'm aware that's still a bit into the future.

Good shout on the launch thing, there's been a recent breakthrough for me on this since they finally increased the acceleration of that booster piece.
Chain lifts were used for all launches before, meaning you couldn't mix a regular lift hill with a rolling launch, or even have launches aiming for different top speeds as the lift speed is set in the ride window.

Still serves its purpose as an uphill launch.

The booster piece was very weak originally so didn't give enough punch to be effective for some rides. Now it hauls arse and the advantage over chain is that the speed is set on the individual track piece, meaning there's even more fun to be had now. 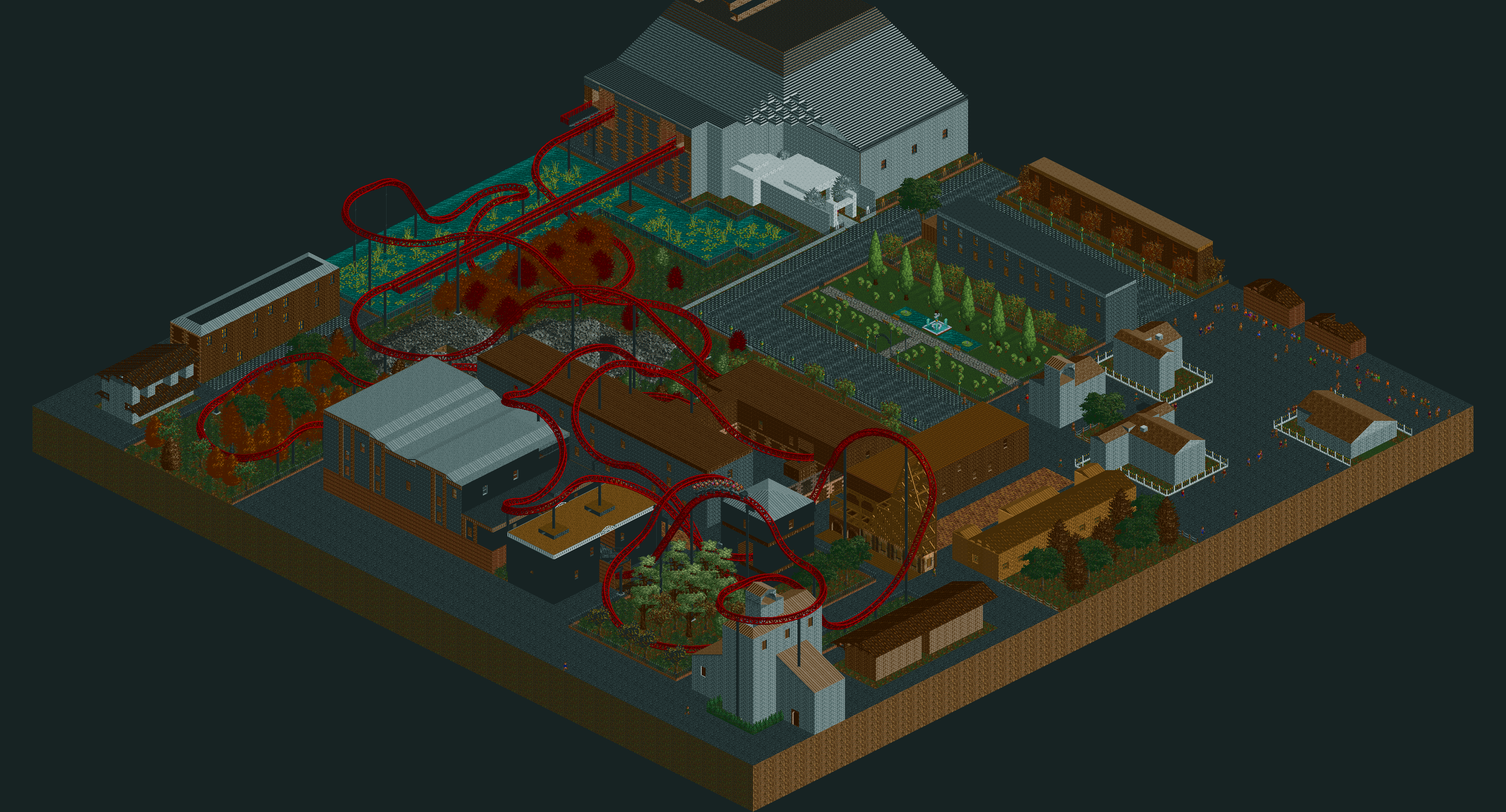 Here's the aforementioned phase 2. Company that runs the first park expanded into the Japanese market.

Location = Japan
Theme = J-Pop
All rides are based on a music video or song with theming ranging from slight to intense.
Concerts are held regularly.

That makes 17, but with long opening hours and excellent operations you can do them all in a day. I'd recommend a week though.

Location = China(?) - It was originally going to be more Chinese based, a bit of C-Pop but there wasn't enough to work with. The band with the biggest section of rides also has (had) a lot of Chinese influence with several members and a secondary agency, but that all went f*ck up for them this year.
Still, be good to break into the market. Got a better chance than Mr Lotte now.
Theme = K-Pop
All rides are based on a music video or song with theming ranging from slight to intense.

Staff member
Administrator
Moderator
Another really nice park! And is that an Ocean Rapids ride I see at the bottom there?

Also... what is that thing jutting out of the water just northeast of the rapids? It looks like a terrain glitch, but is too fine-detailed to be actual terrain. How on Earth did you make that?

Pokemaniac said:
is that an Ocean Rapids ride
Click to expand...

'Ocean' in that it pretends to be trackless and take you out across the harbour first, before doing the ride portion.

Pokemaniac said:
what is that thing jutting out of the water
Click to expand...

Just a crude rock formation thing. It's made up of custom scenery pieces that are land blocks/surfaces cut up.
It means you can actually have land sticking over rides now - tunnels and archways, but I find it quite hard to implement effectively so far. Something else to explore in phase 4.

A little late to the party, I just got around to installing Open RCT2. Have you uploaded any of your parks anywhere? I don't really have time to play the game much anymore but I'd love to mess around with prebuilt parks.

^I haven't. What type of stuff do you want to mess around with?

I don't know, I'd love to see how this park runs

Sent you a link to try in PM.
Top tip: as soon as you get in, go the spade top left for the Cheats menu. Tick Disable All Breakdowns then click Fix All Rides.
Everything slightly unusual just stops working otherwise.
If you don't have the Cheats menu yet. Go to the save button>options>cogs>Show toolbar buttons for: Cheats.

Sweet, just got on my desktop, I'll try and get it going. 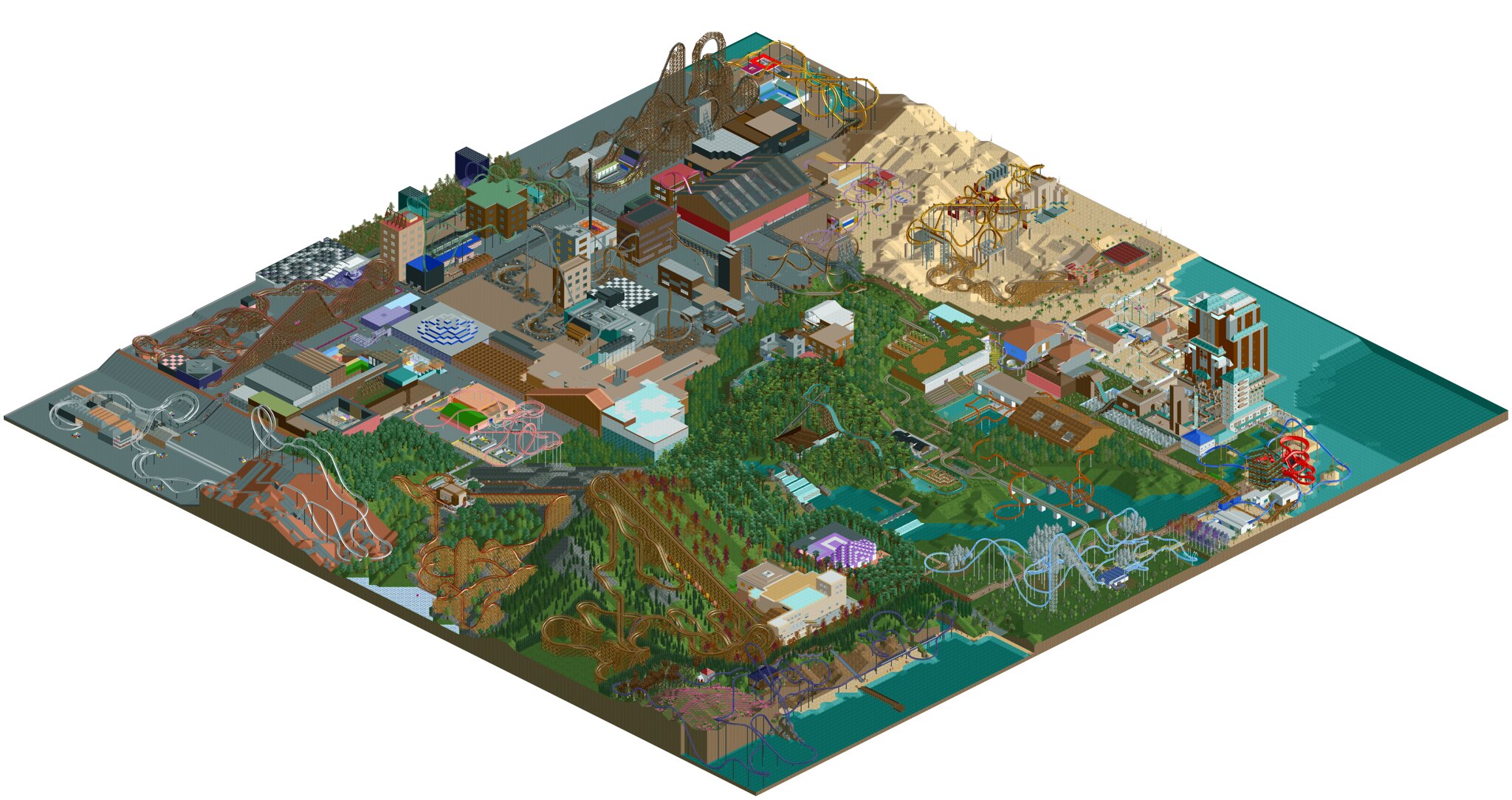 More than 1 year later, phase 4 has arrived. My most time consuming park to date. I had grand visions of a fully fledged city as one half of the park to contrast the prettier half and act as a two-gate resort, but buildings are an arse to make and scale with everything else going on, it's not my strong point and I'd rather just spend that time creating actual rides.

As usual, the theme = K-Pop
All rides are based on a music video or song with theming ranging from slight to intense.

Other:
A train! with storytelling aspects.
Hologram show

Experimental things going on this time:
- Stall-type inversions are now a thing in the form of sequential sections of purely upside down track by hybridising twister and flyer track. The trains draw a bit buggy, but the sentiment is nice. So the RMC hybrid has a sustained inversted straight into a dive loop for instance.
- And the Gerst Infinity has a Finnish loop and Mystic-esque inverted spikes, shuttle sequence and Hangtime-esque holding brake.
- Tower of Terror you say? Yes it has the actual elevator vehicle from the game (so it's a stand-up, hardcore), running on mostly vertical coaster track, powered up and down, holding brakes, with a bit of forward and backward dimension as well (Florida ones do that anyway right?) Two lifts running in parallel, they peep through a couple of glass windows too.
- The water park tube thing has shuttle elements, unloads in pure water and rafts get vertically elevated empty back to the top.
- Trackless dark ride has crossing points in a mass frenzy of spinning cars, including a Tokyo Hunny Hunt-esque decoy car on its own path.
- Rapids again has elevator lift and tubey section, there's an intiated spin before a steep drop - like that one on California Adventure's, but that's easy to do.
- The log flume doesn't run at 2mph on the flat and 0mph on lifts like the old days, it moves with speed and purpose throughout its layout. It's actually worth building them again now.
- The boat dark ride has moments of acceleration, a coaster drop and a tubey section (is it a cred?). Again it doesn't take a month to clear a lift hill, it hauls when it needs to.
- The Mack Inverted Powered and Ghost Train are downloadable ride types that have a programmable rotational angle based on the 4D train concept, this means you can point them in whatever direction you fancy based on your dark ride scenes. No credit to me there for innovation, but it's fun to implement.

Already sketching the next...

Slow progress on phase 5 while I've been focusing on other stuff but I've been thinking about going back to these previous parks and showing them off in a bit more detail. This led me onto the idea of doing video footage of the rides in action (POV style but, obviously, from above) and I've hit a bit of a conundrum - what sound would I put in the videos?

a) Silence - doesn't bother me personally but it might seem a bit weird to some. Still displays the full hustle and bustle of a park full of guests and things running how they should
b) In game sound - annoying guest screams are annoying but as above it displays a lively park as fully intended
c) Rip the people out, run rides empty with just the in game coaster noise - no more screams but no atmosphere either
d) Arbritrary unlicensed music - not sure I can bring myself to do this, particularly if I end up with 50+ short vids, it won't tie in
e) Licensed music (the actual inspiration) - again not sure I'm comfortable with that, feels like going halfway towards how I'd have it made in real life but then I'd want to take it a step further and have custom sound and it's just not achievable
f) Something else