So use this topic to catch up on Ben's latest plans on getting inside Button's pants, Neal giving countless excuses for Schumacher's poor performance, Marc claiming any breath taken by Ferrari is illegal, Martyn saying Le Mans is better, Furie bemoaning a lack of overtaking, Jerry being baffled that there's the occasional right-hand turn, Ian tweeting about badly-placed drain covers, oh AND Will's deep-rooted mental obsession with all things Force India.
M

Was just about to start this

Well so far the new Merc is stunning to look at, the Renault is a close 2nd.

Still a few more cars to be revealed but so far so good and a lot of different takes on the rear ends.

Strange that RBR have gone for a tidy up of the car rather than anything new, maybe they can be over taken this year. Always hard to tell as the new parts are not normally put on cars until the final test.

Mclaren should be shown Thursday.
B

marc said:
Still a few more cars to be revealed but so far so good and a lot of different takes on the rear ends.
Click to expand...

The Merc is really, really beautiful tbh. Renault are gay, so their car is also gay.

Can't wait to see the Fabclaren <3

Im still pissed that Vettel won the championship. I expect this to last until he is categorically beaten numerous times over the season and is finally stripped of his undeserving #1 on the front of his car.

Why is Renault flying the Lotus badge when its a different lotus group to the racing spec group? I'm lost Heavy looking car though!

Staff member
Administrator
I like the look of the RB7. The new front design looks wicked & it's got a neat rear end, but would have liked to see the diffuser. Hopefully they'll have the KERS system up to par with the others, if just for performance off the line.
I still feel Vettel & Webber will be the team to beat. I just hope that Webber doesn't fall apart at the final stretch like he did last season.

Great post to start the topic Neal & I enjoyed the joke, but just for the record: I HATE NASCAR!

Screaming Coasters said:
Why is Renault flying the Lotus badge when its a different lotus group to the racing spec group? I'm lost Heavy looking car though!
Click to expand...

Because Renault is now Lotus Renault and is owned by the actual Lotus company.

Lotus Racing aren't anything to do with the actualy Lotus company.

It's quite confusing, but who cares? Lotus = <3 although slightly more lovage towards Lotus Racing

furie said:
I'll bet it's as boring as last year
Click to expand...

Haha, we can hope so - it'd mean we're in for another bloody good one
I get the impression you can't actually learn much from testing times, but I'm still suitably happy with how Di Resta and Hulkenberg got on on Tuesday, with Sutil back in the old car today and the VJM04 being unveiled next week

And speaking of new cars, the new Ferrari shows promise 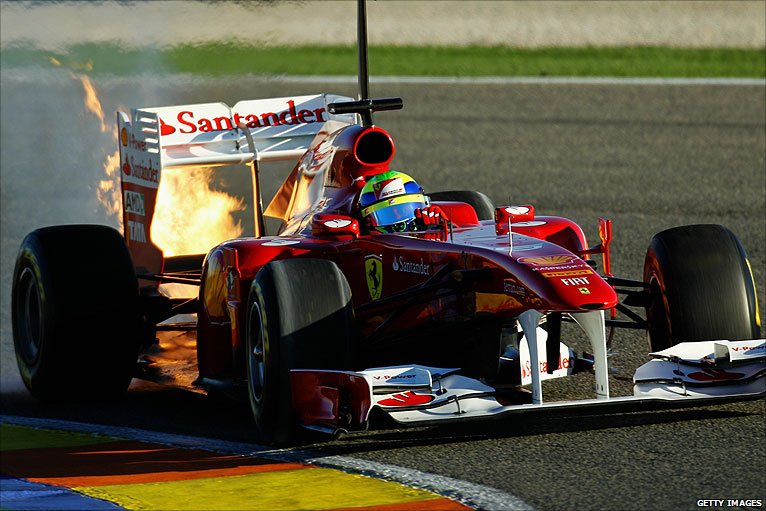 One of the best opening posts ever, incidentally
M

For me neither are the real Lotus anyway, but Lotus should always be a constructor and not just pay for a car so this Renault one with there silly black and gold can go away. They even got Bruno on board to make it look better, it is totally fake and real fans are not one bit impressed.

Di Resta is a bloody good driver, he beat Vettel when they were team mates.

The new Mclaren is stunning in a strange way and is totally different to anything I have ever seen. Unlike with most other teams that have just done up last years car Mclaren have really pushed this design.

It will either work or totally fail in true Mclaren style.
B

Social Media Team
The Mclaren is HIDEOUS from the front (looks like it has massive nostrils), but beautiful from the side. Let us just hope it works!

That McLaren is gorgeous in it's vulgarity.

Those side pods are epic, reckon they could be another KERS or F-Duct that they've come up with.
B

The McLaren is very odd! I think it looks awesome though.

Apparently Renault are being suprisingly fast in testing, and with Kubica being a pretty sweet driver as he is, hopefully we'll see him getting some wins this year and stirring things up a bit more.

Don't think the same came be said for Petrov.

In the last hour, Robert Kubica has reportedly driven a rally car into a church wall. The Polish Renault star is said to be in a stable condition, but extent of his injuries currently uncertain, though it looks unlikely that he'll be back in an F1 car before the start of the season.

Will said:
In the last hour, Robert Kubica has reportedly driven a rally car into a church wall.
Click to expand...

What else were they expecting to come of painting it orange, green and white?! When will they learn?

Whoops with Kubica, reminds me of Montoya and in a way Webber. You can now see why Mclaren stop their drivers taking part in these events.

So Bruno will jump in the car, and everyone is already saying it is meant to be due to the name and colour of the car. Lucked intio a top drive even though he proved nothing last year other than he was slower then Klien.

Shame for Kubica and probably us as F1 fans as well as they seemed to have built a good car.

Here is some more information.