Five Things That Changed Theme Parks - Part 1: The Use of IP

Staff member
Administrator
Moderator
Social Media Team
Over the next few weeks, I'm going to take a very basic, surface level look at five aspects of the theme park industry that has influenced and changed it, for better or for worse. There's no way I'm going to cover everything, so that's where I'd like you to jump in and fill in the blanks with your own examples and thoughts.

The use of Intellectual Property is nothing new. The 'theme' park industry was built on it, predominantly thanks to Walt Disney, Universal Studios, and Six Flags who had recognisable characters and movies at their fingertips, that they could use to promote their attractions. Sponsorship of a ride may help with construction and maintenance costs - take Chessington's use of Skips for Dragon's Fury, or Georgia's Own Credit Union's sponsorship of Georgia Scorcher - but it can only go so far.

Since the start of the century, sponsorship notably extended, with parks taking out license contracts to create instantly popular themed attractions or lands. A park is likely to receive more coverage and sell more tickets if they are using a familiar brand that people feel emotionally attached to. Legoland is probably the ultimate example of this. Studio 100 bought Plopsaland de Panne as a place to bring their characters to life; they now own seven theme parks attracting 3,000,000 visitors a year. Cedar Fair parks expanded their Peanuts based attractions into Planet Snoopy at most of their parks between 2008-2011. Paultons Park opened their first ever themed land, Peppa Pig World, in 2011 which doubled their attendance figures in a year. Blackpool Pleasure Beach replaced their children's area with Nickelodeon Land in 2011, and also opened Wallace & Gromit's Thill-O-Matic dark ride in 2013. In 2019, Kennywood opened 'Steelers Country', a new themed area based on the city's professional football team, the Pittsburgh Steelers. The nutshell is you'll be hard pressed to name a park that has not tangled itself with a brand of some kind.

Although using instantly recognisable brands does help publicity, there is an argument that it's a lazy approach. Almost as if a park is after an instant hit and can't be arsed with all the effort that goes with creating something from scratch. An established brand/IP is going to have a marketing team and customer reach already in place, so a park can piggy back on it. It is difficult to bring a new brand or idea to market, but when an established park already has a reputation for making good investments, they should be able to create their own iconic rides without the need of an IP. Merlin (and Tussauds before them) do this well - their in-house branding has created some renowned rides with a "brand" of their own; Nemesis, Smiler, Vampire, Oblivion, Swarm and so on, so you can forgive them for the occasional tie-in with things like Saw: The Ride and CBeebies. 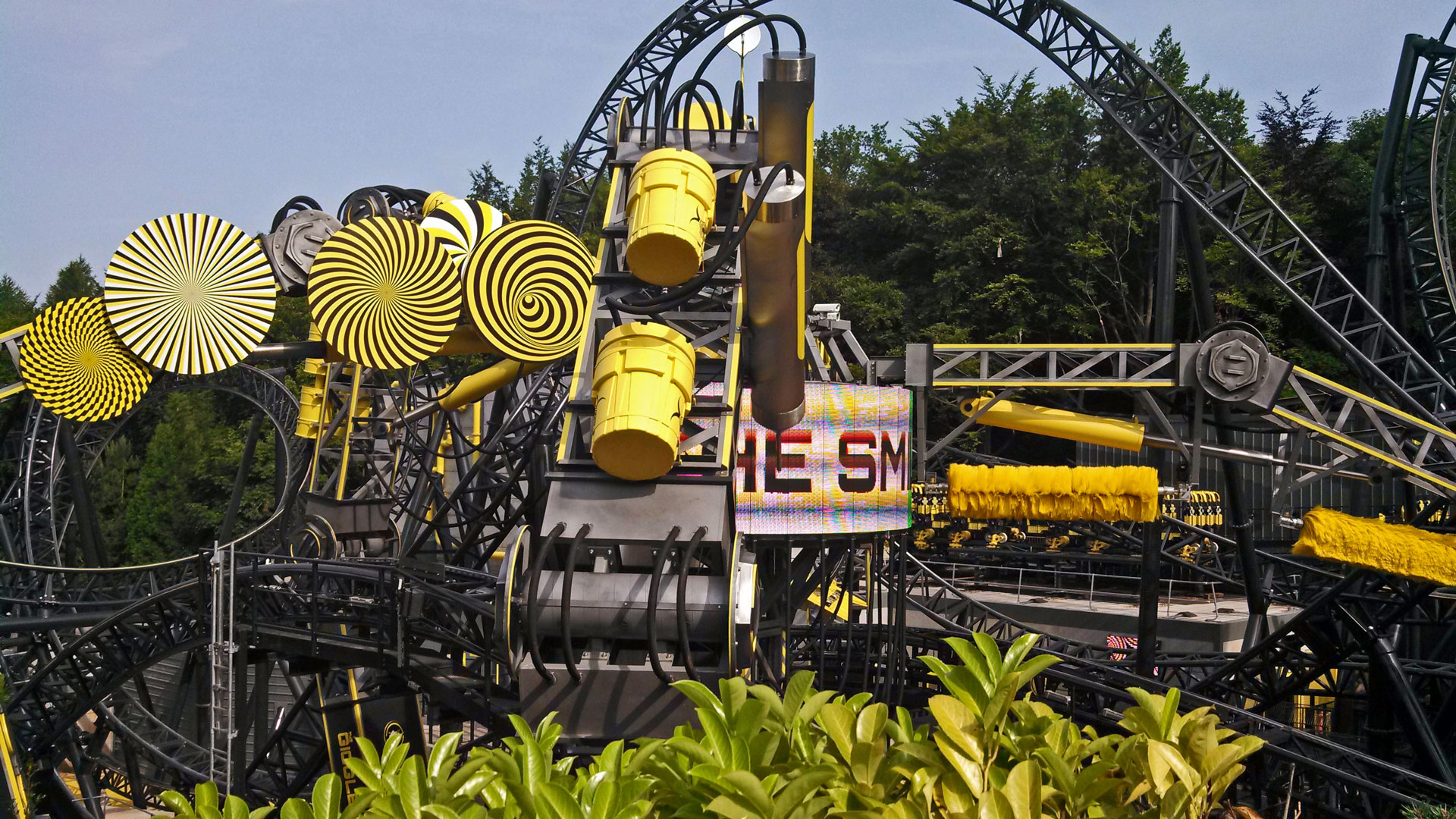 So IPs can be separated into two camps - in-house created by the park itself or an external brand. I wonder what there's more of. Having done no research whatsoever, I'd take an educated guess that in-house IP outweigh external brand IP, namely due to the Disney and Universal parks, plus historical rides that opened way before IPs became a thing. I think it would be a fair assumption to say that most new rides are in-house branded rather than associated with an external IP. The main difference is IP branded rides have the ability to shout the loudest, comprehensively advertise, and attach themselves to our subconscious with a degree of faithful familiarity.

IP is here to stay and it's only going to become more prolific as the years press on, but I do wonder how much it actually impacts on my personal enjoyment at a park. As much as I love wandering around Wizzarding World of Harry Potter and turning my nose up at Angry Birds Land at Thorpe Park, very few of my favourite rides are third-party branded rides. IP may be a part of the theme park experience, and they can dress any ride up to look and feel special, but ultimately nothing beats a well designed ride.
Last edited: Jan 31, 2021

Staff member
Administrator
Moderator
For me, I think it's all got to be consistent. It's not lazy if it's "everything". It doesn't have to be the entire park, but it needs to be done with depth and consistency.

Peppa Pig in Paultons works because that entire area is dedicated and consistently Peppa Pig. Disney isn't always pure Disney (screen) IP, but it's always consistently "Disney". Alton Towers (and Tussauds/Merlin) started to lose consistency. Air in Forbidden Valley being a prime example of breaking the immersion. Saw, stuck on the edge of the kind of Mayan jungle theme in Thorpe (Angry Birds making an even worse half-arsed impression).

I think there's something special about a park's own branding and IP though. Getting the badges that say "not only am I a good, but I'm a goon to the extreme of buying into a park IP, where there is nothing but a ride and some stuff I made up myself as a story for it. You can buy a Dumbo badge anywhere, but you can only get a Wickerman from Alton (and all other Merlin sales outlets ).

One of my favourite ever ride "experiences" was the original Space Mountain at DLRP. The visuals standing outside, the theme, the sound, the music, the atmosphere - it was all superb, and it continued through the ride too - taking a rough as a badger's arse Vekoma and making it into something completely different. Not a world-class ride, but 1,000 times better than it could have ever been, stuck in a car park.

So no, nothing beats a well-designed ride, but an immersive theme and IP can elevate it. Let's face it, Wallace and Grommet at Blackpool is infinitely better than "Gold Mine" ever was

Staff member
Administrator
Moderator
Social Media Team
This thread made me think... and a penny dropped... a long way away, but a big penny.

I've never really thought about the fact that "Nemesis" is an IP. It's just an in-house IP.

When you say "IP" to me, I think Potter, Jurassic Park, Superman, etc. I think of the IPs that exist outside of parks, often long before the ride(s) are built. They have their own brand momentum and (when done properly) the rides can really capitalise on that. In many respects, the legwork is already done. If Harry Potter didn't exist, and the Hagrid coaster had still been built, it would still be a fantastic overall experience - but I'm willing to bet it wouldn't be as well received. Everyone knows the characters, the music, the setting, etc, and it conjures up those chemicals related to enjoying AND recognising the experience.

For an in-house IP it's a different situation. The park has to work hard to create (and maintain) the brand for their new ride. Of course, they have freedom too. They're not limited to contracts or creative types mandating aspects of the design, they don't have to worry about not getting the shade of blue quite right, all that stuff that probably makes a formal IP a pain in the arse. Thankfully companies like IMAscore exist (along with many others) to help parks create their branding.

Dunno if that makes any sense, but it was a new thought for me. Interesting.

Staff member
Administrator
Moderator
I think that there's a perfect example at Universal Hixee. How much better received was Dragon Challenge compared to Dueling Dragons? I seem to remember people preferring the original IP in that instance. I think you're right about Hagrid's, but it's not a trick that can always be pulled off, just by half-arsing some familiar theme onto a ride.

I think the lazy label comes about when it's clear the park haven't spent much money on a new attraction, and just hope they can cover that up with the flashy lights of a friendly face. "Yeah it's just an Enterprise, but it's got Percy Pig's face in the middle! You like Percy Pig don't you?"

Like Furie, I think IPs work best when they're properly integrated into the ride. You can tell when it's been designed into the experience, like Peppa Pig, versus tacked onto something already in development or built.

I also think it's important that the attraction isn't so closely tied to the IP that it's impossible to undo if/when the contract expires. Sonic spinball is a good example, it was themed to a pinball machine, sonic has a pinball game, slap a name on and some figurines and it's done enough for Towers. When Sonic had to go back to the green hill zone, it was easy to just turn it back into a plain pinball theme. Pepsi Max Big One is an ok counter-example, it *should* have been easy to un-Pepsi! Just whip those cans off and you're good, but they didn't and everyone still calls it pepsi max!

That also brings up a question: where's the line between an IP ride and just a sponsorship of the ride?


furie said:
Let's face it, Wallace and Grommet at Blackpool is infinitely better than "Gold Mine" ever was
Click to expand...

You take that back! Take it back this instant!