It might look weird, but the track looked like it needed it. The reason it looks weird is because the cross ties are closer together.

This might be answered in one of the articles, but would they have had any opportunity to do some quiet reprofiling? Try and get rid of that classic Vekoma jerk.
B

According to what I read, they are reprofiling the transition into the corckscrews and the remainder of the layout doesn't need much rethinking as it was supposedly rather smooth already. I don't have any trustworthy source though.

balrog said:
According to what I read, they are reprofiling the transition into the corckscrews and the remainder of the layout doesn't need much rethinking as it was supposedly rather smooth already. I don't have any trustworthy source though.
Click to expand...

That vile helix was never smooth.

The turnaround after the loops is complete and now the first corkscrew appears.
Photos from Eftelwesley on Twitter. 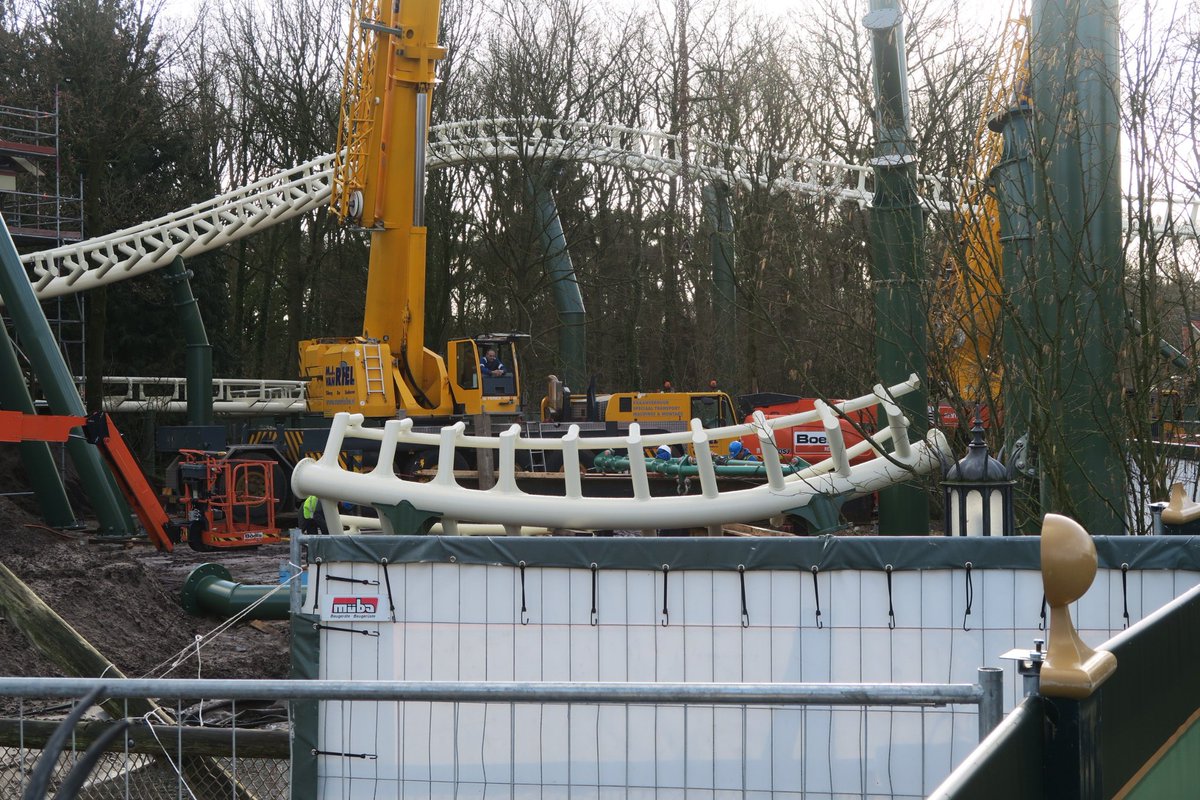 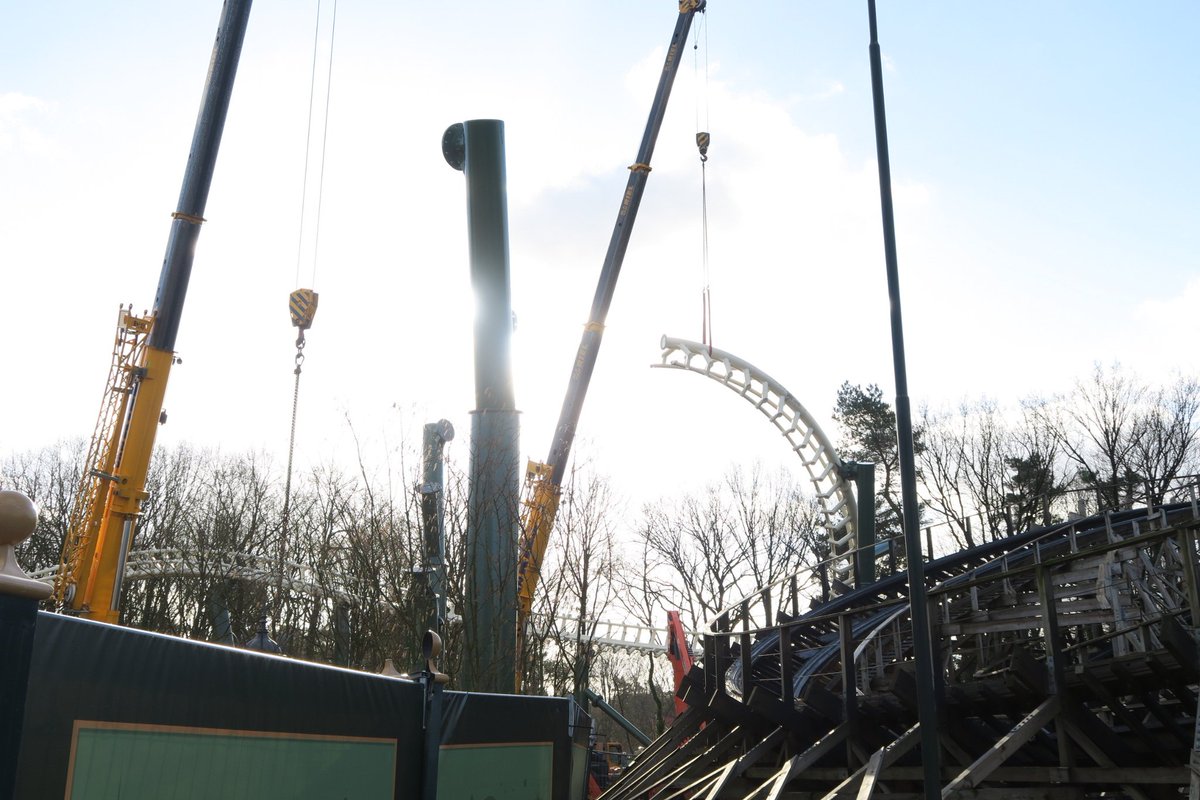 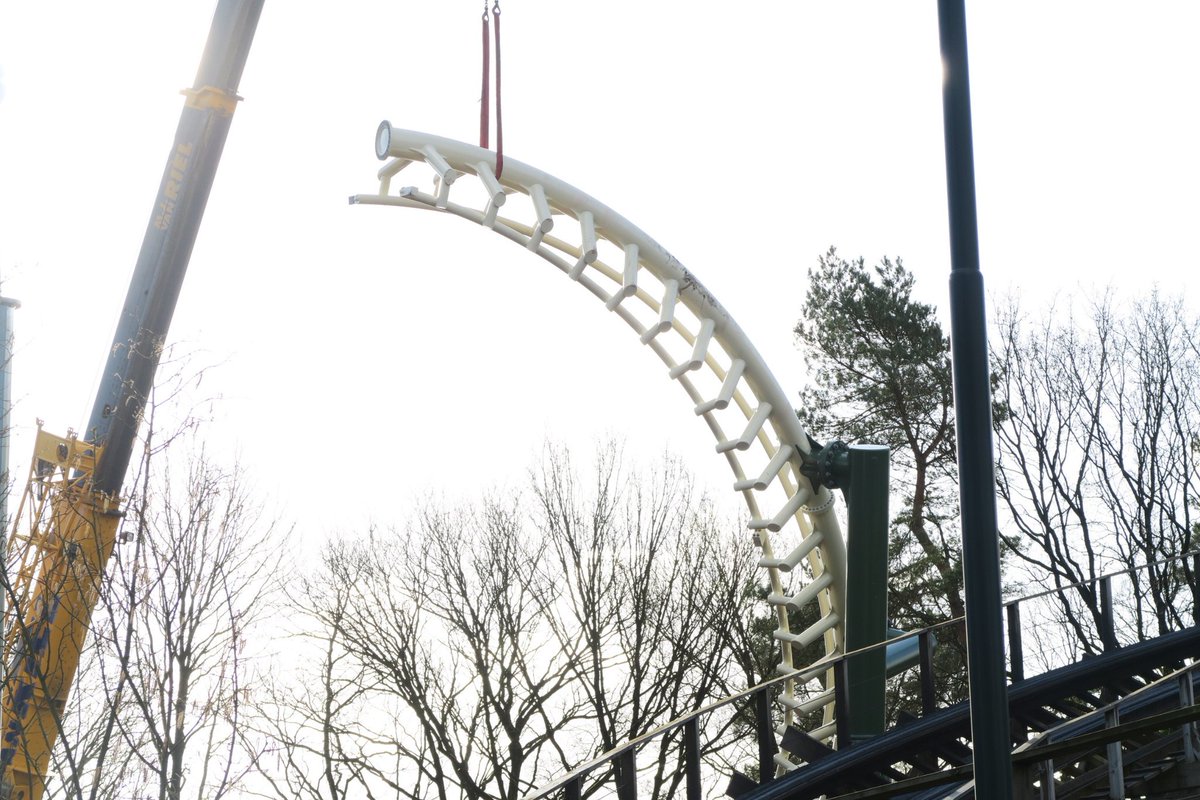 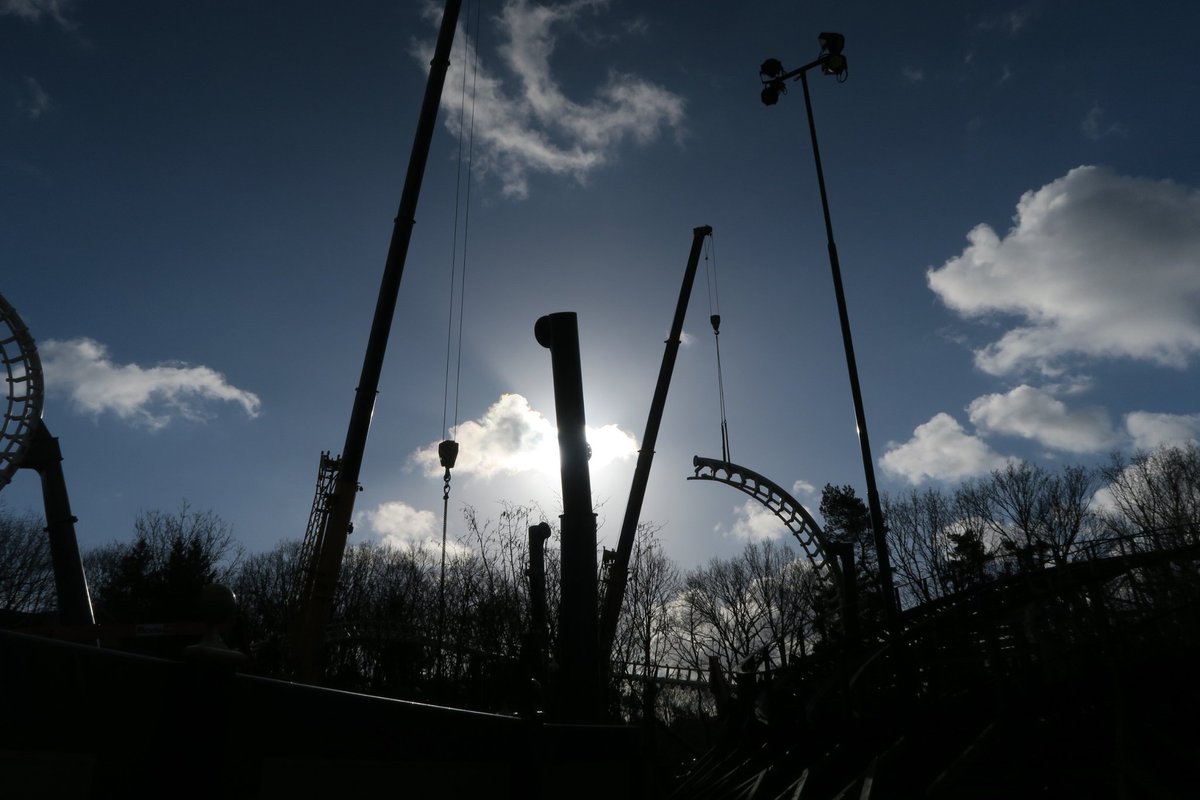 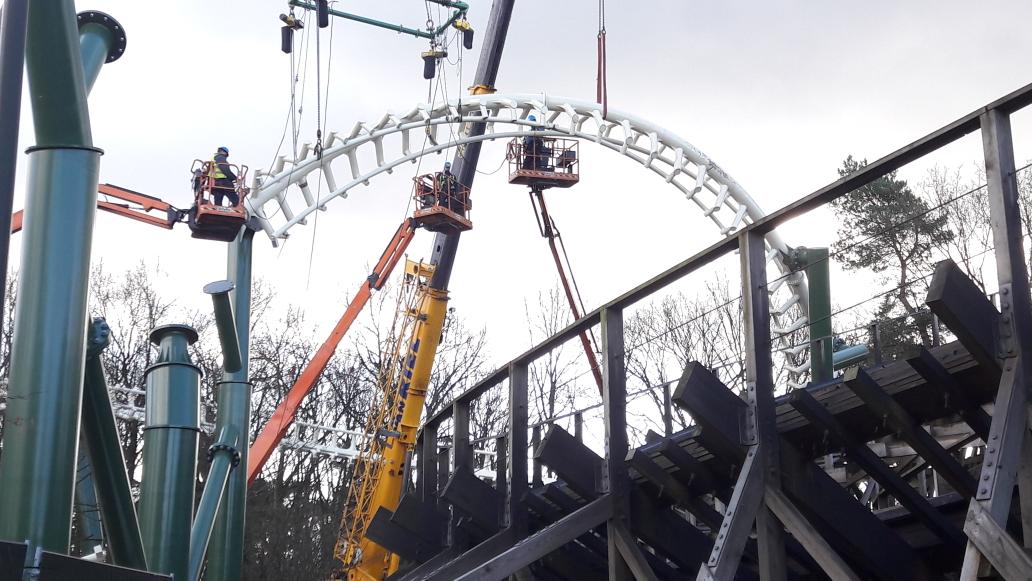 It looks interesting to say the least.

It's interesting seeing the supports get moved out of the way to accommodate the new heartline, while still using the existing footers

I hope they reprofiled the entrance into the corkscrews. Always the worst transition of any Vekoma/Arrow looper.

The tubular track ties look very different to the flat plate originals, but also check out the bolted connections on the outside of the rails - I've never seen that before!

The entrance into the corckscrew does seem to be much better than what it was before. As seen in the pictures in this tweet.

I take it they're leaving the station, lift and turn original?

Peet said:
The tubular track ties look very different to the flat plate originals, but also check out the bolted connections on the outside of the rails - I've never seen that before!
Click to expand...

I am not sure, but is it possible that older Vekoma coaster rails have been welded? As far as I know, modern coasters are just precisely screwed together, since weld seams may impair the smoothness. Usually the screws are between the rails, which obviously isn't possible with this track style - so they are outside of it. Just screwing the main spine together isn't enough since the rails are so far away from it.

More progress on the corkscrews, again from Efelwesley on Twitter. 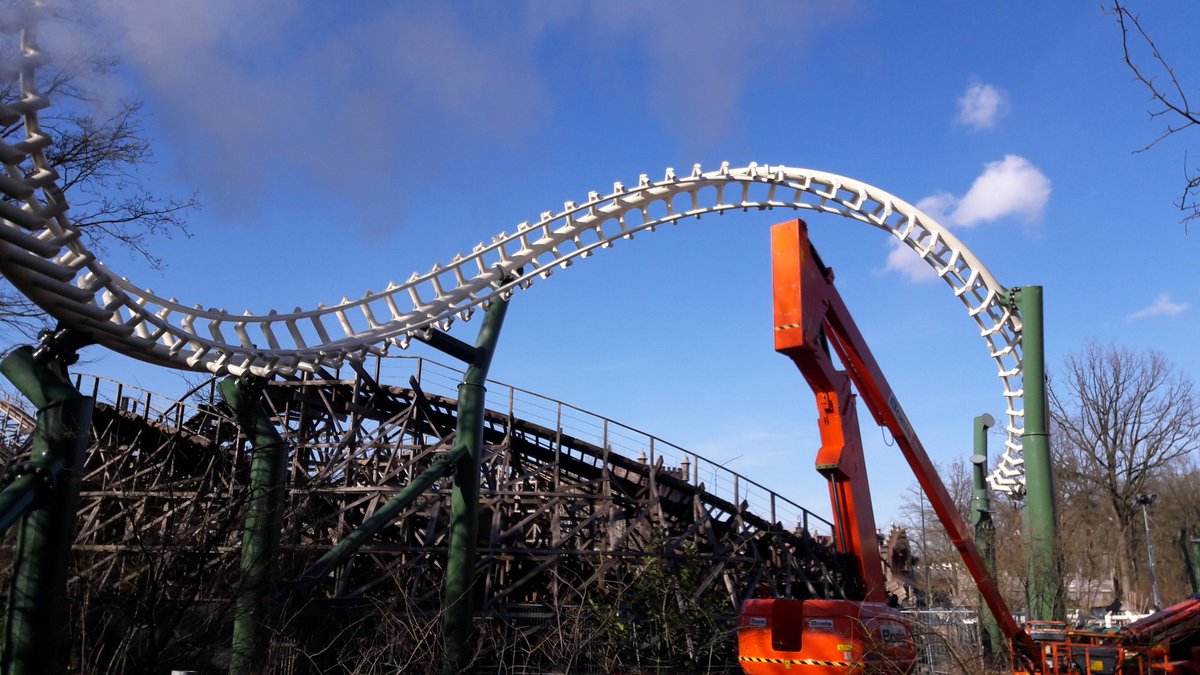 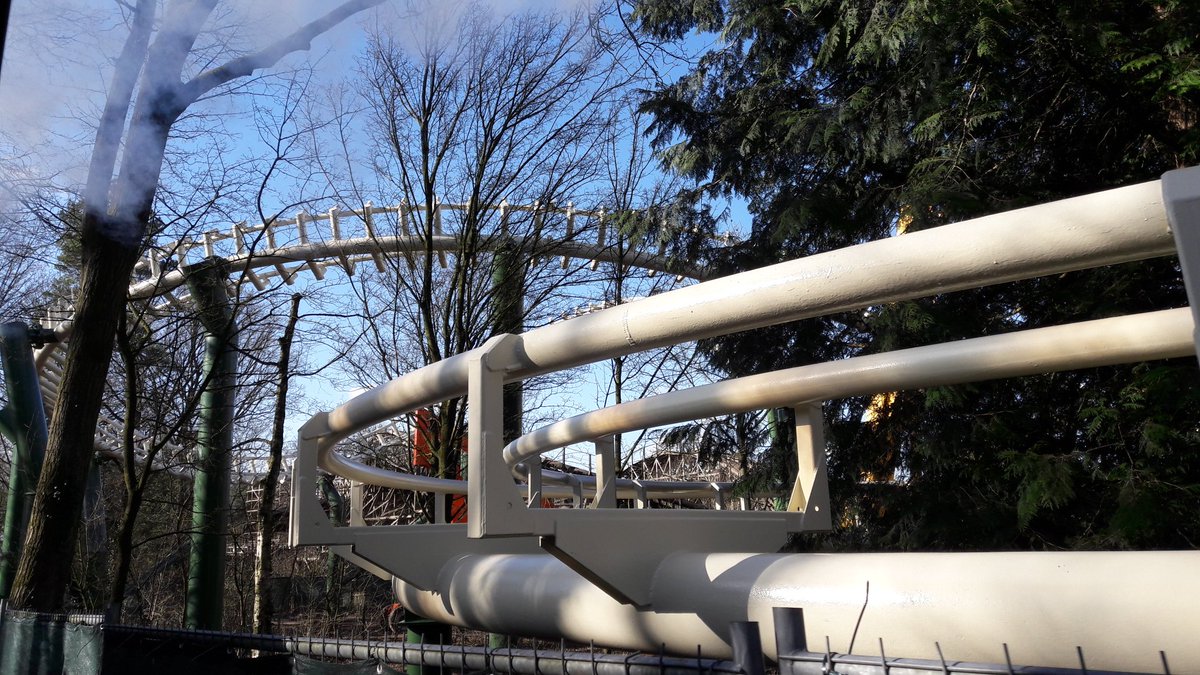 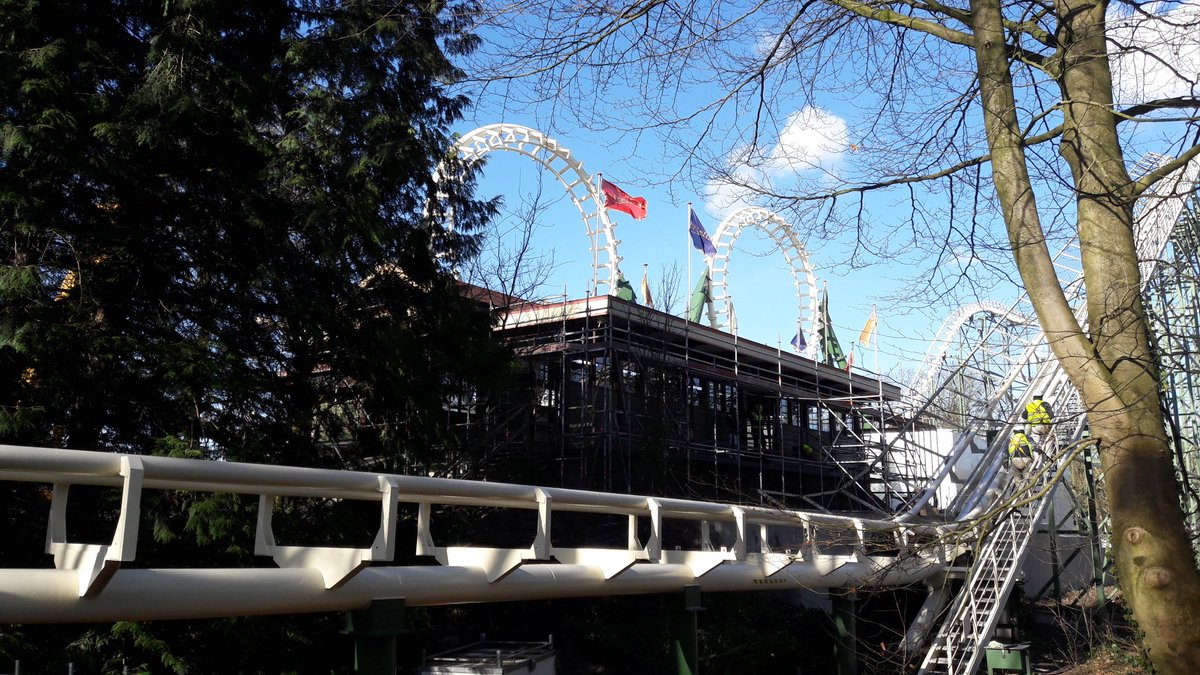 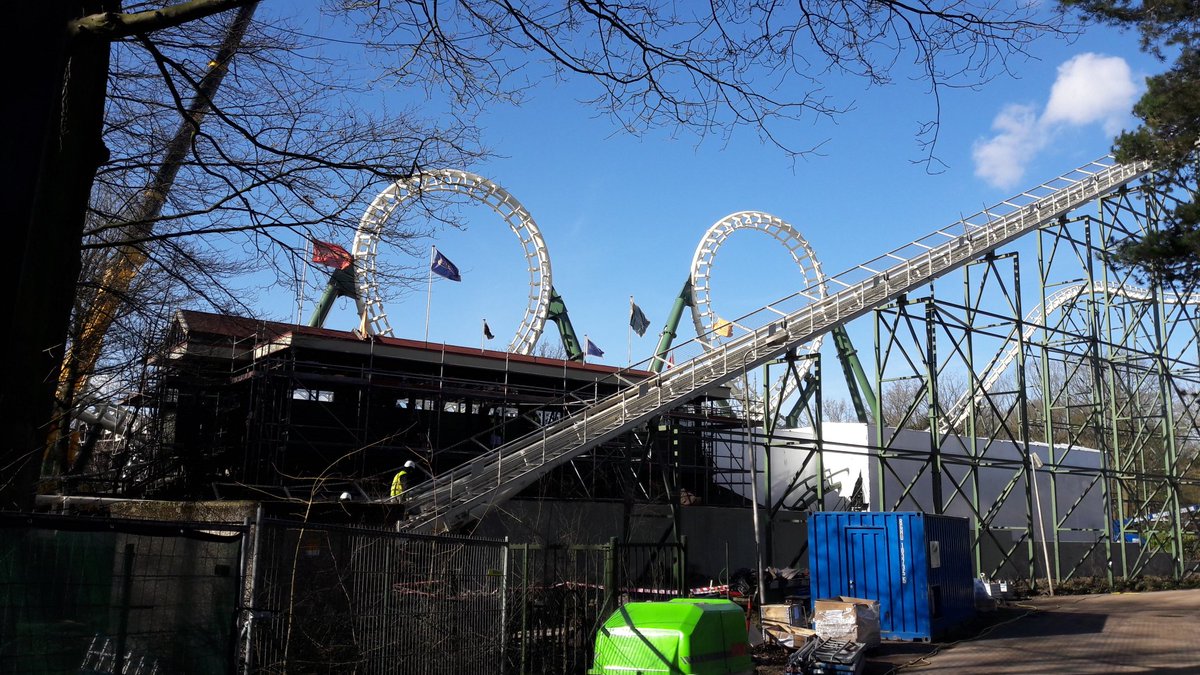 Dar said:
I take it they're leaving the station, lift and turn original?
Click to expand... 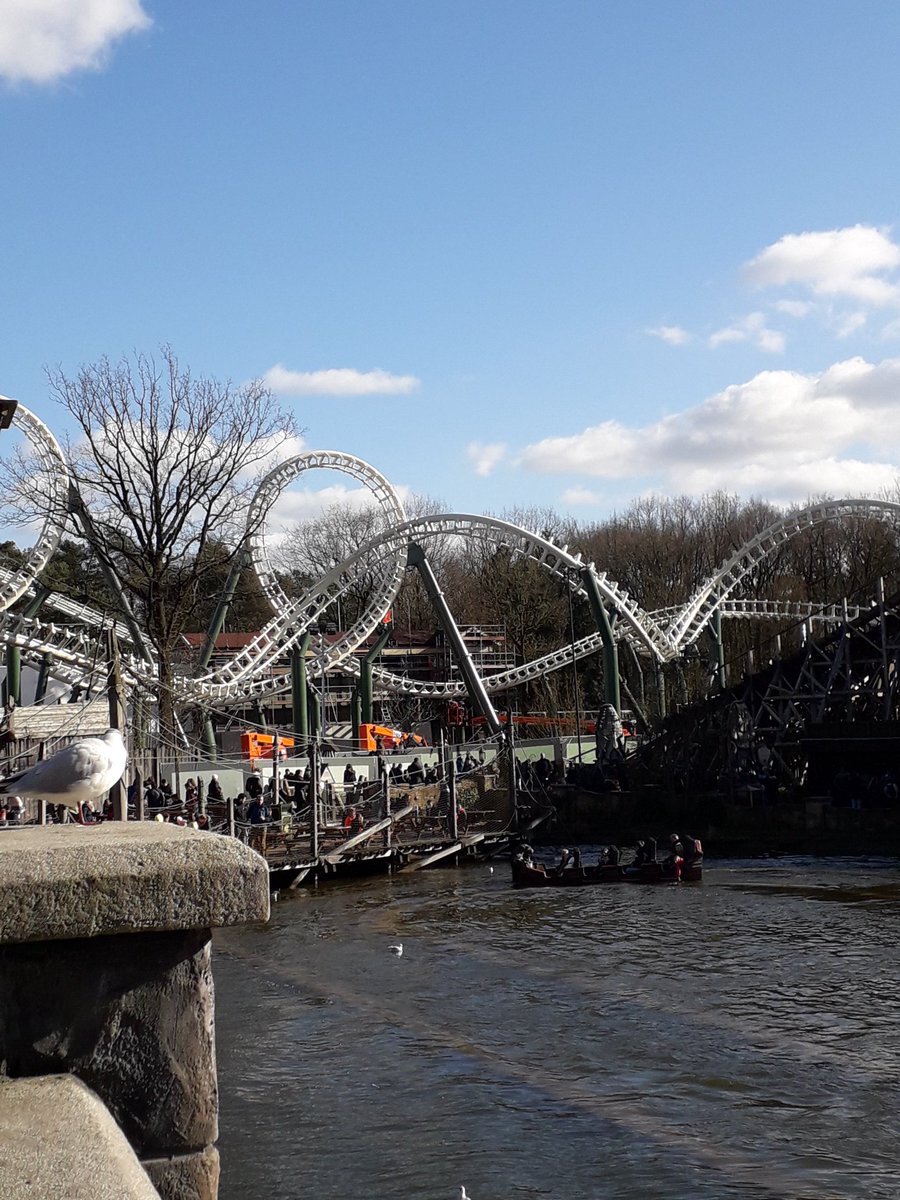 The lift hill has received a new chain.

Bridging the gap between the old track first drop and the new track loops. However the track didn't actually fit and they had to saw off some more of the old track to make it fit.

The first parts of the helix went in yesterday. https://twitter.com/jeroen989 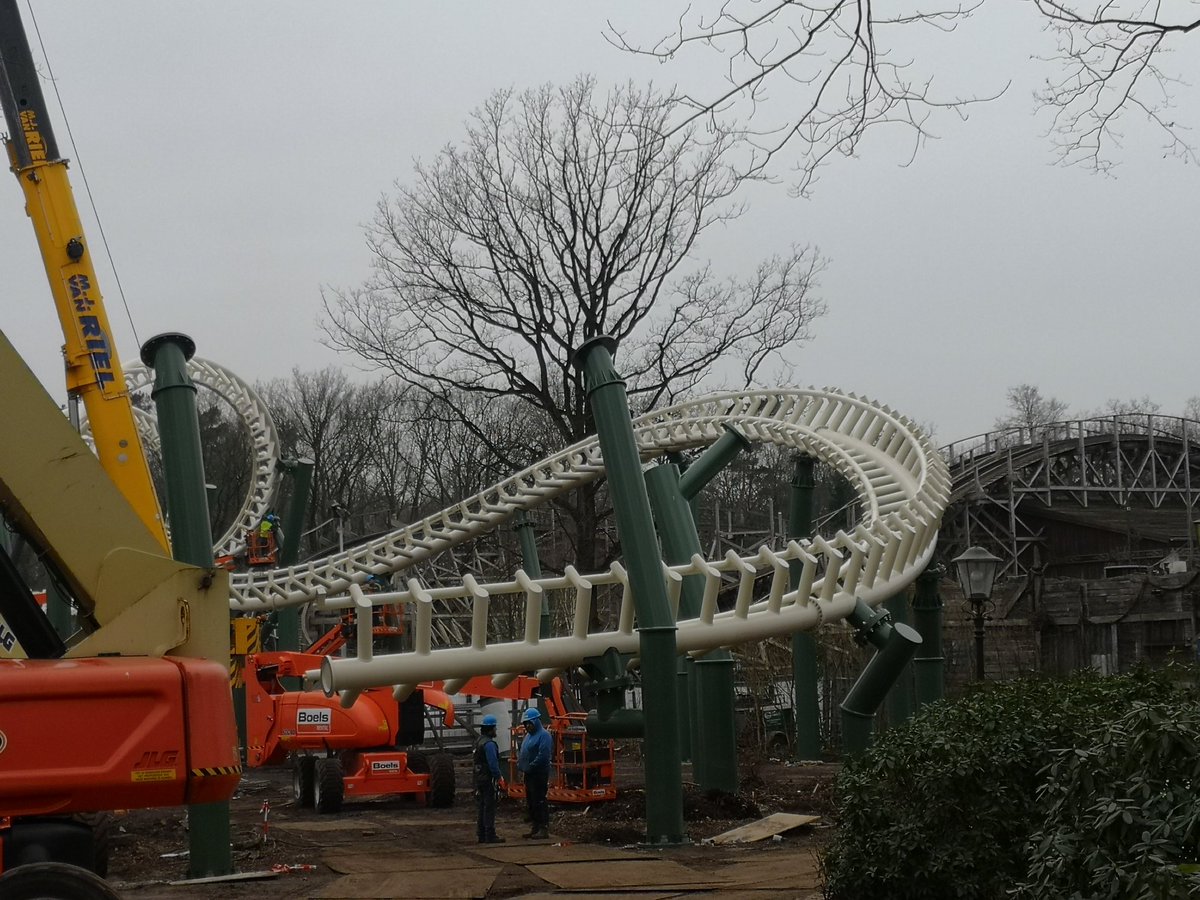 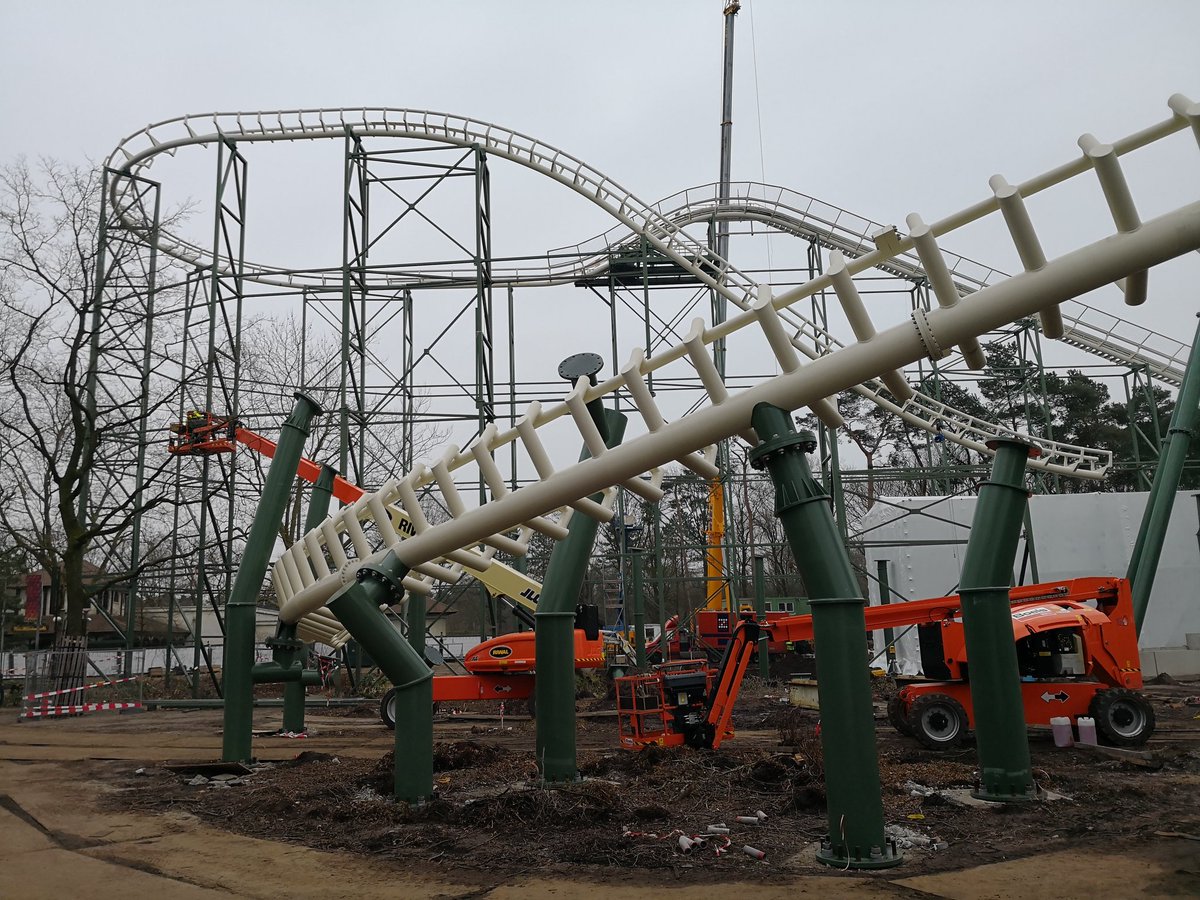 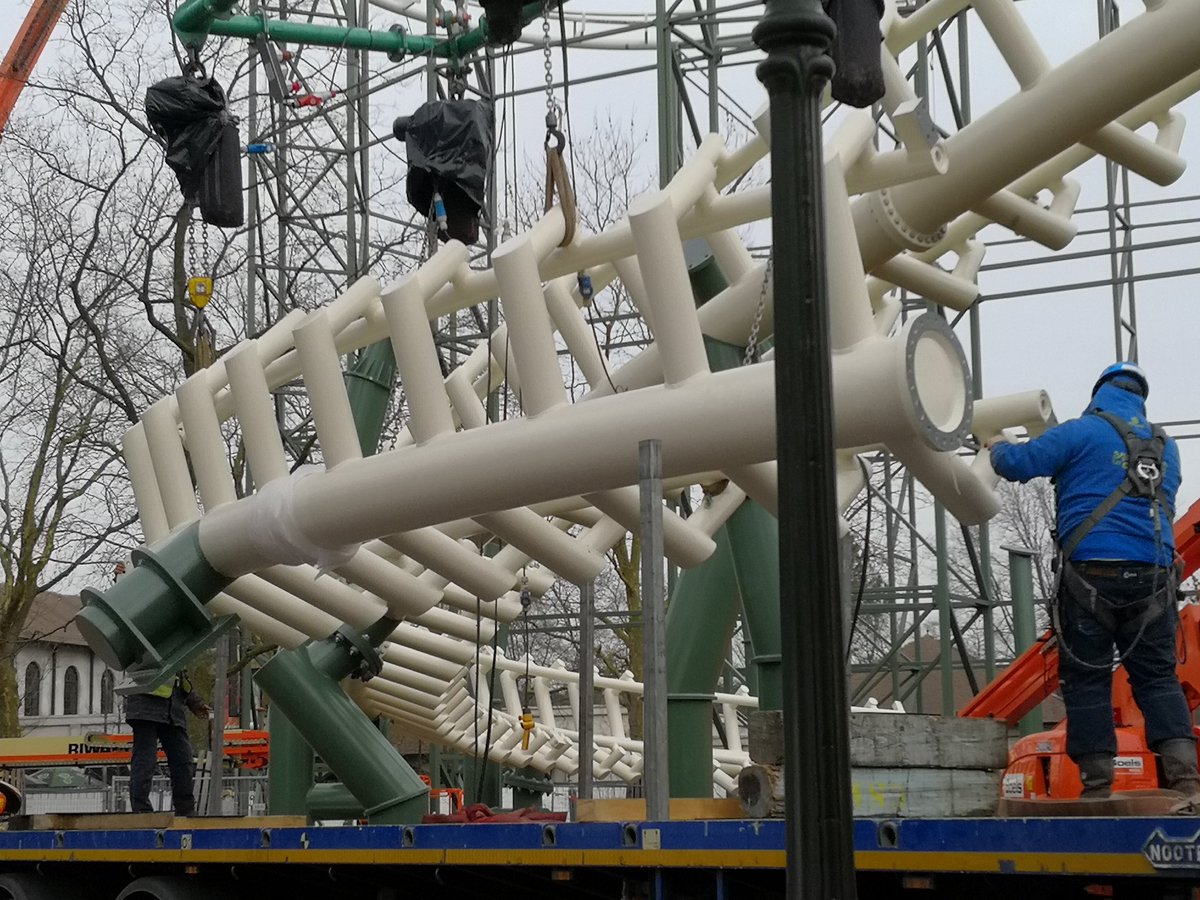 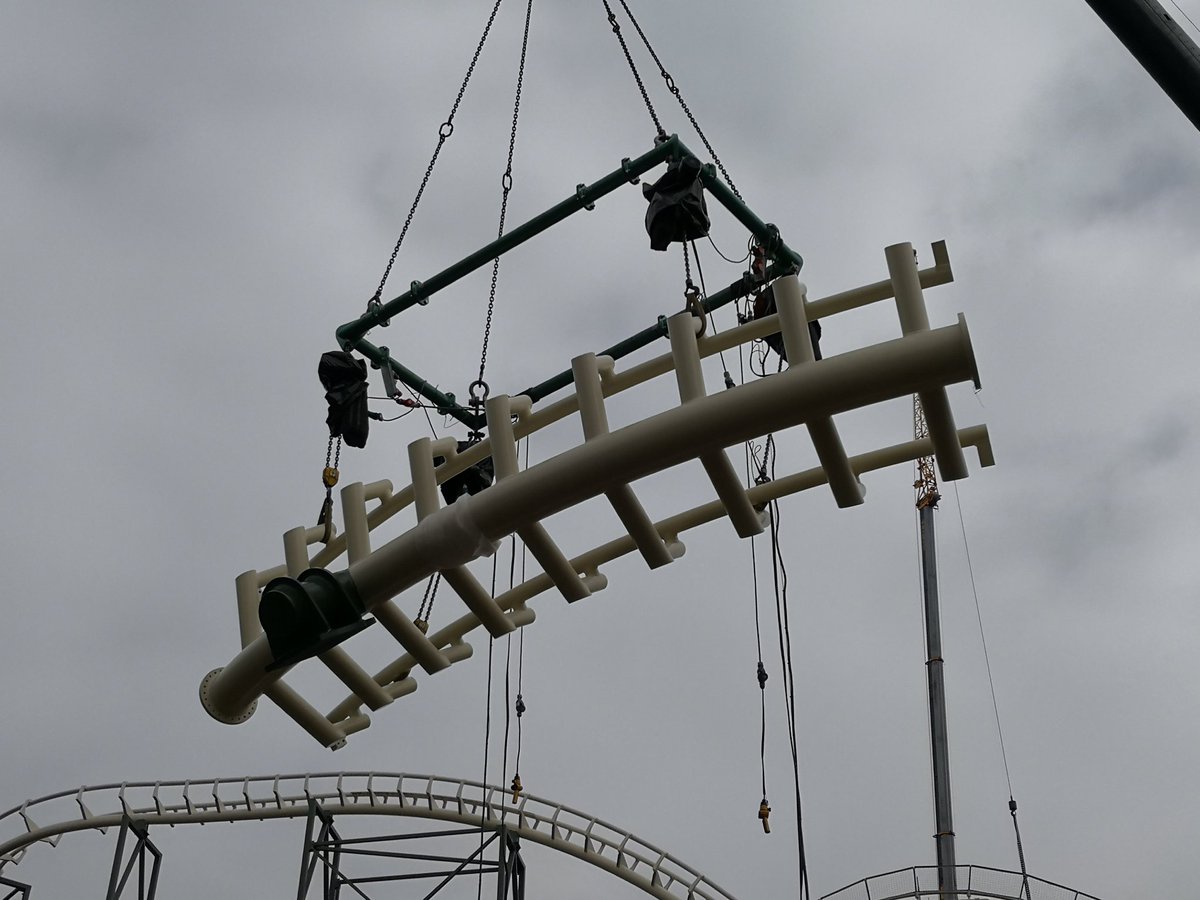 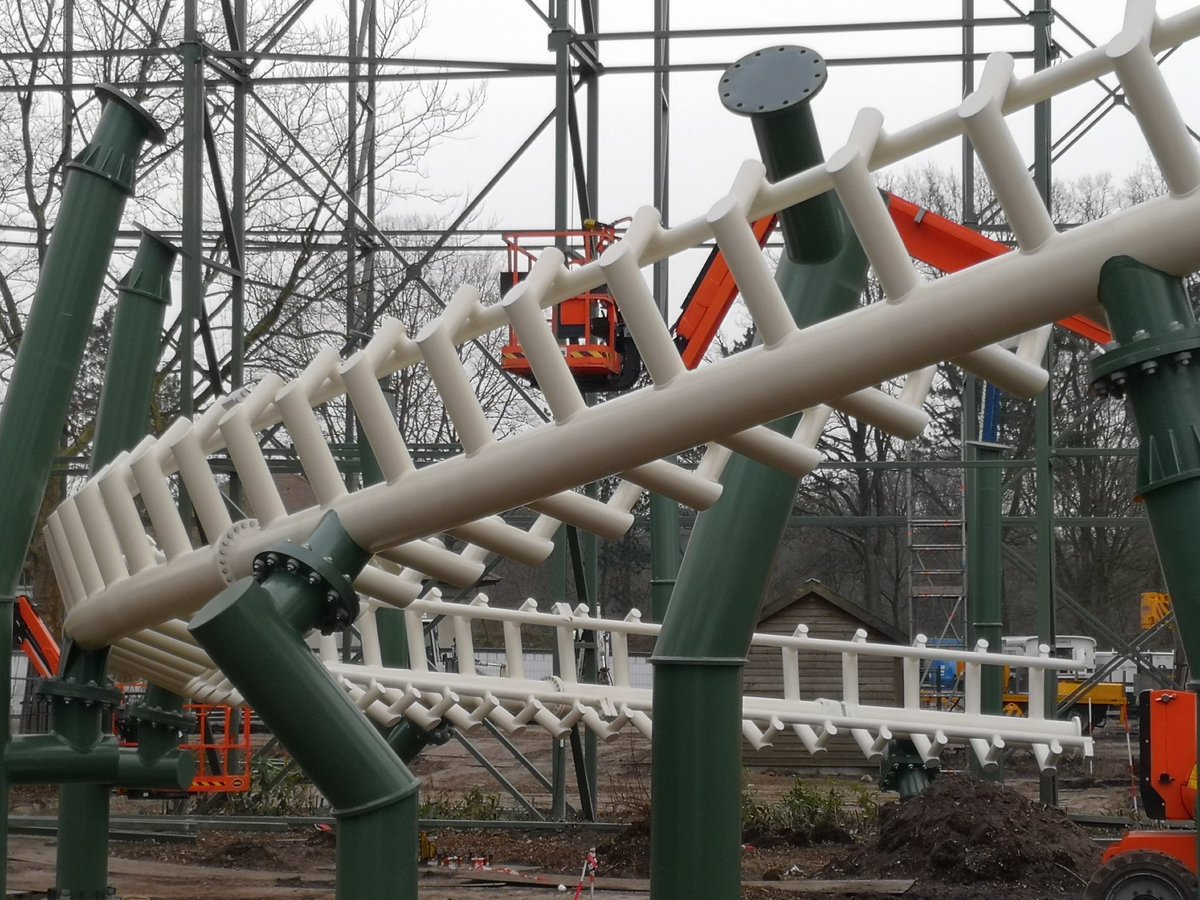 Not long now until it is finished.

The track looks so big and bulky

Also before Python closed Efteling trialled their version of Disney's Fast Pass system. The experiment in which visitors had to reserve a Boarding Pass before a ride was, according to a spokeswoman, successful. Therefore the system will return when Python reopens. "Our guests appreciate the simplicity of the system, which is why we continue."

The concept were, unlike Disney, the normal queue is closed when the Boarding Pass system is in use and visitors can only ride if they reserve their place in the queue will not change. Requesting a Boarding Pass for a time of your choice can be done via the Efteling app or with the aid of ticket machines next to the attraction.
A maximum number of people is allowed every 15 minutes so the queue stays short.
Also a single riders line will be added to Python for the first time, and the waiting area for disabled guests is being enlarged.

Efteling have also now decided to test the system on Symbolica. During weekends this March visitors will only be able to ride Symbolica with pre-reserved Boarding Pass. You can place a reservation for a time of your choice at the ticket machines or via the official Efteling app. The single riders line will remain open.

The park have said they currently have no plans to add this system to any other attractions.

I really like the idea of having an exclusively fast track queue on a few popular rides. A system like this exclusively for something like Crush's Coaster at WDS would be great. I went mid January last month where the wait was a solid 50 minutes all day when no other ride went above ten. It would be a bit of faff either getting a ticket or going on the app but I can't see how anyone would prefer waiting in a long queue. And if it's just for one ride in a park then the argument of wanting to enjoy the day naturally without rigorous planning doesn't really apply.

I suppose the downside is that on a busy day they might run out of fast track slots by lunchtime but we'll find out if it's a viable system when Efteling trial it on Symbolica in March.

I'm surprised they're continuing with the boarding pass system because I heard largely negative reviews about it. At the same time, I believe they had a fair few technical issues during the trials, so it might be a case of now they've got the tech-side ironed out, they can give it a fair trial. So that's good.