Hixee said:
I mean, hypothetically it uses more "total" power. The train is accelerating from stationary to the final speed all the same, but instead of inputting all that energy in in one step, you do it in three stages with friction losses in between. The power input isn't linear, but that's not really important when you think in these terms.

What the multi-pass launch does offer you, however, is a lower "peak" power draw. You're spreading that power surge out more. Sometimes (in fact, often times) that's the bigger problem for utility infrastructure. Peaks are a problem, total net power isn't usually so much of an issue.

The other benefit, although not utilised here, is that you can make the launch track much shorter giving a bit more flexibility in the layout.
Click to expand...

Obviously I have absolutely no idea if this is the case or not, which is why I was asking

The POV reminds me of my first attempt at a zero g roll in No Limits.

The colour-scheme is gorgeous.

We have THE OFFICIAL POV!!

Looks a bit better than the other POV at least.

Staff member
Administrator
Moderator
Apart from the agonizingly slow beginning, it definitely is a Blue Fire clone all right.

Not that that's a bad thing, of course. It kind of amazes me how such a large coaster has become such a successful clone model. There have been more Blue Fire clones built than Intamin Impulse coasters, for instance. Counting Steel Taipan, there is just one more Batman clone in operation than Blue Fire clones, and the former even has the advantage of being bought by the notoriously clone-happy Six Flags chain.

CrashCoaster said:
The real question for me with this ride is will it be better than the other Blue Fire clones?
Click to expand...

Was watching the video and without that I saw you wrote this, it was my first thoughts too.
I like Blue Fire. Don't really think this is an upgrade to the coaster.

They've just over-engineered this one tbh. This variant doesn't really add any thrill aspect except for travelling backwards briefly (at a sacrifice of riders per hour I imagine). They should have just modified the existing circuit layout IMO.

A close up image of the snake skeleton themeing:

And some interesting pathing: 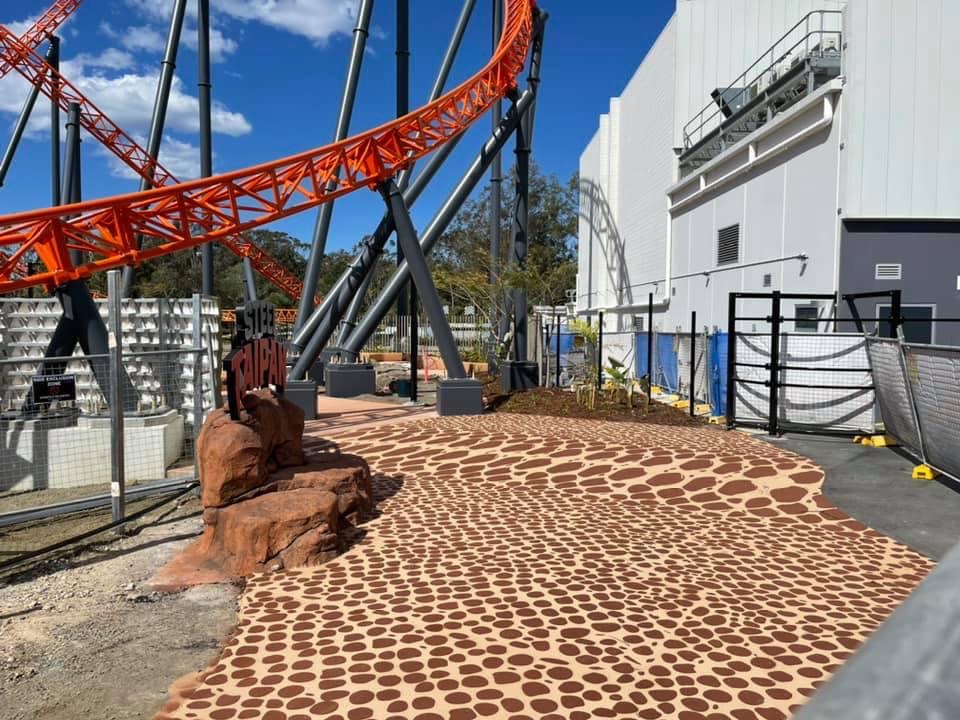 Is it me or does that sign seem really small?

My headcanon: it was designed with all measurements in inches, which were somehow changed to centimeters without conversion when the sign was manufactured.

That seems very likely for some reason

The spinning seats are on the track.

Niles said:
The spinning seats are on the track.

Does seem to spin more freely than the BF Footage

POV from the spinning car, looks like you will get a pretty good spin, that bit after the mid course looks brilliant.

Hixee said:
Haha, yeah that little sequence from the MCBR through the two corkscrews looks wild!
Click to expand...

As does the final inversion yessss!

damn... maybe I'll have to fork out for that. spinning inversions is always fun.

I'm meant to be in brisbane for a conference (borders open fingers crossed) dec 6... wonder if that will be in time or not...