I thought it might make sense to have a general topic for us to report whatever dismal cred runs we've been doing to stave off the madness brought on by lack of creds.

I posted my Hastings trip in Last Cred Review topic here since I didn't think it was worth creating a new topic for, so that's the sort of thing I have in mind.

My lastest one was a brief stop-off at Dismaland Funland at Weston-Super-Mare which we kind of treated like a motorway service station off the M5.

The cred was "Euro Coaster" - yet another SBF MX49, identical to the ones at Barry and Clacton except this one has OTSRs (!).

It was fairly dull as you can imagine, OTSRs made it even worse than the others, although the views were pretty good.

The park/funfair is on the site of an old Lido which is fairly interesting, you can see a few remnants of the Lido like these coloured tiles:

It's a shame you can't get a better look as I find this kind of faded Victorian splendour quite interesting (I recently had a wander round the old Lido at Margate which is pretty fascinating in its own way).

It's the same site that was used for Banksy's "Dismaland" in 2015, which funnily enough was a sort of dystopian parody of this exact kind of attraction.

We had a very short wander on the beach:

Then we headed on down the M5. The 2 kiddie creds were both present and operating, but I didn't bother with them (bad goon?).

A couple of boring practical notes:
- The toilets outside cost 20p while the toilets inside are free and about 30 seconds walk from the 20p ones, so that's odd.
- There is parking right outside but you have to pay for the full day. Luckily it's free after 6pm and we arrived bang on 6.
Last edited: Aug 15, 2021

Peet said:
- There is parking right outside but you have to pay for the full day. Luckily it's free after 6pm and we arrived bang on 6.
Click to expand...

As a 'somewhat' local, the trick to parking in Weston is to park on the roads that run perpendicular to the seafront, only a short walk from the beach and free. I've also only ever got there early, and parking wasn't too hard. Usually looks pretty grim once it gets to about midday. Admittedly never been for the evening slots...

In amongst all of these great trip reports from all over Europe and the USA, I bet what everyone really wants to read about is my trip to grab a +1 at Clacton-on-Sea, right?

I'd "sold" it as a day at the seaside for me, wife and baby, but first order of business was of course the cred. I got spited by this back in 2013 in Aberdeen, it's always a nice feeling to resolve a spite.

The queue was painfully slow and took about 20 minutes in the end while wife and baby got ice cream. I really don't understand why these places where most people pay per ride don't seem to care about throughput. They should be absolutely maxxing-out the throughput on busy days like this to maximise their profit, but instead the staff were taking their time and enjoying the sunshine, so dispatches were about 5 minutes apart making for a staggering 144 passengers per hour. The separate offload/onload stations really didn't help here either, I don't see the point with single train rides like this.

I was lucky to grab a front row seat:

I actually rather enjoyed the ride. It is of course jerky, uncomfortable, and lacking any kind of airtime, even on the main drop (on the front row at least), but that was all to be expected. I love the low seating position, like you're sitting on the floor, which reminds me of the late great Wild Mouse (RIP), the loop is pretty fun, and overall it was just a bit of a laugh. It's in really nice condition too having been refurbished before coming here.

I love how these old Pinfaris have the Pinfari badge on the front of the train, like a car badge.

For £3 per ride I would have gone round again if it wasn't for the queue, but instead we went around the Seaquarium on the pier which was small but good value at £3 each, then went to the softplay which was pretty good for our 14 month old, but looked amazing for older kids. The inappropriately named "Wild Mouse" (a wacky worm) was closed so there was no cred whoring temptation (but my poor kid is going to get dragged onto SO many of those as soon as she is tall enough!). After that we left the pier to get fish and chips somewhere a little bit less crowded, had a stroll on the beach, and headed home.

So I had planned a little visit to a local beer festival yesterday. And entirely coincidentally I spotted that there was a fair on nearby.

Beer festival was all very "middle-class" - not very big and it did get busier than my picture suggests later on (was apparently sold out but
never got very busy - odd). Was not a huge range of beers on, but enough to keep me occupied for a few hours. Hic. 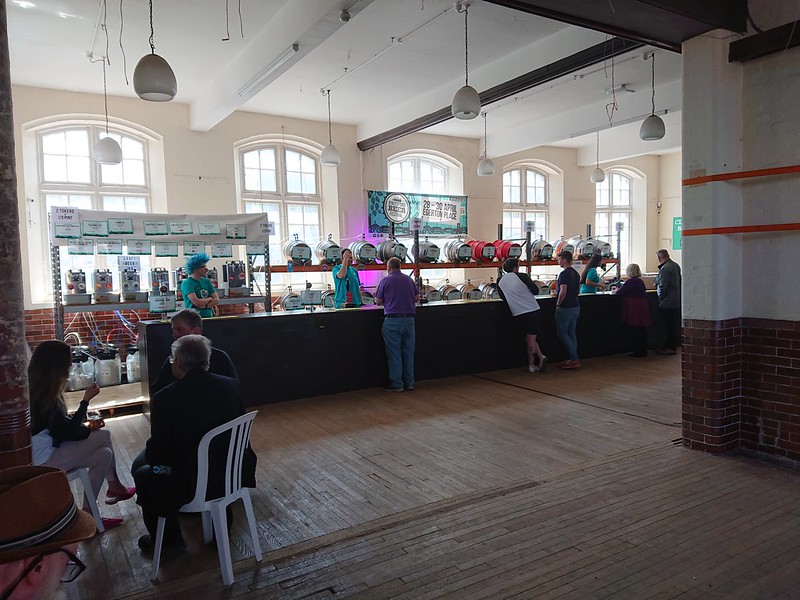 So after a few hours at the beer festival, I wandered up the road to the May Day fair; https://www.facebook.com/KnutsfordFair/

Did not know much about this apart from the old not-IP-infringement-at-all "Batman" from Wales/Malmo was there, I guessed that if that was
there then there might be a few others (like a wacky-worm)

First thing I cam across though was "Crazy Chase" though - which was surprisingly fun for a little trailer-ride thing. 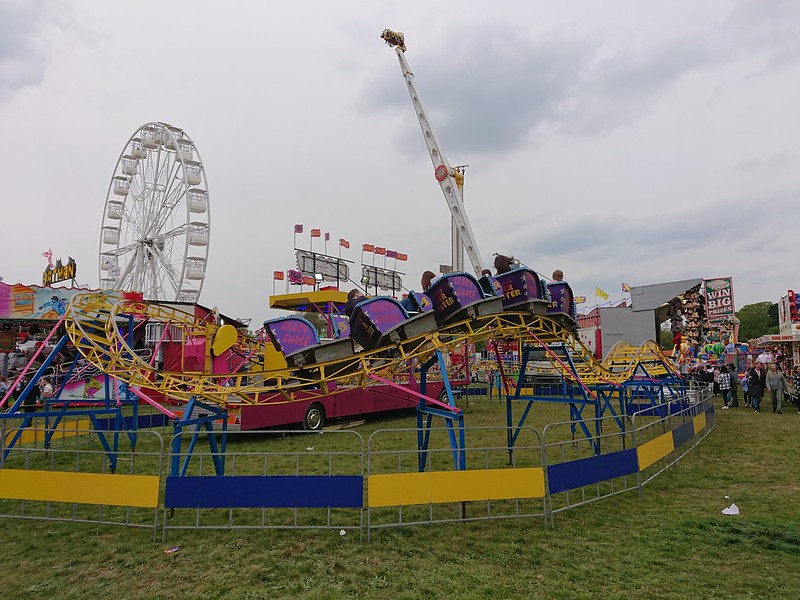 A bit further on was a "Runaway Train" (think this has been at some of the Winter indoor fairs in Manchester the last few years, so glad I
had never bothered with them then! ) 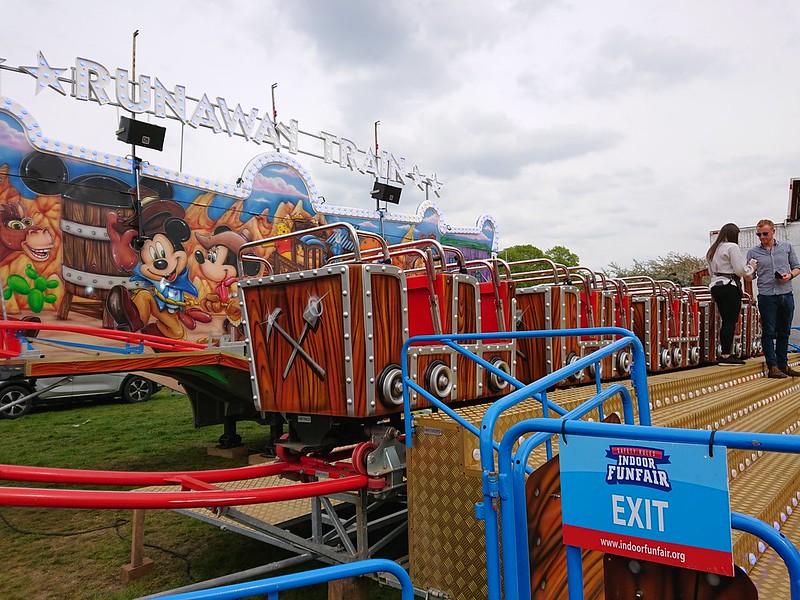 Less fun than the first one though.

"Snowman" powered kiddy cred? Yep, I have no shame. 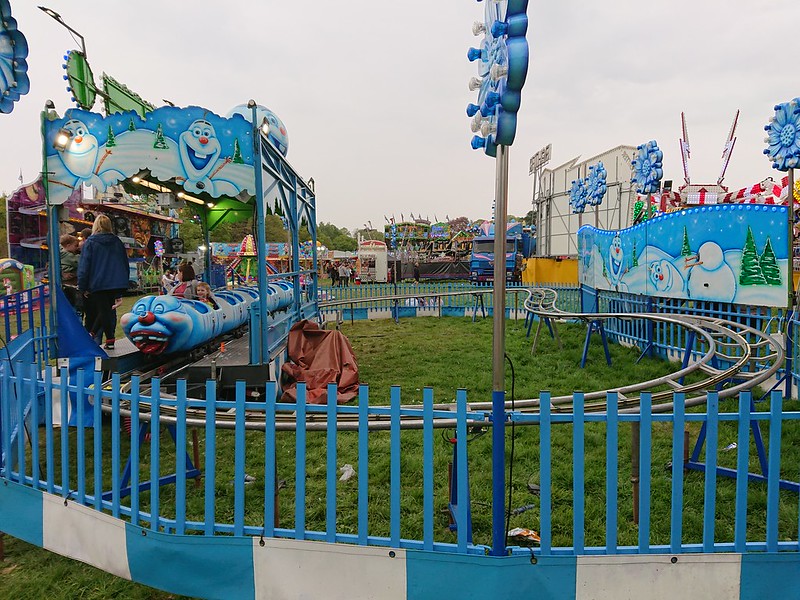 Zen ride on that, got into it OK but struggled a bit to get out. Given my beer-festival-induced state of mind I decided that "falling out"
was the best way to extricate myself from the small seats.

Moving on, ride-op would not let me ride the "Family Roller Coaster" (a go-gator) as I was "too tall" - pah! 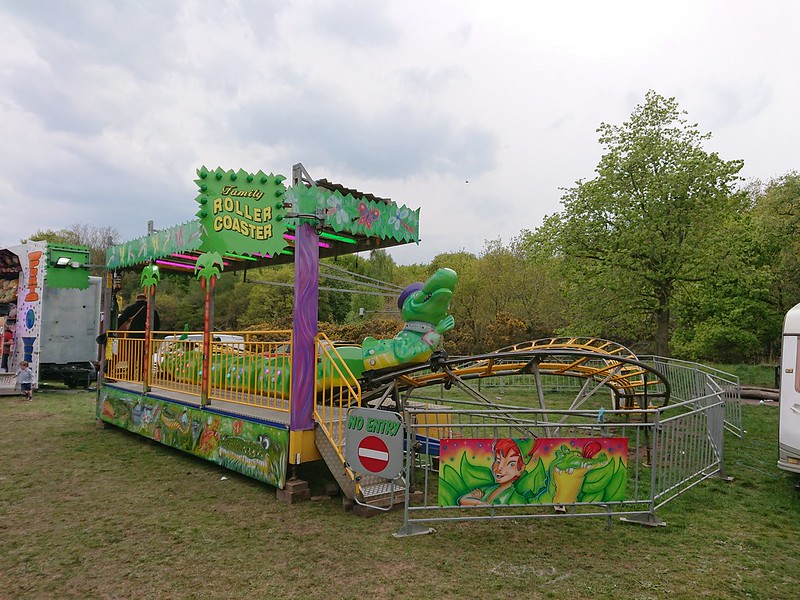 And then the "big" ride "Batman" - must have been "big" as it was £4 as opposed to £3 for the others - was good enough. I'd never ridden it
in Wales so I now think if I wait long enough all the roller coasters that I've not ridden will eventually move to closer to my house. 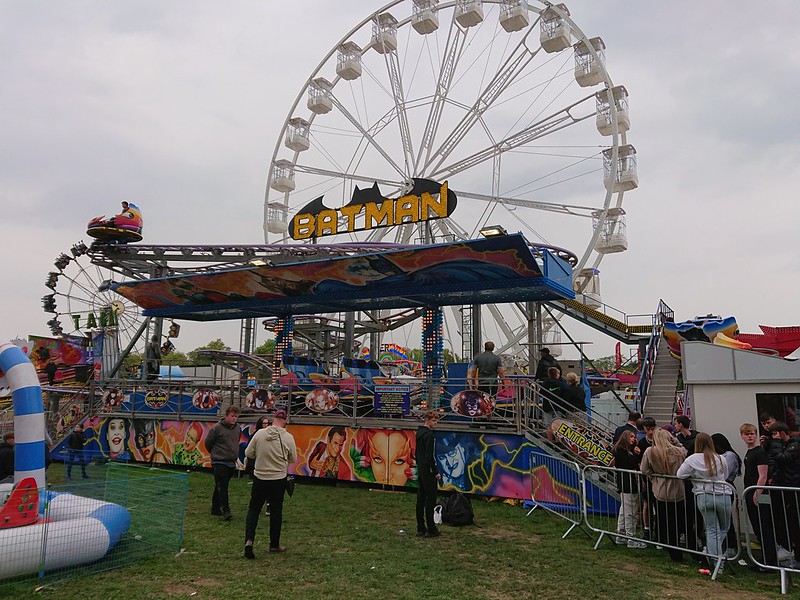 Suitably enthused by my spin on Batman, I went back to the go-gator and tried to bribe the ride-op to let me have a go. That amused him so
much that he let me on (and refused my bribe as well, letting me on for the normal £2.50).

Wooo unexpected random +5 then (2 powered tho')

Never found any wacky-worms though, so if there was one there it was hiding.

The fair is on until next weekend if anyone else is desperate for that go-gator cred. The beer festival has finished though.

The year started off pretty badly in terms of having a wrecked sleep schedule, with New Year's Day being the main culprit among others. The target for today was to visit Lakeside Shopping Centre for a small funfair they're holding that had an unridden Wacky Worm. My anticipated time for leaving the house to make this trip was 1pm. Lack of sleep at night happened. I left at 3.

Barely staying awake I make it to the Jubilee line where I sat from start to almost finish, getting off at West Ham of all places for the National Rail service to Chafford Hundred. I had my train ticket booked and ready to collect from the station, only for absolutely no ticket collection points to be seen. Immense confusion filled my mind as I paced up and down the stairs leading from the underground entrance to the National Rail platforms. Eventually I give up but not before tapping my card onto a reader at the bottom of the stairs - turns out you're never supposed to collect tickets on this line, you instead just have to tap your card at the station instead and again where you're getting off? Huh?!

Well the ticket I booked is now useless but hey I managed to get a partial refund. With that train faff out of the way I cross a bridge and find myself at my destination. I saw a Booster from the train, I could try a Super Trooper again! I wonder how good their Waltzer is? Could I ride a Ferris wheel without freaking out for once?!

Walked through the shopping center to the fair.

Coughed up a fiver.

Left and went back home.

I'm not really into writing long trip reports these days anymore, but writing something up about a cred run I did an hour ago is no biggie.

The funfair organized by Slovenia's largest funfair operator Lunapark Müller is back to Ljubljana and this time round it did feature a cred, so I squeezed in a visit on this very warm day in May. The temperatures outside are close to 30°C today and to make the feel even more Summer-like, the air-conditioning in my car refused to work. Luckily the fair is only a 20 minute drive from my house, so it wasn't too exhausting to get myself there.

At the fair, there was a selection of different rides owned by Müller and a few that were rented from foreign showmen from places like Netherlands and Slovakia (judging by the license plates)

I wasn't particularly interested in doing any of the fairly expensive flat rides (I believe that Afterburner style ride cost about 8€ to ride), so the sole reason for my visit was this fully licensed Jumanji themed oval coaster built by the mysterious Eastern European manufacturer Yamasakutalab and owned by an unknown Slovak showman. Coaster-count had this down as being owned by Müller, but the trailer that the station was sitting on had Slovak license plates and the operator didn't speak any Slovenian, so I assume this is one of the rented rides.

It was a fun little coaster. Obviously it didn't do much, it went around for ages (at least 10 laps, but honestly, I stopped counting at some point) and the strawberry scented smoke machine in the station was a nice touch. The ride also appeared to be in very nice condition with the track likely receiving a fresh lick of paint before coming to Slovenia.

There was another coaster that was due to be present at the funfair, but it was stored in an area that couldn't be accessed by the general public behind Jumanji.

The ride in question is a rare Soquet powered coaster called Tokyo Express that Müller purchased from a Belgian showman Deville ahead of the 2022 season. I'm not sure quite why the ride wasn't set up for the funfair, but it wasn't a spite for me considering that I've ridden it in Hasselt a few years ago under its former owner. Hopefully they'll manage to get it running for the future fairs, though.