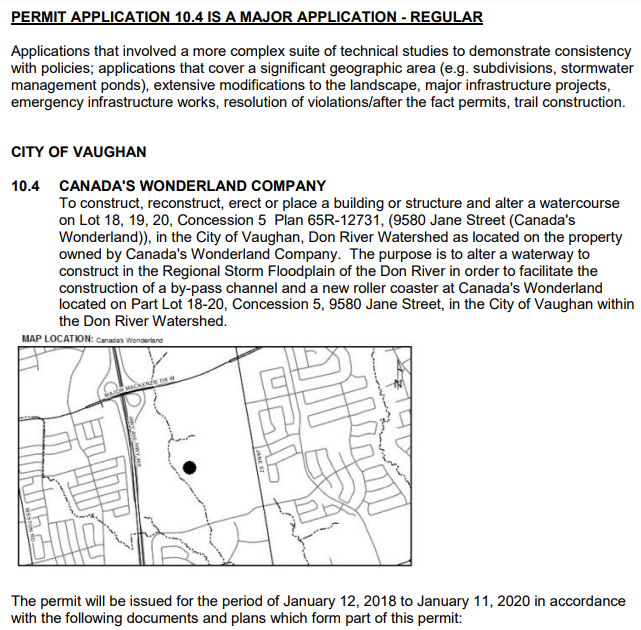 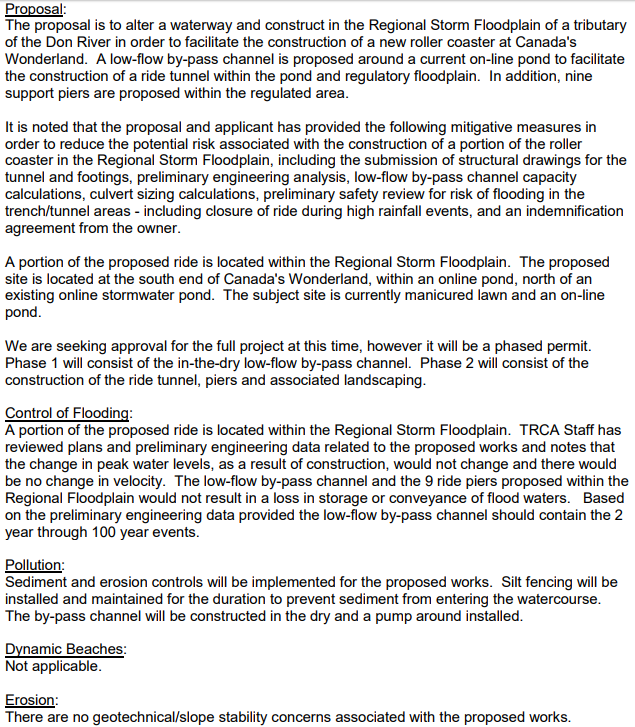 tl;dr: CW is planning to build a new roller coaster for 2019/2020. Right now, they've only submitted the application for moving some water to make way for the ride. The map shows that this would be located on or near the old Sky Rider plot. This ride would include a tunnel through the lake, as well as some low-laying sections of track over the water. No word on the type/make of the ride, but based on what the application says, it looks to be on the high thrill-end of things.

I honestly have no idea what this could possibly be, but I know Cedar Fair like to test a new type of coaster (for the chain) at Canada's Wonderland, so I'm clueless.

But I think whatever it is, it'll be called Ziz.

Maybe it's one of the new vekoma model?
like a Shockwave layout or a Hyper space warp
both this layout features tunnels

I think it's probable that it could be a B&M, maybe Dive Machine?

I'd love to see them RMC the **** out of Mighty Canadian Minebuster, won't lie.

I know that Screamscape has been suggesting a B&M invert, but I reckon it could be a B&M flyer because of what @ATI said. I definitely reckon it'll be called Ziz though, because apparently it is part of a trio of gods; Behemoth, Leviathan and Ziz.

Staff member
Administrator
Moderator
An argument against the "Ziz" name is that the word is not as established in the English language as Behemoth and Leviathan are. It isn't as well-known as those other two, and doesn't quite evoke the image of something huge and powerful. "Ziz" sounds like the wacky sidekick from a children's cartoon featuring garden gnomes. The park would have to work a lot harder to give off the same impression with that coaster as with the other two.

Considering everything that's been said about the name Ziz in this post and the post above.....yeah, I'm alright thanks.
V

Track is on site:

Construction is already underway so it wouldn't be that surprising to see track on site.

There is a lot of land preparation and digging going on. Some footers have been poured and you can see the rebar metal that they turn into footers being assembled,
From TPR:

They have removed a couple of track sections from Vortex for vehicle access during the work.

Now that construction is underway, I've moved this to Coaster Construction.

Wait, so Vortex is being removed?

ATI said:
Wait, so Vortex is being removed?
Click to expand...

No they just took a few track parts out so construction vehicles can access both parts of the site. It is only a temporary measure. The track will be reassembled. You can see the Vortex track sitting next to the new B&M track in the video VTCGA5 posted.

I can't really tell whether the track is red or brown from that video, but it will certainly be interesting to watch nonetheless. I don't reckon it will be a Dive Coaster myself, but I can see why someone would. I reckon it might be a B&M flyer, as Canada's Wonderland is somewhat of a testing ground for Cedar Fair as far as new rides are concerned, and a flyer is the only major ride type from B&M that Cedar Fair hasn't built yet, but they might realistically build in the future. Cedar Fair haven't built a B&M sitter yet, but as there are only 4 of those worldwide and the floorless basically does the same thing, I don't see Cedar Fair investing in a B&M sitter. I suppose there is always a B&M launch coaster of some form to consider. Could be B&M's attempt at countering F.L.Y if this is a flyer! Cedar Fair also haven't built a B&M family coaster yet, but I think that would be a bit of an anticlimax after all this buildup. Anything is possible, and I shall be watching this with great interest over the next couple of months!
B

Cedar Fair haven't built a B&M sitter yet, but as there are only 4 of those worldwide and the floorless basically does the same thing, I don't see Cedar Fair investing in a B&M sitter
Click to expand...

If they even make those any more ... Let's face it, sitters and floorless are the same "model", one just has updated trains.

I think the size of that thing is the reason why people say it is a dive coaster. It looks huge. I didn't do any measurement, but I too imediately thought "dive" when I saw it.
A

Whatever it is, another B&M will be welcomed to CW in my opinion.

I was still hoping CF's new relationship would mean CW could build a Topper and have a Wooden coaster that was actually good, but that would've just been a dream come true.