Hi guys. Today, me and my parents went to Blackpool Pleasure Beach for their Late Night Riding event. Now, we had been staying in the very nice Big Blue Hotel last night, so we were able to gain quick entry via the hotel entrance, which provided a great starting view: 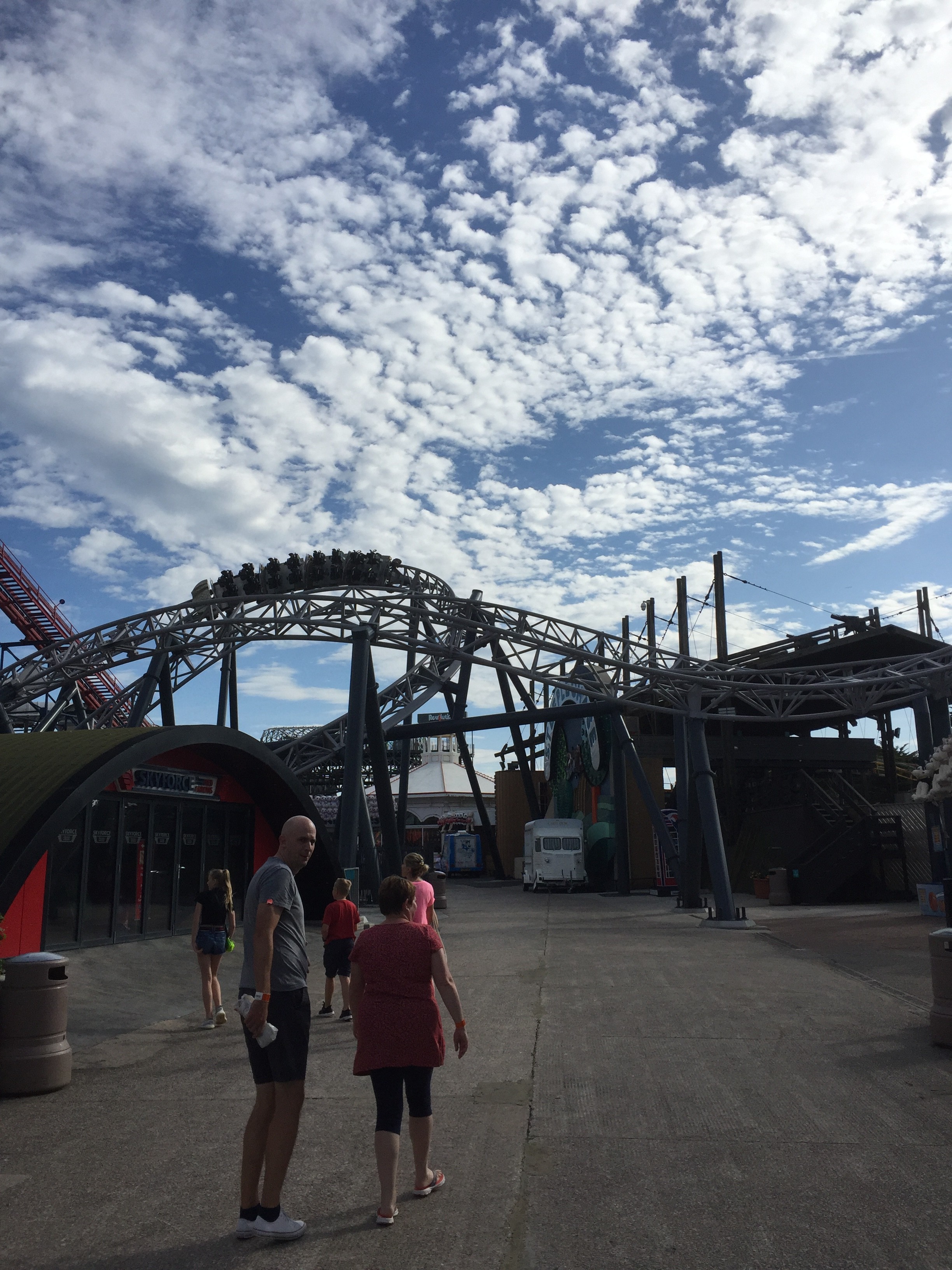 After getting into the park, we got into the queue for...
Big One
Now, we had a feeling that the Big One would get pretty busy throughout the day, so we joined the queue for it early. I must say I rather like the new soundtrack with ride facts embedded into it! So, how was the ride itself? Well, it was very fast-paced, and my parents loved it, but as with the last time I rode it, I personally found it a bit too rough to enjoy. That location is quite an asset for the ride, however, and I probably shouldn't criticise it, as it was one of the first hyper coasters: After the Big One, we got into the queue for...
Avalanche
Now, Avalanche was a ride we rather enjoyed last time, so I was looking forward to reriding. I've always rather liked the atmosphere around Avalanche with the Swiss buildings and music, so I admired this while we waited. So, how was the ride? Well, if anything, it's grown on me since I last rode it; for a family coaster, it was really rather whippy and had great pacing! I found it to be such a fun little ride, and my parents seemed to agree with me! In fact, if you want my controversial opinion, I think it may well be my 2nd favourite Blackpool coaster behind Icon: 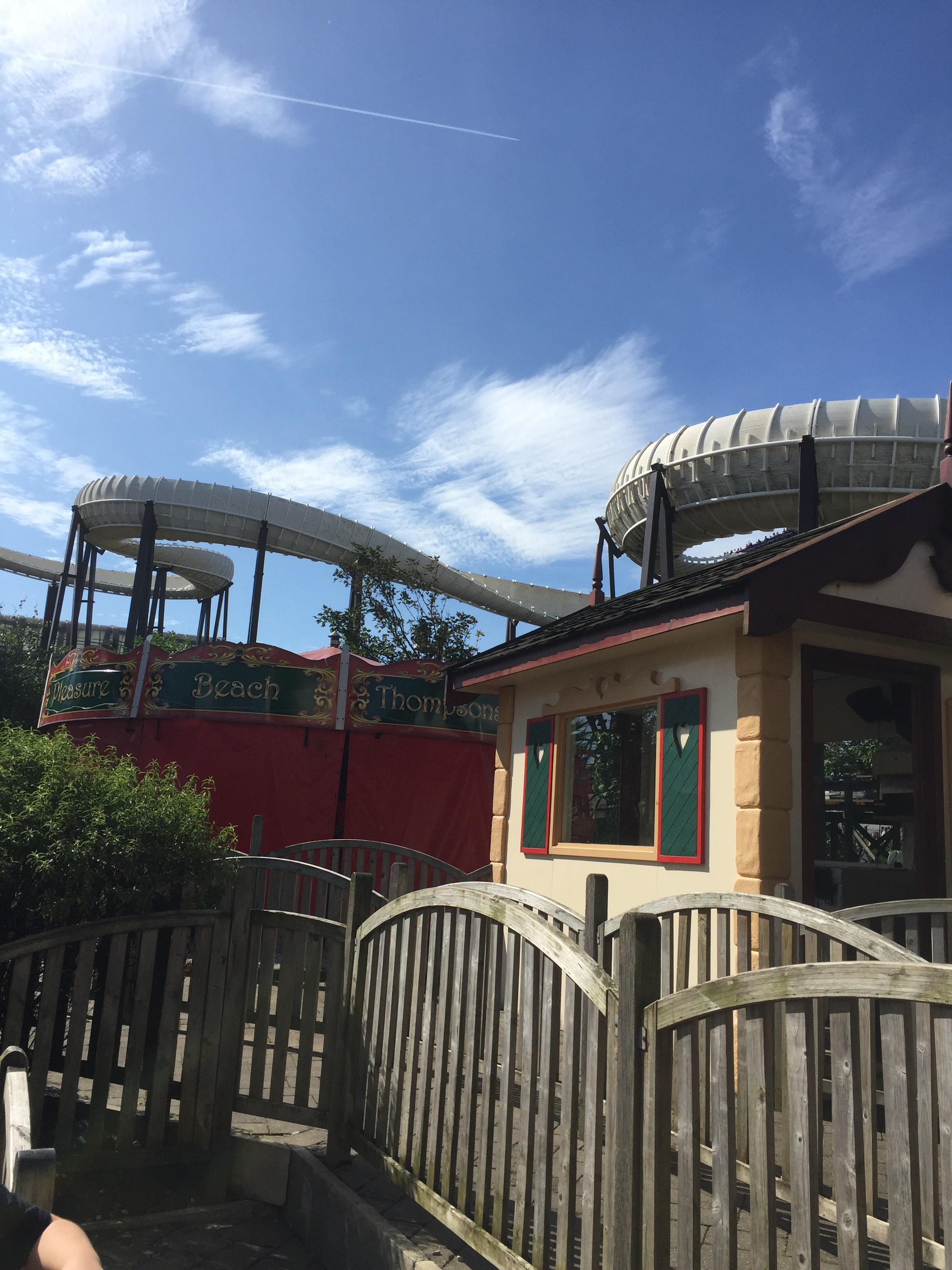 After a fun ride on Avalanche, me and my dad got into the queue for...
Revolution
Now, I seem to remember Revolution being a perfectly fun ride last time I visited Blackpool, so I thought it might be worth a ride. By now, queues had begun to get quite long, so we waited around 45 minutes for Revolution. So, how was the ride? Well, my dad said that it wasn't as good as Thunderlooper at Alton Towers, but I thought that Revolution was a good little ride for what it was, with some good forces in the loop and surprisingly good airtime off the launches! I'd also say it was quite smooth for a 1979 Arrow: 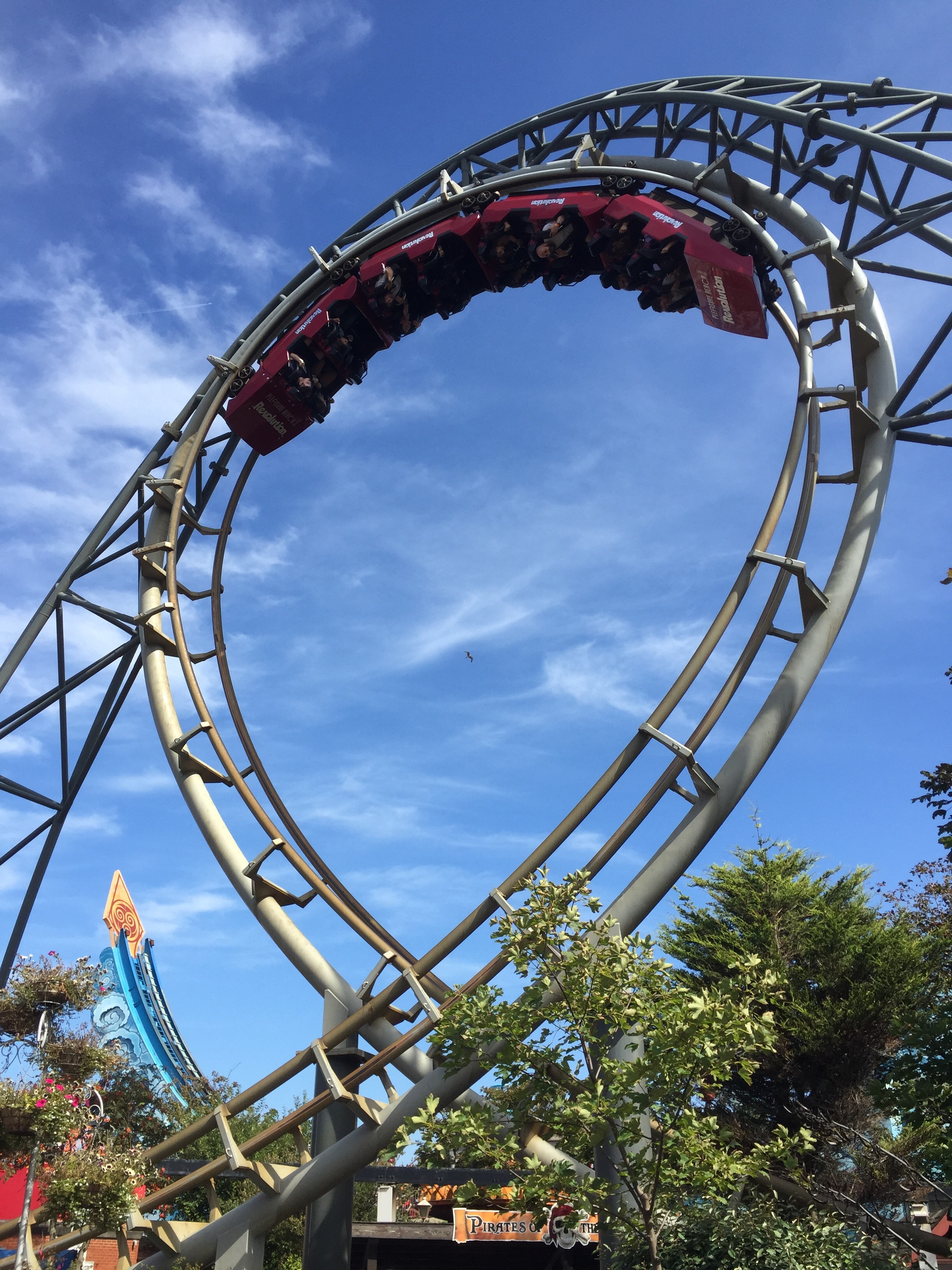 After Revolution, we met back up with my mum, who fancied a wooden coaster ride, so we headed over to ride...
Nickelodeon Streak
Now, Nickelodeon Streak's queue was stretching out of the actual queue line, so we were predicting a long wait, but we decided to queue for it anyway as we remembered it being quite fun last time. This wait turned out to be around 80 minutes following a short delay, but we got on in the end. So, how was it? Well, I wouldn't say it was quite as good as I remembered it being, but it was still a fun little family woodie, in my opinion: 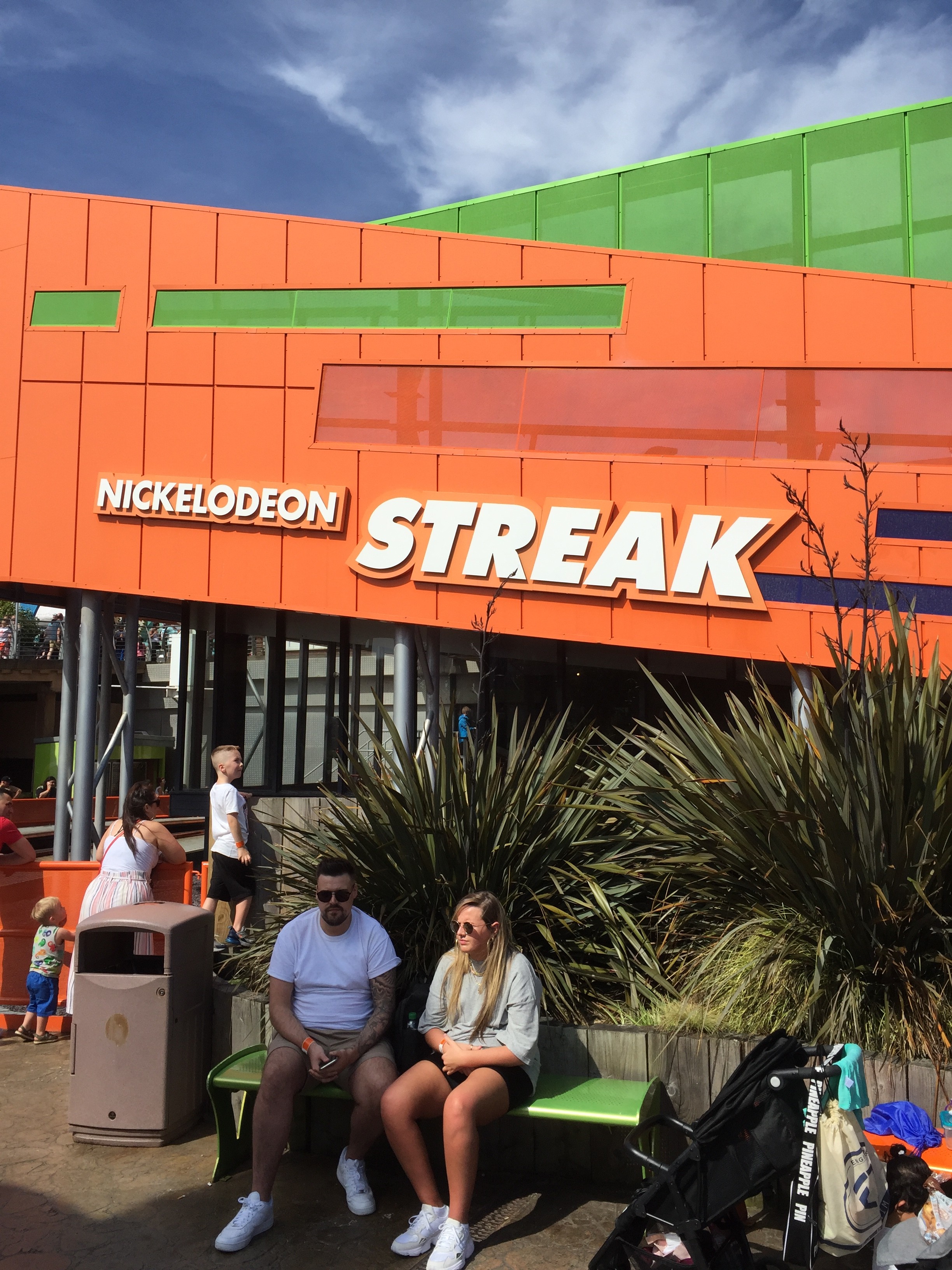 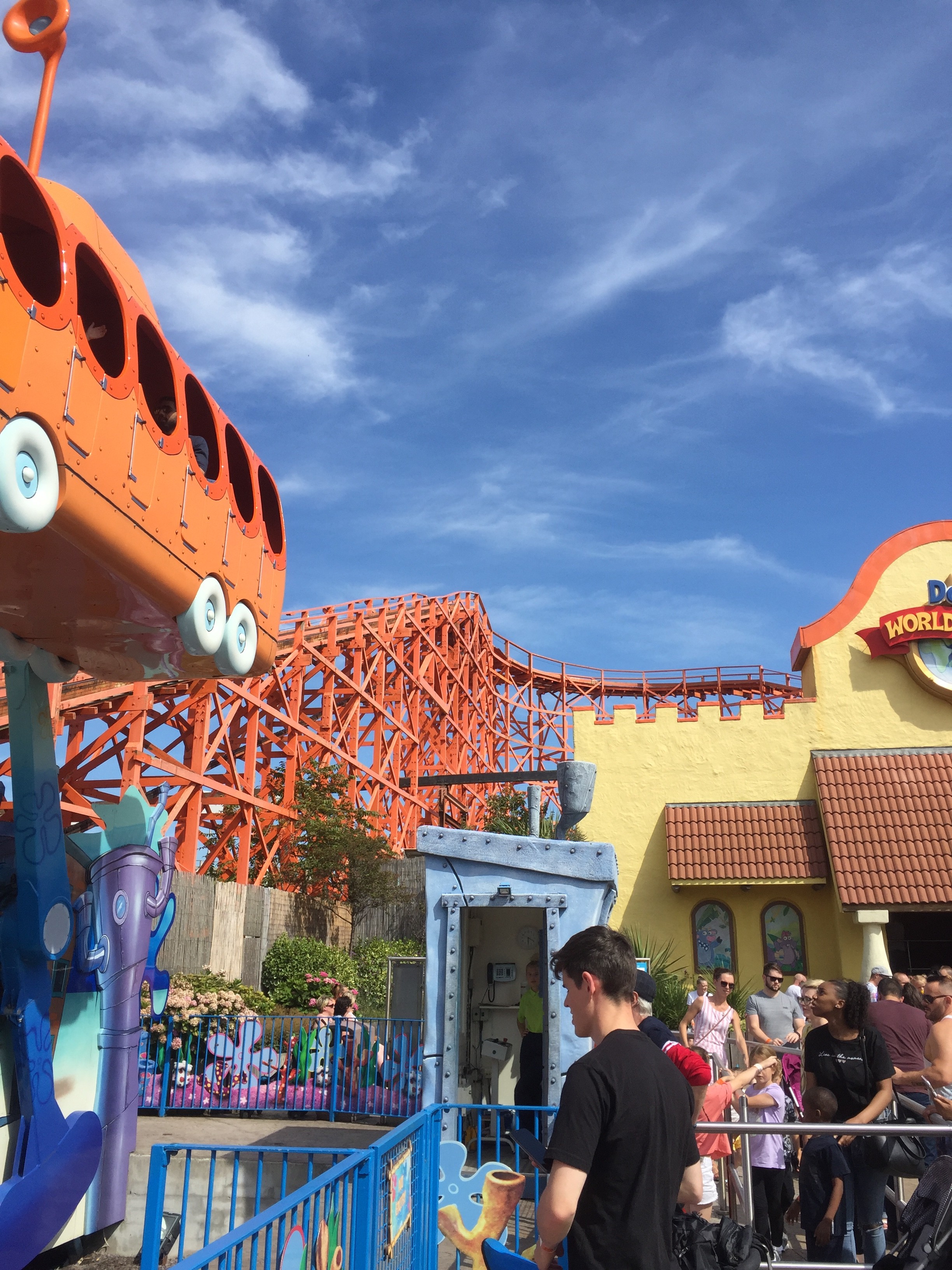 After Nickelodeon Streak, we headed over to ride a particular favourite of mine from our last visit...
Icon
Now, Icon's queue was also stretching out of the entrance, but Icon's queue always moves quickly and it was my favourite ride from our previous trip, so we joined the queue. After only around a 30-40 minute wait, we were on. So, how was it? Well, I was seated in row 5, and it was just as fantastic as I'd remembered! The ride's smoothness has held up very well, and the whip and ejector airtime were both fantastic! I was kicked out of my seat with ejector around every corner, and overall Icon definitely cemented its place as my favourite UK coaster and overall number 2!

After a phenomenal ride on Icon, we made our way over to a ride that I missed out on when I last visited Blackpool that I had been heavily anticipating due to its high acclaim...
Valhalla
Now, getting on Valhalla had been one of my main priorities for this trip to Blackpool Pleasure Beach after I missed it last time. I'd wanted to ride Valhalla due to its heavy critical acclaim, including from the Golden Ticket Awards, where it won the award for Best Water Ride! Now, Valhalla may well have been the longest queue of the day, clocking in at close to 2 hours overall. By the time we were at the end of the queue, we were all extremely hot, but as we would find out, Valhalla would be the perfect antidote to our high temperatures! So, how was the ride? Well, I'm not entirely sure where to even start with Valhalla! I was expecting a very wet ride, but what I was not expecting was to have my feet submerged in 2-3 inches of cold water from the second I boarded the ride, and that was only the beginning of Valhalla's drenching tricks! The whole ride was a very long one, with many soaking drops as well as a plethora of fantastic effects! Overall, Valhalla was a fantastic water ride that definitely lived up to the hype, but it was so, so wet that I'm not entirely sure if I'd ride it again on my next visit to Blackpool; I think it would have to be a properly sweltering day like today was! Valhalla was a very surprising ride; let's just say that Blackpool was not the place I was expecting to find a competitor to Bilge-Rats at IOA as the wettest water ride I've ever done: 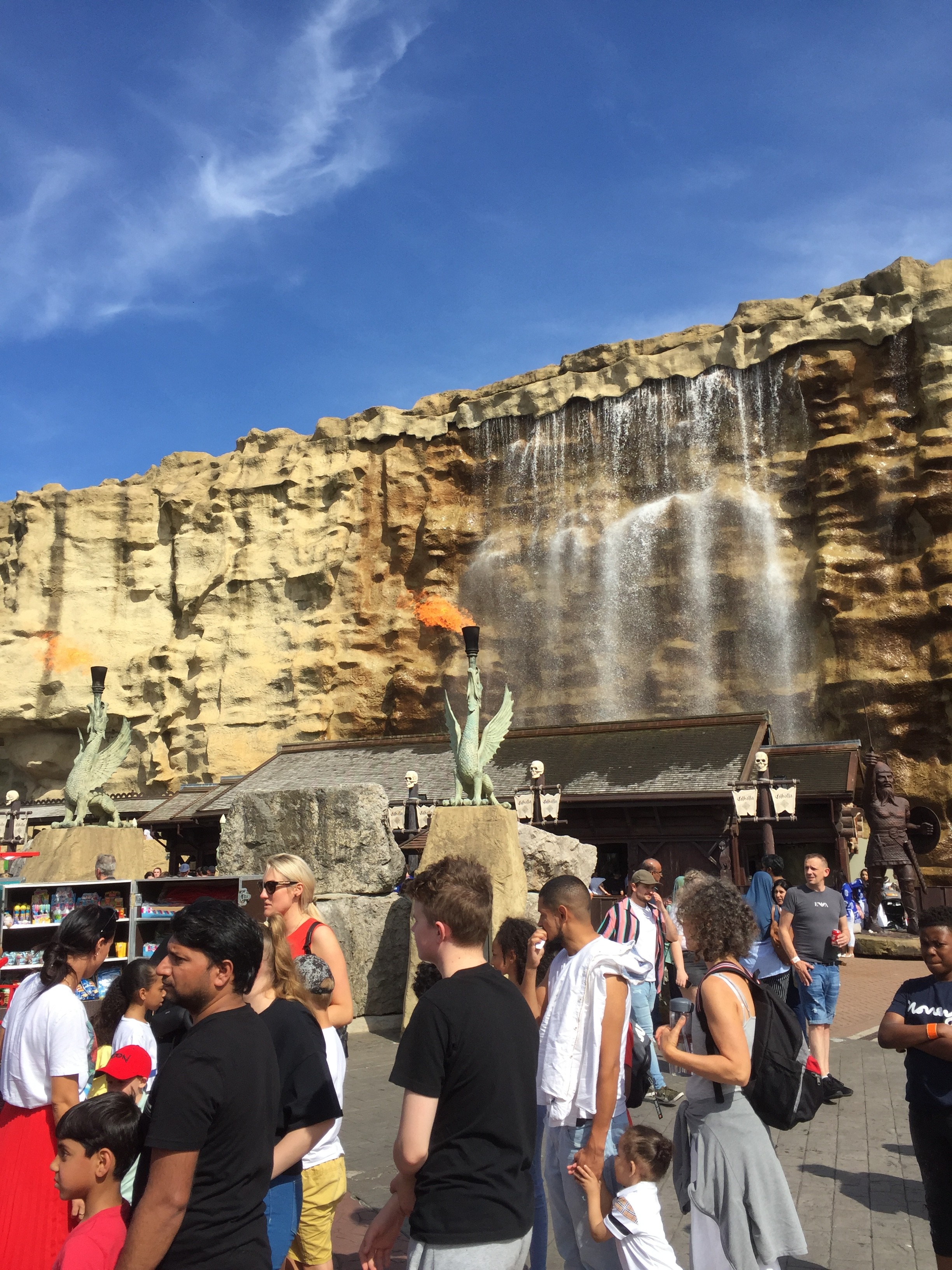 After our soaking on Valhalla, we left the park for an hour or two to have some food in the Big Blue Hotel. We went back into the park through the main entrance at around 6pm: Our first ride upon re-entering the park was...
Big Dipper
Now, Big Dipper actually had quite a short queue compared to others we'd waited in, so we joined it. So, how was the ride? Well, I still found it quite a good woodie; I must admit that it was a little rattly, but I wouldn't say it was too rough for me to enjoy, and I have a low roughness tolerance. Maybe I just ride Big Dipper in good seats or something? My parents both enjoyed it, as they always seem to enjoy an old wooden coaster: 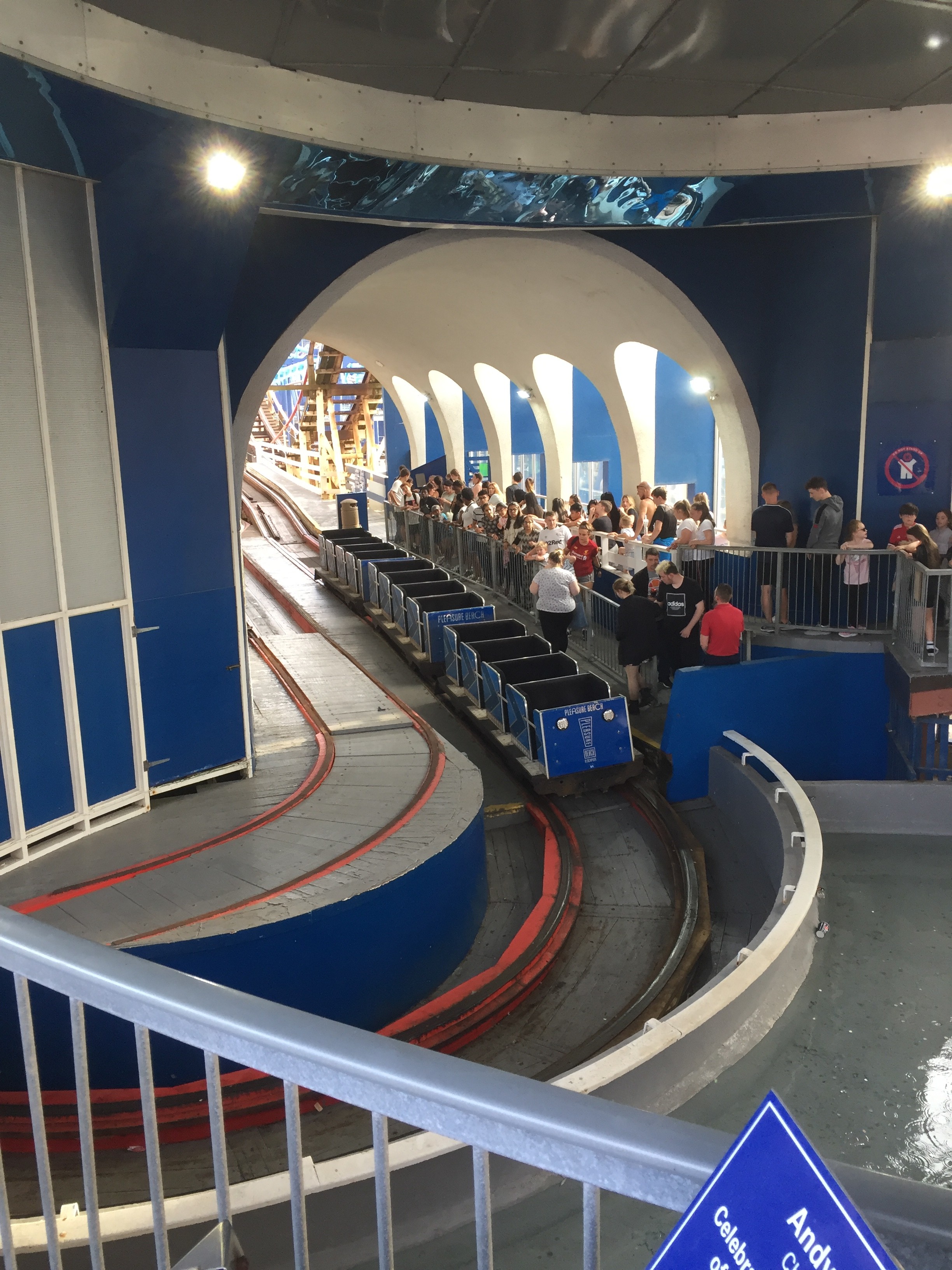 After Big Dipper, we headed back to the Big One for a dusk ride; we were towards the back and got some strong laterals on the drop. I must say, the Big One's views are even nicer at dusk: 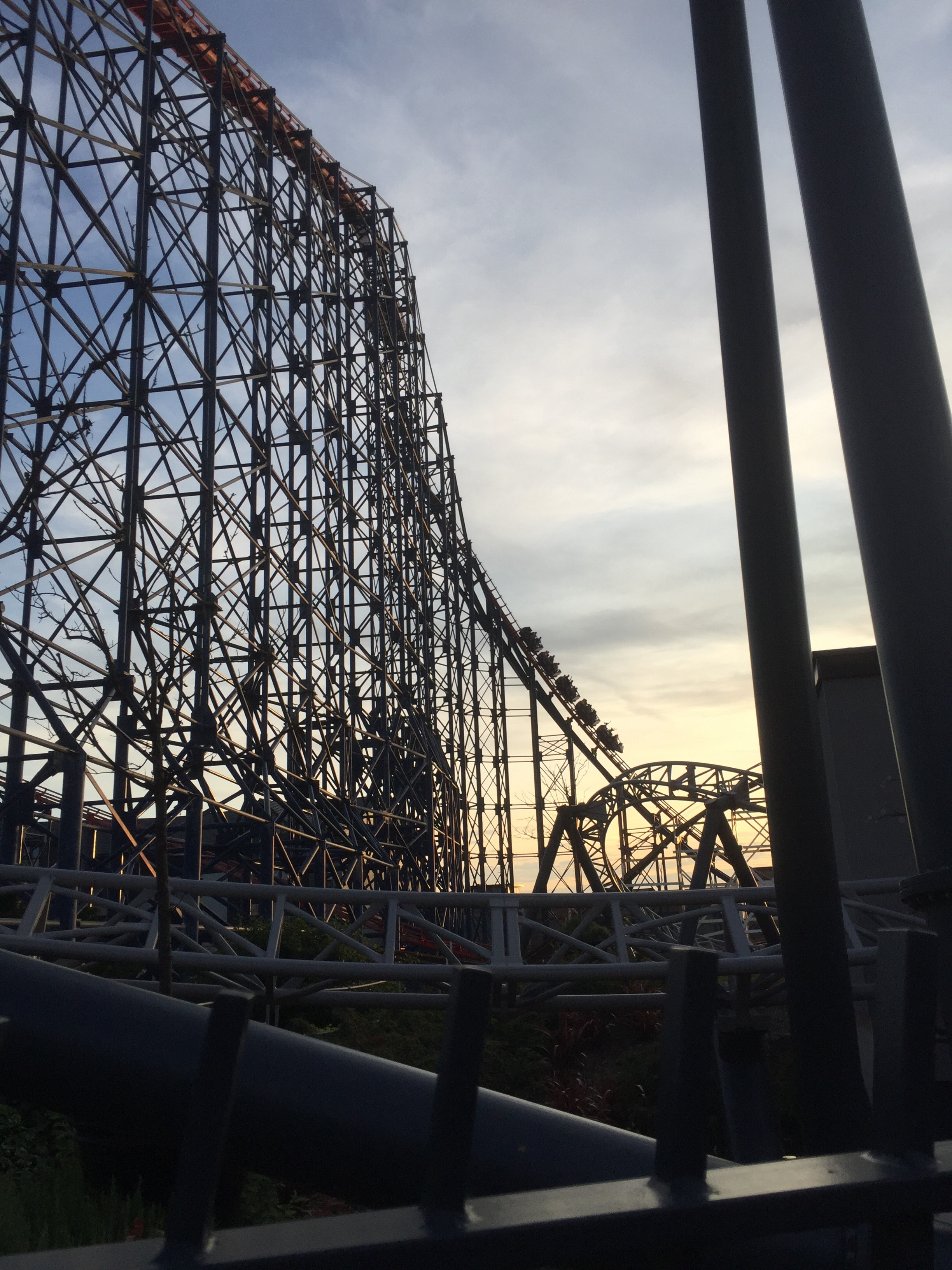 We then went for a dusk ride on Icon; this time, we were seated in row 7, and the ride was relentless with some fantastic ejector airtime! A phenomenal ride! We also got the treat of having the ride's lighting on while we were going round: 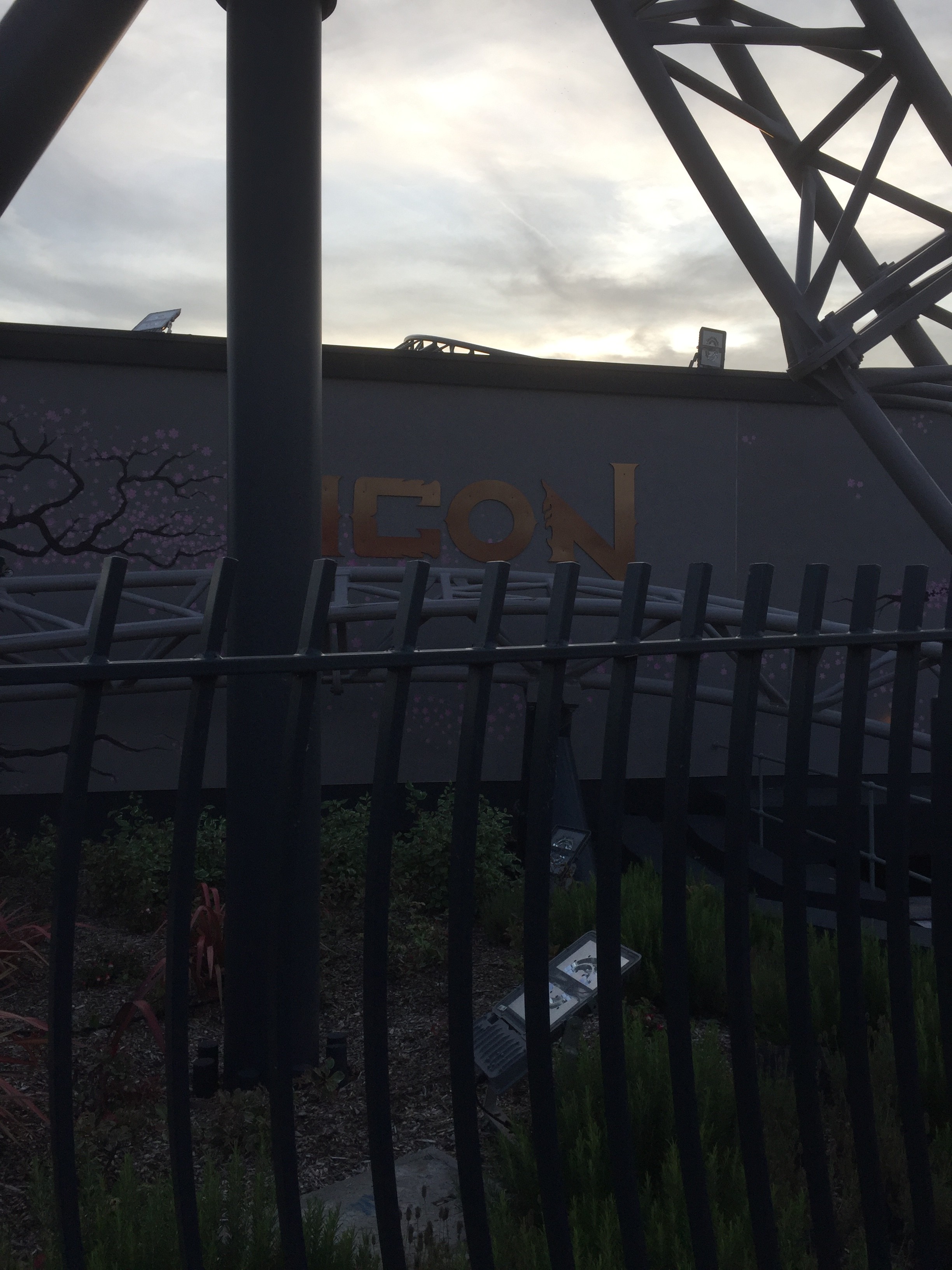 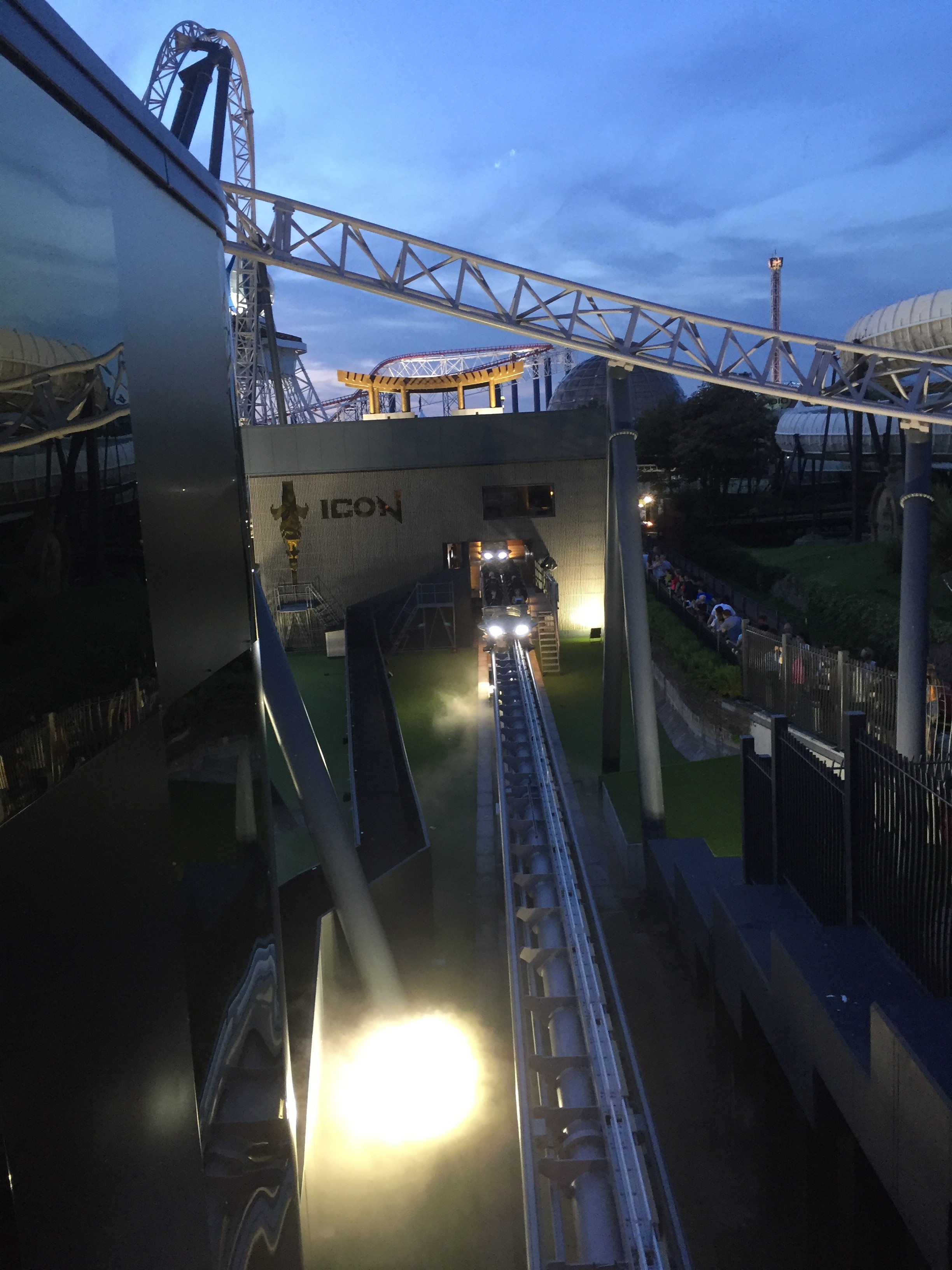 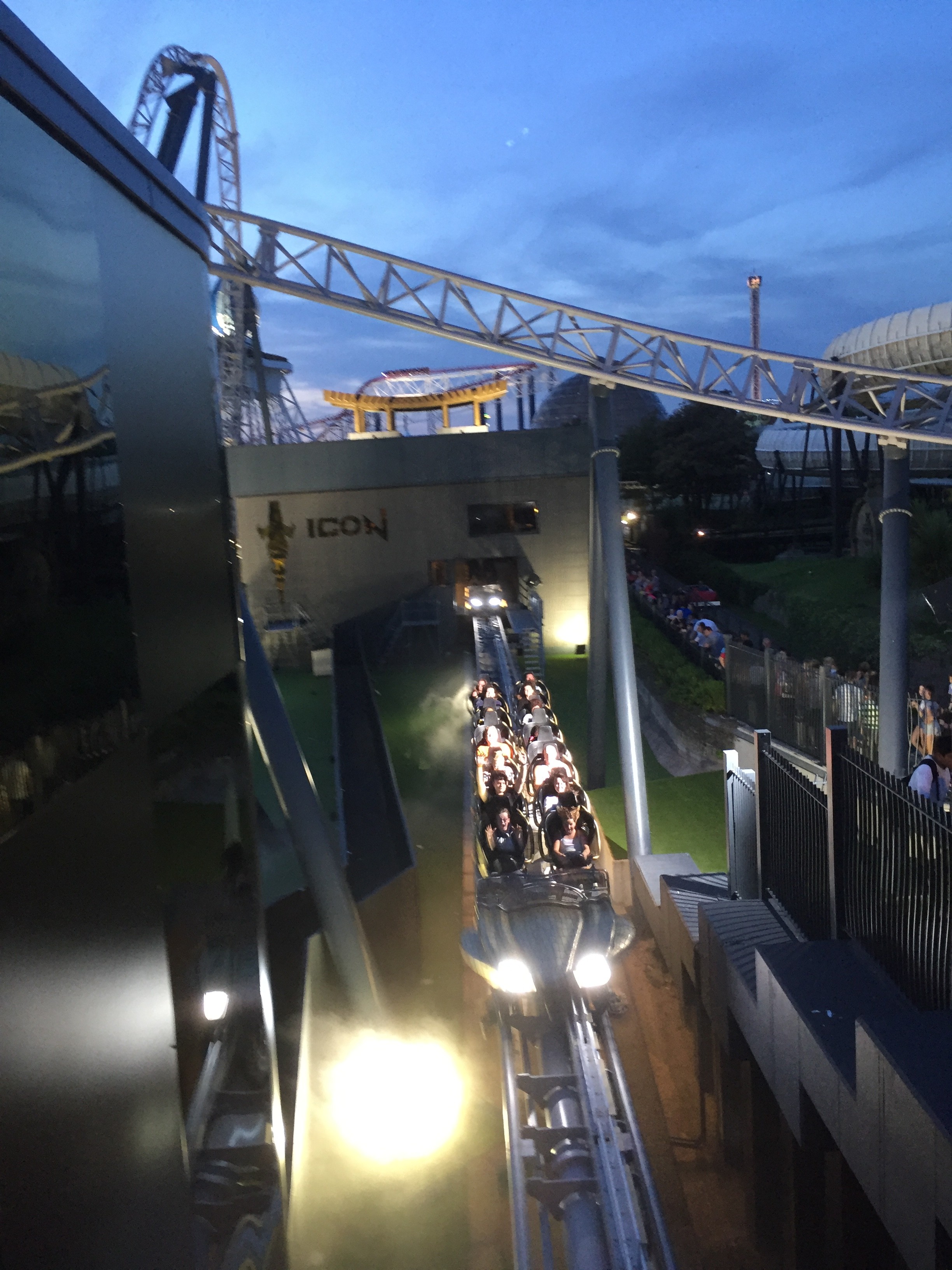 After that, we joined the queue for a night ride on...
Grand National
Now, Grand National actually had quite a short queue, so we joined it. By the time we boarded the ride, it was fully dark, so I'd call it a night ride as opposed to a dusk ride, personally. So, how was it? Well, my parents loved it, as they love an old wooden coaster, but I found it utterly brutal; I thought it felt even rougher than last time! The layout is very good, but I just find it too excruciatingly rough to enjoy as a ride, so much so that I actually think it might be one of my least favourite coasters, I'm afraid. I suppose I can't expect an 80 year old wooden coaster to be smooth, and I can get the appeal, but as someone who likes smooth, fun, rerideable coasters, I don't think Grand National is for me at all.

After Grand National, we ended our day with a nice relaxing ride on...
Wallace & Gromit Thrill-O-Matic
Wallace & Gromit was only a short walk from Grand National, so we joined the queue for it. I fancied riding one of Blackpool's more unique dark rides, and I always quite liked Wallace & Gromit, so I was looking forward to giving it a try. So, how was it? Well, I thought it was a very fun little dark ride, with some nice scenes and animatronics; a very uplifting and relaxing end to a fantastic Blackpool day: After Wallace & Gromit, we headed back to our hotel and said goodbye to Blackpool Pleasure Beach for the night, admiring the beautiful lighting as we left: 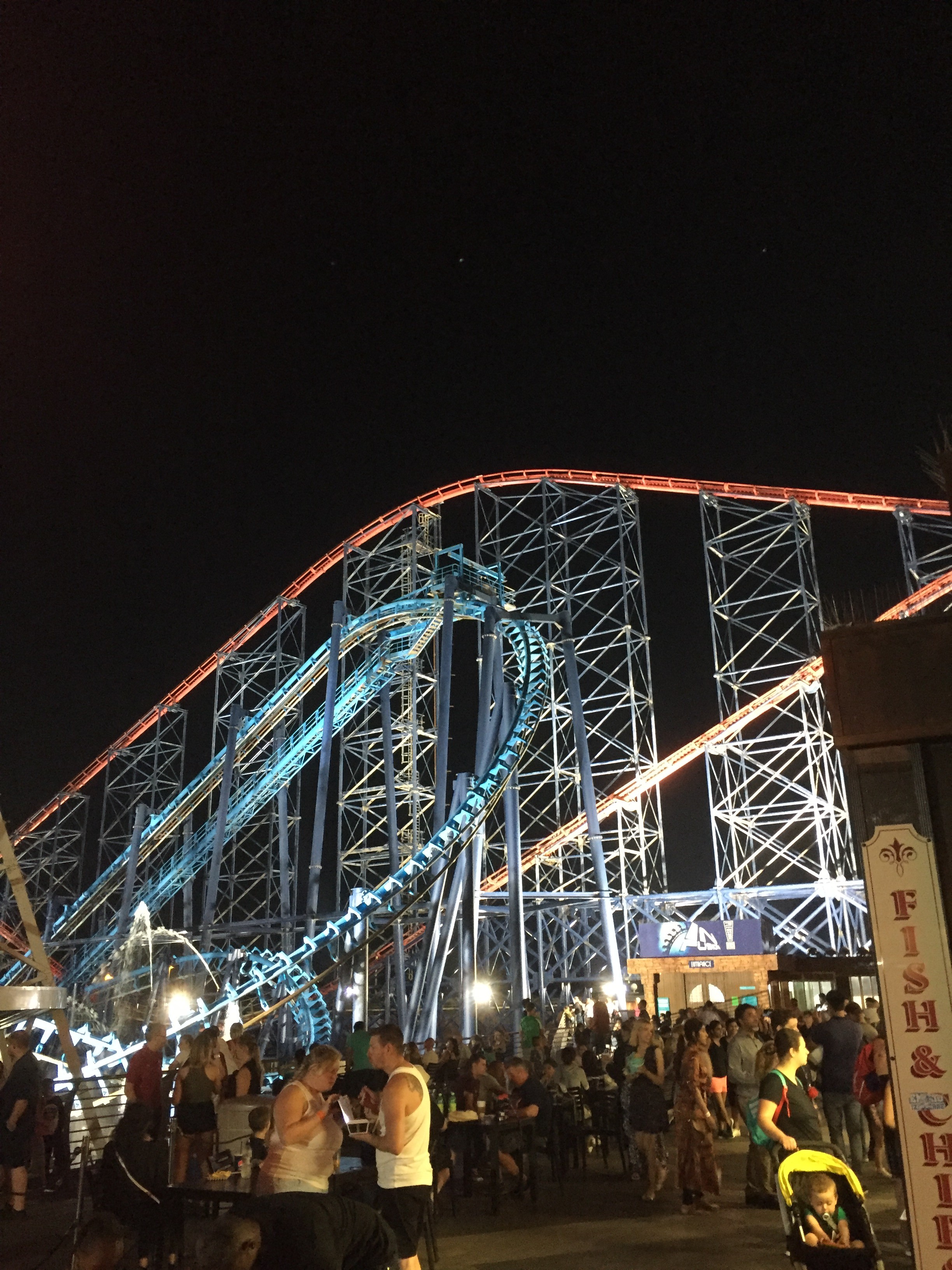 So, in conclusion, we had a wonderful day at Blackpool Pleasure Beach! I already loved the park, and I'm so glad I was able to get rerides on some of the park's coasters as well as experiencing some new attractions I'd never experienced before! I hope you all enjoyed my report!

Must have been a different Big One than the one I know...

A MattN trip report in a nutshell:

Hixee said:
Must have been a different Big One than the one I know...
Click to expand...

Well, the pre-MCBR section was quite fast, at least! I don't enjoy the Big One as much as some other coasters because I find it too rough for my personal taste and somewhat lacking in airtime, but I have to admit that the pacing is very good; on our first ride, I even greyed out a little on the first drop! Oddly, this didn't happen on our second ride!

Hixee said:
A MattN trip report in a nutshell: