Hi guys. We returned to Alton Towers today, 2 months after our last visit in July. I was hoping to get back on the rides that we didn’t get on last time, so I was looking forward to it.

Prior to visiting, I had a feeling that Wicker Man might be shut, and this sadly turned out to be the case. While this was disappointing, what with it being my comfortable favourite ride at Alton, it can’t be helped: 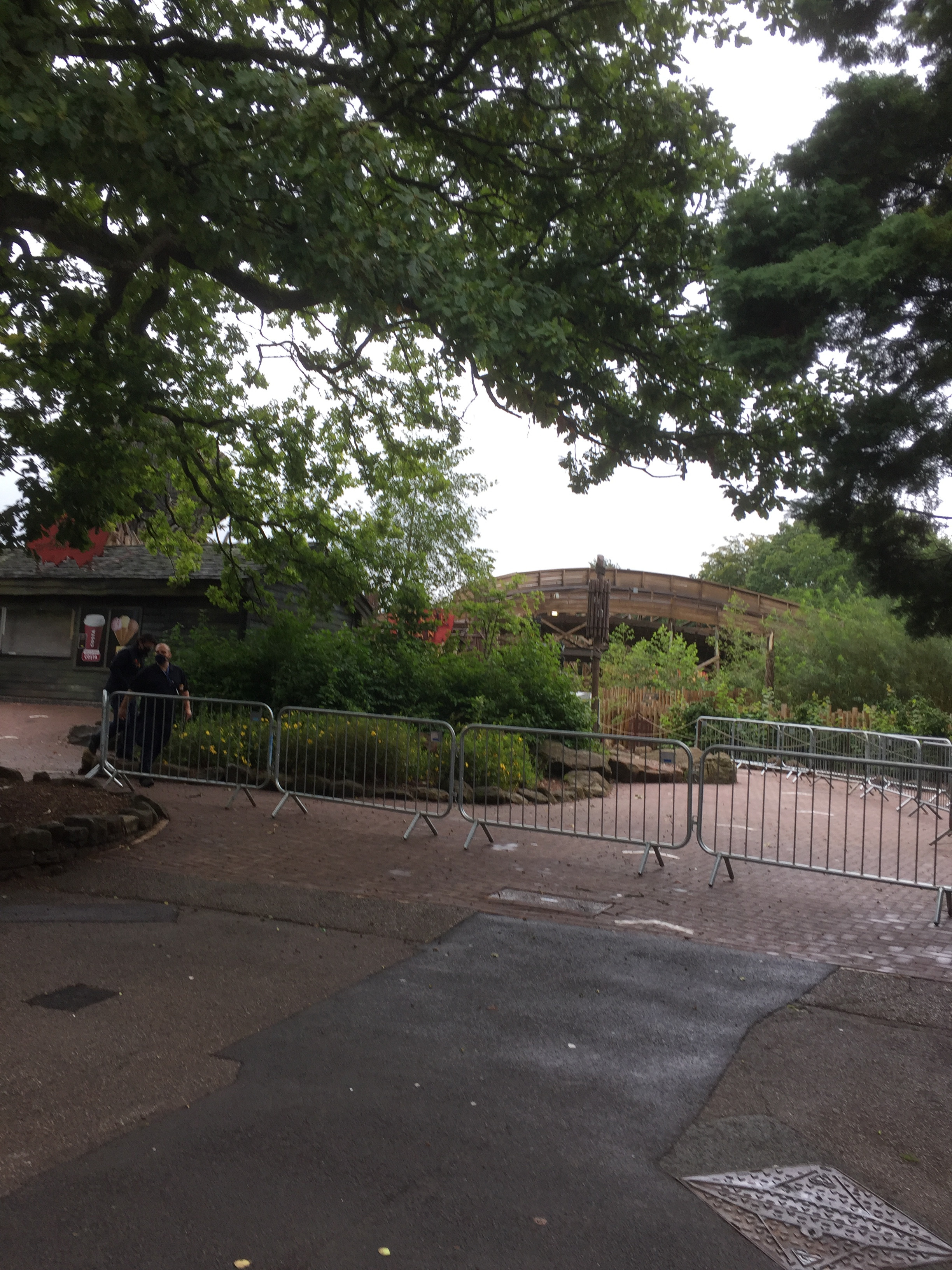 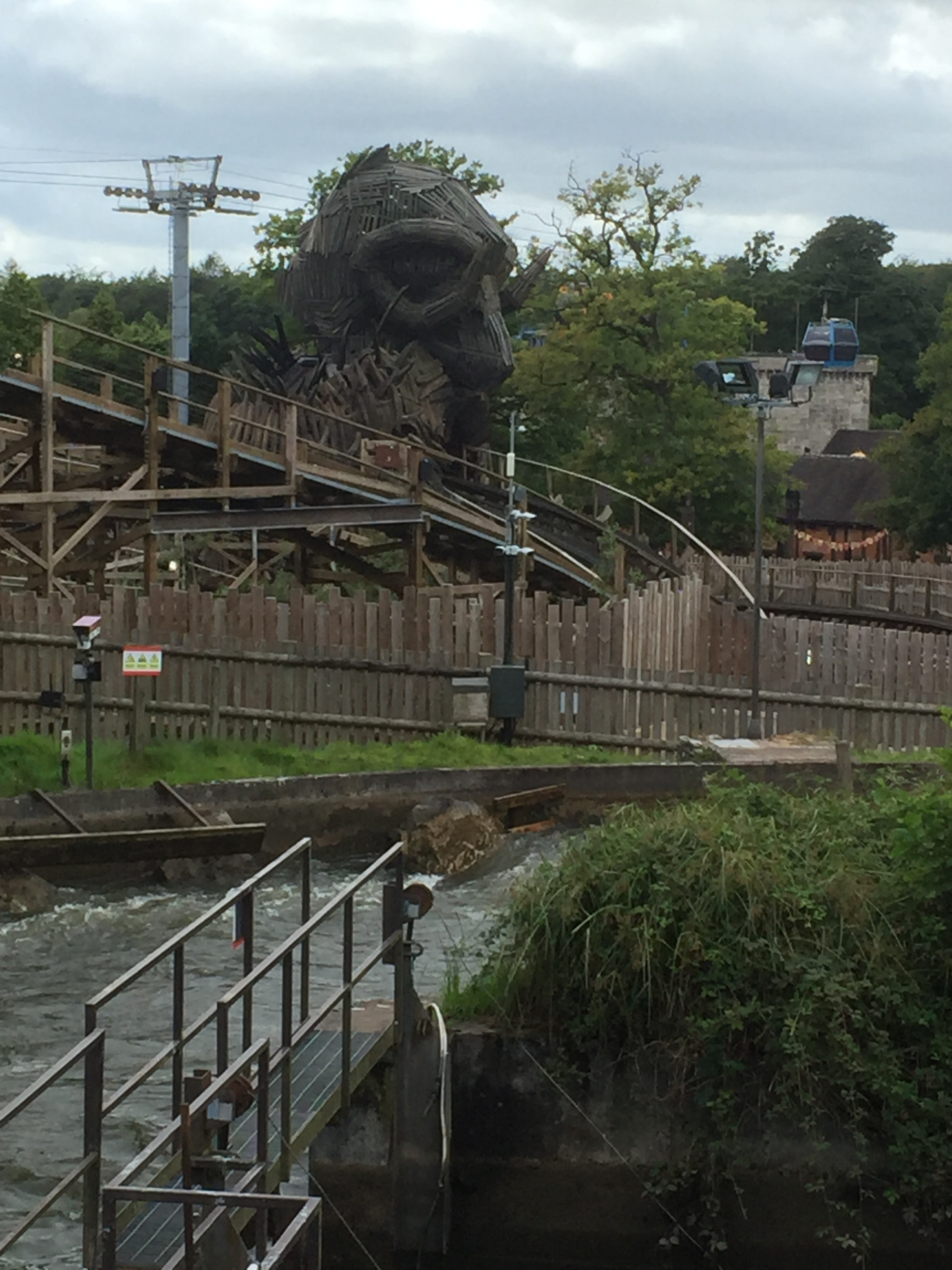 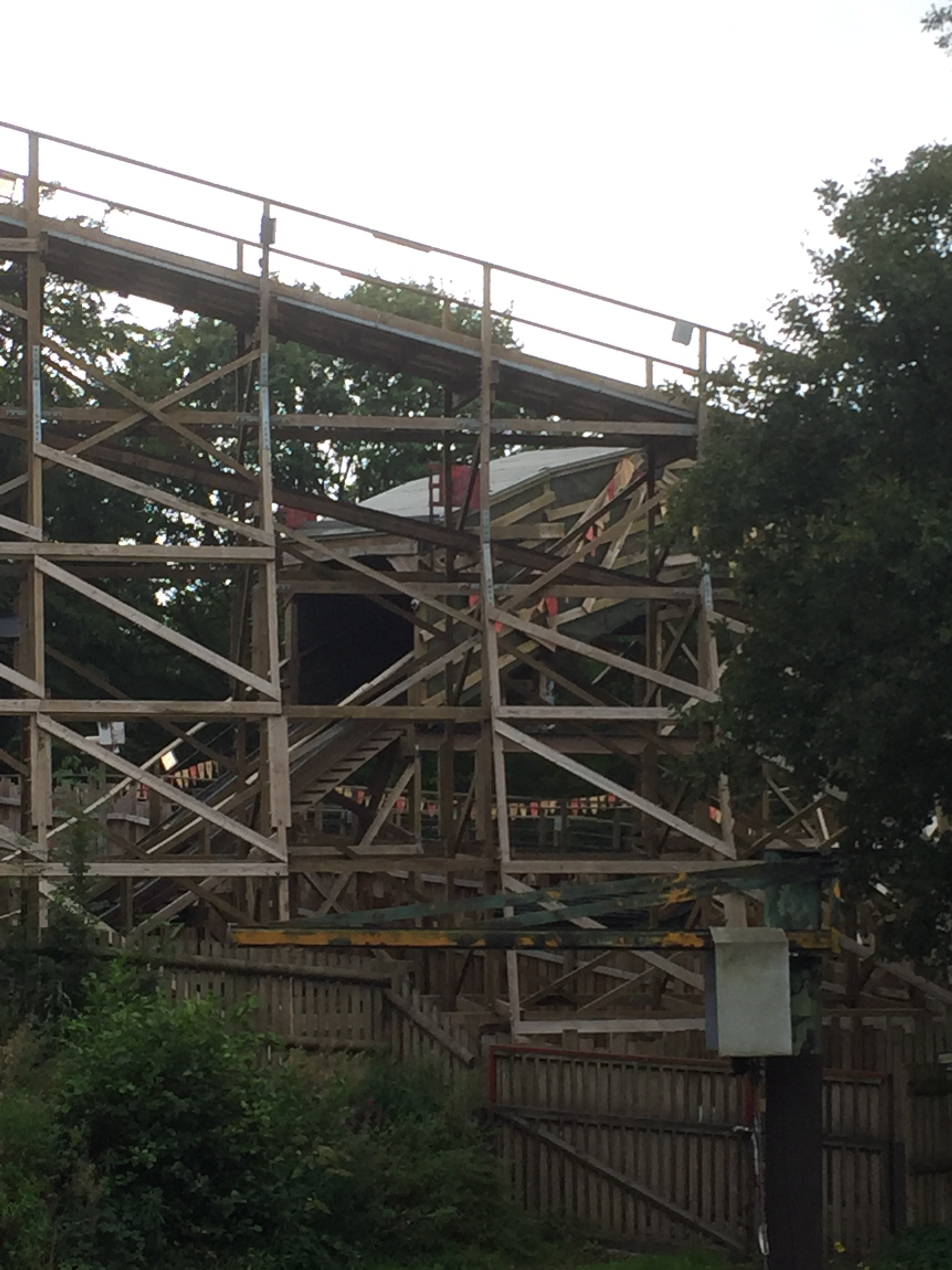 In terms of rides that were open, we decided to start our day off in Dark Forest, as we didn’t even venture into this part of the park last time...
Rita
Rita’s queue was practically walk-on, which is always a bonus, so we joined it. Now, I hadn’t actually ridden Rita for 4 years prior to today, with my last ride being in April 2016. It was my least favourite roller coaster at Towers prior to today’s ride; I remembered it as having a fantastic launch, but the rest of it being very rough. So, how was it after 4.5 years of not having ridden? Well, I certainly hope my next ride is far sooner than 4.5 years in the future, because I’ve got to say, it was far more enjoyable than I’d remembered! The launch, while not quite up there with Stealth last month, was decently strong, and there was more airtime than I’d remembered! As for the ride’s smoothness; there was a little bit of a vibration, but it was honestly far smoother than I’d remembered! It didn’t really detract from the ride for me, and I have an incredibly low roughness tolerance; it honestly wasn’t painful at all for me! Smiler was far rougher on my last ride, and I’d even say that Nemesis’ ear bashing sometimes leaves me with more pain! So on the whole, while Rita still isn’t one of my all-time favourite coasters, I was thoroughly impressed by it today, and I wouldn’t have been averse to another ride had the queue been shorter: 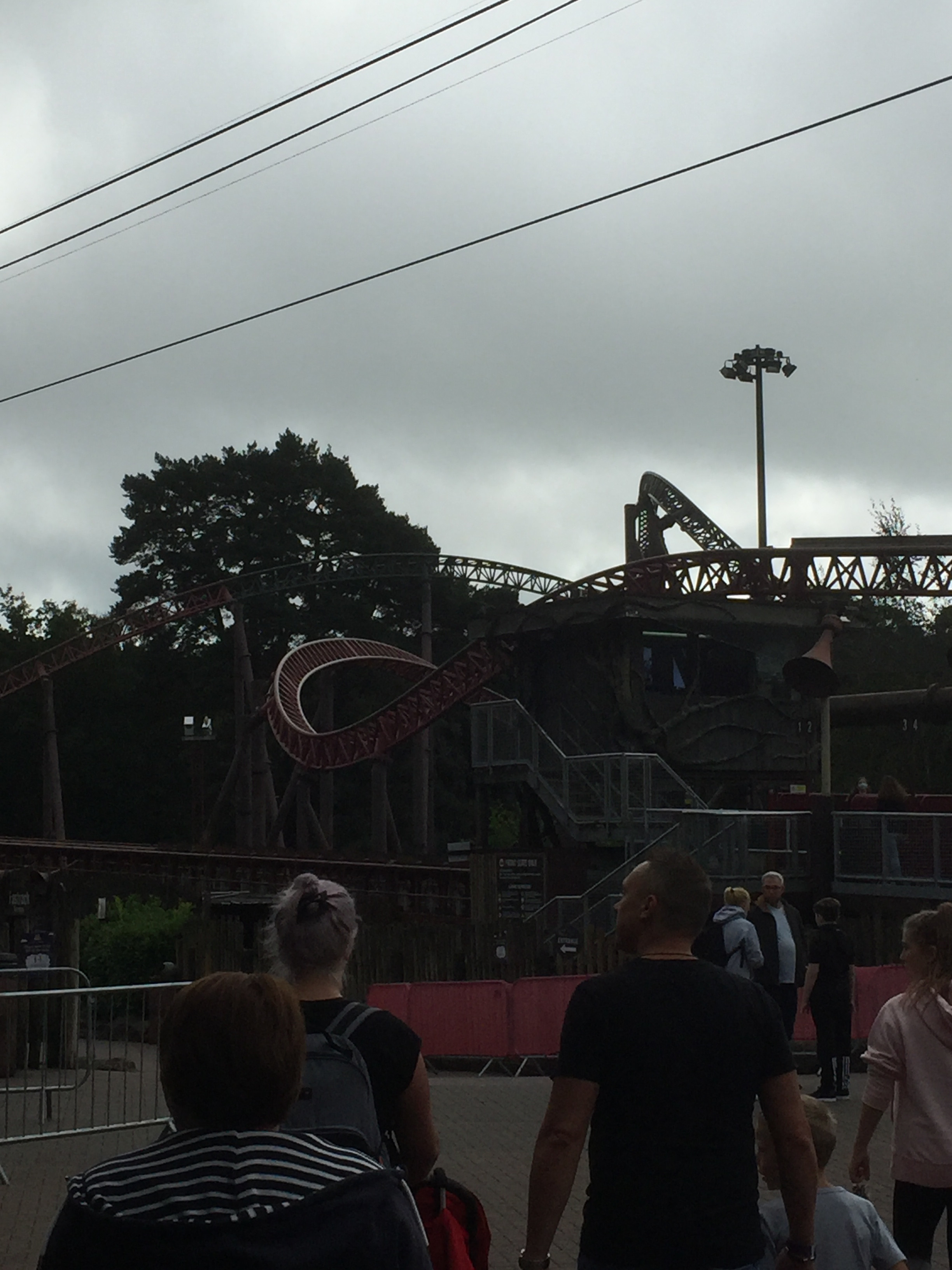 Next, we moved onto the other Dark Forest coaster...
Thirteen
Thirteen had just come back up from its deep cleaning, so we joined the queue. It was listed as 0 minutes when we were about to join the queue, but it later turned out to be 45, and the app changed to reflect this once we were further into the queue. So, how was the ride? Well, for the first time ever, I actually got batched into the front row, and it was really good fun, although I thought it possibly felt a touch slower than when I last rode. That being said, I did still get 1 or 2 nice pockets of airtime, and the drop & backwards section are always a laugh: 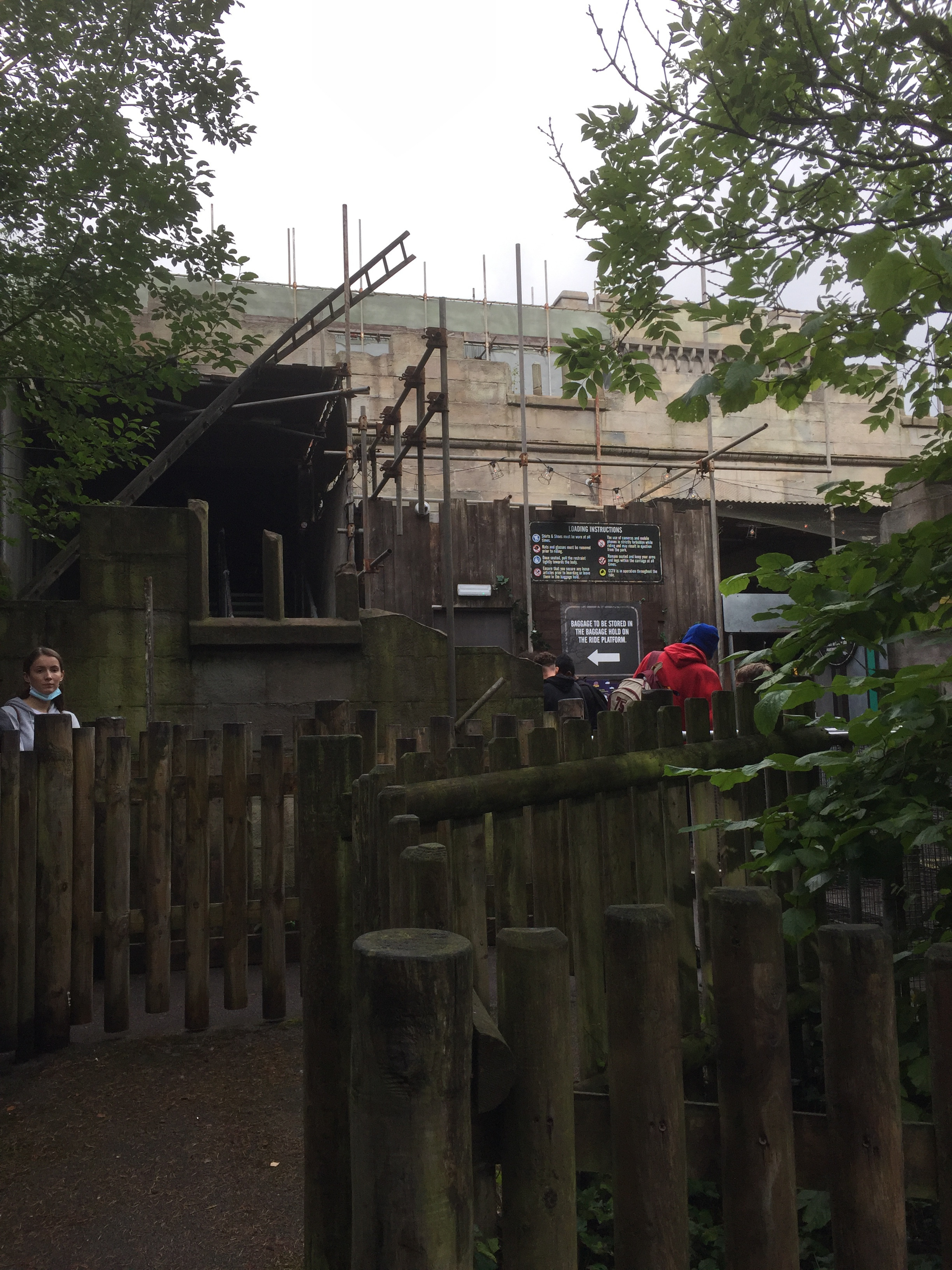 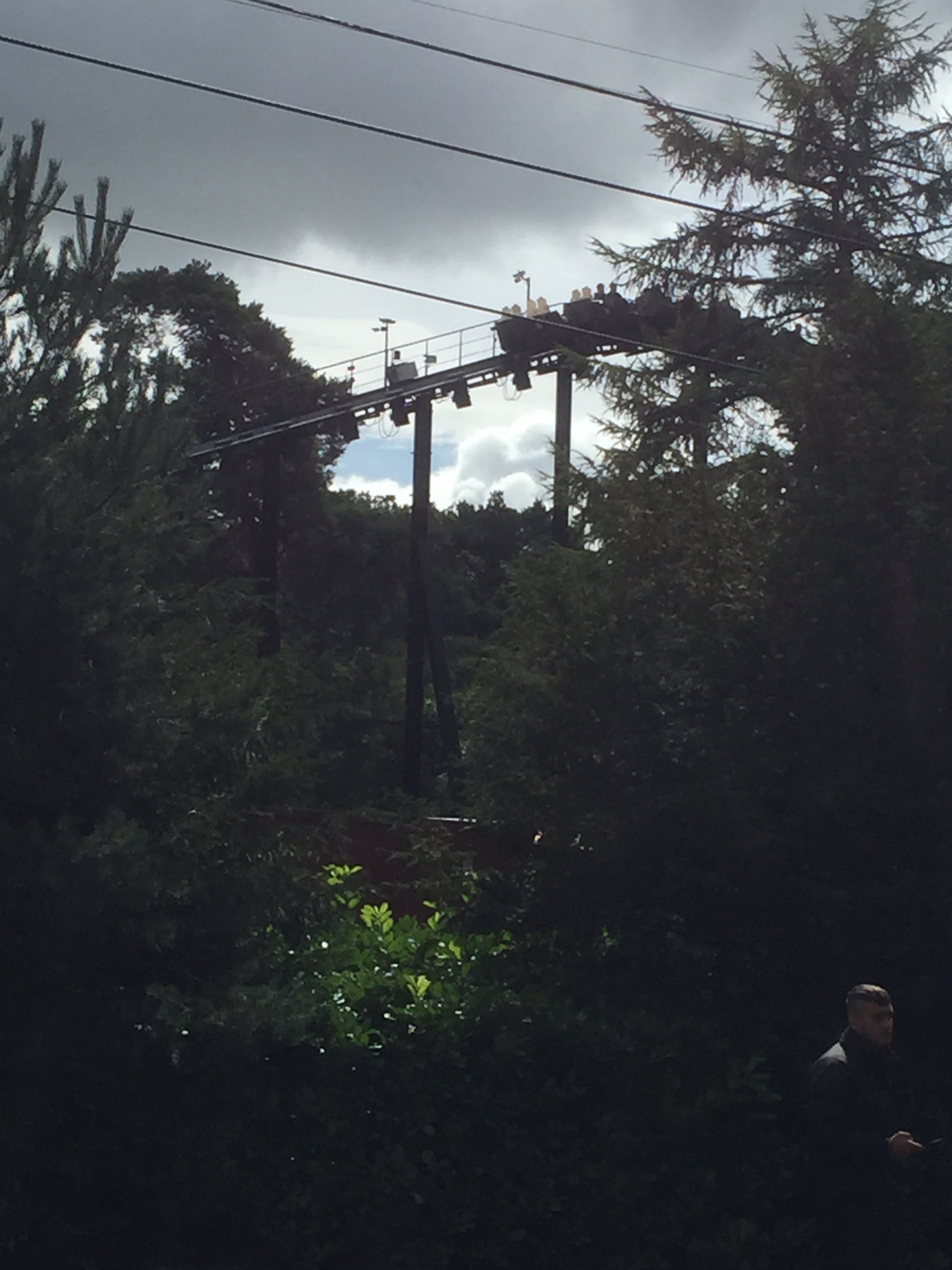 (My apologies; I struggle to get good photos of Thirteen due to the fact it’s mostly hidden from view until you’re on it)

After Thirteen, we headed into Fountain Square for something a bit different from coasters...
Hex: The Legend of the Towers
Hex was on a mere 15 minute queue, and we didn’t ride it last time, so we joined the queue for Hex. I was very intrigued to see how socially distanced Hex actually worked, because Wicker Man has not been running its preshow this year, and Hex’s similar elements do add a huge amount to it as an overall experience, in my opinion. So, how did socially distanced Hex work? Well, in reality, it was actually pretty similar to pre-COVID Hex, with the only real differences being that they now hold you outside the Towers and let you in in groups, and there are social distancing markers within the pre-show rooms as well as benches blocked off on the ride. In terms of Hex itself, I do always really enjoy it; I adore the overall ambience and experience it builds up, and the ride itself is a very clever illusion, in my opinion: 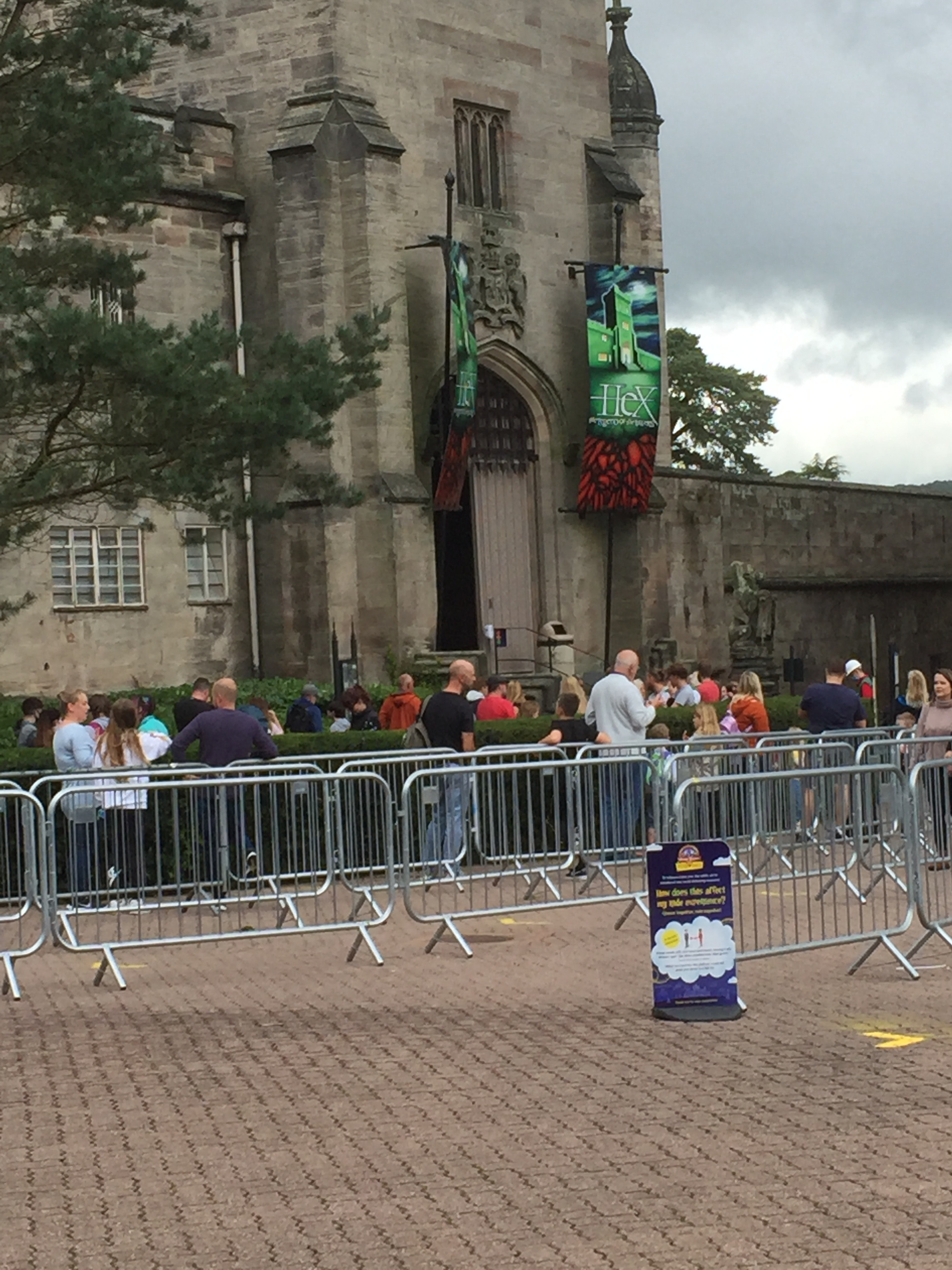 After Hex, we headed down to Katanga Canyon to take a spin on...
Congo River Rapids
Congo River Rapids had a 30 minute queue (one of the shorter queues at the time), so we decided to join. The queue did seem slightly longer than this to me, probably exacerbated by the fact that the ride did go down for a period due to the deep cleaning while we were in the queue. So, how was the ride? Well, it’s probably the wettest run I’ve had on Congo since the waterfalls were turned off, actually; it’s never seemed quite as wet since the waterfalls went to me, but there were a fair few good waves today; I actually got off fairly well, but my mum got drenched by one just before the RMT tunnel, and while it didn’t hit any of us, the “KFC Megawave”, as it’s often called, looked pretty wet! We also had a rather unique experience on it due to one of the kicker wheels at the end not working, meaning that the bottom of the final lift hill got rather congested, and we briefly floated backwards before getting bumped forwards by the boat behind us: 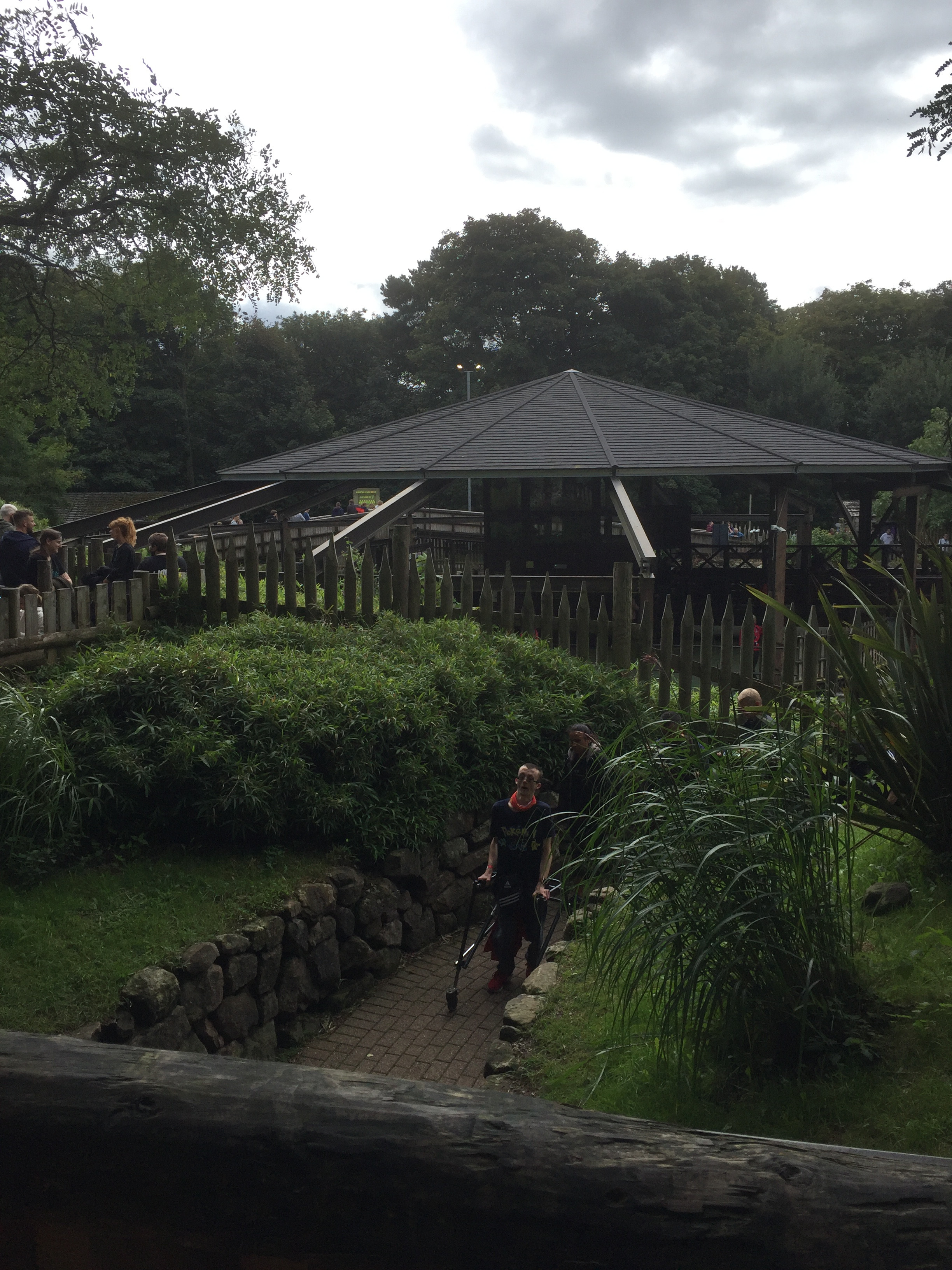 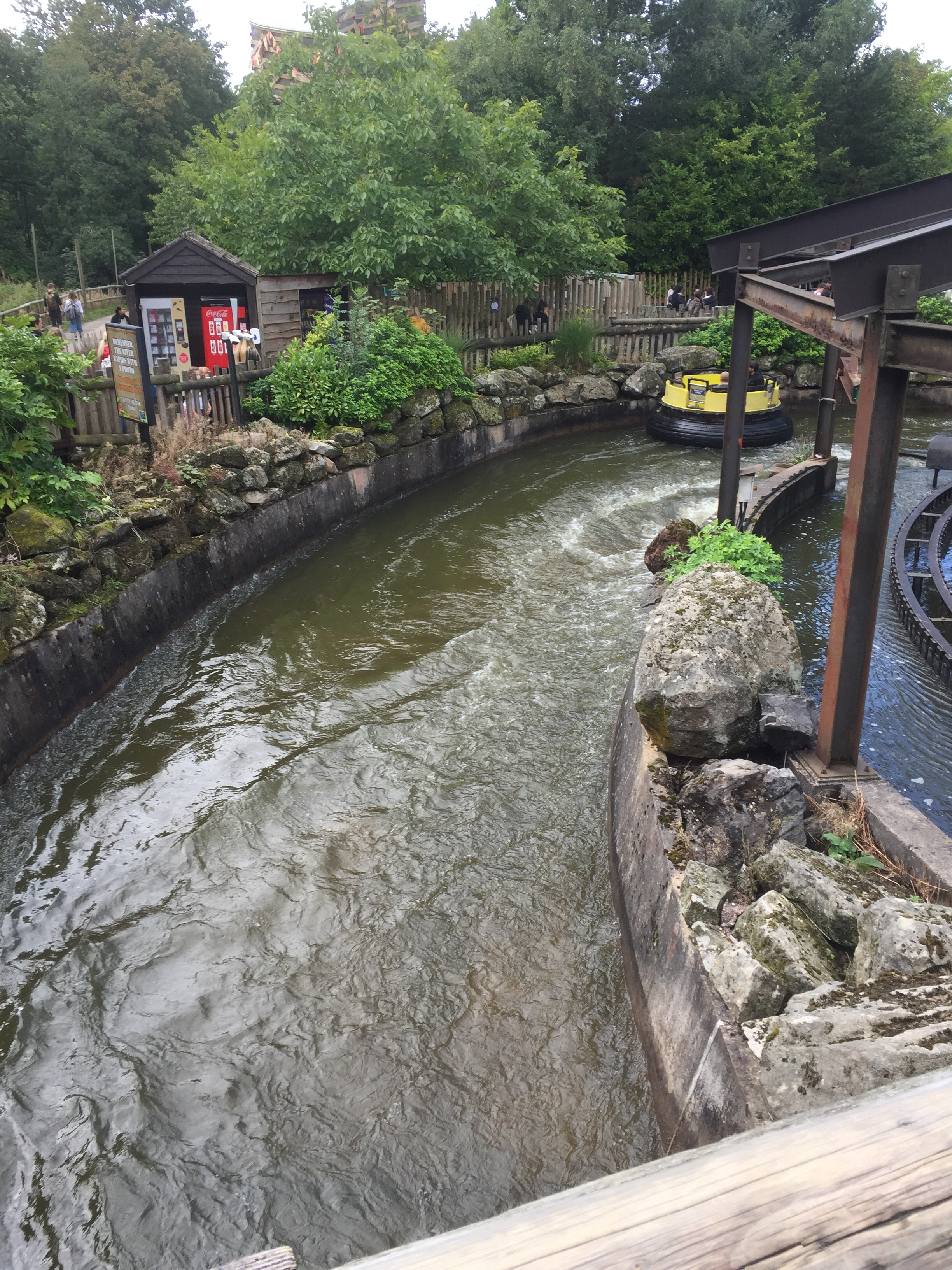 After the Rapids, we initially had the intention of riding Nemesis, but when we got over to Forbidden Valley, the queue for that, despite being advertised at 65 minutes, was stretching past Sub-Terra and towards Gloomy Wood, which didn’t bode well for its length. Galactica was also advertised at 120 minutes, so we instead headed towards the other side of the park, riding something slightly different en route...
Duel
The queue for Duel was advertised at a mere 10 minutes, so me and my dad decided to give it a go. The reason that I say Duel was “something slightly different” is because despite having visited Alton Towers many times, I’ve only actually been on it once (and from memory, that was all the way back in 2014). Since my last ride, a series of changes have been made; a change I particularly liked was the installation of computer generated paintings in the queue that follow you and change to spooky things when you look at them! So, how was Duel? Well, it was very good fun; there was a lot of scenery to look at while going around, with scares around every corner! Not being too familiar with Duel as a ride, it certainly got me a few times! In terms of our scores, I fared rather poorly, with a score of 3,100, while my dad did fantastically with 33,200! On the whole, I did enjoy Duel (even if it did make me jump quite a few times), and it was nice to get back on something I don’t do very often at Towers: 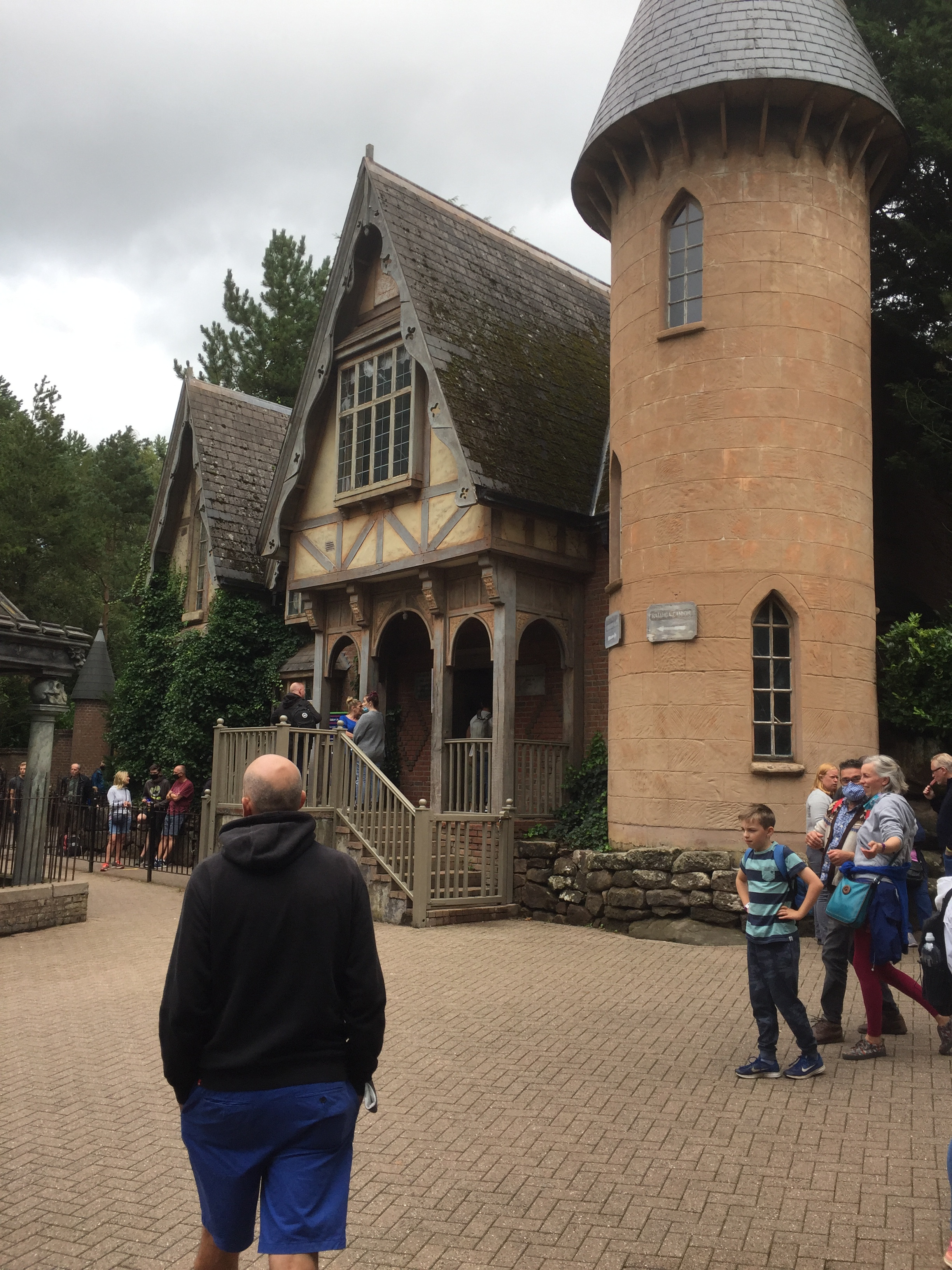 After riding Duel, we headed over to X-Sector to get on...
Oblivion
Oblivion was on an advertised 60 minute queue, so we decided to join. I hadn’t actually ridden Oblivion since September 2018, despite it being a ride I rather enjoy, so I was excited to get back onto it. In a much-valued bonus, the queue actually ended up only being around 20-25 minutes! So, how was the ride? Well, it was very good fun; the drop gives a phenomenal sensation of speed, and the ride also had two decent pops of airtime, which I really enjoyed! Overall, it definitely grew on me compared to my memories of my last ride; it was really good fun: 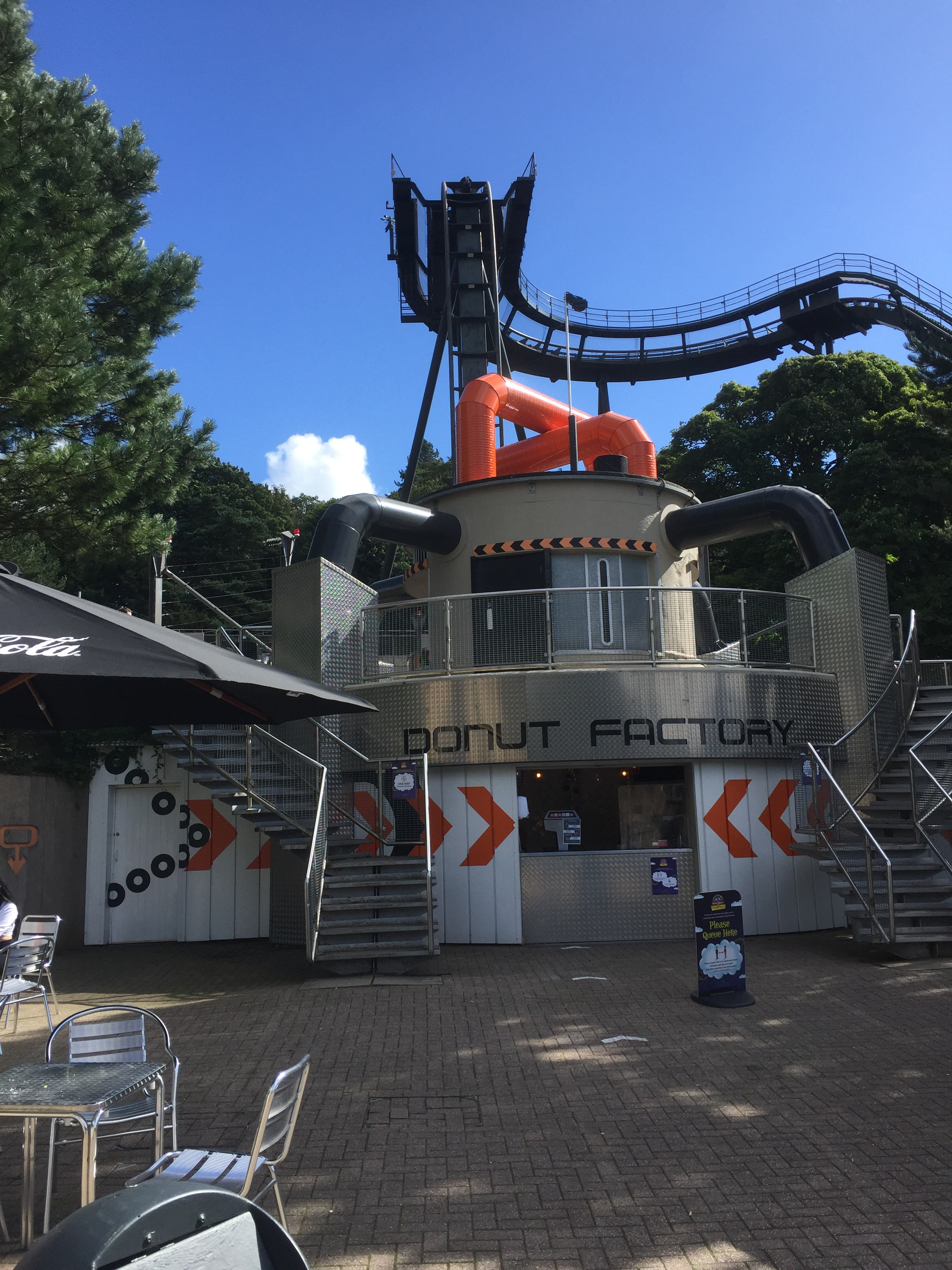 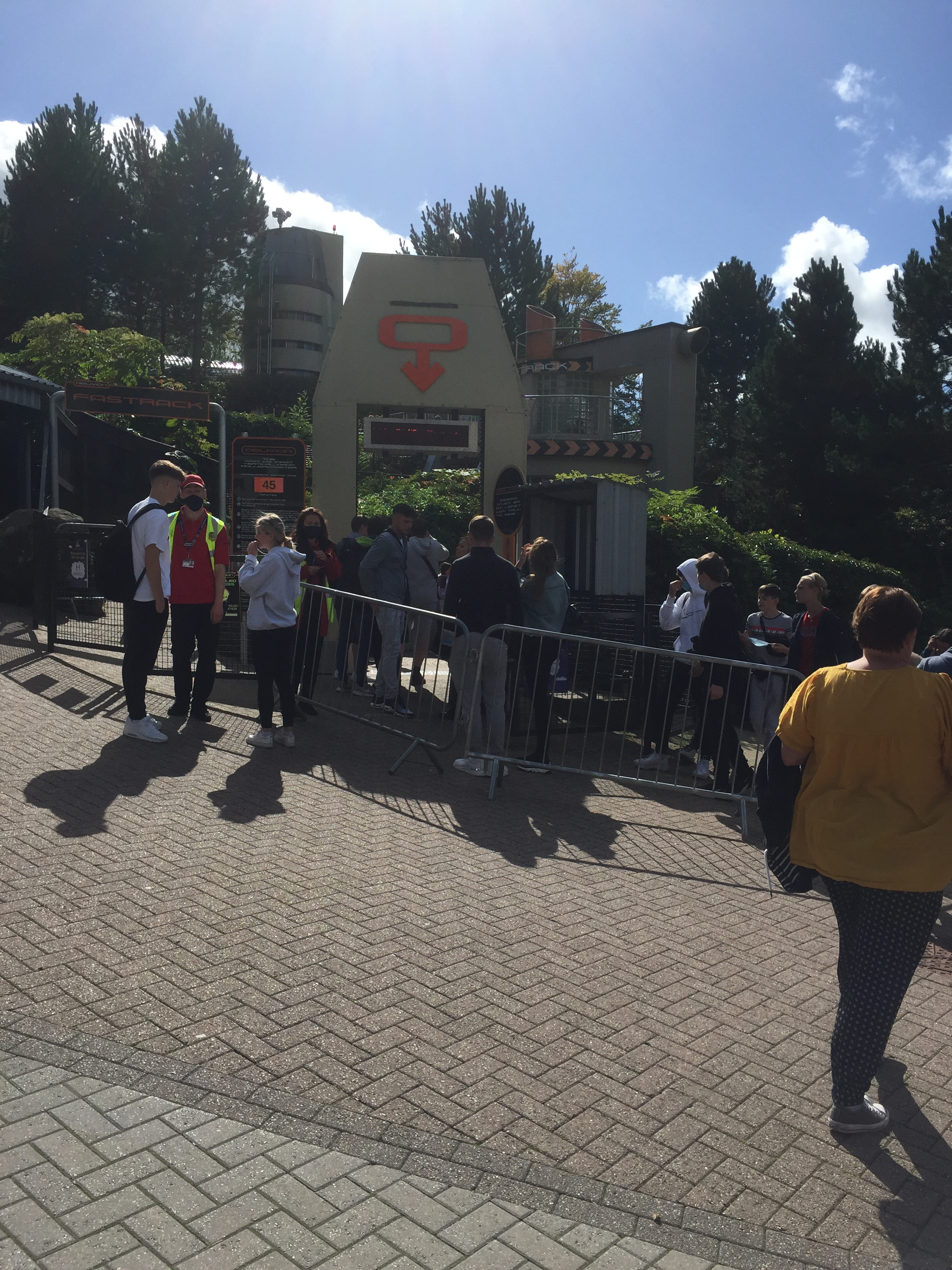 So there ended our day at Alton Towers! We definitely had a nice time (if a little busier than our first visit); I have to admit that some things were a bit up and down reliability wise throughout the day, with certain things going down for periods, and the queues were quite long, but that didn’t inhibit our enjoyment too much, as we still got a decent ride count of 6 in today, including some things I hadn’t done in a while or wouldn’t necessarily do on a regular day, which I really enjoyed!

I hope you enjoyed my trip report today, and I look forward to writing the next one for you all, which will likely be from Legoland Windsor on 4th October!

Great Trip Report! It's a real shame that wickerman was shut, Duel, dispite it's flaws I have always loved it. Discounting Valhalla it's my favourite dark ride in the UK. I'd be pretty miffed if I had to wait 45 minutes for thirteen, but I suppose you have to make the most out of the situation.

Good to hear you had a good day dispite the reliability issues.

Good work, Matt. ?
Any idea why Wicker Dude was closed? Is it busted again?

Howie said:
Good work, Matt. ?
Any idea why Wicker Dude was closed? Is it busted again?
Click to expand...

Apparently Wicker Man is shut due to some kind of problem with the stretch just before the first wicker man pass through. There’s been a tent put up around it, and apparently audible construction noise can be heard, so apparently they may even be having to rebuild that section from scratch.
You must log in or register to reply here.
Share:
Facebook Twitter Reddit Pinterest Tumblr WhatsApp Email Share Link
Menu
Log in
Register
Top