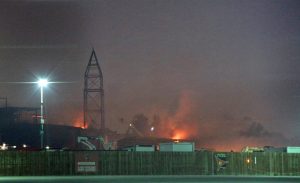 December 14, 2016 – A raging fire broke out overnight at Farrari Land, PortAventura Park’s 807,300 square feet (75,000 sq/m) sister park scheduled to open on April 7, 2017. No injuries were reported and the full extent of the damage caused by the fire is not immediately known, but there was extensive damage to several structures including the Venetian Campanile and Ferrari Experience buildings as well as one of the two S&S combo drop towers.

In a statement, the park announced that the cause of the fire is under investigation and the incident will not affect the park’s opening date. However, with the extensive damage to at least three attractions it is highly doubtful that it will open with the full lineup of rides. On the positive side, no damage was reported to the record breaking Intamin launch coaster.

Read more and view additional photos of the fire in our Forum discussion.